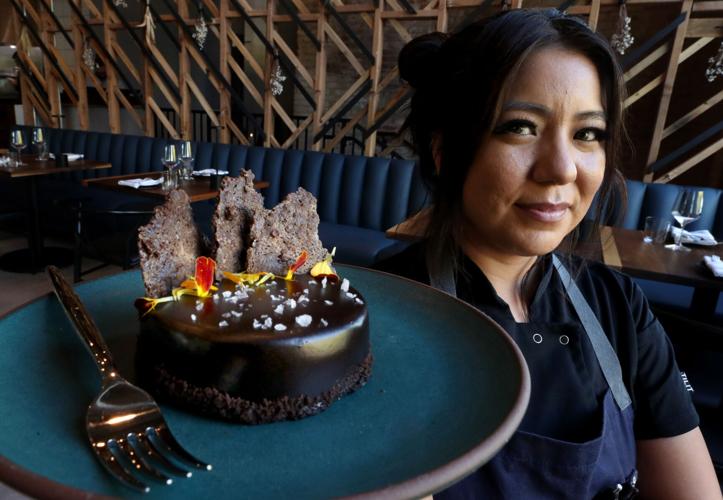 Kayla Draper, pastry chef at Bata, poses for a photo at the restaurant, Tucson, Ariz., April 29, 2022, with one of her creations: a toasted white chocolate cake, a sourdough brownie crust and edible flowers. 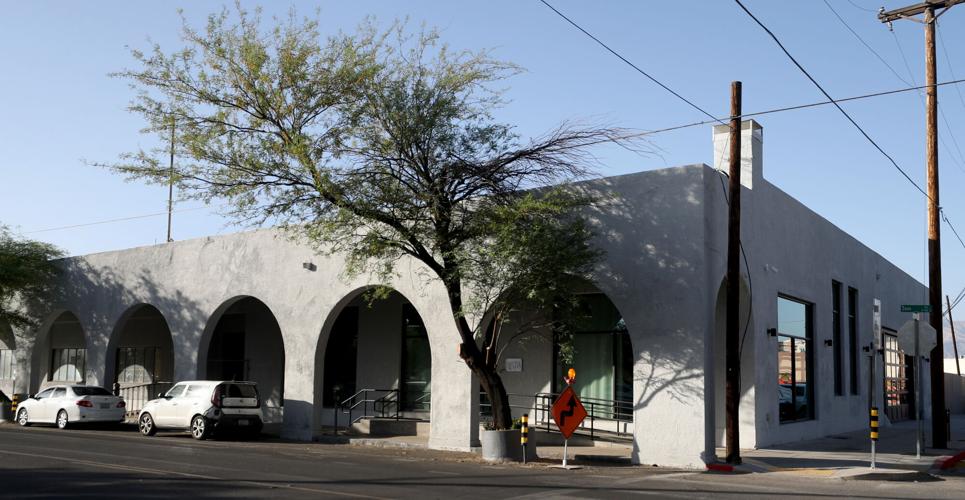 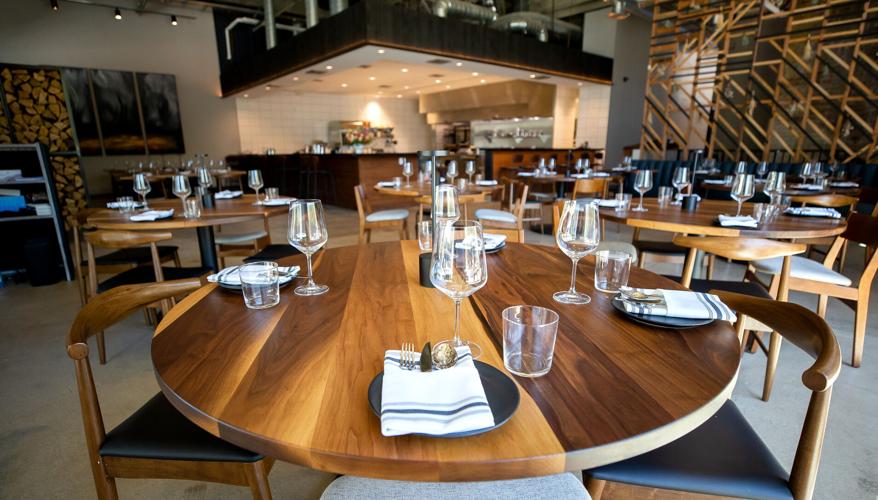 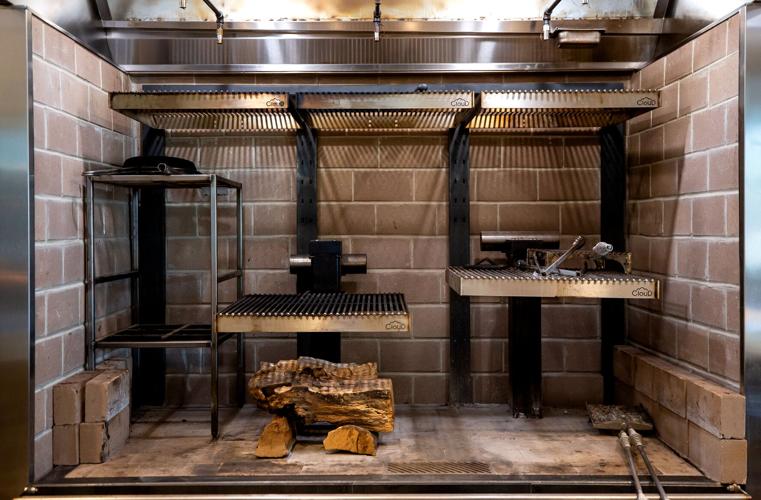 Kayla Draper, pastry chef at Bata, poses for a photo at the restaurant, Tucson, Ariz., April 29, 2022, with one of her creations: a toasted white chocolate cake, a sourdough brownie crust and edible flowers.

Editor's note: This story was originally published in May 2022. We're republishing it in September 2022 because Bon Appétit recently called Bata one of the 50 best new restaurants in the country. 🎉

Disney Parks are some of the most meticulously engineered places in the world. Everything from the roller coasters to the scent pumped into the air through the entrance of Pirates of the Caribbean ride are designed with purpose. The toil that creates the immersive experience is banished to underground tunnels, closed-off kitchens and mechanical maintenance rooms behind the scenes.

The fantasy resembles real life, if everything was made with intention. You have entered a machine created and managed at every level to induce pleasure. If you’re good at suspending your disbelief, ignoring the toddler crying, appreciating the set as you wait in an hour-long line, the place offers a different way of being, as mystical and absolute as a dream.

Kayla Draper, the pastry chef at Tyler Fenton’s new venture Bata, 35 E. Toole Ave., fell in love with baking on a walk through Disney, where she worked on an internship after attending Le Cordon Bleu in Scottsdale — for culinary arts, not pastry.

“I live in my own little world,” she said. When walking past a bakery at a Disney park, surrounded at every turn with charming images and scents like magic spells, she smelled a confection that transported her into another world entirely.

When people eat her desserts, she said, “I want people to experience that whimsy.”

Bata is not entirely unlike Disney. The street-facing walls are all glass, and in the Tucson sun reflect whatever image crosses them. You don’t know what is inside until you cross the threshold and are immersed.

Built around the central hearth, the smell of wood smoke permeates the renovated warehouse. Upon leaving, your clothes will smell like a campfire.

The restaurant’s name is short for “robatayaki,” or the Japanese art of cooking over fire.

The high ceilings and attached air vents are painted black. Employees also wear black, even Draper, who identifies her off-duty style as a “‘70s foxy mama.”

“I dress like a rainbow,” she said. Her favorite dessert matches — vanilla ice cream with rainbow sprinkles.

Bata’s kitchen is open and visible like a stage, except for Draper’s rear office, a small corner with no windows and clear boxes of foods like beet sheets and toasted white chocolate are stacked to the ceiling.

There, she works with fellow pastry chef Savannah Sandate and sometimes with the chef de cuisine, David Solorzano. Draper always credits her collaborators: Sandate came up with last week’s sorbet flavor, celery, out of surplus ingredients. Draper’s favorite dessert of late, the ice cream, infused with leather aroma and topped with menthol whipped cream, she made for a party celebrating the leather anniversary of Reilly’s head chef (who smokes menthols), Solorzano helped come up with. The dessert’s unconventional flavors create an atmosphere that can transport the diner.

Bata’s menu, including its desserts, changes every few days or weeks. In an age where Yelp reviews and menu previews are widely available, Bata offers no such information online. You won’t know what will be on the menu until you get there.

Sorbets will be one of few constant features, though the flavors will rotate. Draper said they wanted a regular vegan option on their dessert menus, and sorbets are refreshing. The night we spoke, the flavor happened to be grapefruit, topped with lemon granita and honeycomb, like Met Gala Pop Rocks.

While Draper was experimenting with panna cotta recipes for an upcoming menu, the dessert of the moment is a mousse cake that uses white chocolate in several ways. While the cake is coated in dark chocolate and adorned with tiny edible flowers, the pillowy interior is a taupe color, made when white chocolate gets toasted. The asteroids on top are white chocolate, too.

I can only speculate why Bata hired Draper: her technical skill, her experience, her ability to handle the pressure. I suspect, though, it has something to do with the stunning, alien uniqueness of her creations. When you experience one of Draper’s desserts, you’re stepping into her world.

Draper discovered her love of cooking at home — helping her mom, aunts and grandmas in the kitchen. “I grew up in a very traditional Navajo household,” she said. Despite cooking from an early age and eventually attending culinary school, Draper is a self-taught pastry chef.

“I started as a line cook,” she said. “I thought I wanted to do savory.”

One day, her restaurant’s pastry chef was out. The chef believed Draper could take on the position. “It was horrible,” she said. “There was so much I didn’t know.”

But she had a knack for it: she stepped up and took on the role full-time.

For two years, she learned through trial and error and YouTube tutorials on technique. She practiced until she could tell just by how something looked or moved whether it was baked properly.

When a corporate pastry chef came in to supervise her work, she finally learned tips she didn’t know from her time at savory culinary school. “If you let sugar and salt and eggs sit together for too long, the sugar and salt will start to cook the eggs,” she said.

As she taught herself, she found inspiration closely following hashtags and inspirational Instagram accounts. One chef in a Dubai resort would answer direct messages she’d ask about techniques. Now Draper has been a pastry chef for almost (she said only) nine years. She looks at her creations and thinks, “Damn, I did that?”

Her creative process is improvisational. Many of her favorite desserts start with a suggestion: a surplus ingredient, a theme like fireside or leather. She experiments until something clicks: even if it’s a mistake.

For her latest dessert, “I accidentally left the white chocolate in the oven for too long,” she said, of the charcoal-like toppings for the toasted white chocolate cake. “It turns out, it was delicious. That was the missing piece.”

She incorporates Bata’s hearth wherever she can. She infuses charcoal embers in cream for panna cottas and caramels and smokes ingredients like almonds and dates to bring out a new depth of flavor.

She gives a new life to surplus ingredients: last week, a chef made too much miso, so she tasted different combinations until one stuck, in the form of butternut miso ice cream on the dessert list at the time of our interview. The butternut lends an orangey color and fragrance that harmonizes with miso’s umami.

“Every time we make a dessert, we give it to everyone [on staff] to taste,” she said. Family-style staff meals at 3:30 p.m. are off-menu labors of love, catering to everyone’s dietary needs and restrictions.

While the kitchen is on display at Bata, it’s usually the place where the exhausting work happens unseen by customers, to create a unified, illusive, experience in the front-of-house.

I found out about Draper when I asked who made the exquisite crullers at Flora’s Market Run, her former employer. The work behind a perfect bite at Flora’s, on a misted patio, cappuccino in hand, initially started, for Draper, at midnight.

“I’d wake up at 10:30 p.m.,” she said, “I had to get gussied up, eyelashes, eyeliner.” Slowly, she changed the schedule so she and her assistants wouldn’t have to do that. “I wanted to make it a happy environment,” she said.

Now that Draper is at Bata, she is no longer nocturnal. She has found time for hobbies: she is learning Chinese, a language she fell in love with as a child watching kung fu movies with her dad, and, as an adult, with fantasy TV series like “Ashes of Love.” Draper also started taking krav maga classes. A morning person, she now has time to enjoy the early Tucson sun with her pet bunnies.

“I'm totally grateful,” she said. “Life is beautiful. And I get to work with sugar.”

Her favorite pastimes, though, transport her into fantasies. Disneyland. Electronic music festivals. Happy hour, tacos and drinks at Calle Tepa. The beginning of the monsoon season in Tucson, when creosote spikes the air. She looks at the world, questioning, “What is after that? What could be?”

New restaurant Bata, from the owners of Reilly Pizza, brings a fire-kissed menu to downtown

Meet 14 Tucson restaurants that opened this winter 2022! The Parish's sister restaurant, The Delta, opened in January. Chef Tyler Fenton, of Reilly's, just opened wood-fired BATA. The owner of Ceres is opening Noodies in Bentley's former location. And vegan baker Houlden's Rise Above is finally getting a brick and mortar!

Having a bad day? Try these 7 heavenly comfort foods in Tucson

Looking for a pick-me-up? When nothing else seems to do the trick, sometimes we find the comfort we need in food. Here are 7 deliciously indulgent options for comfort food in Tucson.

Tucson Games and Gadgets is a board game store with a secret: the Short Rest Tavern, a bar where you can get 25 different varieties of mead and play a Dungeons & Dragons campaign at the same time.

Turkey tacos are back: After a six-year closure, Tooley's Cafe is now open again

Sullivan's Eatery & Creamery is closing. Get your burgers and ice cream soon.

After the COVID-19 pandemic's perfect storm, the 45-year-old restaurant that started out as an outpost of Swensen's will close no later than June 15.

A new Latin-fusion restaurant is coming to downtown Tucson

Tabu will have a mixologist-driven cocktail menu and dishes that borrow influences from Mexico City and south of the border.

The owner of Penca will be opening a new venture, a classic American eatery, in the space that has housed Ten55 Brewing in downtown Tucson.

Bento cakes fit in one hand and are intrinsically aesthetic. Home baker Christa Lebron, under her business Chez Peachy, brings these colorful jewelbox cakes to makers markets and pop-ups across Tucson, Arizona.