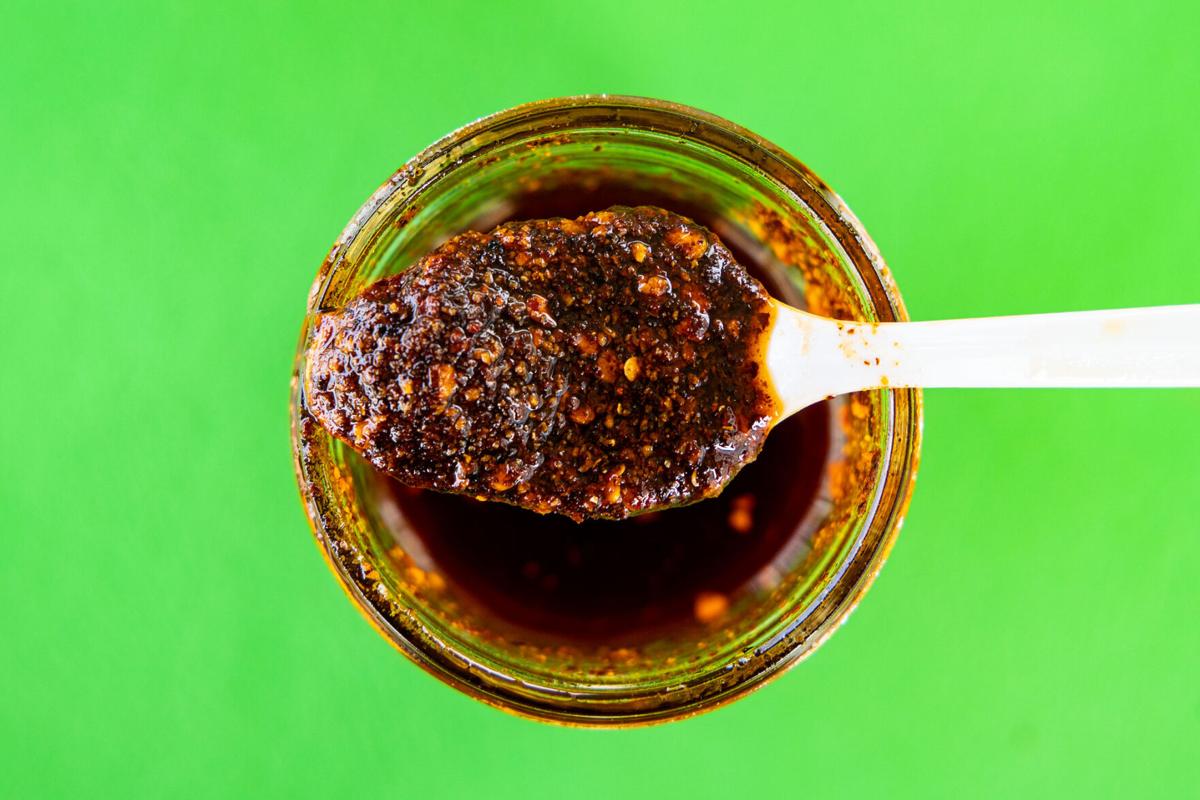 The salsa de aceite, or oil sauce, at Carnitas el Michoacano on Oracle Road is packed with finely crushed chiles swimming in oil. 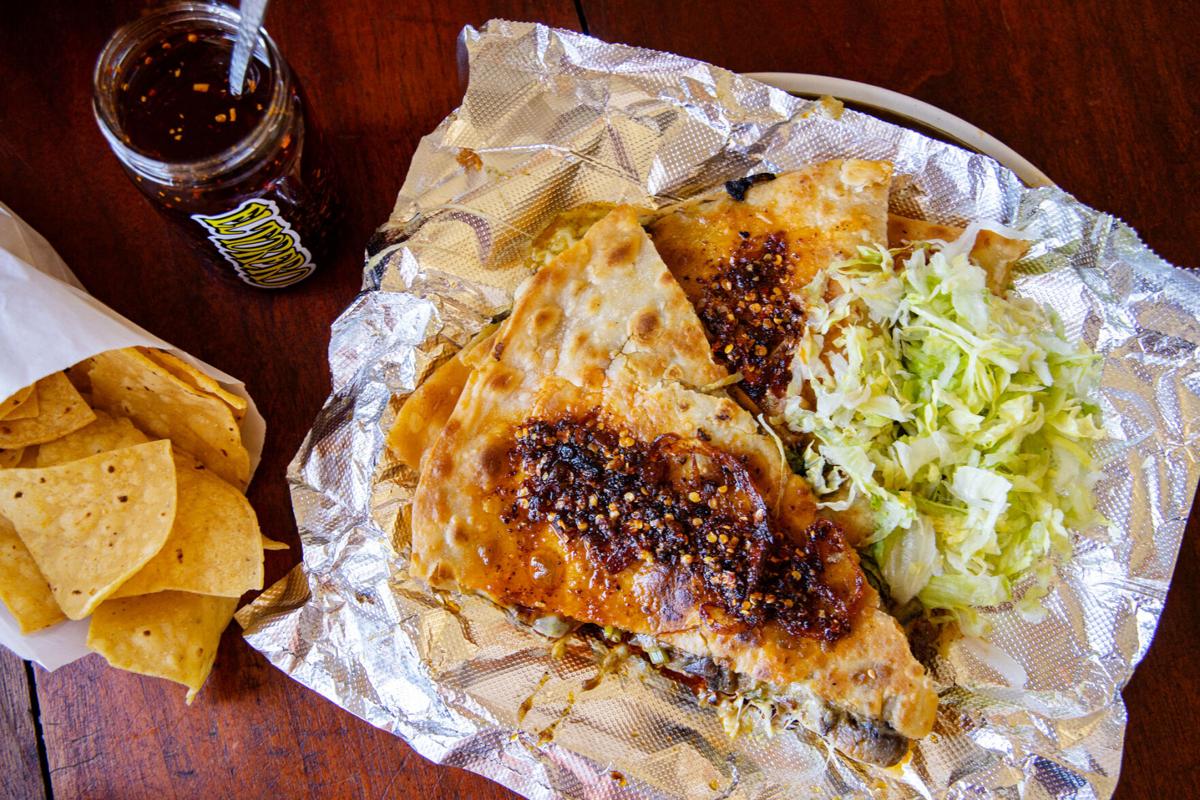 El Torero is using its housemade chiltepin chile crunch on various items on the weekly specials menu. Here, it's on the tomatillo shroomdilla, $12. 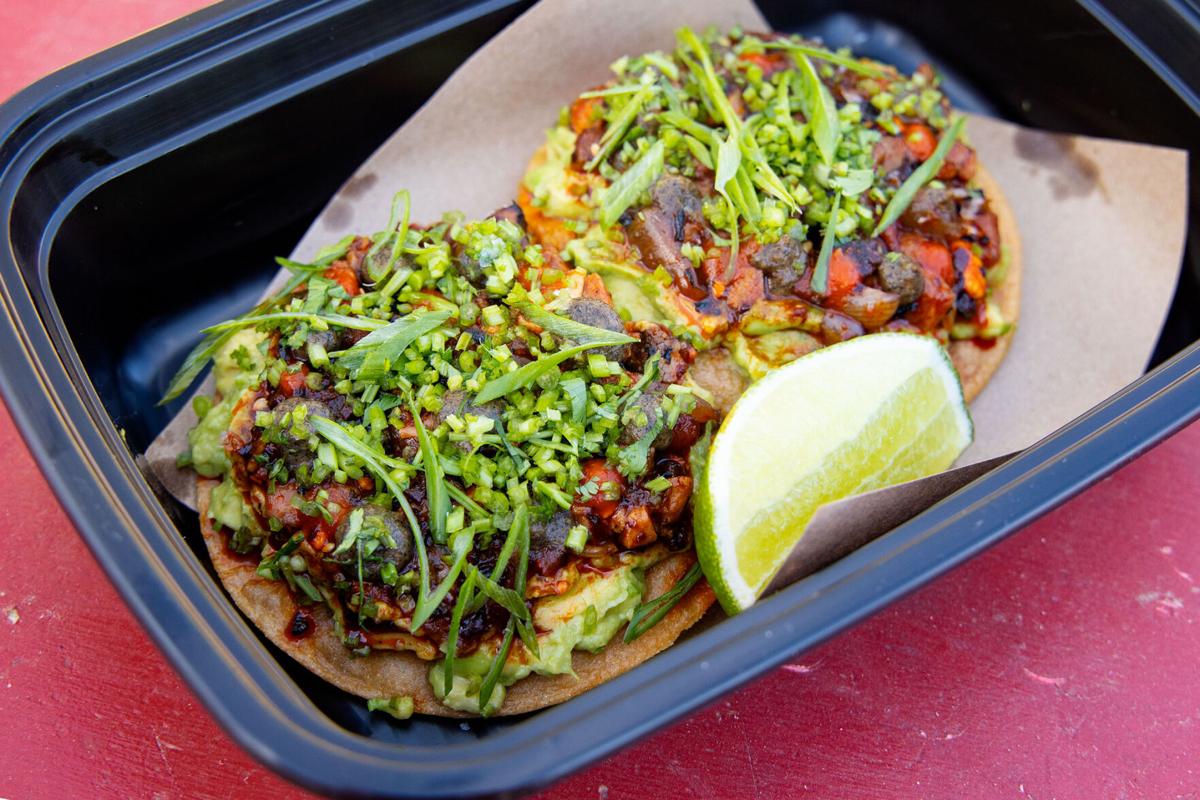 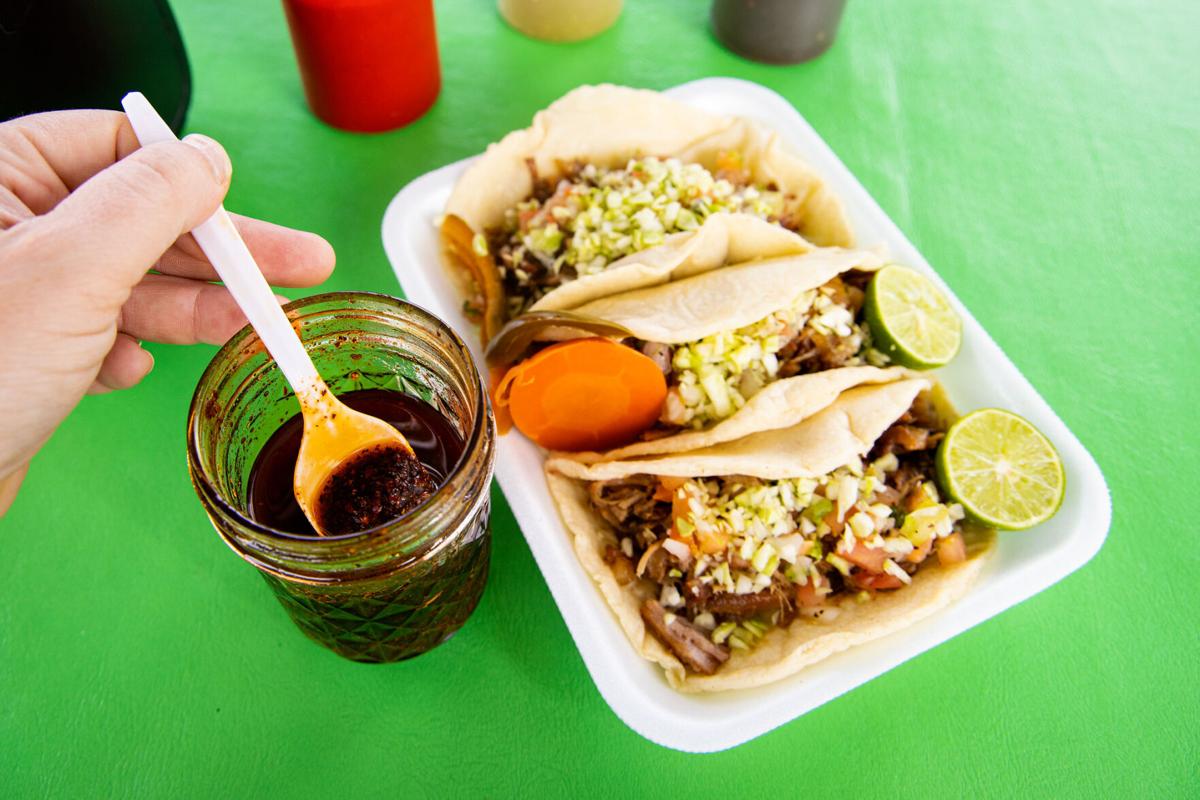 Mixed carnitas tacos with cueritos at Carnitas el Michoacano come with a side of chile-based salsa de aceite. 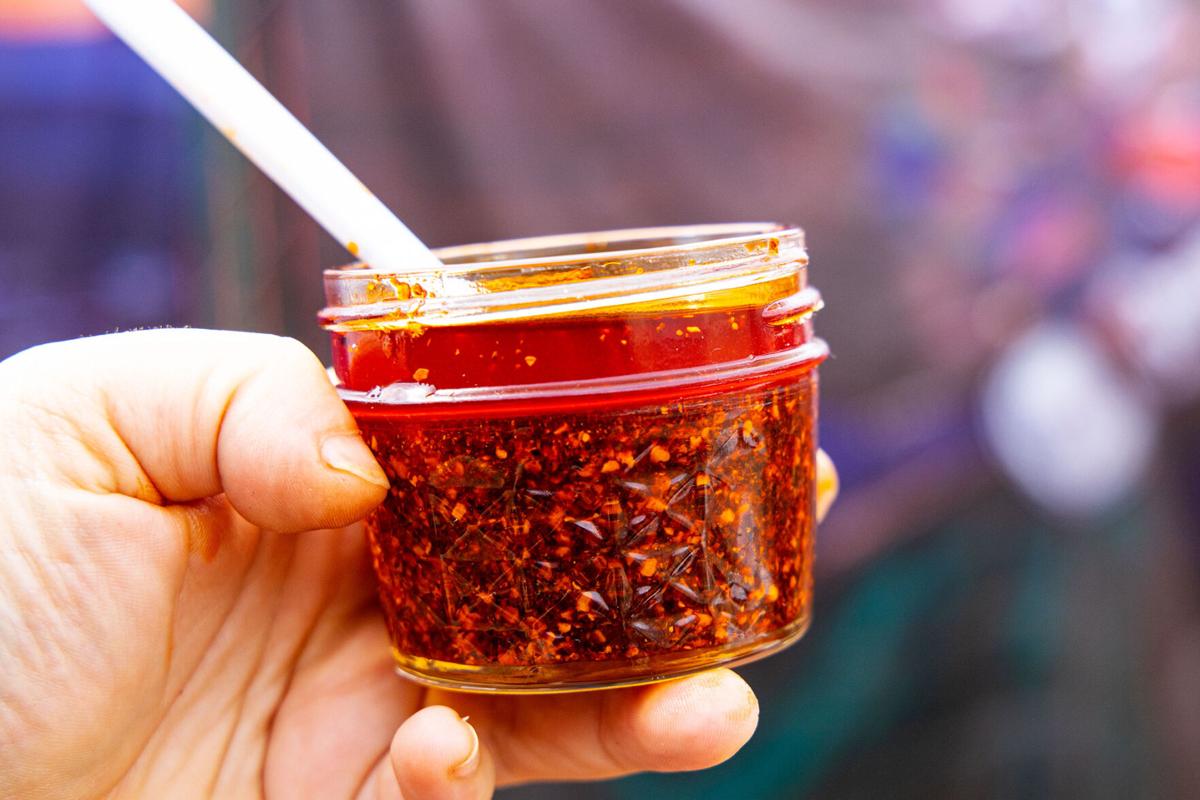 El Antojo Poblano sells jars of its salsa de aceite for $5 apiece. They're 🔥. 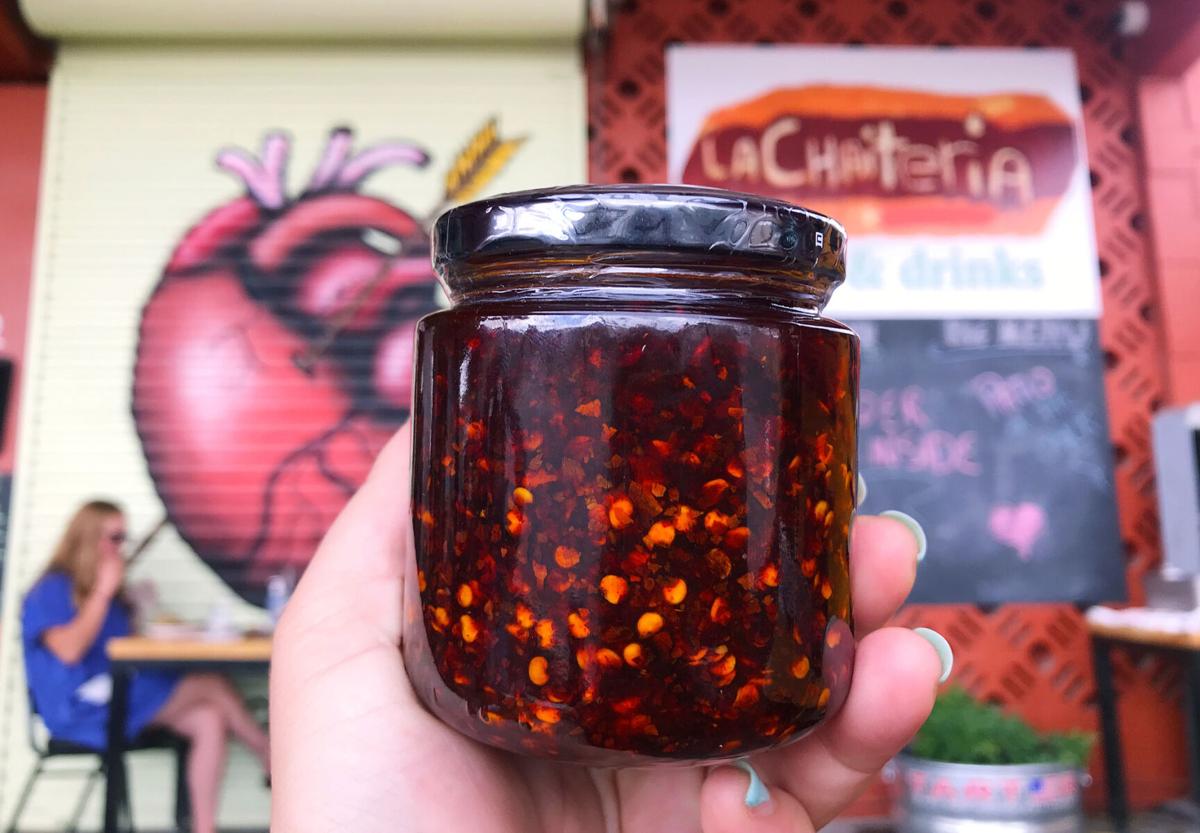 Some of us remember a time when we had space in our fridge; Before it became a museum of fried chile products from all over the world. It was a simple time, before the obsession started, when food tasted delicious but somehow not crunchy enough. And everything lacked that lustrous oil, staining your fingers with its beautiful red hue.

Let's call that era B.C.C.: before chile crisp. The life-changing condiment has been around for centuries, but most people around here can remember the first time they tasted it. Maybe it was given to you by an overzealous friend (perhaps me) who insisted you had to try some of that peppery Chinese lao gan ma on your noodles. Or maybe you saw the fiery condiment on Instagram, where it's been trending hard for the past year. Celebrity chefs like David Chang have been repping their own brands as an income supplement to offset pandemic losses. Some of these jars command high prices, like $32 for a two-pack, and have fancy names like oo’mämē.

Now if you don't mind me playing historian for a second, I'd like to add a second era to the timeline: B.M.C.C., before Mexican chile crisp. We are currently moving out of this phase and into a new era where you'll start to see everything from tacos to mesquite-grilled octopus covered in this sensational, seedy sauce. This chile oil called "salsa macha" or "salsa de aceite" among other names, has long been a traditional element in the Central Mexican cooking of Veracruz and Michoacán. But now it's gaining prominence in the food world, and is popping up on all kinds of menus across Tucson.

Local chef John Martinez first tasted it when he was working in New York City, and a coworker brought some up from a mercado in his hometown of Mexico City.

"It was straight up chiltepin (pepper) and sesame," he said. "You had to be macho to eat that macha."

He later learned to prepare the fiery sauce from one of his cooks at the Manhattan restaurant Super Linda, a woman named Letty who was originally from Veracruz, Mexico. She made it with morita chiles, a smoked and dried version of the red jalapeño, which brought a nice heat and smokiness to the crunchy sauce. After he learned the technique, he started to put the "Mexican umami" on everything, from scrambled egg tostadas to roasted duck with sweet potatoes.

He's had salsa macha on the menu since he opened his midtown bistro Tito & Pep in 2018, and uses it on several dishes including his carne asada steak tartare tostadas, a masterful mix of French and Sonoran cooking. (Seriously, you gotta eat this one.) He uses three different types of chiles — ancho, guajillo and morita — toasting them and marrying them together in oil with golden garlic, sesame seeds and crushed peanuts. Unlike some other varieties, his salsa macha is not overtly spicy, but the flavor is round and smoky with a hint of char. And with that zingy garlic, it's a perfect foil for the buttery avocado.

Tito & Pep doesn't bottle its salsa macha for take-home cooking, but many other places around Tucson do. South Fourth Avenue's El Torero started bottling a chiltepin chile crunch to sell through local food distributor Pivot Produce. The sauce was a hit, and now Chef Michael Hultquist Jr. is putting it on his weekly specials menu and beginning to sell it at the store.

Out on the west side, the trendy Congress Street cafe La Chaiteria sells zippy jars of salsa macha for $10 apiece, bottled under the name Sabor es de Mexico. It's a full-frontal mouth burn that assaults the tip of your tongue and then builds into a throat bomb of pure pepper. But the crispy peppers taste wonderful on the restaurant's vegan jackfruit tacos, which have a touch of sweetness to them.

Down the road and around the corner on St. Mary's, the Puebla-based food truck El Antojo Poblano sells a smaller jar of housemade chile oil for $5, with a cute blue label that says "thank you for your preference." Owner Analy Guzman says she started jarring up her salsa de aceite (oil sauce) in response to the pandemic, because it was more sanitary than having a salsa bar.

Her sauce, which she learned to make from her mother in Puebla, is more garlicky and has a fresh grassy flavor from the thin chiles de arbol that she uses. I took a jar home and dripped it over my Passover matzah ball soup, which wasn't exactly traditional but tasty nonetheless.

"It's not that popular in Puebla, but we always had it on our table," she said. "When we're eating breakfast. You can eat it with eggs, tacos, whatever food you eat."

These options are all on the newer side, but it's important to note that a handful of Michoacán-style carnitas joints have been serving the condiment in Tucson for several years now. While salsa macha originated in the coastal state of Veracruz, in Michoacán it goes by the name salsa de aceite or chile bruto, says Mexican food historian and writer José R. Ralat. This version doesn't contain nuts, and the chiles themselves are often ground to a finer consistency.

This is the case at the neighborhood food truck Carnitas el Michoacano on Oracle Road just south of Fort Lowell. The chiles have all settled at the bottom of the jar, forming a thick jelly that you have to mix up with your spoon. But when they land on your taco, the peppers have the texture of crispy hot sand, which flows around the fatty carnitas and soft mounds of pig skin.

Owner Irma Denicez says that the sauce is a popular condiment because it adds a little spice to the rich pork that her home state is known for. Her grandma's secret recipe is so important to the carnitas that she has to make it every two or three days, along with a handful of other homemade salsas like the charred black salsa tatemada. Together, they form a symphony of sweet crunchy chile.

"For me, it’s what is umami. It’s true savory, the thing that makes you want to keep eating more," says John Martinez. "It’s like eating peanuts at a bar. ... As you move into machas that are all about the heat, it delights chile heads. They can get the endorphin rush from the heat. With the oil, the way it coats your mouth as you chew whatever you’re eating, working its way in there. It gets addictive."

Where to get it

She's heading up the kitchen at El Mezquite, which serves Mexican and Latin-influenced dishes with a gourmet touch. The restaurant is at the DoubleTree Hilton next to the Tucson Convention Center.

This Tucson chef will be the first contestant from Arizona during the show's 18 season run. Watch the show tonight at 5 p.m. on Bravo.