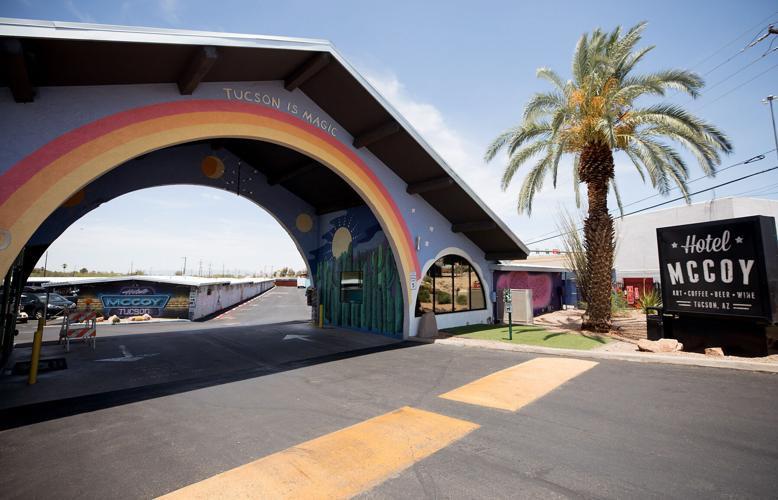 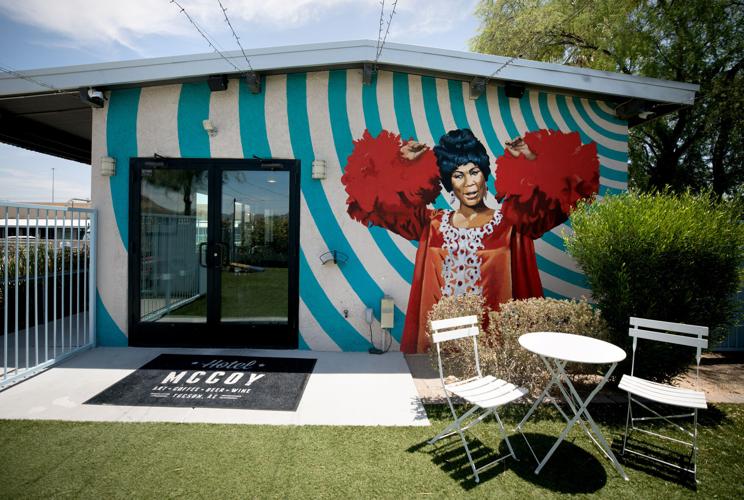 A mural of Aretha Franklin adorns an outside wall at Hotel McCoy. The mural was created by Alley Cat Murals. 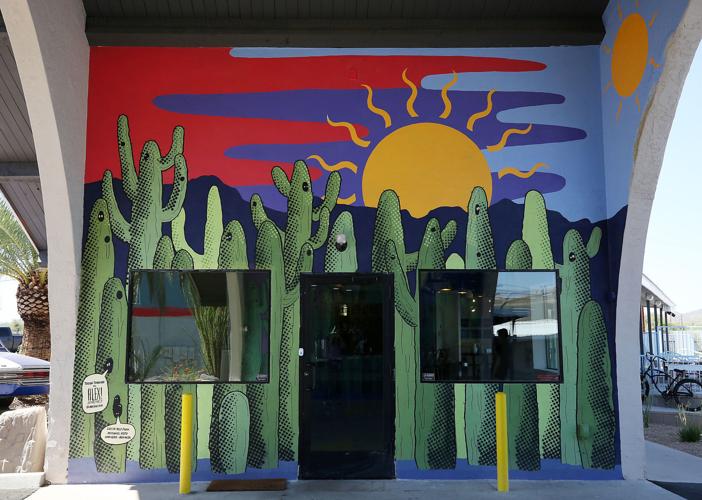 Alex Jimenez, a local Tucson artist, painted the wall outside of the main lobby at Hotel McCoy, 720 W. Silverlake Road, pictured here in 2018. 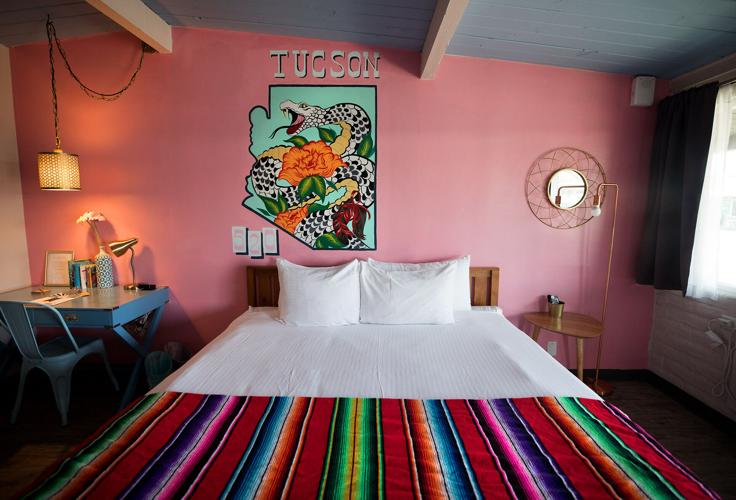 Jessi Moreno-Rosas' artwork adorns the wall in one of the guestrooms at Hotel McCoy. 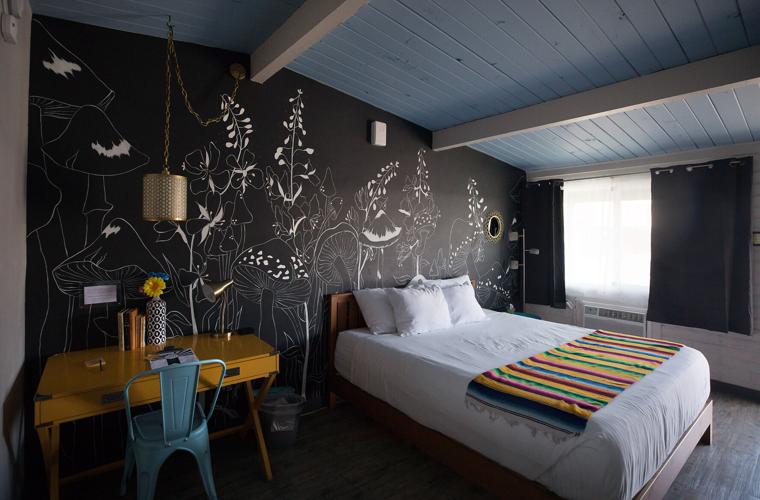 Artwork by Elisha Lenhert, also known as "Something Wonderful," adorns the wall in one of the guestrooms at Hotel McCoy. Lenhert is the hotel's creative manager. "Elisha Lenhert has done a great job at taking what I started and really growing it and refining it — she’s had a huge impact on not only continuing what we started but taking it to the next level," hotel president Nicole Dahl says. 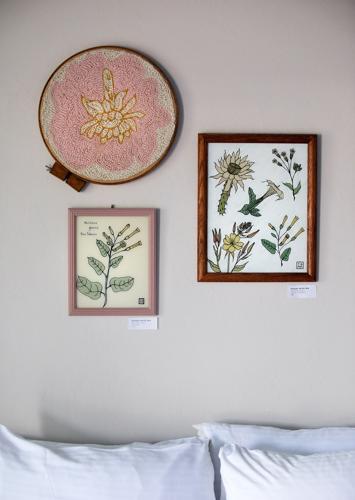 Artwork by Trevor Mock, also known as "Sonoran Witch Boy," adorns the wall in one of the guestrooms at Hotel McCoy, 720 W. Silverlake Road, on July 21, 2022. 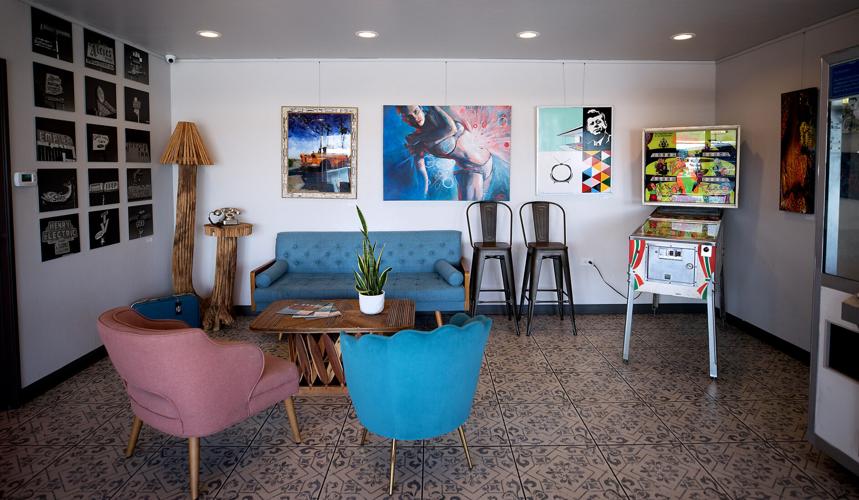 Artwork from local artists are on display at Hotel McCoy. All the artwork is for sale, and the hotel does not take a commission. 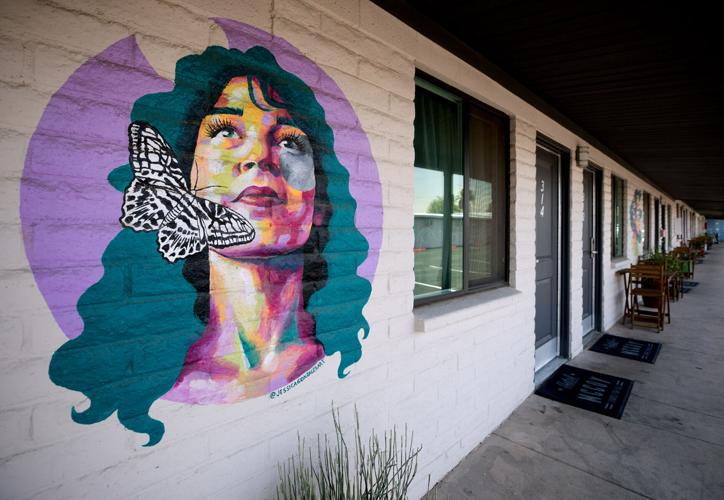 Smaller murals by Jessica Gonzales line one of the outside walls at Hotel McCoy. 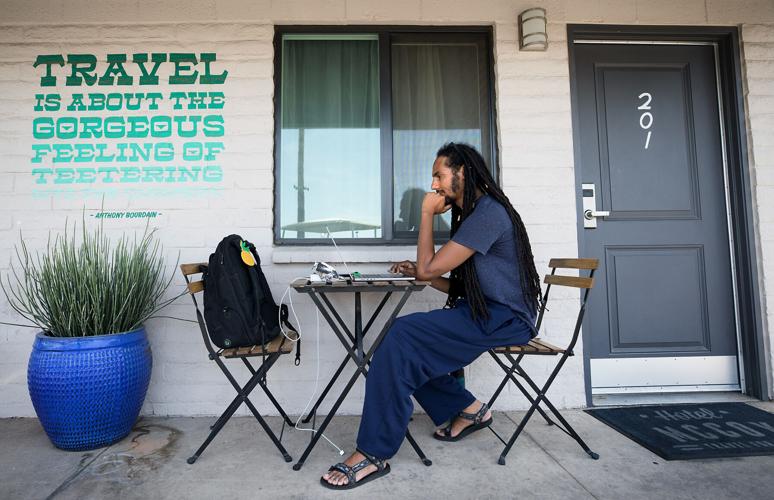 Levi Lunon works on his laptop outside of his room at Hotel McCoy, 720 W. Silverlake Road. The quote on the wall was painted by Modern Aquarian.

From the beginning, Hotel McCoy was made to be an art hotel.

In the last four years, the hotel has become home to nearly 70 murals and has around 70 guest rooms named after local artists. On the visual arts front, between 150-200 local artists have had their art for sale or on display at the hotel.

Beyond the murals are smaller personal touches, such as parking spaces labeled with names of people and items associated with Tucson like dry heat, creosote, “Can't Buy Me Love” and University of Arizona alum Steve Kerr.

Then there’s the local art in the gift shop and hanging in the lobby, the cactus-themed items in the claw machine, and the glittery Tucson-themed art vending machine made by artist Jessica Flax.

The hotel hosts art-centric events and a lot of the hotel’s employees are artists themselves. Even the list of pool rules is a mural.

“We wanted to do something that felt like the community that it was in,” says hotel president Nicole Dahl. “One way to do that is with art.

“Art is the language of the community so that’s where the idea was born. If we’re going to commit to being part of a community, then we have to showcase and support the art of that community.”

When you enter Hotel McCoy, the first thing you’ll see are murals — everywhere.

“She had this idea of using her reverence of desert creatures and bugs, and people of the desert, and combining them,” Dahl says, adding that Gonzales crowdsourced on Instagram and found 13 people to be part of the mural series.

“The birth child of that idea was super collaborative with me and Ashley,” Dahl says. “She’s just wildly talented and super humble. She’s one of those people where I can pick up the phone and say, ‘I have this outer space idea,’ and then she just gets it and brings it to life.”

You’ll also find a surfing frog painted by Joe Pagac, a huge wall of painted wings perfect for selfies created by Ignacio Garcia, an Aretha Franklin mural in a community space by Alley Cat Murals, a painting of San Xavier Mission by Signs by Kurt, a moon painted by Alyssa L. Robinson, and a wall of cacti by Alex! Jimenez — among many more.

“With Tucson, there’s so many incredible artists within our community and there’s also such a diverse roster of artists,” Dahl says. “Sometimes I think if you plan a project with just one or two artists and try to stay within a theme, you really miss out and limit yourself. So it kinda goes back to the root mission — we want to be a translator for the community of Tucson and use art as that language, so that needs to involve many different voices.”

The murals typically aren’t commissioned, allowing artists to paint ideas of their own.

“I’ve been on that property for four years and every time I’m onsite, I just take a moment to think like, ‘This is so cool,’” Dahl says. “I get to walk among Tucson legends.”

“It’s just an exposure to everybody’s love language and expression,” she says. “If you really take five minutes to walk around, it’s a sacred moment.”

One wall even features a poem written by Dahl herself, inspired by her love for Tucson. Dahl has also previously written freelance book-related stories for #ThisIsTucson.

“Having lived in other places, I was really able to identify there’s a magic to Tucson and it’s a combination of the culture, the people, the art, the weather. We’re really blessed to live here,” she says.

Dahl says it feels vulnerable to put your words on a wall — especially ones that carry a message from a personal period in your life.

“But the reward of seeing other people connect with that — we get people that will come in, maybe they’re here to get medical treatment or they’re here for a funeral — and you’ll see them in tears reading a poem or seeing a mural and it was just the thing they needed to see at that moment,” Dahl says.

“And that’s where the deeper message of this hotel comes to play where it’s like, sometimes when you’re traveling, you’re seeking solace and reprieve from life. And those paintings and murals and things like the vending machine — they can speak to people and tell them exactly what they need to hear at that moment.”

‘Art is the language of the community’

Every single room at Hotel McCoy is different. All are named after local artists.

In each room, you’ll find the artist’s bio and ways you can connect with them.

“We always tell people that your room’s a living gallery, so you may see a missing piece,” Dahl says. “Our tagline is — if it comes off the wall, you can buy it and the money goes to the artist.”

Purchasing art from Hotel McCoy directly supports the artist who made it. The hotel doesn’t take a commission.

“It was just one of those ideas where no one was really doing it in hotels and so you were like, ‘Is it because it won’t work?’ but it’s been so cool,” she says. “My favorite part is when someone sells a piece and they’re like, ‘I’ve never sold a piece for this much before,’ or watching Jessica Gonzales’ career just blow up over the past four years. That’s so special and it’s my favorite part of the job.”

Also inside the rooms is a chalkboard — a way for guests to create art of their own.

“I really think in these times, art is a universal language, so just allowing people to feel the art and then go in their own room and express themselves is pretty cool,” Dahl says.

At Hotel McCoy, which also has a second location in Washington, the mission statement is “travel for all,” with a goal of making guests feel comfortable and welcome in an accessible space. One example is with the hotel's kindness rate — do a good deed and book your room at a cheaper cost.

“We want you to feel like you’re staying at a place that has a ton of amenities and a ton of fun, but feels like you’re being hosted, like you’re being welcomed into someone’s home and community. So, because we have that community element, everything is less formal and more warm,” Dahl says. “No thoughtfulness was sacrificed in our design and our concept, but we want the, ‘Hey, you’re coming into our community and we want to show you why we love living here and why we think it’s super cool that you’re here.’”

Murals in the Tucson area continue to inspire hope and fill our city's walls with beauty. Here's where to find some of them!

Think little free libraries, but with art: Tucson is home to a tiny free art gallery

The Museum of Contemporary Art in Tucson, Arizona, is now home to a tiny free art gallery dubbed Mini MOCA, where passersby can take and leave miniature pieces of art at no cost.

Our little corner of the Sonoran Desert gets the full David Attenborough treatment in a new BBC nature documentary set to premiere on PBS on July 27.

What's happening in Tucson, Arizona this weekend: Back-to-school drives and free backpacks, Santa in July, a monsoon plant sale, a HUGE sale with items for kids and babies, free movies, and more in the Tucson, Marana and Oro Valley areas.

What's happening in Tucson, Arizona this month? Margarita championship, monsoon plant sale, events at the Botanical Gardens, craft workshops, beer festival, and we say goodbye to some summer favorites. Plus, more in the Tucson, Marana, Oro Valley and Sahuarita areas!

Submissions are now open for the Arizona Biennial, an exhibition showcasing some of the most innovative and diverse new works being created in the state.