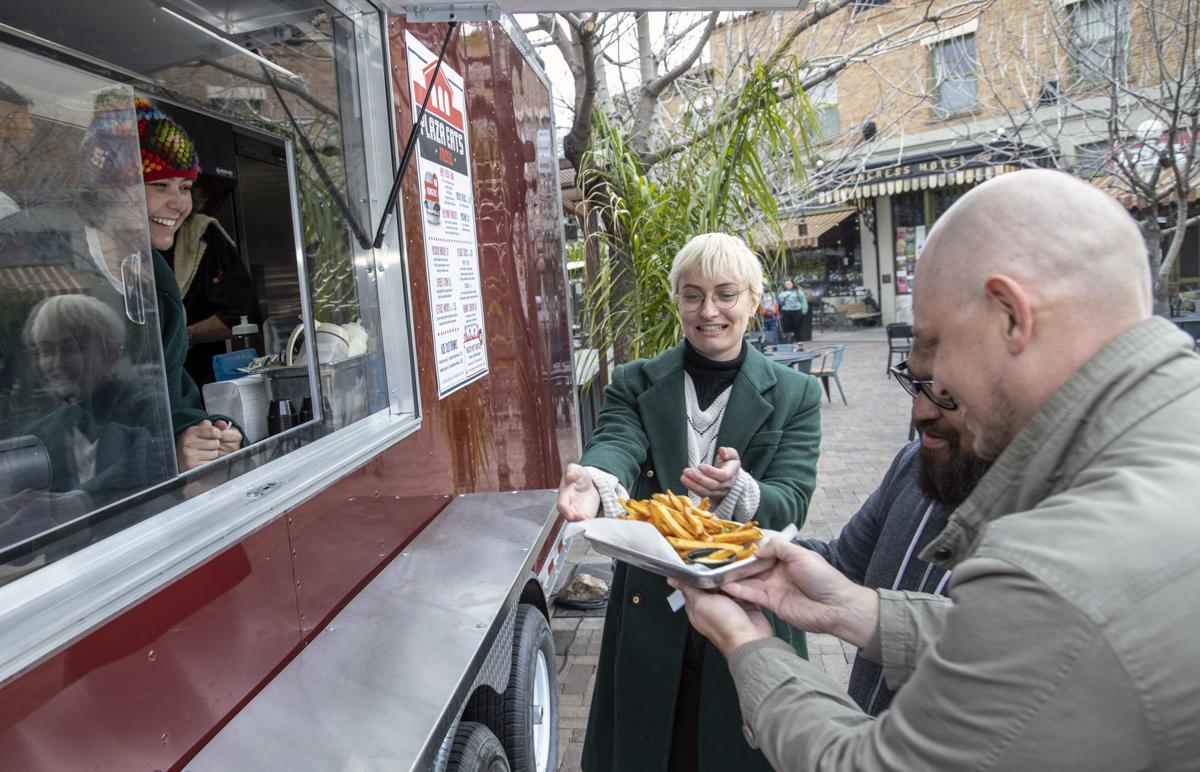 Cashier Betsie Dries watches from the Plaza Eats food trailer as hotel employees enjoy a serving of french fries during the soft opening of the new eatery, which will offer many of the same items available at Hotel Congress’ Cup Cafe. 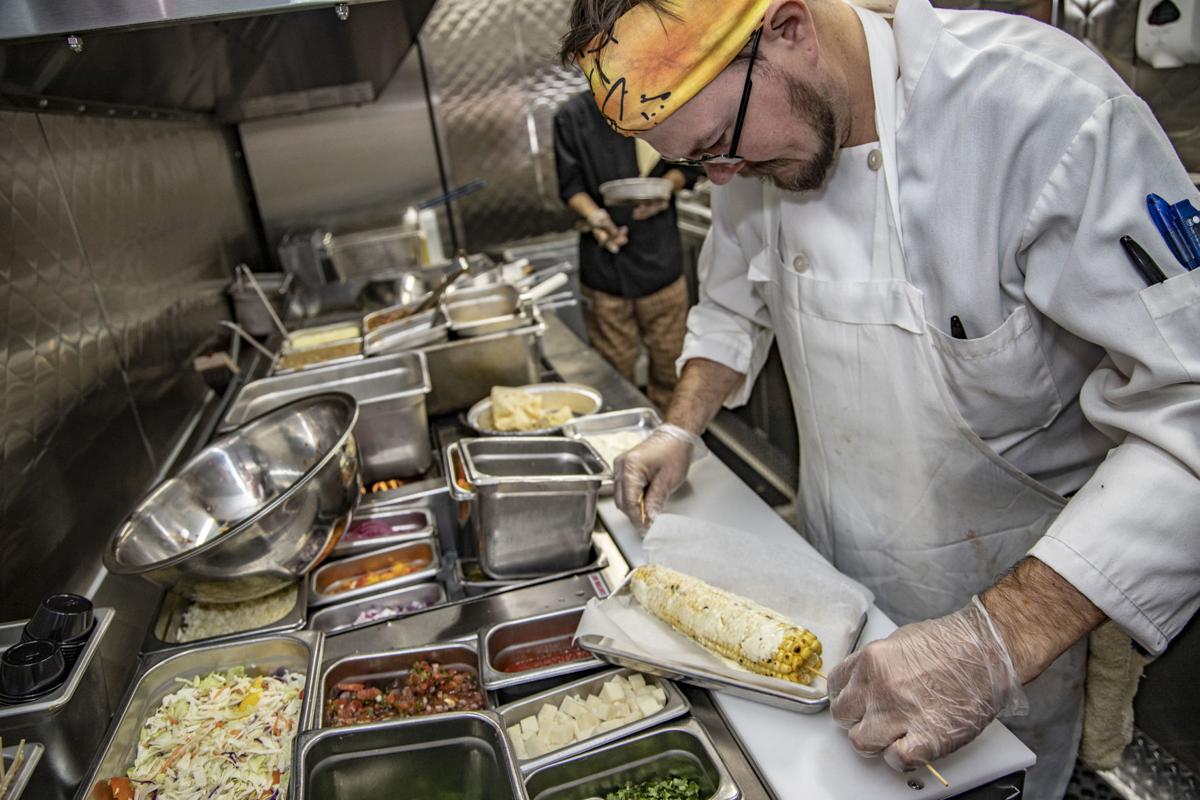 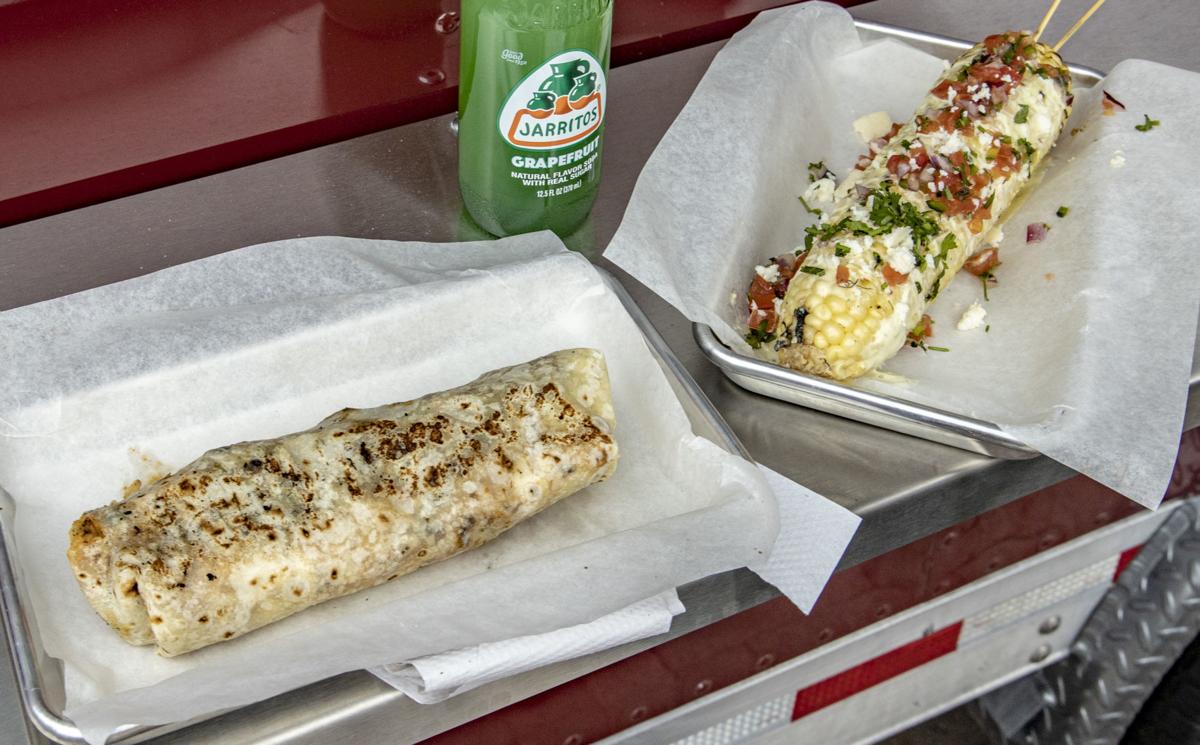 A burrito and a street corn were among the first orders during the soft opening of Plaza Eats food truck on the patio of Hotel Congress on Feb. 21, 2019.

Cashier Betsie Dries watches from the Plaza Eats food trailer as hotel employees enjoy a serving of french fries during the soft opening of the new eatery, which will offer many of the same items available at Hotel Congress’ Cup Cafe.

A burrito and a street corn were among the first orders during the soft opening of Plaza Eats food truck on the patio of Hotel Congress on Feb. 21, 2019.

Downtown weekend revelers with late-night hunger pangs have a new dining option, located within the plaza area at Hotel Congress.

The historic hotel, which is celebrating its 100th year in 2019, recently installed a food trailer meant to accommodate evening traffic, including bar hoppers and post-concert crowds, until 2 a.m., Thursdays through Saturdays.

Dubbed Plaza Eats, the trailer offers a mix of favorites from the hotel’s Cup Café — menu items like the Picacho nachos, lettuce wraps and a plant-based Beyond Burger – and classic international street foods.

Customers can nosh on ears of corn topped with a jalapeño aioli, pico de gallo, Cotija cheese and cilantro, or order poutine, a Canadian dish made up of fries with cheese curds covered in a smoked house gravy.

Congress marketing director Dalice Shepard said the menu keeps in line with the cuisine offered at the Cup Café.

“When creating a new food truck, it made a lot of sense to stay true to what we do well and what the public has responded to,” Shepard said. “It is a unique approach to what we would consider contemporary American food. Food that is approachable, relatable.”

The addition of the food trailer is part of the hotel’s ongoing efforts to maximize the use of the outdoor space it has, turning the plaza into what Shepard refers to as an “urban park” and making the whole experience more community driven for visitors.

The hotel is investing an estimated $500,000 into the plaza, Shepard said, including the construction of a state-of-the-art amphitheater that will be located on the northwest end of the property.

The project is expected to break ground this summer.

When completed, the amphitheater will be able to accommodate national touring acts in addition to local artists and community events, Congress entertainment director David Slutes said.

Slutes said the idea for a more permanent outdoor venue was inspired, in part, by trips to Austin, Texas.

“Half of the venues out there are outdoor venues,” Slutes said.

And while Tucson has the nearly 5,000-seat AVA at Casino del Sol and smaller outdoor spaces, such as Monterey Court on West Miracle Mile and La Cocina on North Court Avenue, a great midlevel outdoor concert venue, in Slutes’ mind, did not exist.

As an outdoor venue, the plaza will be able to accommodate about 750 people, Slutes said. By comparison, Club Congress, located within the hotel, has a capacity of about 350. The Rialto Theatre, located across the street, holds about 1,200.

“It will be a nice-sized venue,” he said. “When you think of what Tucson has already with (Club Congress), 191 Toole, the Rialto Theatre, it fits right into that.”

Slutes said Hotel Congress has been testing the waters the last couple of years with a spring and fall concert series, held on the plaza on a portable stage.

The amphitheater is expected to be double in size, covered, with green room accommodations.

Slutes said the addition of a permanent stage will work toward the hotel’s vision of turning the plaza into a community-driven space.

“People will come to shows and have that food component available,” Slutes said. “It will be like a cool, little oasis.”

BBQ Rush might be the only restaurant in Tucson where you can order ground beef samosas to go with your barbecue brisket plate.