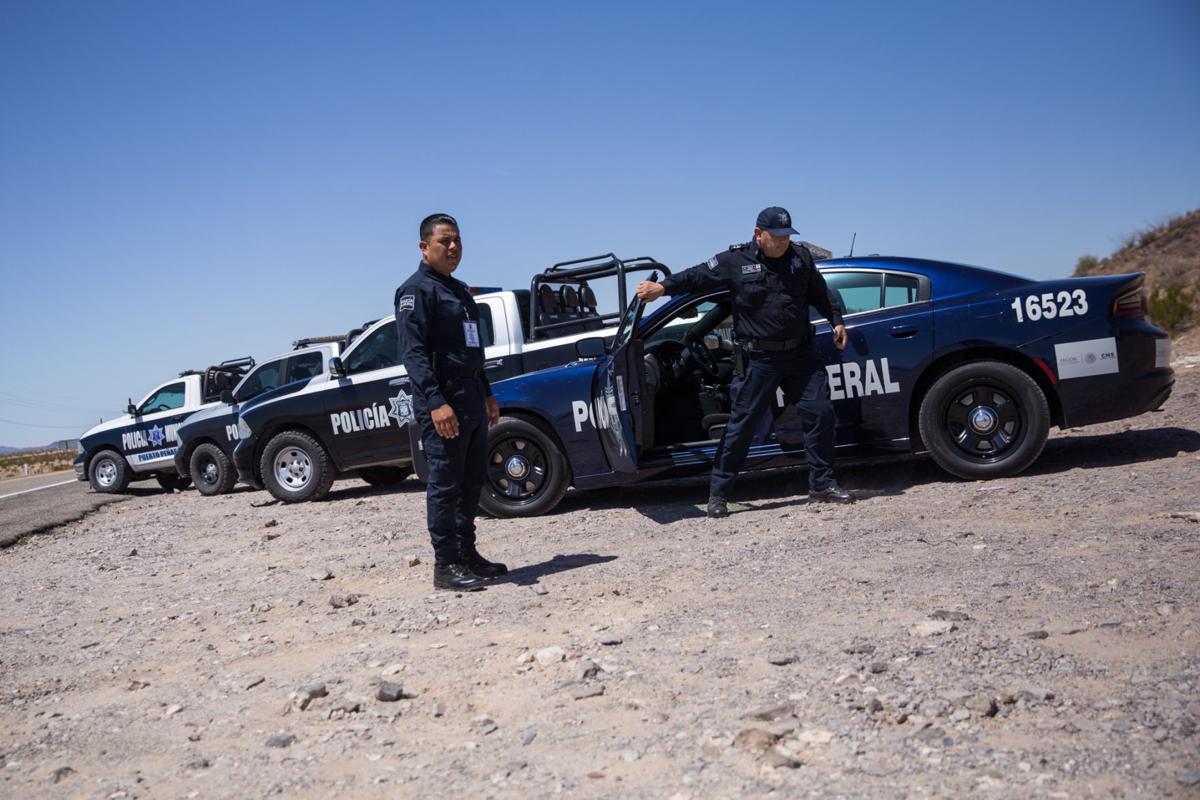 Mexican municipal, state and federal police park off the safety corridor near Sonoyta, across the border from Lukeville. 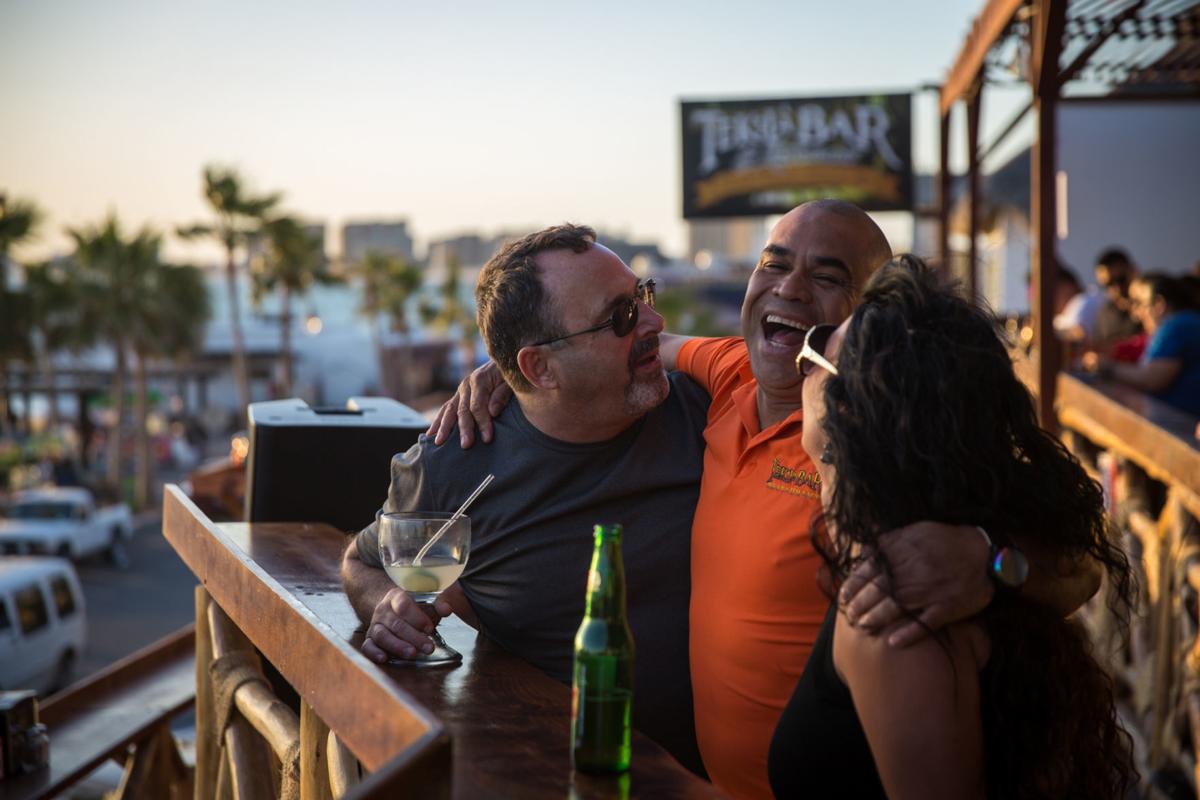 Tourists Brad Couvau and Patrina Bryant laugh with bartender Martyn Soria, center, on the top deck of Tekila Bar in Rocky Point. Bryant says she goes to Mexico every year. 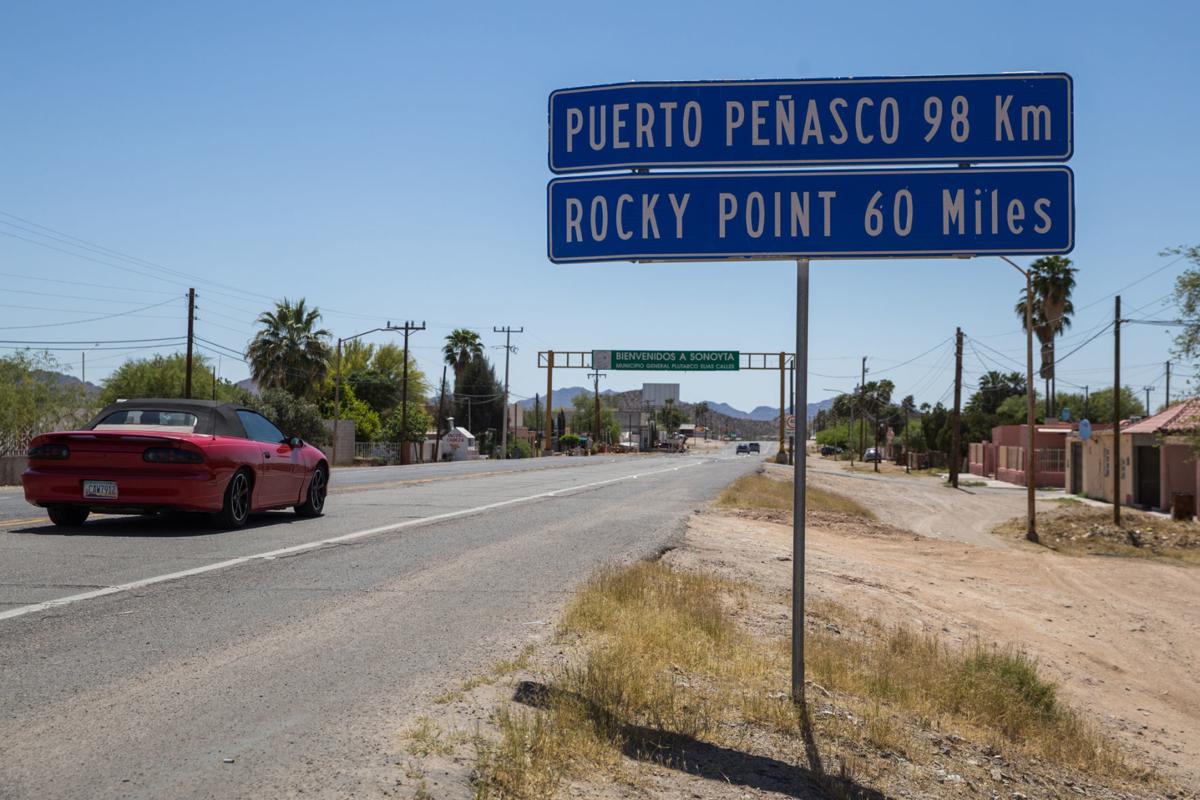 As part of the safety corridor project, more traffic signs along the 63-mile stretch of the Federal 8 highway will feature both Spanish and English. 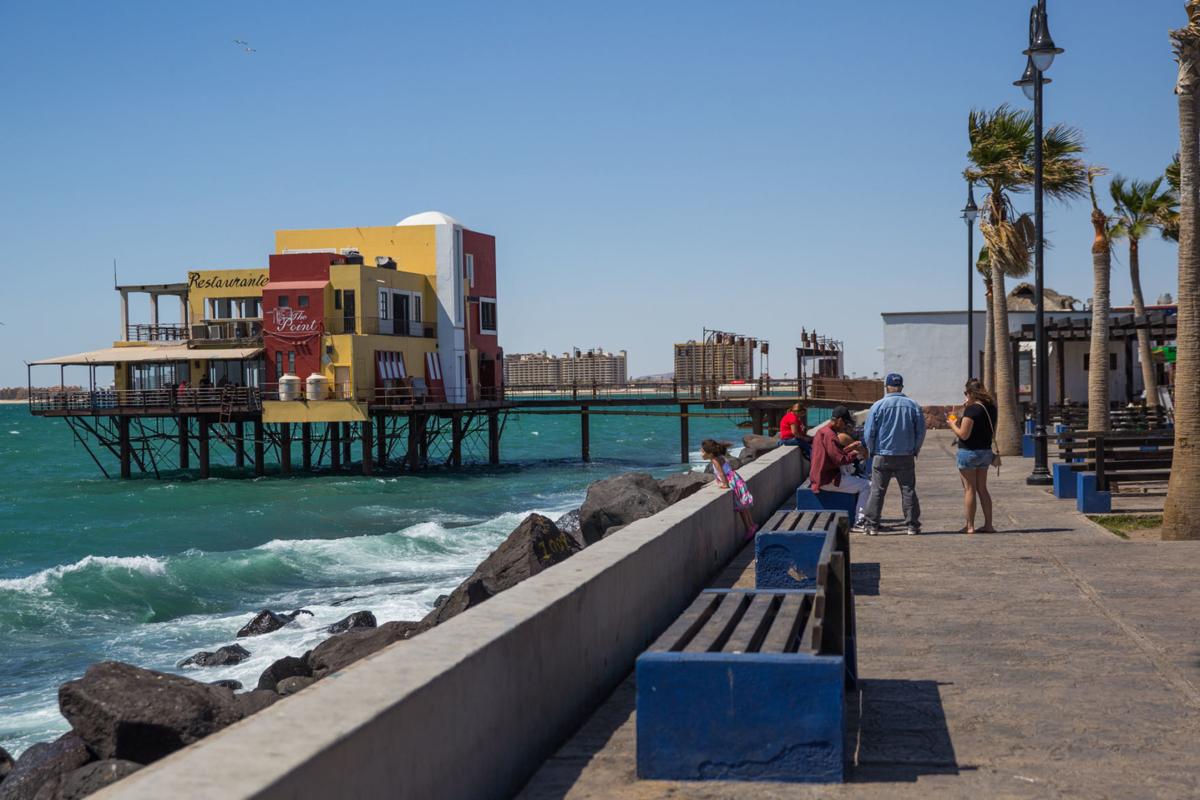 Mexican municipal, state and federal police park off the safety corridor near Sonoyta, across the border from Lukeville.

Tourists Brad Couvau and Patrina Bryant laugh with bartender Martyn Soria, center, on the top deck of Tekila Bar in Rocky Point. Bryant says she goes to Mexico every year.

As part of the safety corridor project, more traffic signs along the 63-mile stretch of the Federal 8 highway will feature both Spanish and English.

PUERTO PEÑASCO — The 63-mile stretch of highway between the Arizona border town of Luke- ville and the Mexican beaches of what Americans call Rocky Point is mostly bland and barren, except for an occasional wooden cross or a roadside shrine in the middle of nowhere.

Mexico’s Federal 8 highway between Lukeville and Puerto Peñasco has been unsafe for years because it’s desolate, narrow and dimly lit, with little signage to guide drivers, Sonoran and Arizona officials say. Yet the beaches and bars of Puerto Peñasco have been a draw for tourists and college students — the bulk of them from Arizona — for decades.

Statistics are hard to come by, but the latest fatal wreck apparently occurred in March, when a car carrying two students from the University of California, San Diego, ran off the dark highway and struck a palm tree, according to news reports.

To address such concerns, Arizona Gov. Doug Ducey and Sonora Gov. Claudia Pavlovich in December announced the creation of a safety corridor along Federal 8, with bilingual road signs and better-trained medical and law enforcement first responders.

“It’s a dangerous situation because it’s a two-lane road,” said Tom Herrmann, spokesman for the Arizona Department of Transportation. In addition, speed-limit signs south of the border transition from miles per hour to kilometers per hour, which also can confuse American drivers.

The project, dedicated in March, is the first binational safety corridor linking the United States and Mexico. Officials from both countries say the collaboration will increase safety for thousands of Arizona travelers, bolster international relations and boost Puerto Peñasco’s economy.

A major component of the project is an increase in Mexican police officers and first responders who have been specially trained by ADOT. With law enforcement agencies working together, Herr-mann said, safety personnel can get to crashes much more quickly.

ADOT spent nothing but time to train Mexican officials, Herrmann said, and Sonora officials will decide how much signage they will install and how many medical personnel they will dedicate to the corridor. They have not set a completion date.

The project also includes a “pilot program that will have Sonora sharing information from that area to 511 and ADOT’s Arizona traveler information site, az511.gov,” according to a news release from Ducey’s office.

Officer Pedro Espinoza Armenta of the Sonora state police was among those who welcomed the project.

“People will come in with more confidence,” he said, which will increase the tourism dollars on which northern Sonora depends.

Local leaders and business owners said the safety work on Federal 8 will have positive economic benefits.

Luis Altamarino, director of international relations and tourism for Puerto Peñasco, said the U.S. always has played a role in the city’s economy, and the safety corridor is one way to help maintain that relationship.

“There’s always been that American community that has been a part of the growth of Peñasco, and it will continue to be because there’s a big connection,” Altamarino said. “Economically, it makes total sense for us to have this partnership.”

Compared with the mid-2000s, there are no longer “slow” seasons in Puerto Peñasco, he said.

Although roughly 85 percent of its U.S. tourists come from Arizona, Puerto Peñasco has seen an increase in visitors from other states.

According to Puerto Peñasco’s Convention and Visitors Bureau, more than 2.3 million people visited the town in 2017, a 5 percent increase from 2016.

More than 900,000 people entered Arizona through Lukeville in 2017, according to the U.S. Department of Transportation. Most were Arizonans coming back from Rocky Point, Herrmann said.

The U.S. State Department, in a March 16 travel warning, urged travelers to “reconsider” going through Sonora, although it identified Sinaloa and Michoacán as the most dangerous states. Sonora is a key location in the international drug and human-trafficking networks, it said, while noting that crime in northern Sonora is much lower.

The warning also advised travelers headed to Puerto Peñasco to use the Lukeville-Sonoyta border crossing and limit driving to daylight hours.

Inside Tekila Bar, Canadians Patrina Bryant, 46, and husband Rick Fuerstenberg, 47, said they and some Canadian friends make the drive down Federal 8 every year.

“We love Mexico and we love coming to the warmer climate,” Patrina Bryant said.

“We need to generate more activities for people to come and spend during their stay or vacation here but, also at the same time, provide them more security,” Palacio said.

“We’re really glad that Gov. Ducey and Gov. Pavlovich got together, and we expect to be on the next Arizona-Mexico commission presenting what we have accomplished since December,” he said.

Edward Oswaldo Martinez, commander of Puerto Peñasco’s municipal police, said tourism from the U.S. is beneficial to the state, and travelers should feel confident south of the border.

“I would have to say that tourists should visit us,” Martinez said. “It’s secure, and it’s the most beautiful in the whole state. It’s friendly.”

Herrmann said, “There’s no reason not to” expand such safety collaboration throughout Mexico, adding that the safety corridor is only one example of the type of work being done between Arizona and Sonora.

“This is just a strengthening of the relationship,” Herrmann said. “It was embraced by people of both states, and we’re very excited that it’s in place. I can only see this growing from here.”

He's charged in connection with incident at fraternity house.