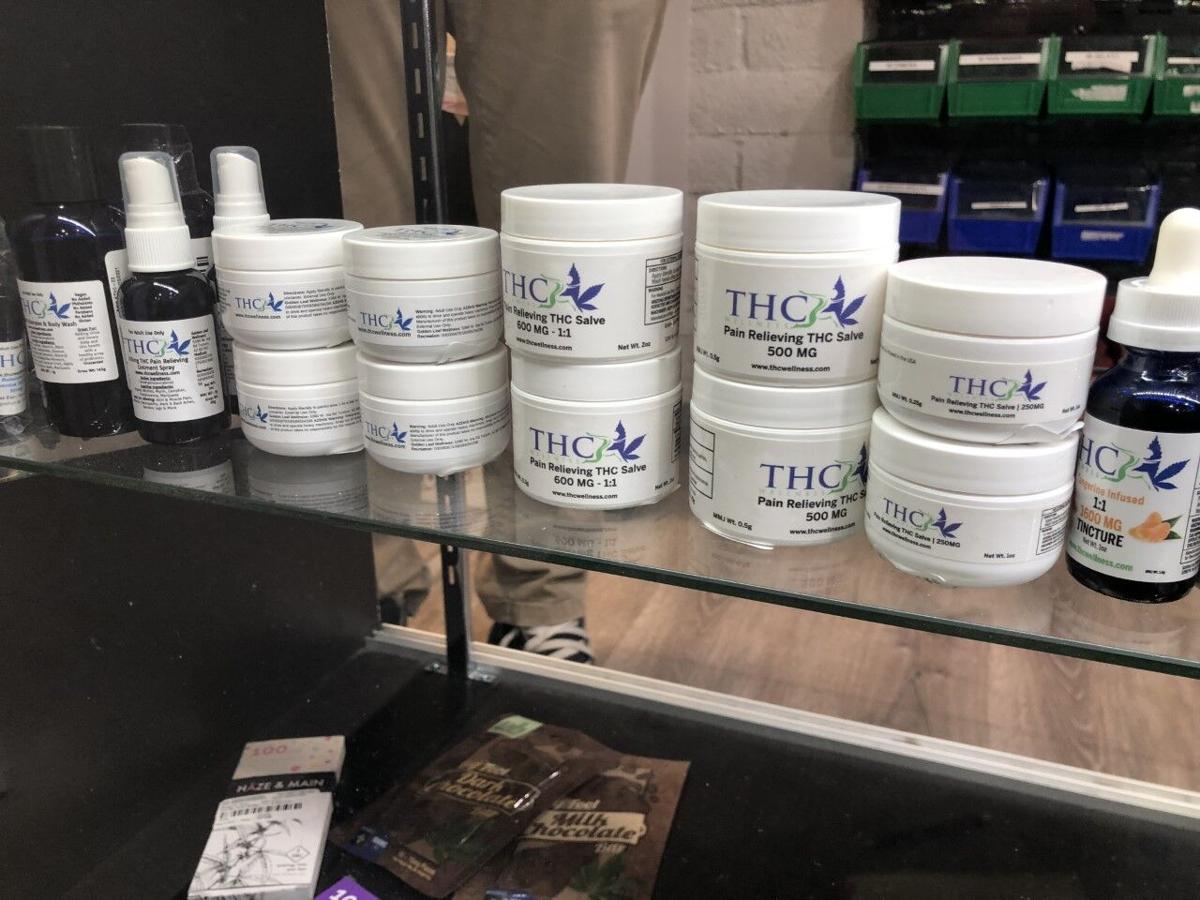 Topical products such as lotions and balms line the shelf at Nature Med dispensary. THC Wellness, the brand responsible for the products, also has a sister brand marketing CBD-based products known as CBD Wellness. 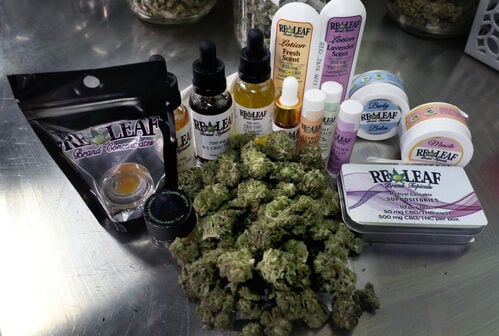 Topical products such as lotions and balms line the shelf at Nature Med dispensary. THC Wellness, the brand responsible for the products, also has a sister brand marketing CBD-based products known as CBD Wellness.

Smoking is how most people are introduced to marijuana. Since many don’t like smoking for various reasons, options like vaping, edible products and even soft drinks are now available.

But are there products with the pain-relieving qualities of marijuana that won’t trigger that euphoric “high” associated with it?

“What is undeniable is that these patients who utilize topicals are reporting tremendous relief in some cases,” said Phoenix-based marijuana researcher Dr. Sue Sisley.

And while medical marijuana patients were the only ones with access to these products until recently, the passage of Prop. 207 late last year has opened the industry to a whole new recreational market.

How topicals are made and places to find them

Sisley explained there are a few processes used to extract the needed materials for making topicals from raw marijuana flower.

From chemical solvents like butane and ethanol that strip the plant of its myriad compounds, to simply squeezing plants until they begin to ooze in a process called “rosining,” each process has the same goal in mind: obtaining the plants' cannabinoids like THC, CBD and terpenes.

“The cannabinoids and terpenes then get turned into an oil, which then gets infused into these creams or salves,” Sisley said.

For his dispensary’s line of topical gels — known as iLava Touch — Tucson's Downtown Dispensary cofounder and partner Moe Asnani said that the extracted cannabinoids are infused with a collection of common and rare essential oils.

“That formulation was done by a clinical aroma therapist,” Asnani said. “That formula, which has some pretty exotic essential oils ... we take all that and combine it with this ratio on THC and CBD we’ve found to be pretty optimal for pain relief.”

Downtown Dispensary and its sister-dispensary, D2, as well as over 80 dispensaries across the state carry iLava products, which include CBD- and THC-based gels, and creams with the option of a roll-on, Asnani said.

Another local dispensary, Nature Med, is home to separate lines of THC-based and CBD-based products, known as THC Wellness and CBD Wellness, respectively.

According to Matthew Scott, the chief scientist and founder of both CBD Wellness and THC Wellness, their topical products run the gamut: from probiotic THC shampoo and body wash to bath bombs.

"Due to how the current marijuana industry is, each dispensary is different and decides what they are going to offer to their customers and patients," Scott said, explaining his brands' wide array of options.

How topicals work and what they treat

Theoretically then, when one applies a topical gel or lotion to a sore spot, what happens? Sisley described what she thinks is happening when marijuana compounds are absorbed through the skin (or dermis) layers.

“The cannabis gets in there and it basically intervenes in the inflammatory pathway,” Sisley said. “There’s cytokines and interleukin ... and cannabis seems to interrupt those pathways.”

Asnani and others tout the pain- and inflammation-relieving qualities of marijuana-based topical products.

“We don’t recommend anybody put it on an open wound or anything like that,” he joked. “But if your skin is clean and you have some pain, absolutely it’s safe to use. The whole point of it is to relax your muscles and give you that relief.”

Scott echoed Asnani, while noting that every patient and customer is different. Scott emphasized that a vast majority of customers find the products effective.

“Our most popular topicals are the ones patients use to help relieve pain and inflammation,” he said.

Mike Robinette, executive director of the Southern Arizona National Organization for the Reform of Marijuana Laws, or NORML, said that he uses a marijuana-based topical to relieve his back pain.

“And believe it or not, I rub it on my jaw,” Robinette said. “And if I use a topical on my jaw, it actually tends to alleviate that pain overnight.”

Sisley said that at first, being a medical researcher, she was skeptical of claims that topicals actually worked to relieve pain or inflammation in any meaningful way. The chief reason for her skepticism?

“Folks weren't getting high from topicals,” Sisley said. “So, (scientists and researchers) questioned whether they were really getting absorbed.”

But over and over again, anecdotal evidence seemed to point toward topical marijuana products having a positive effect on patients' pain levels.

Unfortunately, Sisley said, there aren’t many clinical studies on the effects of marijuana-based topicals on pain or any other subject.

That’s by design. The National Institute on Drug Abuse, or NIDA, the federal government’s agency tasked with supplying clinical marijuana for research,  since 1968 has been given the sole contract for growing marijuana for clinical research to the University of Mississippi.

That's a problem for a few reasons. First, the marijuana grown there isn't of the highest quality said Sisley. Second, it's the only game in town, so if the lab at Ole Miss doesn't have it, it doesn't happen.

Still, Sisley said she thinks cannabis-based topicals could have a wide variety of applications.

While issues like arthritic joint pain, soreness from past injuries and other chronic pain conditions could be alleviated, Sisley also mentioned skin conditions like acne and psoriasis.

“Again, all of these conditions, skin conditions have an inflammatory component to them,” she said.

Robinette, who has been involved with NORML and marijuana advocacy for years, said he sees topicals as a sort of bridge product between the cannabis industry and a curious public. That’s due in part to topicals not having a psychoactive effect.

“So what you find is, particularly with elderly people, you'll find that it's almost like their gateway drug into the world of cannabis,” he said. “Because it's something they can just rub on.”

Sisley, who is currently involved in a case against the DEA and federal government in order to break the University of Mississippi’s monopoly on growing cannabis for research, said that she is surprised that large pharmaceutical companies haven’t pounced on the nascent cannabis-topical industry.

“As the market has gotten more sophisticated in the last 10 years, they've come up with very innovative ways of creating these creams and improving the absorption with this nanotechnology and things like that," she said. "So they're using techniques of big pharma, but they are not big pharma."

Ultimately, though, Sisley thinks the success of topicals will be measured in how many patients and customers it helps. Some of that can already be measured in the improvement in quality of life for those once destined to taking heavy pharmaceuticals for pain relief.

"If people can achieve permanently just with a topical, then that's a huge victory for the patient and the physician who may have been trying to manage this with pills," she said.

The difference between medical and recreational marijuana in Arizona

CBD vs. THC: What to choose depending on your needs

With the recent passage of Prop. 207 and subsequent rollout of recreational cannabis sales h…

Things to do this weekend May 19-23, 2021 in Tucson, Arizona including indoor and outdoor events, virtual events, markets, drive-ins, drive-thrus and things to do with kids.

In a reversal of nearly five decades of policy, and almost five years after a former University of Arizona professor’s initial application, the U.S. Drug Enforcement Agency granted preliminary approval for the cultivation of marijuana for clinical research.