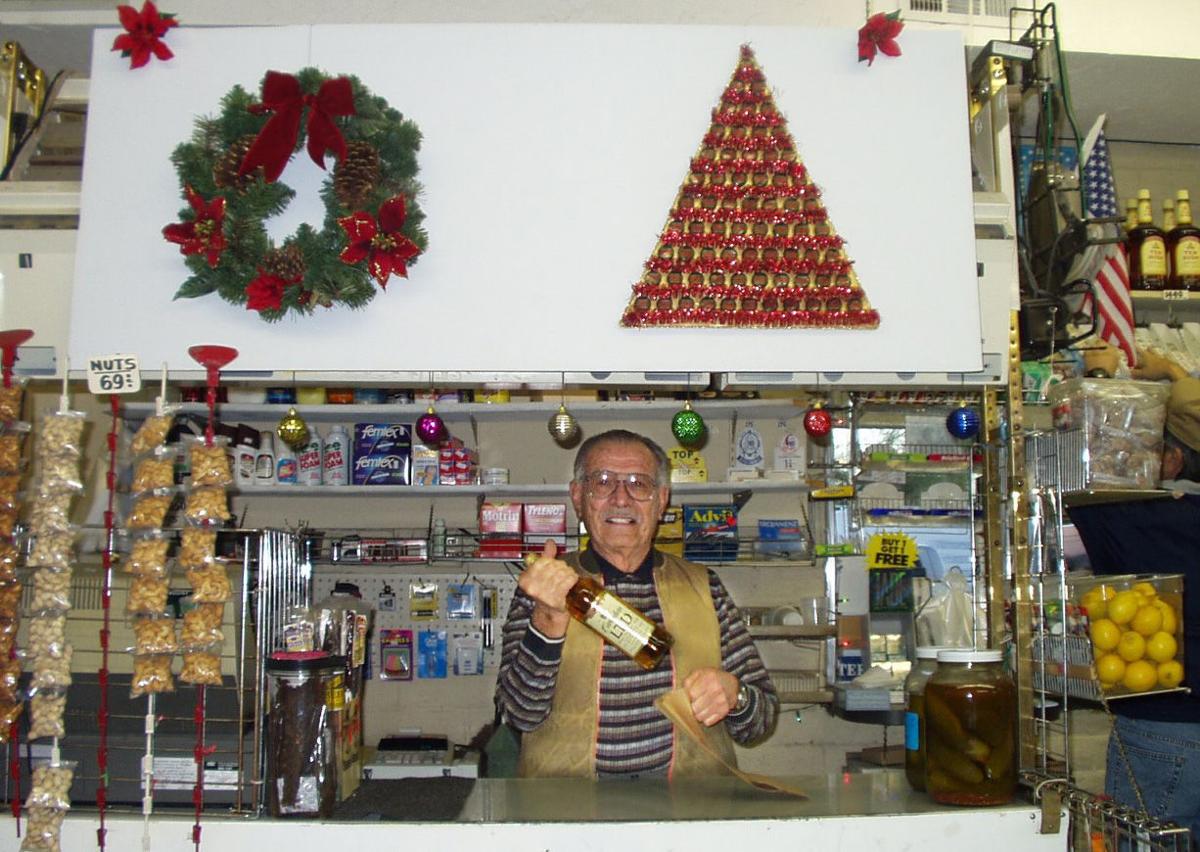 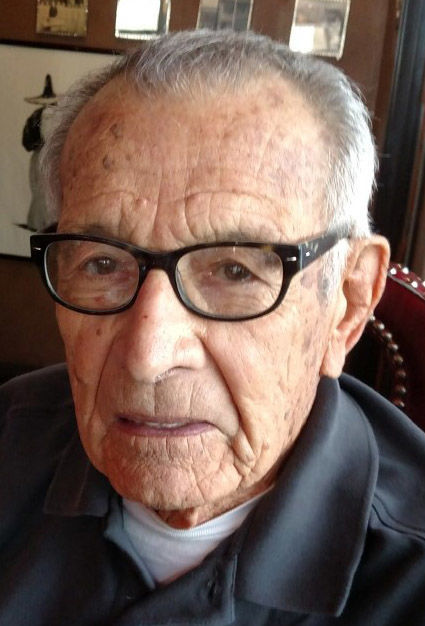 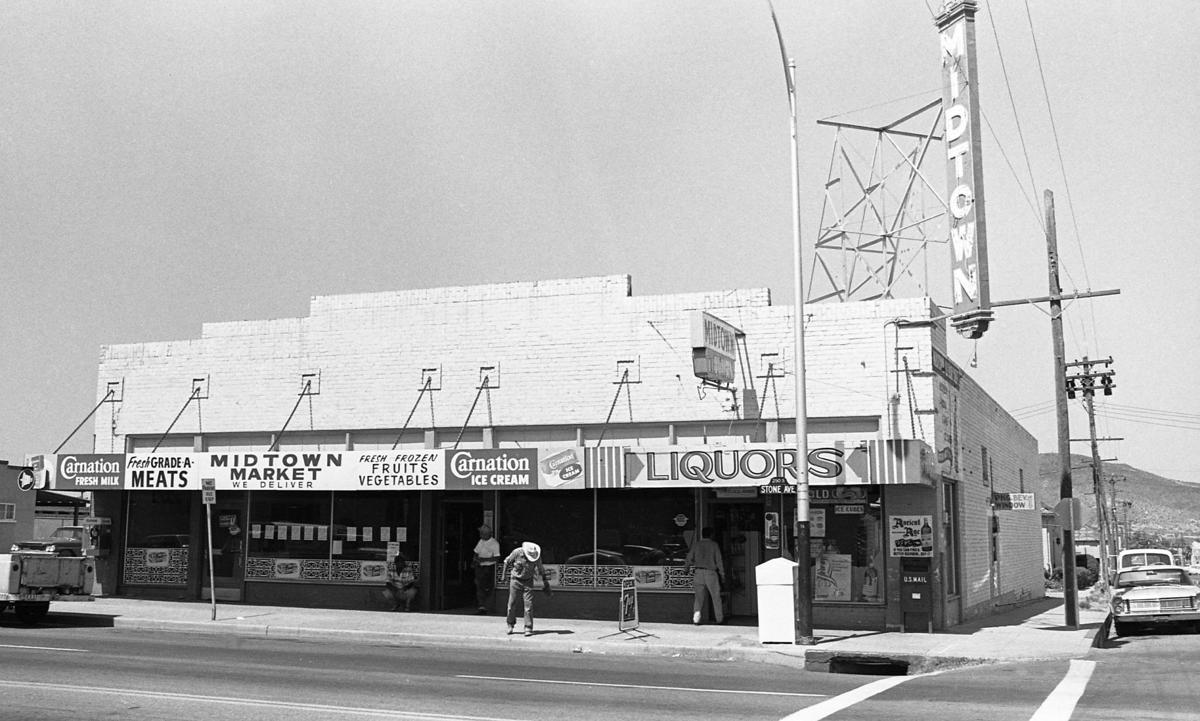 The Midtown Market and Liquor Store, 258 S Stone Ave and West McCormick Street, in 1968. It is now the parking lot of the Tucson Police Department headquarters. Midtown Liquors relocated to 339 S. Stone. 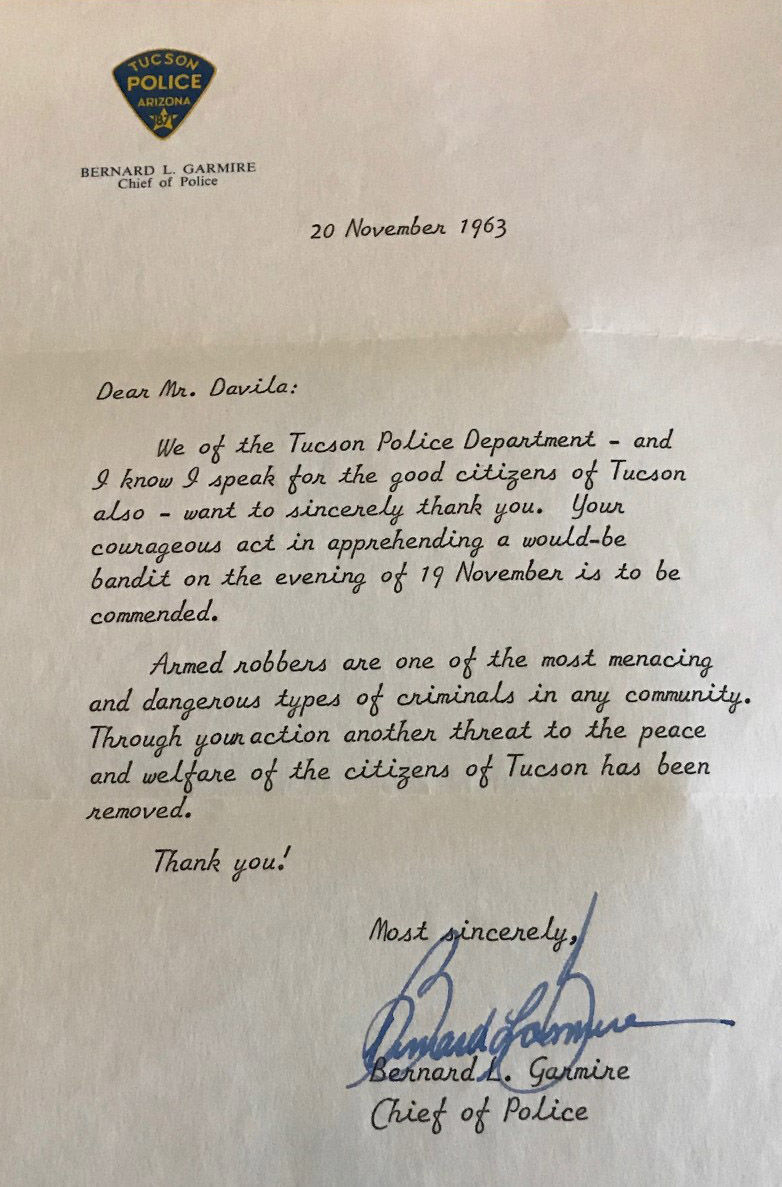 A letter to Monte Davila from Tucson Police Chief Bernard Garmire, commending Davila on apprehension of an armed robber outside Midtown Liquors in 1963. 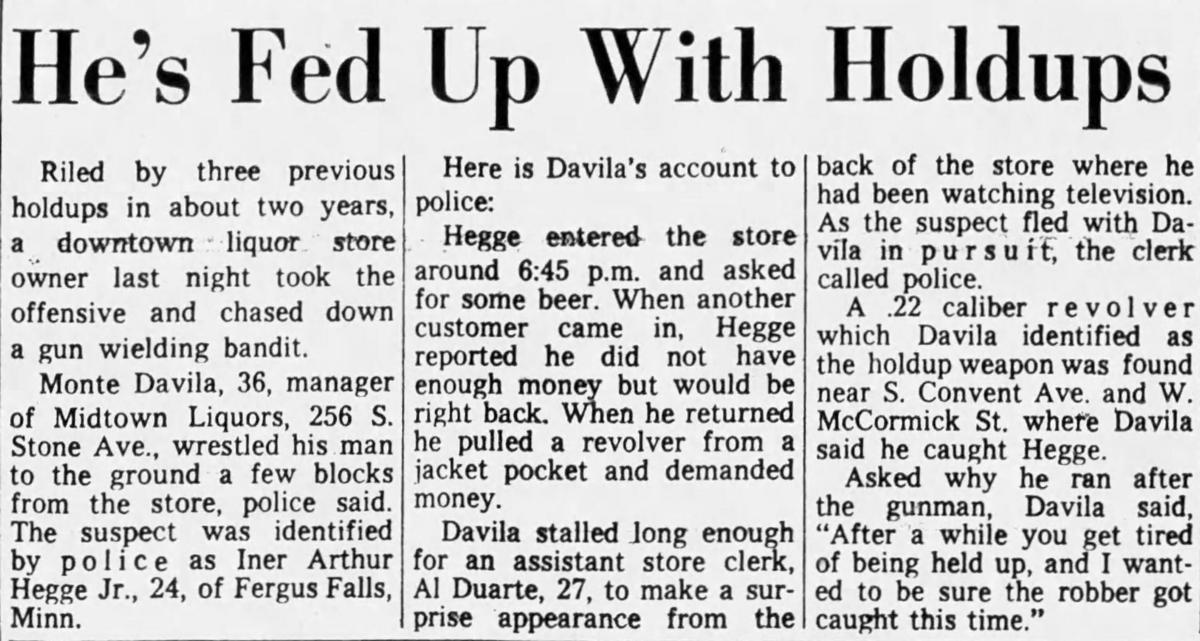 A Tucson Citizen story about Monte Davila’s famous encounter with an armed robber in November, 1963.

The Midtown Market and Liquor Store, 258 S Stone Ave and West McCormick Street, in 1968. It is now the parking lot of the Tucson Police Department headquarters. Midtown Liquors relocated to 339 S. Stone.

A letter to Monte Davila from Tucson Police Chief Bernard Garmire, commending Davila on apprehension of an armed robber outside Midtown Liquors in 1963.

A Tucson Citizen story about Monte Davila’s famous encounter with an armed robber in November, 1963.

Monte Davila’s children had pictured his funeral as a love fest, with hugs and kisses and a crowd of hundreds on hand to celebrate the life of a colorful Tucson original.

Instead, Davila, the owner of a downtown liquor store across from Tucson police headquarters – a man who once made headlines for tackling an armed robber and holding him down until officers arrived – was eulogized in a near-empty church.

An hour later he was buried with 10 people at his graveside, the maximum allowed in the era of COVID-19.

Social distancing rules have compounded the grief of Tucsonans whose loved ones passed away over the past month or so, whether they died from the virus or other causes.

People with large families, especially, face not just the pain of loss but the angst of having to choose which 10 loved ones can attend the funeral in person.

“For some families 10 people doesn’t even cover the immediate family,” said Seybert, who handled the Davila funeral.

Steff Koeneman, spokeswoman for the Catholic Diocese of Tucson, said she sympathizes with affected families, but the diocese must follow protocols to protect public health.

“It’s a hardship, no doubt about it,” Koeneman said. “But you’ve got to keep burying the dead.”

Cathy Fiorelli, general manager of Evergreen Mortuary & Cemetery, 3015 N. Oracle Road, said it pains her to have to share such news with bereaved families. “You can hear the disappointment in their voices,” she said.

Some families are eschewing churches and burials altogether, Fiorelli said, choosing instead to have their loved ones cremated and hold a future gathering once restrictions on crowd size are eased.

Some are using teleconferencing technology to hold virtual funerals online.

This week, Evergreen expects to hold its first “viewnerals” on a new tech platform that allows funeral services to be live-streamed to large numbers of viewers.

In a viewneral, only those directly involved in the service have audio function necessary to be heard online. Others can see and hear the proceedings but can’t be heard themselves, eliminating the problem of barking dogs or doorbells in the background as viewers tune in.

“We’re glad to be able to offer this service to partially fill that gap,” said Fiorelli.

But “it’s hard when you can’t even hug someone,” she said.

Muslim funerals typically involve large numbers of mourners praying in unison over the deceased, she said. Now the state has restricted gatherings to no more than 10 people.

“This is a very traumatic thing for our community,” Hourani said.

When Monte Davila, the owner of Midtown Liquor, died March 9 at age 92, his family arranged for a Catholic mass, a burial at Holy Hope cemetery and afterward, a catered Mexican feast for those who stayed to reminisce about their father’s storied life.

They planned for “a couple hundred people. My father had a lot of friends and people he met through all those years in business,” said his daughter Linda Lopez of Green Valley.

Monte Davila spent more than half a century behind the counter of Midtown Liquor, a family operation that opened in the 1940s on land that now is home to Tucson Police Department headquarters.

The business moved across the street years ago to its current site at 339 S. Stone Ave.

The elder Davila was thrilled, for example, when members of the 1970s group Crosby, Stills & Nash dropped by one night after a show at Tucson Convention Center.

“He was so excited because they bought $200 worth of stuff,” said his namesake son Monte Davila.

Among the patriarch’s personal effects is a thank-you letter written in 1964 by Tucson’s then-police Chief Bernard Garmire commending him for “your courageous act in apprehending a would-be bandit” at the liquor store.

The day after the Davila family finished planning a sizable funeral, a priest called to say only 50 people could come. That number soon dropped to 25, then to 10, as governments repeatedly reduced crowd sizes in a bid battle the pandemic.

“I was very apprehensive when things kept changing. I was afraid they might not be able to bury him at all,” Lopez said.

Monte Davila’s funeral was hard enough. Then, three weeks later, one of his daughters, Mary Lucille Davila, 70, died of cancer, putting the family through the ordeal all over again.

The family hopes to have a big gathering someday to give both of them a proper goodbye.

Lopez still tears up at the memory of the meager funeral rites, and worries about other Tucson families in the same situation.

“Were not the only ones going through this. A lot of people are suffering right now.” she said.

By the numbers: Map of coronavirus cases in Arizona broken down by county, April 14

The National Funeral Directors Association in early April issued recommendations for funeral homes that said they should follow the protocols for gatherings issued by their states. Absent those directions, funeral homes should limit funerals to 10 family members, hold outdoor graveside services whenever possible, practice recommended social distancing measures at any service, and provide online viewing services, if possible.

Photos for April 11: Tucson gets by during Coronavirus Pandemic

Carol Ann has been with the Star since 1999, but has been an investigative reporter for more than 30 years. She's won numerous awards in the U.S. and Canada. In 2003, she was a war correspondent in Iraq and was a Knight-Wallace Fellow in Michigan in 2008.