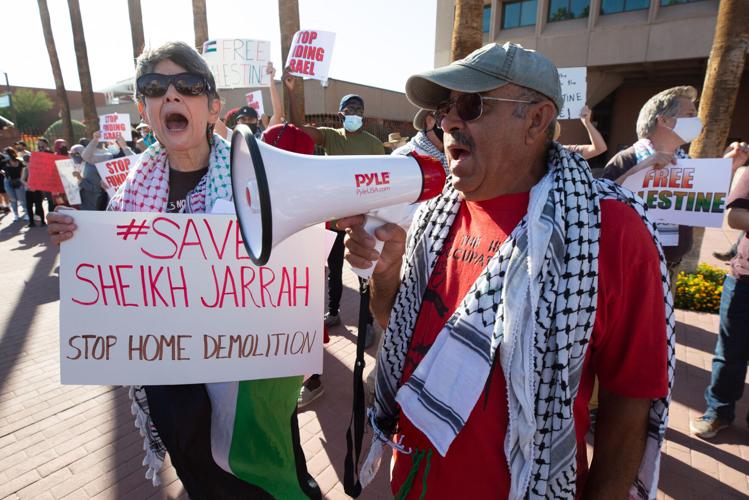 Retired nurse Sarah Roberts, left, with Mohyeddin Abdulaziz participates during a protest at the Federal Building in Tucson in May against Israel’s attacks on Palestinian West Bank and Gaza. 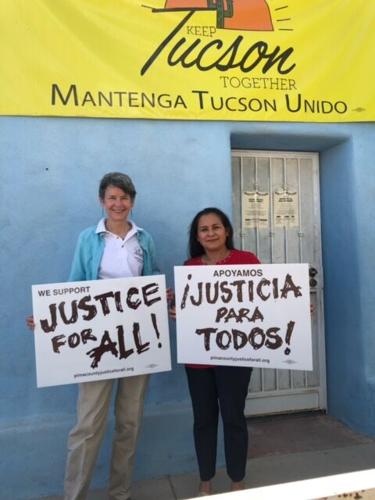 Sarah Roberts, left, works with Zulema Martinez as part of the Family Unification Team of Keep Tucson Together, which works to provide legal assistance to people threatened with deportation. 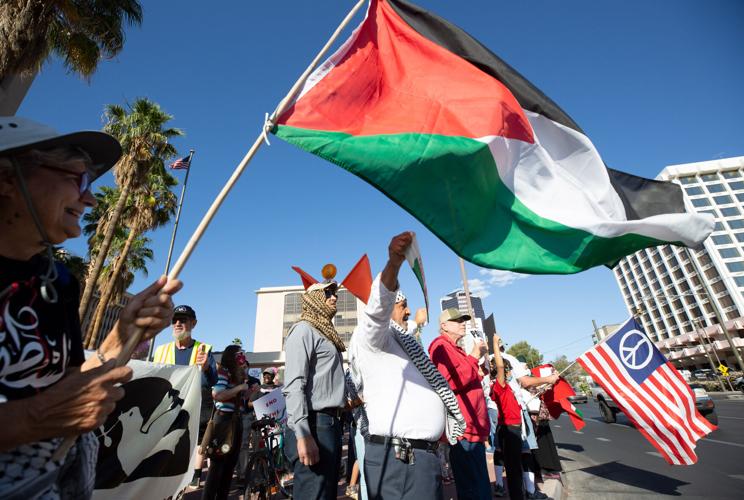 The Arizona Palestine Solidarity Alliance is an anti-militarization movement  that opposes U.S. support of Israel’s continued occupation of Arab lands but reaches beyond exclusively Palestinian concerns to U.S.-Mexico border issues.

If you’d gone to “ArizonaPalestine.org” in March, you could have gone to a plant sale.

This was all under the umbrella of the Arizona Palestine Solidarity Alliance. The operative word here, “solidarity.”

Retired nurse Sarah Roberts volunteers in a world informed by solidarity. For her, solidarity with marginalized people means “walking with, listening to, and centering the voices of directly impacted people, and being not just an ally, but an accomplice, which includes being willing to take a risk.”

Famously activist, but also famously modest, 65-year-old Roberts agreed to talk about her participation in Southern Arizona social justice movements only if the focus of the article would be on the work, and not on her.

Some of the movements she has been a part of — and taken risks for — include Humane Borders, Tucson Samaritans, No More Deaths, the St. Michael’s Guatemala Project, and, currently and significantly, the Arizona Palestine Solidarity Alliance, Keep Tucson Together, and Pima County Justice for All.

The first three — Humane Borders, Tucson Samaritans and No More Deaths — arose because of the alarming number of migrant deaths in the Sonoran Desert. Humane Borders, started in 2000, maintains water stations along migrant routes — those blue barrels with their distinctive blue flags.

Tucson Samaritans, founded in 2002, sends volunteers on foot into the desert to deliver water and food, address migrants’ minor medical ailments and necessities, and call for emergency services if they are needed. Roberts still makes trips into the desert and serves on the medical team.

No More Deaths, established in 2004, has an expanded mission of desert aid, Mexico aid, Border Patrol abuse documentation; Keep Tucson Together is a legal clinic for residents in danger of deportation.

It was in speaking of the Guatemala Project in her interview that Roberts first used the term “solidarity.” After the devastation the Guatemalan military wrought on Mayan people during the 80s and 90s, Ila Abernathy of St. Michael’s and All Angels Episcopal Church reached out to Mayan communities that were working to regroup (Communities of Population in Resistance). “How can we help?” Abernathy asked. The answer: health services. So, since 1993, a health project — “in solidarity and support,” said Roberts — has annually delivered to them medical supplies, health services and health education, taking direction from the partner Mayan indigenous communities.

The solidarity concept is integral to the mission of the Arizona Palestine Solidarity Alliance, for which Roberts does daily work with Palestinian-American Mohyeddin Abdulaziz. The Alliance is an anti-militarization movement that opposes U.S. support of Israel’s continued occupation of Arab lands but reaches beyond exclusively Palestinian concerns to U.S.-Mexico border issues.

Started in 2014, it is a coalition of groups that provides education, monitors legislation, supports the rights of Palestinians and stands with U.S.-Mexico border residents, including Native/indigenous, suffering expanded border militarization.

According to Roberts, Abdulaziz “works tirelessly … for peaceful, nonviolent solutions.” These times call for vigils, rallies and education.

High on Roberts’s list these days is Keep Tucson Together (KTT). A pro bono legal outgrowth of No More Deaths, KTT was established in 2011 in reaction to Arizona’s SB 1070, to provide legal assistance to people threatened with deportation.

After a modest beginning, meeting twice monthly at Southside Presbyterian Church, KTT quickly grew to a packed-house, weekly clinic at Pueblo High School. It has helped more than 3,100 people become naturalized. With the establishment of DACA, KTT expanded its services to assist young people complete the necessary paperwork and has handled approximately 3,200 cases.

The role Roberts currently holds in KTT is as co-leader of the Family Unification Team, partnered with Zulema Martinez, originally from Magdalena, Sonora. The team’s objective is to help residents slated for removal.

“I am an immigrant,” she said. “I had a long, long wait to get my documents.”

That’s why she does the work. But Roberts has no such personal history; she just helps.

“Sarah’s a fighter,” Martinez said, “and she knows a lot of things. She does everything to help the families.”

The COVID-19 pandemic put a halt to in-person clinics, but a new campaign has emerged from KTT: Pima County Justice for All. Its goal is to put on the 2022 ballot an initiative to grant access to public defenders to indigent Pima County residents who face detention or deportation. Proponents report that Tucson’s immigration court processed nearly 24,000 cases last year, and 98% of them went to court without legal representation or counsel. Most of them ended up deported.

“These are families, friends and neighbors,” reads the campaign’s mission statement, “who have been … paying into our tax systems and helping build our communities, for years.”

You’ll see more of Justice for All — universal defense — in the near future. It’s a cause for which Sarah Roberts would encourage us all to stand in solidarity.

Christine Wald-Hopkins, a former educator and occasional essayist, has long been a book critic for national, regional and local newspapers. She now writes Southern Arizona Authors with a colleague.

The Pima County Library has a list of book recommendations by Asian American and Pacific Islander authors.