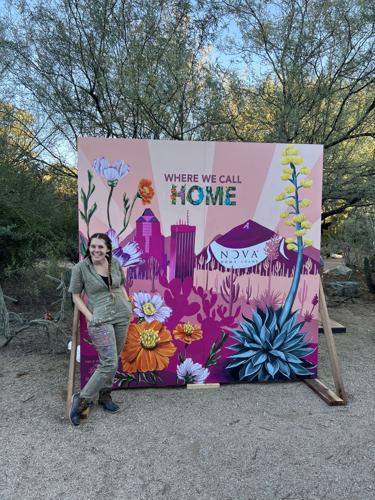 Muralist The Desert Pen, also known as Pen Macias, poses with her new cityscape and wildflower mural at the Tucson Botanical Gardens. 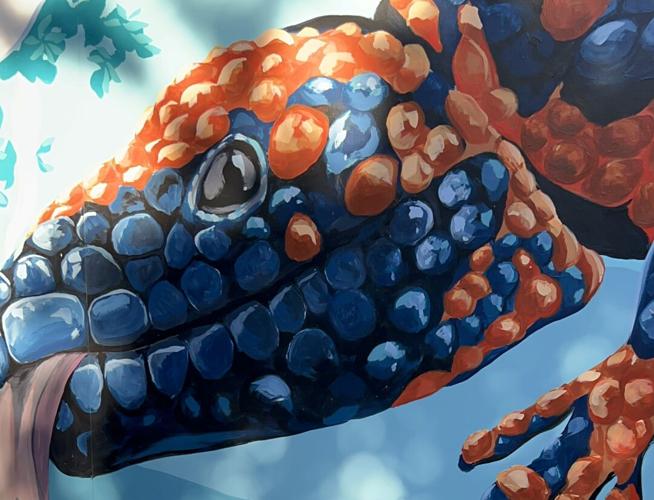 A close-up of the Gila monster mural at Reid Park Zoo. The mural was created by The Desert Pen for the "Where We Call Home" giving campaign hosted by NOVA Home Loans. 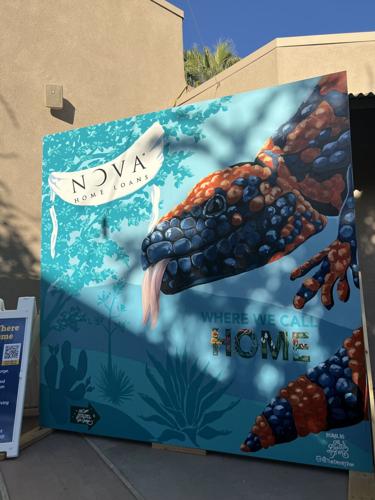 The full Gila monster mural at Reid Park Zoo. The mural is a part of the “Where We Call Home” campaign by NOVA Home Loans.

Say cheese, Tucson! A local campaign makes helping local nonprofits as easy as one, two, three, with a quick and fun photo opportunity.

The “Where We Call Home” giving campaign hosted by NOVA Home Loans helps four local nonprofits every time Tucsonans snap photos of one of two new pop-up murals and post them on social media.

The murals, created by local artist The Desert Pen (aka Pen Macias), can be found at Reid Park Zoo, 3400 E. Zoo Court, and the Tucson Botanical Gardens, 2150 N. Alvernon Way.

With each photo taken, posted to Instagram or Facebook and tagged with “#NOVAGiving” and “#WhereWeCallHome,” the company will donate $25 per post (make sure your post is set to public in your privacy settings) to be distributed among four local nonprofits. NOVA Home Loans will donate up to $150,000.

Last year, they donated $180,000 to local nonprofits, according to a press release from NOVA Home Loans.

The four nonprofits this year are Reid Park Zoo, Boys & Girls Club of Tucson, Youth On Their Own and Habitat for Humanity, according to NOVA Home Loan’s website.

The campaign is currently ongoing and runs until the end of January.

Each 8-by-8-foot mural is a desert-inspired creation painted by The Desert Pen, who spent approximately two weeks building and painting each one, she said.

“It's like a dream to have my artwork at the zoo and in the Botanical Gardens,” Macias said. “And they're so supportive and excited and amazing to work with. NOVA Home Loans is just so enthusiastic about art. …  I think what's really cool is, everybody wins. They're like, ‘We want to support the community. We want to generate some excitement in the community and we want to support art.’ So, how cool is that?”

A mural of a Gila monster is placed at the zoo, while one of a cityscape and wildflowers is at the Botanical Gardens. Macias designed the interactive Gila monster mural with kids in mind, so they can stand in front of the piece and look like the scaly creature is licking them or as if they are sitting on the lizard’s tail.

The Botanical Gardens mural was inspired by wildflowers sprouting from Macias’ own yard after she planted some seed bombs, she said.

“The two murals are obviously super different,” Macias said. “But I wanted them to sort of be tied together and so they both involve a monochrome desert. The Gila monster (mural) is like a turquoise-tones or blue-tones desert and then the Botanical Gardens are pink tones with a desert in it, so I thought that was fun to have a hidden Easter egg about them.”

Macias was inspired to create the commissioned pieces for a couple of reasons. One of them: her kids.

The second reason is because of the importance of places like the zoo and the Botanical Gardens in Tucson, which she called “anchors in our community.”

“What a cool opportunity to support our community and some of the very cool spots we have in town without it costing a single thing (to take the photo because) taking a selfie costs $0,” Macias said. “But it brings money to these super important cornerstones in our community.”

MOCA Tucson is currently seeking plant matter and inorganic debris from your yard, gardens and sidewalks for a new art installation opening next year. You can drop off items during MOCA's regular hours of operation.

Liz Baker-Bowman recounts how a seventh-grade science experiment, The Wishing Tree at the Winterhaven Festival of Lights, has become key in many life moments.

Now through Jan. 3, Tucson's Park Place Mall is home to two Giving Machines — vending machines that allow you to donate to local and global nonprofits.

A list of places in Tucson, Arizona to donate fresh and non-perishable food items this holiday season and year-round.

6 local makers and artists who give back to good causes

A list of local makers and artists in Tucson, Arizona who give back to good causes through donations from the proceeds of their handcrafted products.

Looking for something free to do in Tucson, Arizona this January 2023? Check out FREE museum days, movie screenings, live music, Dillinger Days and more in the Tucson, Marana and Oro Valley areas.