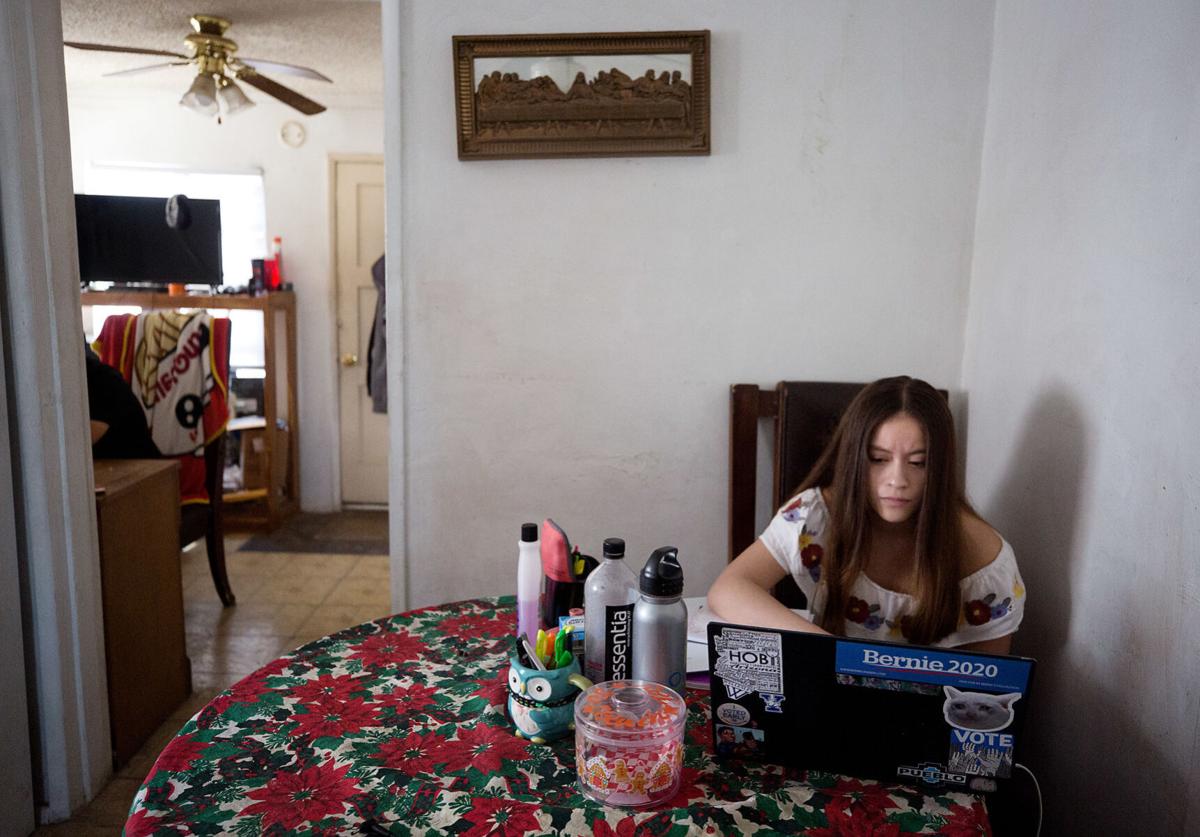 17-year-old Yakeleen Almazán and her three siblings have been raised by their grandparents for several years. 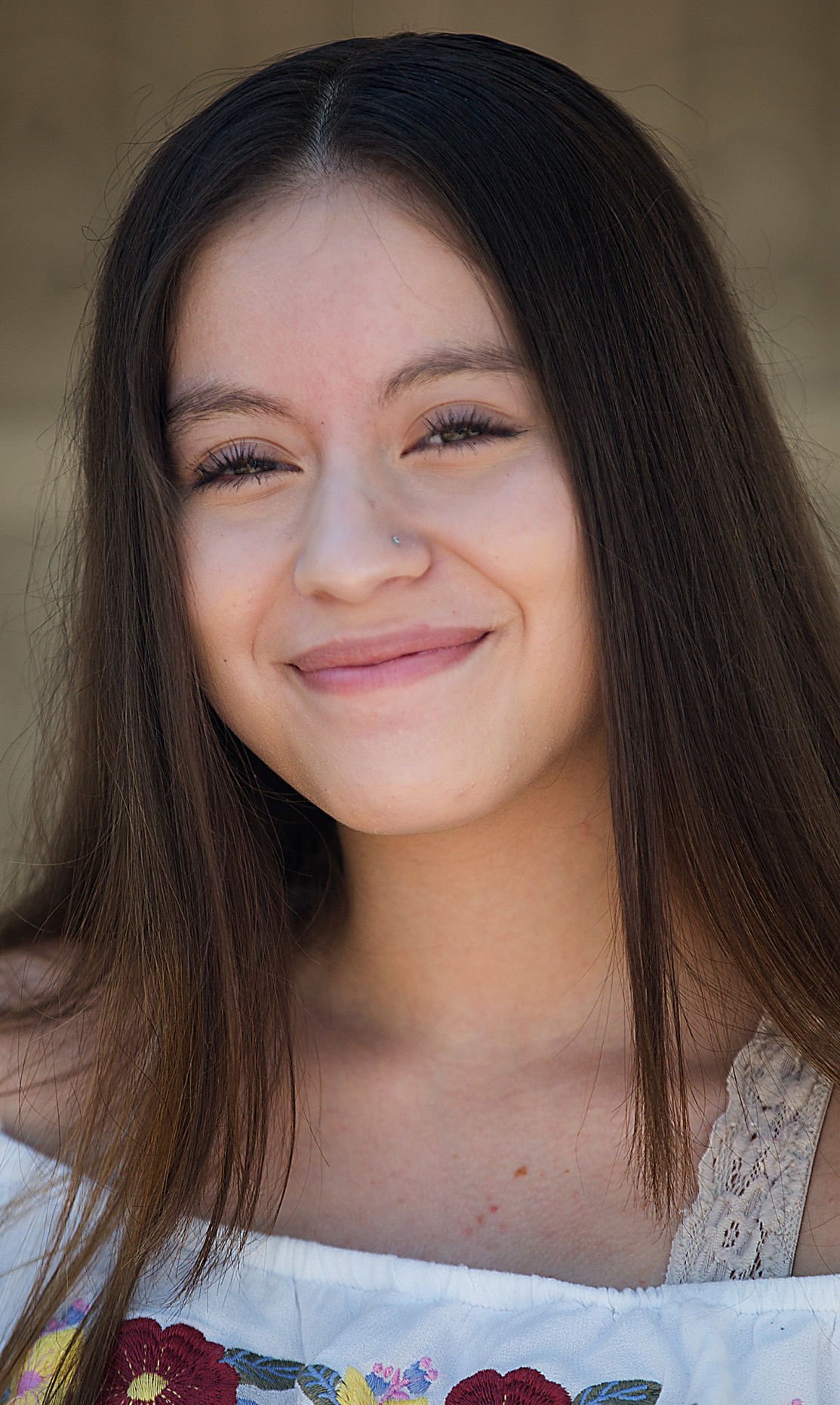 Yakeleen Almazán lived in the midst of domestic violence, was raised by her grandparents, studies, works, helps and hopes to be a politician. 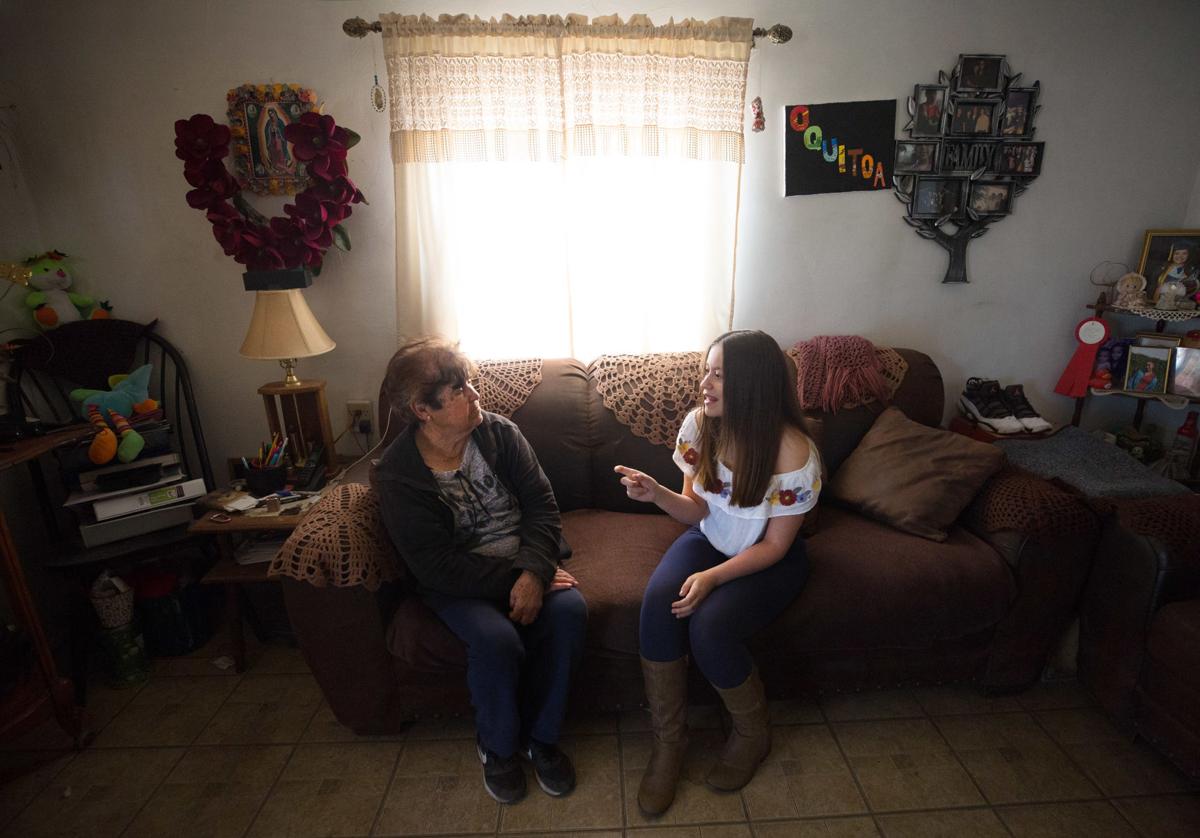 Yakeleen Almazán talks with her grandmother, Concepcion Almazán, at her home in Tucson on March 10, 2021. Almazán is valedictorian of her class at Pueblo High School and will attend Yale University. 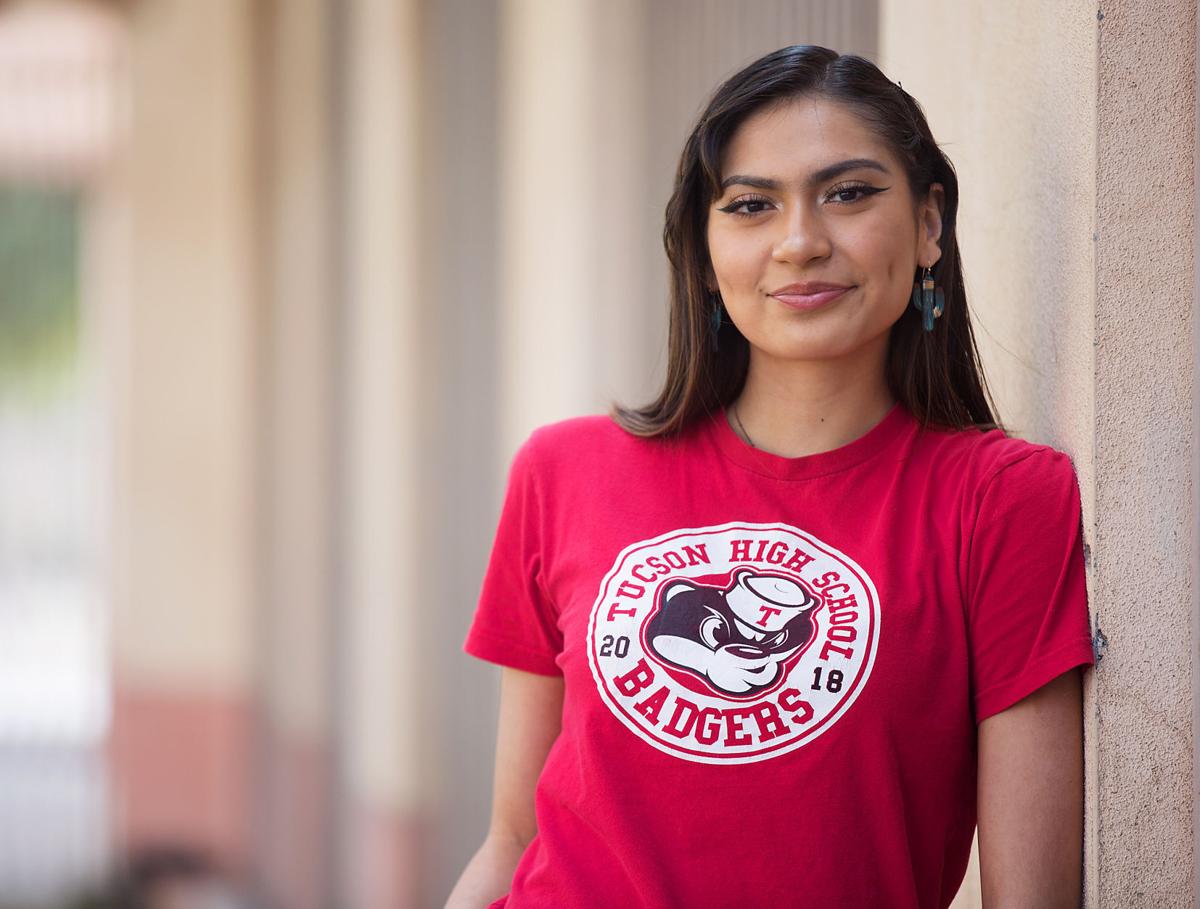 Whether Yakeleen Almazán is talking about her full-ride scholarship to Yale or the national student action group she co-founded during COVID or her advocacy work to increase the political efficacy of the Latinx community, she’s warm and vibrant — a teenager who knows exactly where she’s going and why.

“Legislation has a lot to do with every aspect of life that a lot of people don't realize,” she says. “That's why I continue these endeavors, to demonstrate that to people, and that they have a voice in it and especially in my community that has a lot of Mexican-American immigrants.”

The first time I met Almazán was during the height of public outrage over the killing of George Floyd and the national outcry to defund police. Tucson Unified governing board was considering removing resource officers from schools, questioning whether having them on campuses perpetuated systemic racism and trauma in a country where people of color are disproportionately targeted by the justice system.

In her capacity as co-president of Pueblo High’s MEChA, a social justice youth organization, Almazán helped with a petition that garnered nearly 2,400 signatures asking that officers be removed from school campuses. The board later voted to keep police on campuses in a more limited capacity.

We finally met in person last week on a windy Starbucks patio on the Southside, near the McDonald’s where Almazán works the night shift and near the home where her grandmother raised her and her three siblings. And close by is Congressman Raul Grijalva’s office where a year earlier Almazán realized what she wanted to do with her life.

The Pueblo High valedictorian is going to Yale in the fall to study political science, with a double major in either education or sociology.

Her impressive resume, which includes mentoring young students and peers through the Lapan College Club and Americorp, grassroots advocacy work for progressive policies and political candidates, serving as president of MEChA and Pueblo High’s science club (not only because she loves of science but also to increase Latinx representation in STEM) and founding the National Organization for Youth Activism, has earned her a full-ride to Yale, along with $25,000 for the national Horatio Alger Scholarship, and being chosen a finalist in the running for three other prestigious scholarships.

“During COVID, especially with all the time I had to reflect, I realized that I definitely didn't do all these things just to put them on my resume,” Almazán says. “I think a lot of it had to do with my love and desire to help people.”

Her grandparents, both Mexican immigrants, raised the four children after they were removed from their parents’ home in 2012 due to domestic violence and substance abuse when Almazán was 9.

“My internal motivation was to leave this mold that has happened in my family,” she says. “We have a history of domestic violence, at least going back four generations on my mom's side of the family. And so after I was displaced and both of my biological parents were incarcerated, I knew that I wanted better for myself and better for my family. And so I found education as my means to do so.”

When I ask Almazán if she knows what she wants to do with her life, she says yes before I finish the sentence.

When she first started high school, she wanted to become a researcher of molecular and cellular biology, but that all changed when she started knocking on doors in 2019, canvassing for then-mayoral candidate Regina Romero.

“I realized that the interactions that she had with her constituents and the tangible impact she had on my community felt different than me sitting in a lab with a lab coat on and a microscope,” she says. “It felt different. And to me, what personally fulfilled me was doing activism and was talking to my community.”

Around the same time, she served on Congressman Raul Grijalva’s Youth Advisory Council. She was one of a couple dozen students who gave input to the congressman on a host of issues, from LGBTQ rights to the opioid crisis.

“We would also write memos for him, so he could take it with him to Washington, DC, when he votes, because he would essentially vote on our behalf,” she said.

Almazán was emboldened to see Latinx leaders affect public policy and represent their broader communities. And she loved Grijalva’s office and the community center next to it.

“It felt like a second home to me,” she says. “And being in the middle of my community and having that interaction with the people he served, that's when I realized that that's what I wanted to do.”

So she’s going for a career in politics, including one day running to represent Grijalva’s district, Congressional District 3.

When the pandemic hit, Almazán felt like her life was put on hold as all her extracurriculars came to an abrupt stop and school moved online. And her family had some challenges.

She had a laptop she bought with money from a summer research internship at the UA, but her younger siblings didn’t have any for online learning. And even when they eventually got laptops through TUSD, it took time for them to get used to remote school.

Then Almazán’s grandfather died in June. They were already a low-income household, and without her tata, money was even tighter.

So Almazán got a job and began contributing to the household expenses. And while it was hard to see her siblings struggle with remote learning, the time brought them closer as they were all at home together.

Without rushing around all day, Almazán started measuring the success of each day by the number of people she was able to help, even if it was just helping a fellow student on a homework assignment.

“It made me genuinely happy to help other people around me achieve their own goals, to be their own leaders and be good students.”

Azul Navarrete-Valera is another Tucson teen focused on helping young people realize their potential as community leaders, through work she’s doing with The Youth Advocacy Group.

“Everybody's a leader, but how are you gonna find what type of leader you are?” she says. “That's what we're trying to do. We're trying to make it easier and help as much as possible.”

The Tucson High senior is the co-president for the Tucson Native Youth Council, and she teaches non-violence and nonviolent activism through the Nonviolence Legacy Program.

As a Latinx youth leader, Navarrete-Valera is working to empower young leaders and increase youth representation for native communities and minority communities.

“It's not right to say that they will be better leaders of tomorrow — no, they’re the leaders of today,” she says. “I want to spread that message as much as possible because it's really important for you to be empowered now rather than later.”

Before COVID, Navarrete-Valera had been attending a ton of meetings — clubs, advocacy work and orchestra, playing violin. When they were all reduced to Zoom meetings, she found it hard to stay motivated. She missed fundraising for the orchestra and international conferences, and even being able to tell if a friend needed cheering up — something that’s harder to see through a screen.

Being an only child, she felt isolated and even struggled some days to find a reason to get out of bed. But she got inspiration from her mother Patty Valera. Navarrete-Valera watched her mom, a social worker at the VA, get up every morning, eat a healthy breakfast, workout and help people at her job.

“She’s definitely a person to look up to,” Navarrete-Valera says.

Her mom kept telling her to do a routine. Navarrete-Valera started going to the gym every day once they reopened, eating healthier, and preparing to head to college in the fall, where she plans to study law and become an immigration lawyer.

For Almazán, losing the sense of routine was also a hurdle she had to overcome during the pandemic. She started questioning her purpose.

She’s began volunteering with the Fight For Her Foundation, an organization that advocates for women’s reproductive health and rights around the world.

And though she found it challenging to do grassroots organizing without seeing people face to face, the people she met through this work became friends, and they all dream of the day that they’ll meet in person.

Adapting to screen life, Yakeleen misses seeing her teachers and the people she does community organizing with, but she’s inspired by them and that “si se puede” attitude.

“It was getting really hard during the pandemic,” she says. “They all demonstrate it to me — especially with my past — you did it once you can do it again.”

Women of the pandemic: A swing toward female leadership in Arizona politics

The list of talented and intelligent women in publicly elected positions in Arizona grows with each election year.

Local women who are helping unravel the tangled threads of mental health throughout the pandemic while simultaneously dealing with the affects of COVID-19 in their own lives.

We are celebrating International Women's Day through the stories of our resilient neighbors,…

With many students transferring to charter and private schools during the pandemic, some schools could no longer sustain the teaching positions.