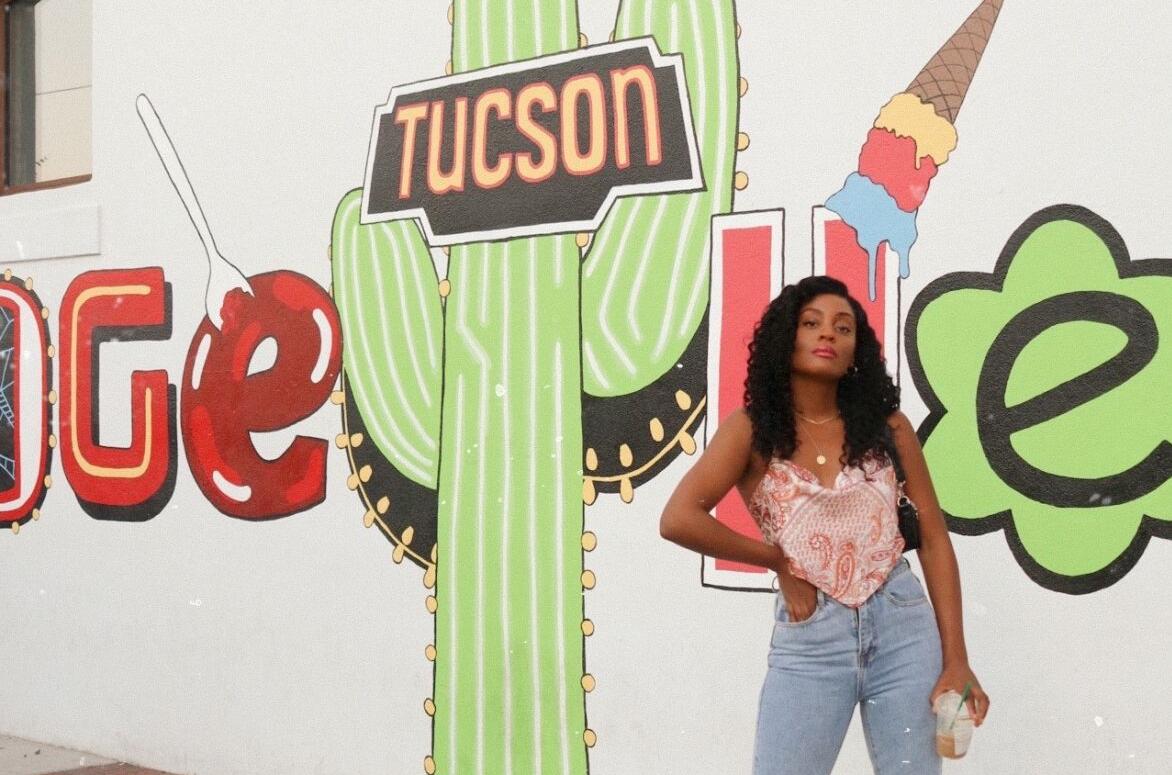 Aiesha Beasley currently has more than 82,000 followers on TikTok. 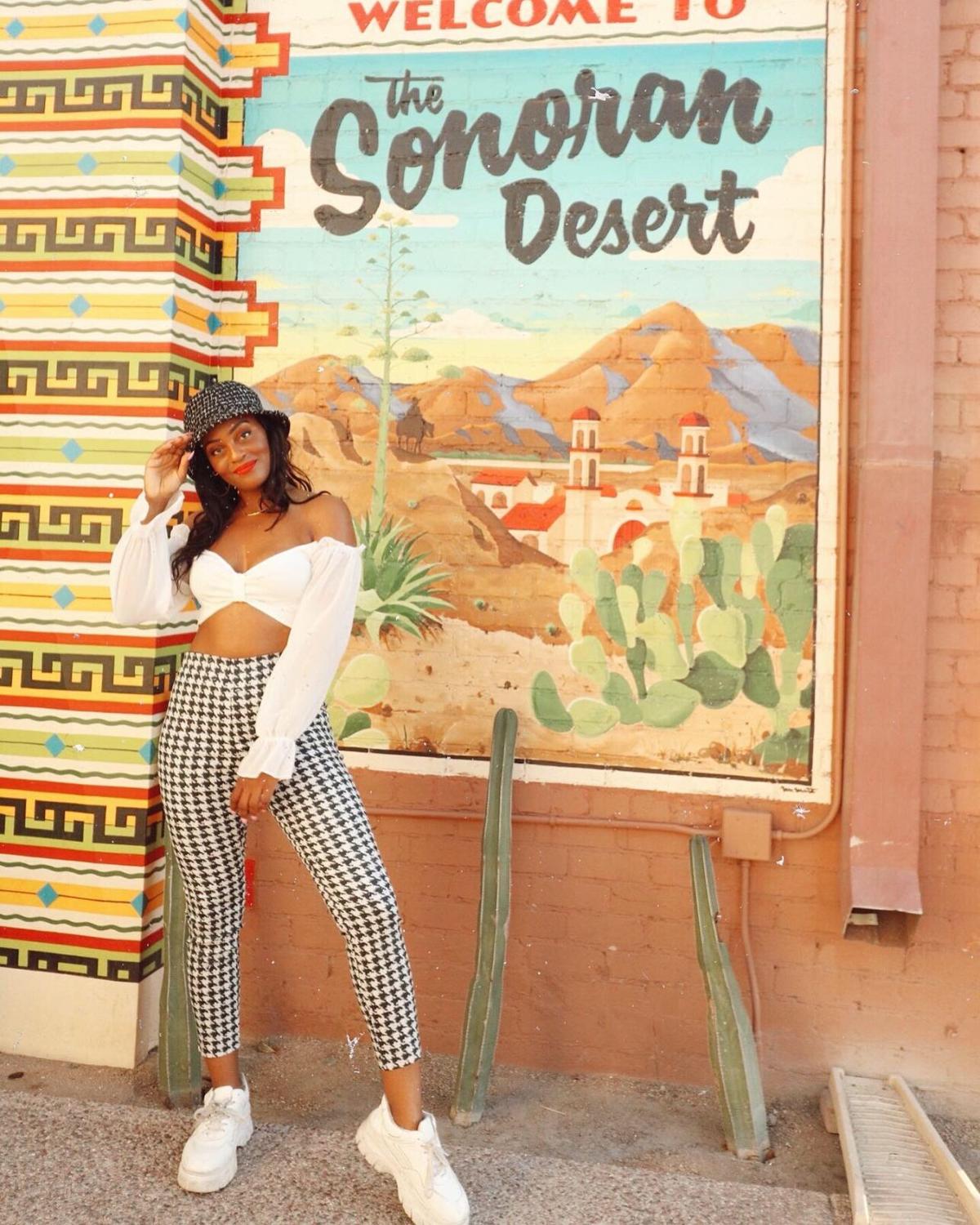 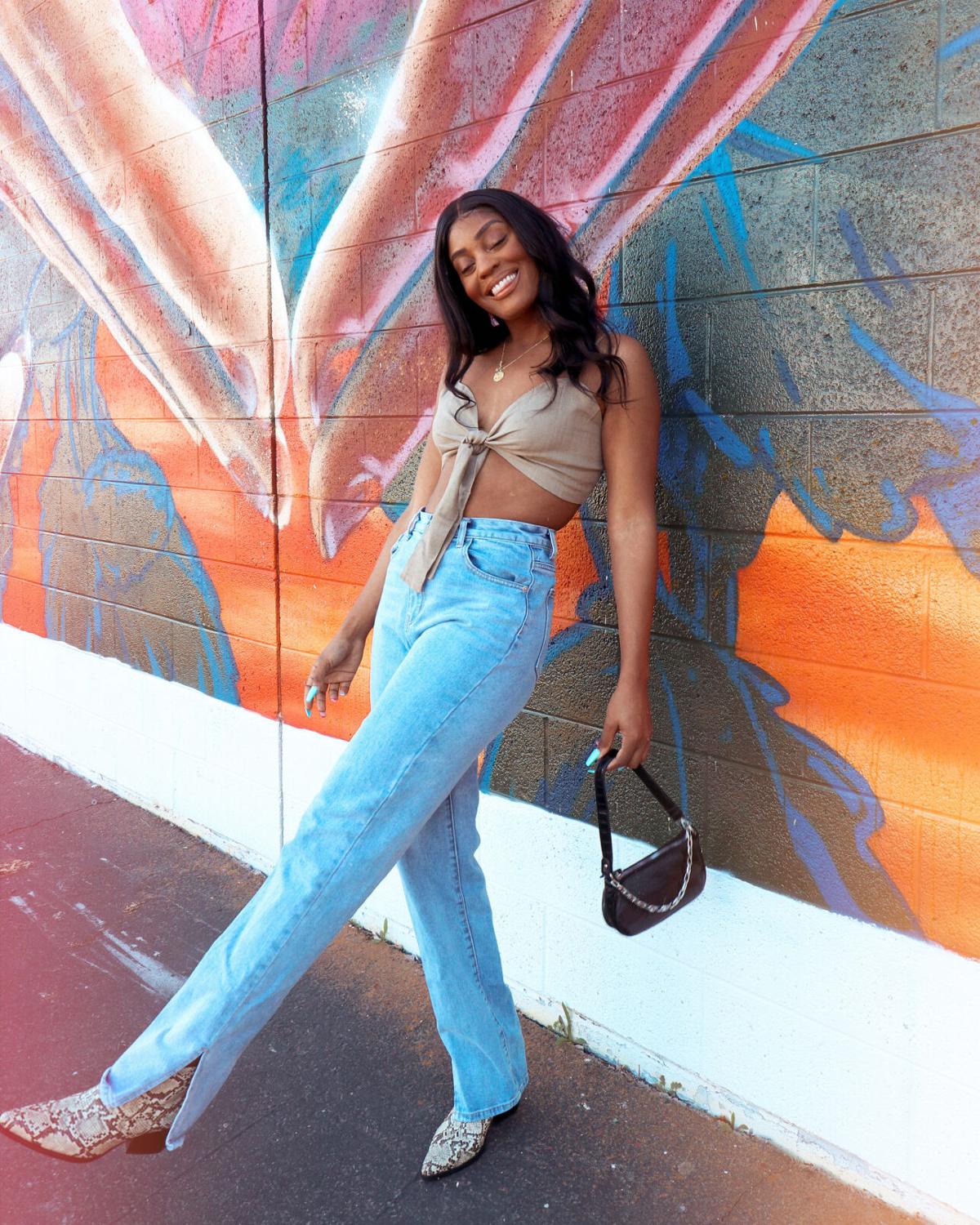 One of Aiesha Beasley's first TikTok videos that got a lot of attention was taken at Little Anthony's Diner on Tucson's east side. 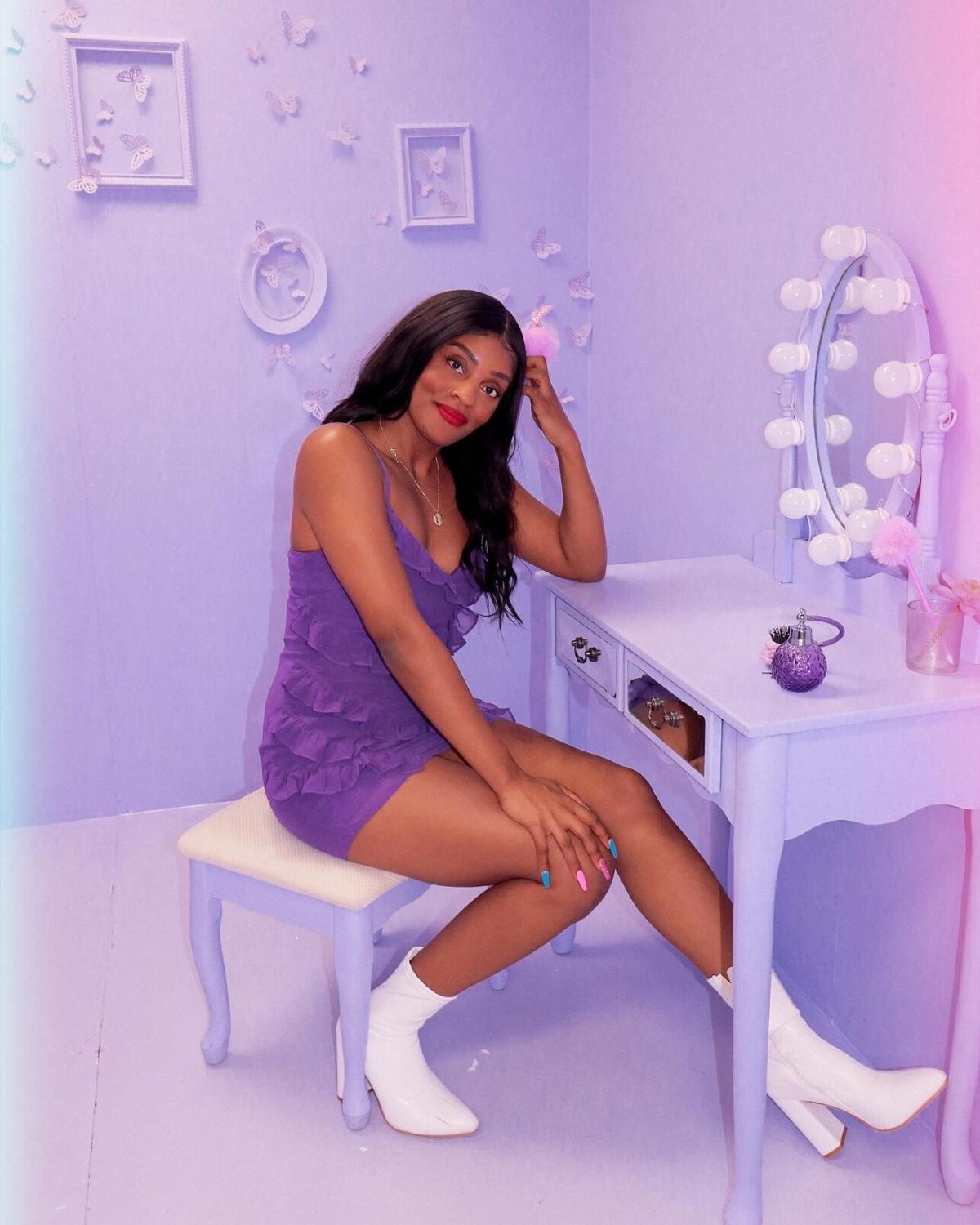 Aiesha Beasley says she discovered a love of Tucson through content creation.

Aiesha Beasley currently has more than 82,000 followers on TikTok.

One of Aiesha Beasley's first TikTok videos that got a lot of attention was taken at Little Anthony's Diner on Tucson's east side.

Aiesha Beasley says she discovered a love of Tucson through content creation.

While furloughed for three months during the COVID-19 pandemic, Tucson native Aiesha Beasley decided to amp up her work on TikTok.

Though she officially started her account during the summer of 2019, she didn’t pay much attention to it and only had 60 followers by the time the world seemingly shut down amid the coronavirus crisis.

“I wasn’t expecting to grow that fast,” she says.

Beasley initially used TikTok, a wildly popular video platform, to post comedic videos and share her love for Korean pop. But now, many of her videos take her followers on a journey through the many hidden gems throughout Arizona.

Although Beasley moved to Phoenix about a year ago, her TikTok account features lots of Tucson favorites including Rajin Ramen, American Eat Co. and El Jefe Cat Lounge.

“One of my first videos that took off was of Little Anthony’s Diner in Tucson,” she says. “I didn’t expect that to blow up.”

It got so much attention — it has more than 187,000 views at the moment — that Beasley says a restaurant employee reached out to her to tell her that customers said they were visiting the restaurant after seeing it on TikTok.

“I was like, ‘OK, maybe I should share some more stuff I find and cool places that I love,” she says. “I always feel like there’s this stigma, especially when you’re born and raised in Arizona, that it’s boring and there’s nothing to do. I had that mentality too, where you’re stuck and stagnant.

“But when I started posting content, I was like, ‘Tucson’s not that bad.’ It’s no LA, but there are some cool spots. From exploring and finding cool spots myself, I discovered this love of Tucson through content creation.”

Beasley says people have messaged her words of appreciation for helping them find Arizona’s lesser-known gems.

“I was wanting to get back into blogging. Back in 2009, 2010, I had a Tumblr account, so I was posting inspo photos and a little bit of my fashion back then,” she says. “I had a friend at the time who inspired me to start posting fashion photos on Instagram, so I said, ‘OK, I’ll give it a go.’ I was just sharing my adventures living in Tucson and a little bit of my traveling back then and it kinda grew from there.”

Below are six other TikTok users that have growing followings and Tucson ties:

♬ try to be cool but eh - yunnizhai

Tucsonan Scott Hubbard has more than 6 million followers on TikTok.

To be fair, Hubbard and his dog Gracie have more than 6 million followers on TikTok.

Hubbard's TikTok account is filled with hilarious videos of Gracie — videos of her "dancing" to trendy songs while sporting the cutest pair of sunglasses, a video of her dressed as singer Billie Eilish, and one of her being wrapped up like a Christmas gift.

Gracie, who is a chiweenie, has gotten so much fame that someone even got her face tattooed.

All together, Hubbard has close to 180 million likes across his TikTok videos.

Volare Helicopters, a company started by Tasha and Tyler Sturges in 2017 that offers helicopter flights above iconic Tucson spaces such as Gates Pass, Mount Lemmon and downtown Tucson, made its TikTok debut in early 2019.

Since then, the company has garnered close to 369,000 followers and more than 3 million likes. Tasha Sturges says their viewers come from all over, with a large following from people in India.

"Aviation is a niche category and there aren't a lot of other accounts posting stuff especially about helicopters," Tasha Sturges said in an email.

The videos, some of which have gone viral, have taken followers above Tucson's airplane boneyard, Casino del Sol and Sky Harbor Airport in Phoenix, plus some more behind-the-scenes videos of skydiving, flight training and the helicopter itself.

6 beauty mistakes you’re most likely making 🧖🏽‍♀️ #beautytips #4u #4upage #fyp #skincaretips #skin #beautyhacks who is guilty of some of these?

Tucsonan Adaleta Avdić posts fashion and beauty videos from skincare tips to having her more than 352,000 followers choose what press-on nails she should wear.

Among her most-viewed videos are about the cons of makeup wipes, common beauty mistakes, and a tutorial on how to properly use the Mario Badescu drying lotion. She's even posted a few videos of Tucson wildlife.

Avdić, who also has a large following on Instagram, has more than 1 million likes across her TikTok account.

This account takes its followers through Danny's adventures through Tucson — with some videos showing off desert critters and some local favorite eateries including Baja Cafe and Omar's Hi-Way Chef.

A few of Danny's videos — of a mouse escaping a snake — have reached millions of views.

According to his bio, Danny is a combat veteran who has more than 22,000 followers and more than 1 million likes across his videos.

There are also a handful of videos geared toward dermaplaning and facials.

The account, which posted its first video in May of last year, has close to 17,000 followers on TikTok with more than 540,000 likes.

Tank's Green Stuff has organic compost and soil products. The company is located in Tucson, with products sold around the state.

While Tank's Green Stuff doesn't have too many TikTok videos, the account saw a spike when a video posted last month about what to plant in Tucson in February reached more than 538,000 views.

32 delightful things to do in Tucson this March 🌼🌱🐥

Things to do this March 2021 in Tucson, Arizona including virtual events, drive-ins, drive-thrus, open-air events, at-home things to do and things to do with kids.

This 45-song playlist has big Tucson energy. Members get access to all 3 hours.

Enjoy a sample here and become a #ThisIsTucson member this month to get access to the full playlist.

BANDALOOP, which has performed all around the world, transforms the sides of buildings, mountains and historical sites into stages for its graceful vertical dance performances.

18 local outdoor markets and art fairs to shop this spring

Things to do this March 11-14 in Tucson, Arizona including virtual events, drive-ins, drive-thrus, open-air events, at-home things to do and things to do with kids.

9 things you must do when you move to Tucson

Whether you're new here, or just looking for new things to do here are 9 ideas for getting to know Tucson a little better.