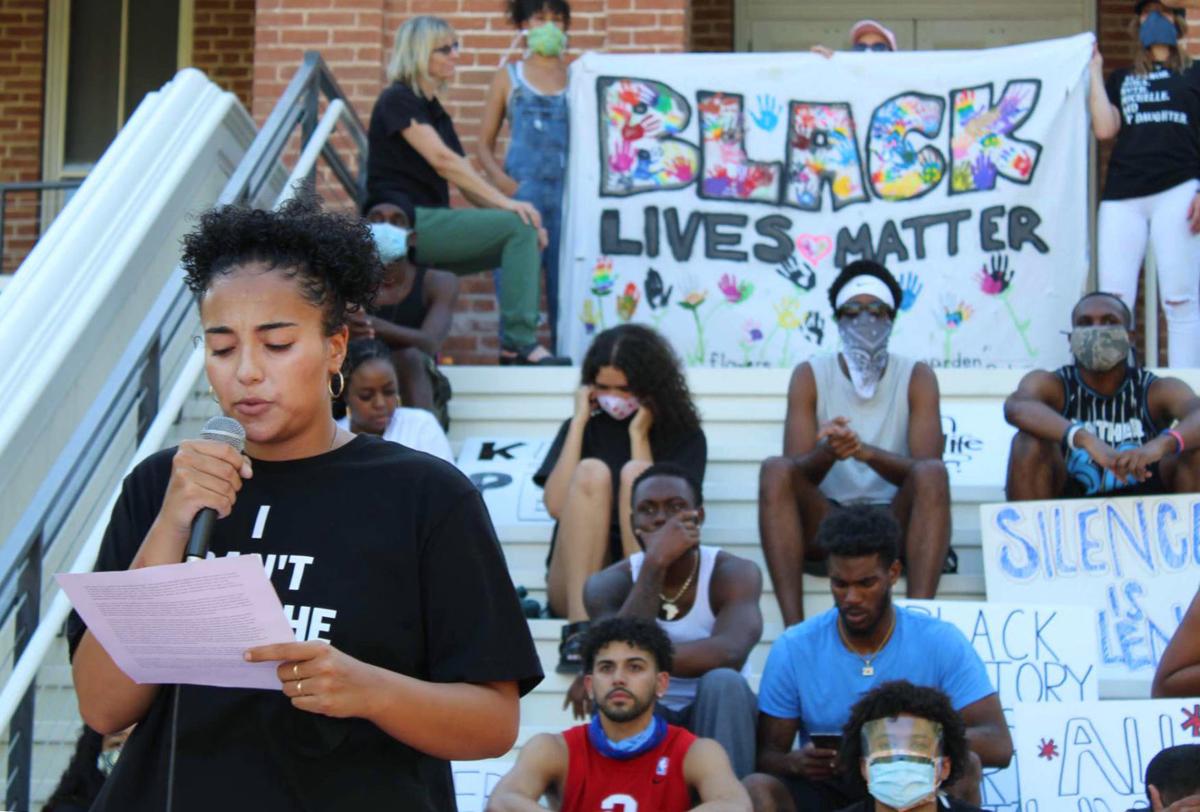 Mariah Barnett speaks at a March for Justice Rally at the University of Arizona. She and three other UA students organized the event. 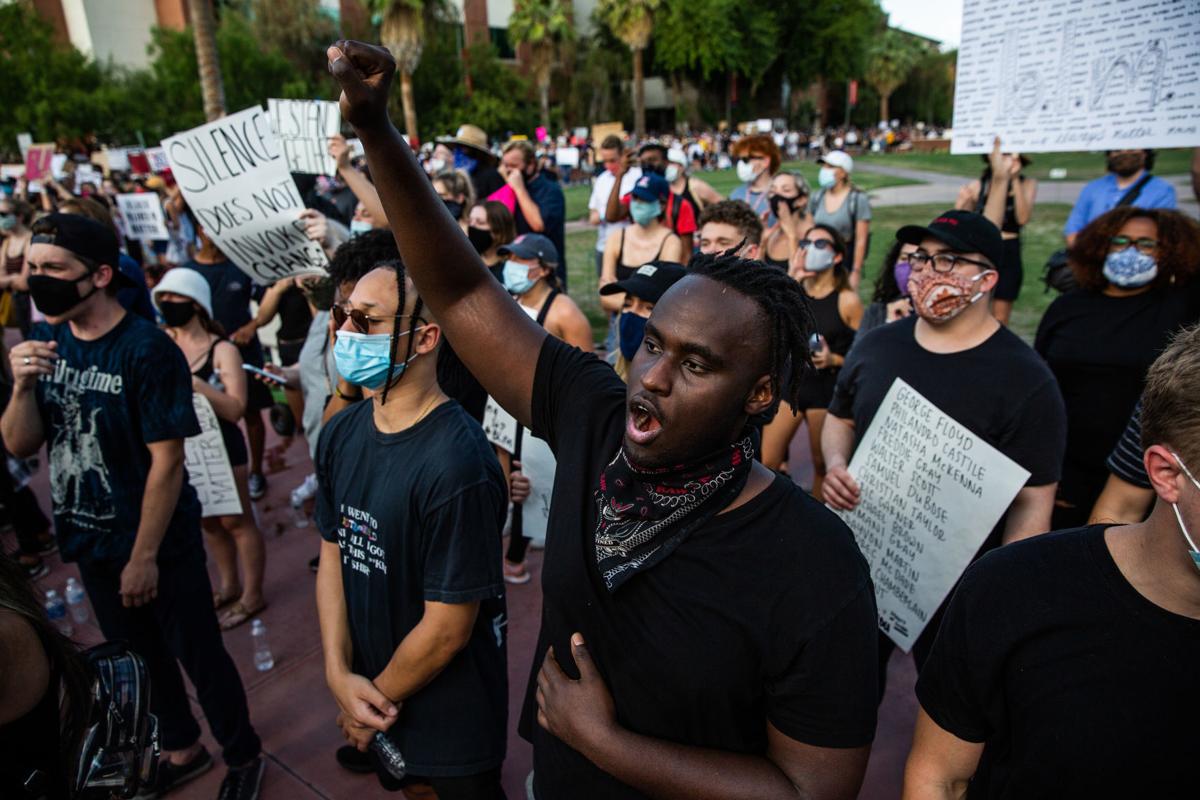 Andrew Kirima raises a fist in solidarity during a rally organized by March for Justice outside Old Main on the University of Arizona, on June 3, 2020.

Mariah Barnett speaks at a March for Justice Rally at the University of Arizona. She and three other UA students organized the event.

Andrew Kirima raises a fist in solidarity during a rally organized by March for Justice outside Old Main on the University of Arizona, on June 3, 2020.

When Mariah Barnett writes a speech, she sits on the floor of her bedroom and lets her ideas flow.

The result teaches her supporters about some of her life experiences and about the criminal-justice system, the prison system and other inequalities Black people experience in America.

“I remember the first time I was called a n-----. Fourth grade,” she told a group of protesters the night of May 30 in a speech about what it’s like to be Black in America. “From a very young age you are reminded of your differences, and throughout the rest of your life, you will continue to be reminded.”

Barnett, 21, is a UA senior majoring in political science with a minor in Africana studies. She’s written several papers for classes about these topics and has always been outspoken and used social media to bring awareness to issues she cares about, she says.

She includes statistics in her speeches because they stand out in people’s mind, she says.

Until a June 3 rally in front of Old Main at the University of Arizona, Barnett had never helped plan a big social justice event before. She’s one of four young Black women, all UA students, who created March for Justice recently and within four days planned a rally that drew 1,800 people to the UA.

Now, the group is planning its second event this Friday, June 19. Juneteenth: Institutionalized will be at the MSA Annex with a limit of 1,000 attendees who are required to RSVP before the event, according to the event’s Facebook page. With the Tucson Annual Juneteenth Festival canceled this year because of COVID-19, this event appears to be the largest Juneteenth event in Tucson this year.

Juneteenth commemorates June 19, 1865, the day slaves in Galveston, Texas, learned about the Emancipation Proclamation, making them among the last to be freed. The proclamation was effective Jan. 1, 1863.

Bullying got worse during 2016 election

Barnett was born in Sierra Vista, and her family moved to Marana when she was 8 years old. The racist incident she experienced in fourth grade was the first of many, most of which she experienced at Marana High School, she says.

The racist bullying got worse her senior year of high school in 2016, as tensions heightened with Donald Trump running for president, she says.

“People would tell me to go pick cotton or they would call me the N-word or throw pencils in my hair,” she said.

She said people waving Confederate flags and Trump flags would chant, “We hate Black people” and write things on her car.

Marana High School banned the Confederate flag from campus in 2016, saying it was disruptive and created an unwelcoming environment for students and staff workers of color, according to Arizona Daily Star archives. Some students blamed Barnett for the school’s decision, which led to backlash against her and her family, she says.

“She was at a point where she was tired of it and she wanted to speak up, and there was nothing that was going to stop her,” Stacey Barnett, Mariah’s dad, said of the flag situation. “It was set in stone. And so she spoke up and she suffered a lot of cyberbullying, things like that, which was really hard on her.”

Barnett finished her last semester of high school online because the school couldn’t promise to keep her safe, she said.

She had to miss senior prom, graduation and all the milestones she worked hard for four years to reach, she said.

“It was a really hard time; it was really traumatizing,” she said. “But I think that’s definitely what led me to want to study political science and Africana studies because I want to be able to do something with that so the next kid doesn’t have to go through what I did.”

Barnett said she is still uncovering the psychological effects of her high school experience.

“I was literally bullied out of high school for being Black,” she said.

Getting involved in social justice

Barnett’s college experience has been vastly different from her high school experience.

Her freshman year, she joined the Building Leaders and Creating Knowledge (B.L.A.C.K.) Theme Community, a residential program that helps African American and African students transition into a predominantly white university.

Barnett is a member of the coalition of Black student organizations at the UA and worked at the MLK Center on campus.

She is also part of a research lab called the psychology of politics in inequality, where she helps conduct research on people’s brains and how they react to questions about race, she said.

“I really turned my life around, and I took what I was given and I flipped it,” she said.

Barnett will graduate a semester early this December and already has a job lined up with Teach for America.

In her teaching role, Barnett said she will deal with educational inequities linked to the school-to-prison pipeline, which she believes is one of the biggest threats to Black lives right now.

Creating systems that work for all

While protests in Tucson have subsided, Barnett said it’s important to keep the momentum and not celebrate too early.

The arrest of the four Minneapolis police officers involved in George Floyd’s death is just a small step in the right direction, but there’s still a lot more to accomplish, she said.

“We know it’s not a celebration because George Zimmerman was arrested too, and nothing came of that,” she says, referring to the man who was acquitted of killing Trayvon Martin, an unarmed 17-year-old, in 2012.

She says the fight for justice and equality is far from over, and she hopes the movement leads to the dismantling of police forces in the United States. And that’s just a start.

“I think the education system, the political system, the economic system, they all need to be dismantled,” she says. “And we need to create new ones in their place that actually cater to everyone because none of those systems are accessible to all.”

She says it’s important for the anti-racism movement to be led by Black people. Anyone who isn’t Black can’t tell people what it’s like to be Black or what has to be done to make things better for Black people, she says.

Stacey Barnett said he’s proud of Mariah’s involvement in social justice issues and of her and other young leaders’ determination to create change.

“Just to hear her talk and be so passionate about this, it was just an unbelievable feeling,” he said.

When he saw Mariah speak, he said she reminded him of his father, who would give speeches at Juneteenth, Martin Luther King Day and Black History Month events when he was growing up.

“I hope and I know that they will stay involved,” he says. “And I hope that they never stop fighting as long as there are injustices and social issues going on.”

3 Juneteenth events in Tucson this Friday, virtual and in-person

Juneteenth commemorates the day that some of the last slaves were emancipated. Even with social distancing, Tucsonans are paying tribute.

Two Tucson, Arizona groups have used social media to organize donations to the Navajo Nation as they deal with COVID-19 to help get important supplies including sanitizer and disinfectant to rural areas where people are largely being helped by volunteers and not from federal funding.