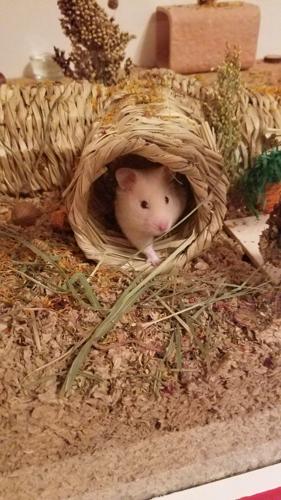 One of Home Sweet Hammy Home's small residents hides away in a hidey-hole. 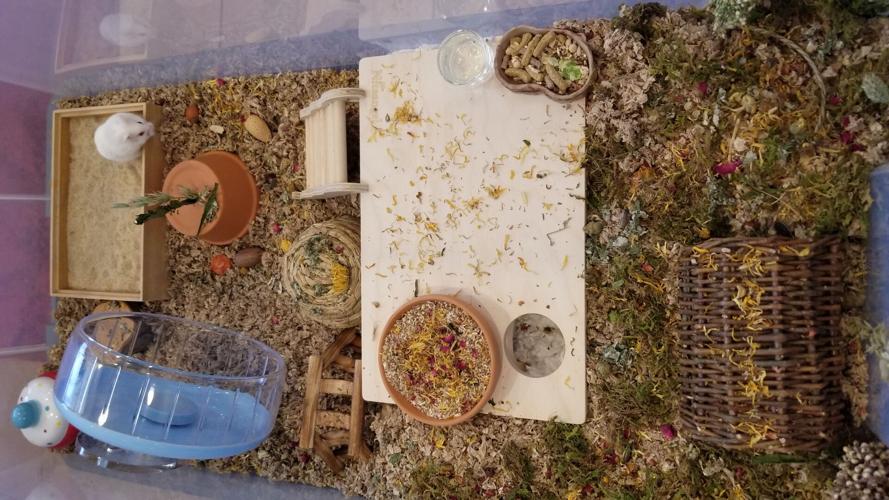 An inside look at one of the Home Sweet Hammy Home resident's habitats, complete with an adequate-size wheel, sand bath and plenty of chew toys. 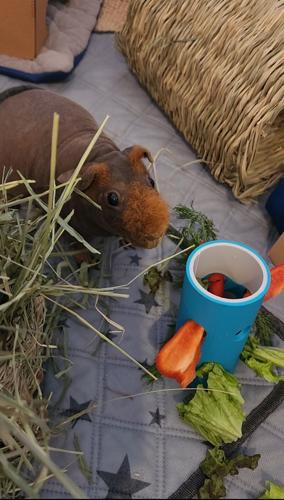 One of the guinea pigs at the Home Sweet Hammy Home Small Pet Rescue & Sanctuary. 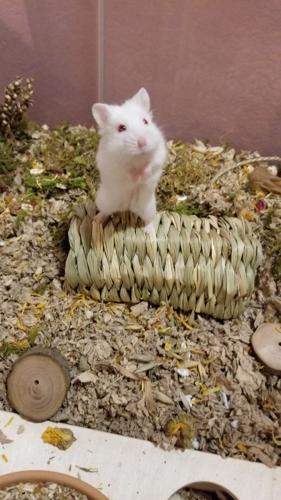 The downstairs area of King’s Tucson home is nothing short of a haven for small pets.

The area is filled with custom-built cages, some made from 50-gallon Sterilite Stacker bins with removable lids modified by King’s husband, Wayne. They have hardwire mesh material on top to ensure airflow and proper ventilation for the Home Sweet Hammy Home Small Pet Rescue & Sanctuary’s pocket-sized residents.

The roomy handmade cages are filled with a least six inches of fluffy paper bedding, various wooden chew toys and plenty of hidey-holes for the small pets to thrive in.

The Home Sweet Hammy Home Small Pet Rescue & Sanctuary was founded by King, a former volunteer at an animal shelter and a lifelong small-pet enthusiast, in 2019. The rescue recently received its nonprofit status through the IRS.

While volunteering, she realized that local small pets, like hamsters and pet mice, weren’t getting the proper care they needed, or were getting overlooked altogether by possible adopters for dogs and cats.

The small pets often weren’t receiving the appropriate nutrition or housing space while in the shelter or after adoption, according to King. The reasons? Budgetary restraints and lack of small-pet care education, she says.

“I also noticed that the shelter staff and other volunteers and people who adopted their little animals didn't actually know about their care,” King says. “And so I would try to teach them and they'd be like, ‘Well, we can't make that be an adoption requirement.’ And I would be a little bit irritated and say, ‘Well if I ever started a hamster rescue, I can make up the requirements.’ And that's what I did.”

Since King started her rescue and sanctuary a few years ago, she has rescued 111 small pets who have either been adopted out or have found sanctuary and lived out the rest of their days in King’s home.

The name Home Sweet Hammy Home was inspired by King’s husband, who would come home from work, stumble upon another cage with a new furry friend and say, “I just walked into home sweet hammy home,” she says.

“My husband is my hero. Not very many men would allow their home to be used in this way or their wives to devote 75% of their time doing what I do,” King says. “On his days off, he builds my big wooden cages, fixes anything that breaks and attaches hardwire mesh to the lids of my bin cages. (A) total blessing.”

A different kind of experience for adoptees and adopters

For King, small pets deserve the same amount of love, care and attention as larger ones. For every rescue she takes in, she provides them with a large home filled with plenty of food and activities for them to thrive in, along with proper veterinary care.

“People are just floored when I say that I have to take a hamster to the veterinarian,” King says. “They're like, ‘It's not a dog. It's not a cat.’ It's still a little animal that needs trained veterinarians to diagnose and treat them.”

After the intake process, King does a thorough rehabilitation process with each small pet to help them adapt to a well-suited environment and get a clean bill of health from a local veterinarian at the Arizona Exotic Animal Hospital.

Most of the small pets that King has taken in within the last couple of years have been local, from shelters, Craigslist listings or even from a few local Petco stores. But when some hamsters were set to be euthanized at a shelter in California, King stepped in and provided them a safe haven at her home until they could be adopted.

She currently has 15 more hamsters on a waiting list for her in California, too. But she says she can’t care for more than 40 small pets at a time to ensure top-notch care for her residents.

Although the adoption process is longer than going to a chain pet store where you pick out a small pet and simply bring it home, King’s process helps guarantee that the adoptees are going to a small-pet-savvy home.

The big box experience that places hamsters in cages that are too small with improper nutrition can suppress their natural behaviors, King says, which sets them up for failure “health-wise,” leading to behavioral problems.

King provides each possible adopter with educational information during the adoption process that covers what small pets need to be happy and healthy. Some topics include cages, enrichment activities, proper diet and, of course, a list of some small-pet no-nos.

“Some of them can get through it (the education component) real fast,” King says. “So I furnish them with everything and it's up to them to go through it all and then contact me back when they're ready to proceed. Sometimes I don't ever hear that from them and sometimes they call me within the week, or sometimes it's even like a couple of days. It's even been like 24 hours before.”

Despite the more thorough process, adoptions through Home Sweet Hammy Home aren’t few and far between and she says more adoptions are currently in the works. So far, she’s had adopters from Tucson, Phoenix and Sierra Vista, to name a few.

Since many small pets are asleep during the day and up all night, it’s too challenging to have volunteers help at the in-house rescue and sanctuary at all hours of the day.

Instead, community members can help by purchasing items from the rescue’s Amazon wishlist or by making a tax-deductible donation to Home Sweet Hammy Home to help King keep saving local and out-of-state small pets.

“I think maybe people don't really see hamsters in the life that they deserve,” King says. “They see them as children's pets, as something to be set up on a shelf and in a little cage. And, you know, they don't really take into consideration that they need so much more than that. ... So that's my goal, to teach everyone that contacts me, whether they adopt or not, whether they back out, whether they get approved, or whether they decide to go with another route. I just want everyone to be fully aware of what it takes to make them healthy and help them thrive and set them up in the right kind of cage from the beginning.”

This group is hosting free soccer camps this summer for queer, trans and allied youth

A local aspiring nonprofit is hosting a series of free soccer workshops this summer for queer, trans and allied youth in Tucson, Arizona.