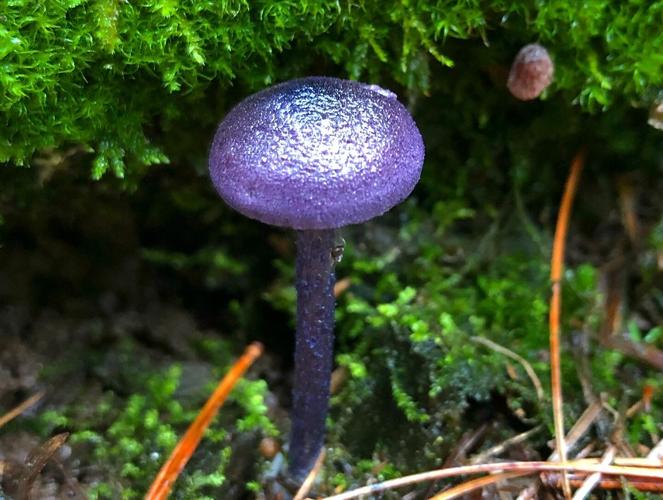 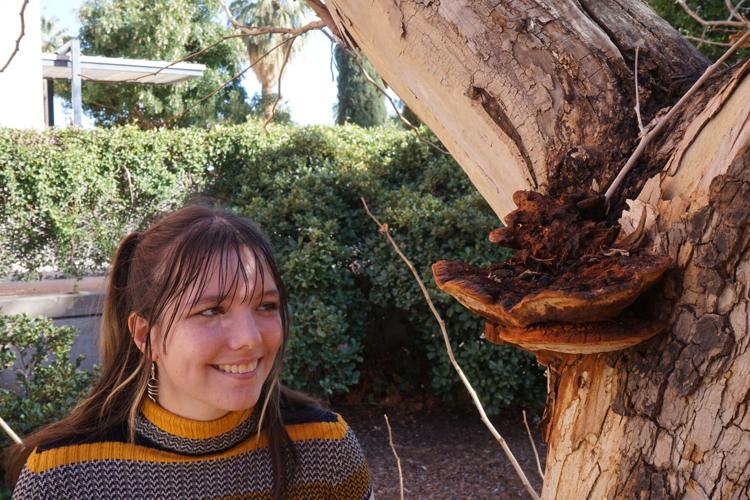 Caitlin Dowd, a senior geology major at the University of Arizona, is the president of the campus MycoCats club. 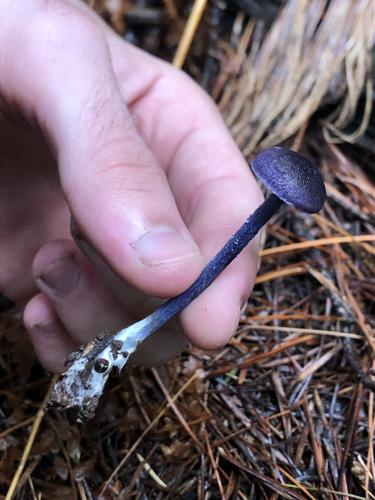 The Arizona Mushroom Society identified the mushroom species, which had never been documented in Arizona.

It was a warm July afternoon near the Bear Wallow Campground in the Santa Catalinas when Caitlin Dowd crawled over a log and saw it.

Dowd, a senior geology major at the University of Arizona and president of the campus MycoCats club, found the rare mushroom on a foraging expedition in the Mount Lemmon area last summer with two of her friends.

“I was poking around, trying to find something cool, and I saw this bright purple mushroom,” Dowd said. “And I was, like, ‘Oh my gosh, this is beautiful.’”

It’s not unusual for the MycoCats to search the landscape for mushrooms, and they are hoping for more mushroom-rich outings this summer if the rains cooperate. The club is all about the diminutive fungus.

“Not just cultivation, but things like foraging, mycomaterials, biosystems engineering, different things like that,” Dowd said. “Because mushrooms are truly essential.”

Dowd’s special find was on her second time out in the field and alongside two fellow fungus enthusiasts in the Catalinas. While her friends were crouched over a specimen, she crawled over a log where she discovered a rock with a brilliant purple mushroom cap sprouting from underneath.

“It’s probably one of the most beautiful things I’ve ever seen,” Dowd said. “I would compare it to a flower. Genuinely, it was gorgeous.”

After taking photos of the mushroom, Dowd and her friends used the online mycology resource Mushroom Observer to discover the species is known as entoloma occidentale variety metallicum — a radiant purple mushroom with a unique crossgill pattern.

Terri Clements, vice president of the Arizona Mushroom Society, identified the species and notified Dowd of its rarity. The species had never before been documented in Arizona and had only been sparingly found in Ohio.

“This is a beautiful species that is not commonplace and likely fruited last year as a result of our much-wetter-than-normal monsoon season,” Clements said. “Caitlin did a great job with photos of the mushroom in several stages of maturity.”

Clements asked that they collect a sample of the mushroom for DNA sequencing, as the species they had encountered was exceedingly rare. The next day, Dowd scrambled up the mountain and collected a sample.

Dowd soon realized that her discovery of the entoloma occidentale was one of only four known documentations of this particular species of mushroom in the entire United States.

Though Dowd loves studying mycology and foraging for mushrooms, she does not expect to go into a formal study of the subject and enjoys participating simply as a hobby.

“I’m never going to formally study mycology,” Dowd said. “I just truly don’t see myself diving as deep as others do and that’s OK. But I can be a citizen mycologist, a citizen scientist. I’m just never going to be like a true mycologist.”

Dowd expects that with the rain Tucson has recently received, more mushrooms could be popping up soon. Additionally, she said a pressure wave caused by the recent volcanic eruption in Tonga could make the monsoon season wetter than usual, signifying the possibility of even more mushrooms this summer.

The Climate Prediction Center also recently reported a 50-60% chance that Tucson could see an above-normal amount of rainfall from July to September this year, according to the National Weather Service Tucson.

The MycoCats are planning another hike to forage mushrooms on April 30, which is open to any UA or Pima Community College students. In addition, the Arizona Mushroom Society often sponsors forays and outings, and anyone is welcome to become a member.

Dowd intends on continuing her studies of geology and hopes one day to work for the National Park Service. She intends to work for an outreach program with the parks to be able to share her love of nature with others.

“Finding that mushroom was definitely insane for me,” Dowd said. “Knowing that I made an impact as a citizen scientist on mycology, that is a whole new high that I don’t think I’ve ever experienced in my life before. And it just makes me want to do more.”

Get involved in mycology with these mushroom hikes

Spencer’s Shroomery, a local mycology supply shop, is also planning a hike for the same day — open to the public. The registration page isn’t up yet, but you can find the shroomery’s website here.

Hernan Castro, The Desert Alchemist, has foraged wild mushrooms to eat and to heal for nearly a decade. He takes groups into the Mount Lemmon wilderness to discover a diverse array.

Four new business ventures are opening up in the Summerhaven community on Mount Lemmon this spring. The businesses include a new lodge, a wedding venue, a coffee shop and a scooter rental shop.

Bringing astronomy to Tucson streets: How this 19-year-old is sharing his love for space

Zane Landers, who has constructed 15 telescopes, has shared his love of astronomy with thousands of people this year, through his effort dubbed Arizona Sidewalk Astronomers.

What to do for Earth Day 2022: Check out plant sales, a 5K at Biosphere 2, trivia night, conservation activities and more.

Cactus blooms in Tucson are showing off this spring, preparing us for the beautiful saguaro blossoms that typically start blooming in mid-May. Here are some of the cactus blooms we've seen this year!

What's yellow, green and beautiful during Tucson's spring seasons? Palo verde trees! Learn about their seeds and flowers, how they may or may not contribute to seasonal allergies and more.

The Bookworm Path at Mission Garden in Tucson provides a hands-on outdoor learning experience for local children. The path features 20 mailboxes filled with books and activities for kids in grades K-12 to learn about the Sonoran Desert region.

‘Rainbows and smiley faces’: This UA student is working on her third clothing collection

University of Arizona student Julia Gray started clothing brand The Be Good Collection, "young and trendy with happy vibes," in 2020.

We ❤️ the smell of desert rain. Where does the scent come from?

A new paper by a trio of researchers tries to break down the smell of summer rain in the Sonoran Desert, and there’s more to it than wet earth and creosote bush. At least 60 different aromatic plants may contribute to the scent.

This year's wildflower season may be a little lackluster due to a lack of winter rains, but that hasn't stopped cactus blooms from showing off.