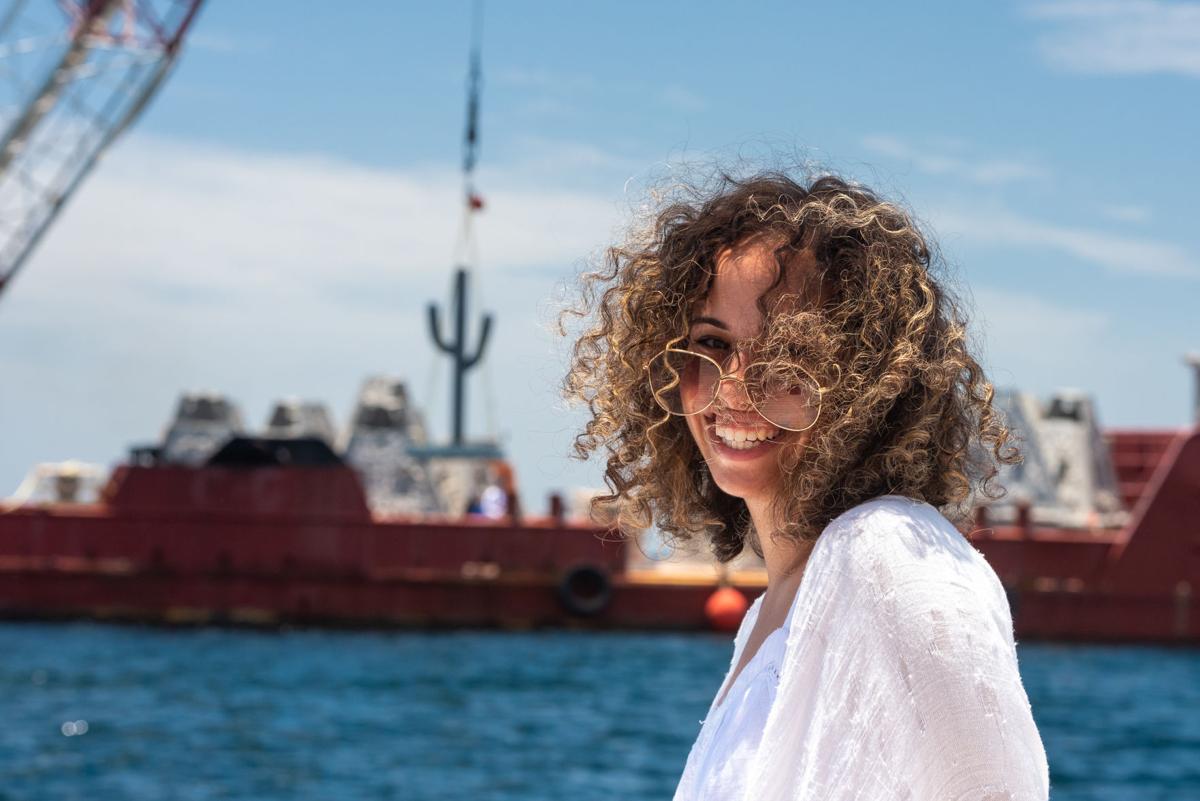 Tucson artist Ghazal Ghazi poses in front of her stainless steel saguaro sculpture as a crane lowers it onto a ship. The 10-foot-tall sculpture was placed at the bottom of the Gulf of Mexico, 60 feet below the surface, and is now part of the Underwater Museum of Art, off Grayton Beach State Park in South Walton, Florida. 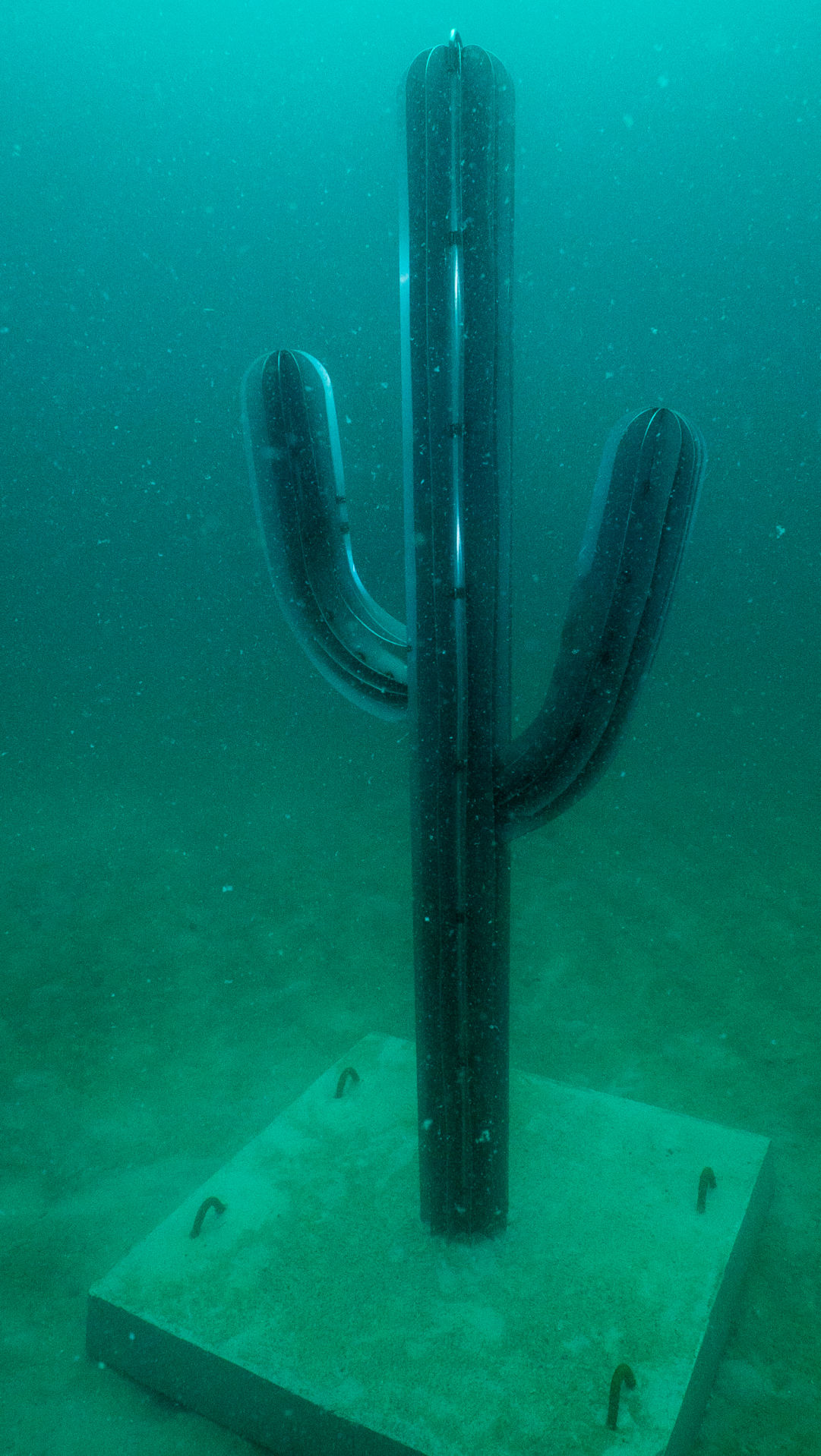 A look at the saguaro sculpture at the bottom of the Gulf of Mexico, part of the Underwater Museum of Art, located a mile of the Florida coast.

A 10-foot-tall, stainless steel saguaro cactus, born in Tucson, went to its forever home this summer, at the bottom of the Gulf of Mexico.

The sculpture is one of 12 works created by artists around the world that were installed in June at the Underwater Museum of Art, located in a one-acre patch of seabed off Grayton Beach State Park in South Walton, Florida.

The curated pieces joined seven sculptures, including one shaped like a pineapple and another like a human skull, already serving as a marine habitat for the local ocean life nearly 60 feet below the surface.

The museum is free, but requires that visitors have the proper diving equipment, certifications and can arrange for transportation to the sculpture site, nearly a mile off the coast.

Tucson artist Ghazal Ghazi, co-creator of the saguaro sculpture, thought an underwater museum sounded surreal when she responded to the museum’s call to artists, and was subsequently chosen to participate, earlier this year.

“It seemed very beautiful, very magical,” said Ghazi, who moved to Tucson from the Midwest in 2008 to attend the University of Arizona.

Ghazi tapped fellow Tucson artists Bill Baron and Michael Ramirez to work with her on the project.

The group explored several designs, but the iconic saguaro “really stood out to us,” Ghazi said.

“Sea life will be growing on these sculptures,” Ghazi said. “We thought about how saguaros are so vital to maintaining and promoting life in the desert. The sculpture would be accomplishing the same role underwater.”

The colossal cactus was constructed in a workshop near downtown Tucson and took nearly a month to finish. It weighed close to 300 pounds upon completion.

It was shipped to Florida via flatbed truck in late March, where it was fixed onto a concrete pad, meant to prevent it from sinking into the sand, and to ensure proper balance on the sea floor, according to Jennifer Steele, executive director of the Cultural Arts Alliance of Walton County.

The museum, a collaboration between the arts alliance and the South Walton Artificial Reef Association, opened in June of 2018 and bills itself as the nation’s first underwater art museum.

That same year, Time included it in its annual list of world’s greatest places. The list highlighted 100 global destinations based on several factors, including originality, innovation, influence and sustainability.

The sculptures, now officially part of the Florida Department of Environmental Protection’s artificial reef project and the arts alliance’s Art in Public Spaces program, will remain there indefinitely, even as more sculptures are added, Steele said.

Steele added that they hope to install about 50 sculptures total before the allotted space reaches capacity.

The museum launched in an area of Florida already known for its tourism. Walton County, Florida, receives more than 4 million visitors to its white sand beaches annually, and some of those visitors in the last year have included a trip to see the sculptures.

“The destination is becoming increasingly popular with divers as they learn about the site,” Steele said. “As a result, more dive resources are becoming available due to the demand.”

Ghazi, who attended the saguaro sculpture’s deployment, saw the whole experience as a “unique opportunity.”

“It is wonderful to be able to create, and, at the same time, make something that will help marine life,” she said.

Artist colleague Bill Baron said it is a weird feeling making a piece of public art for an exhibition that he will probably never see himself, but there are advantages to its location.

“It is cool because it will be untampered with,” Baron said. “It is like a weird little sunken treasure.”

Note: This story was originally published by the Arizona Daily Star on Aug. 9, 2019

Tucson has a treasure trove of opportunities for extracurricular education, whether you want to expose your kids to other cultures or teach them about the world.

It's officially time to go to Mount Lemmon

45 amazing Tucson murals and where to find them

It seems like almost every Tucson wall tells a story.

Help the Historic Fourth Avenue Coalition paint the town this weekend at Paintstock.

Renée Cloutier, Gaslight Theatre’s head costume designer, has been working with the company full-time since 2001