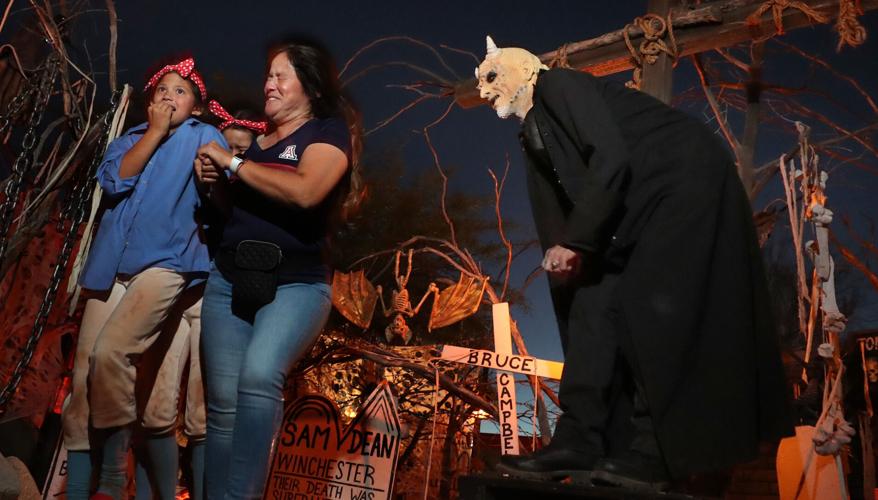 A pair of hikers get surprised by a "demon" coming to life on the Terror Trail at Tomb Town in 2021. 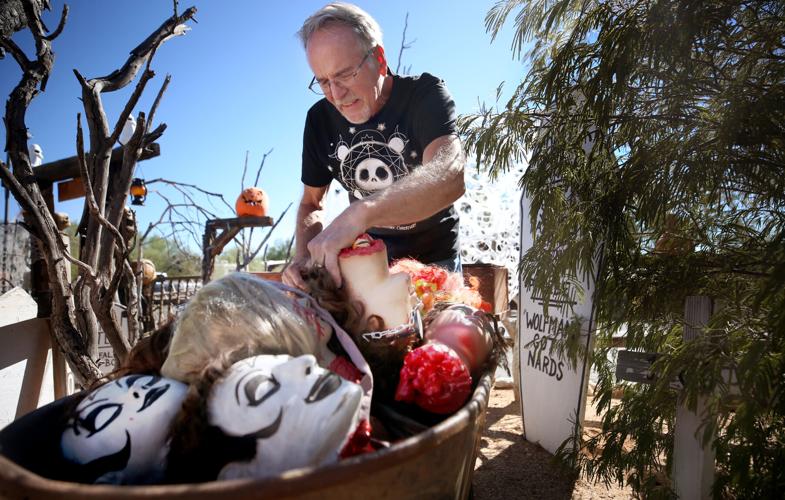 Keith Stewart sorts through his wheelbarrow of severed heads, looking for the right one to hang in the right place while working on his front yard haunted Halloween walk, Tomb Town. Stewart and his wife Jenny, have been running their neighborhood walk for 22 years, with proceeds going to the Community Food Bank. 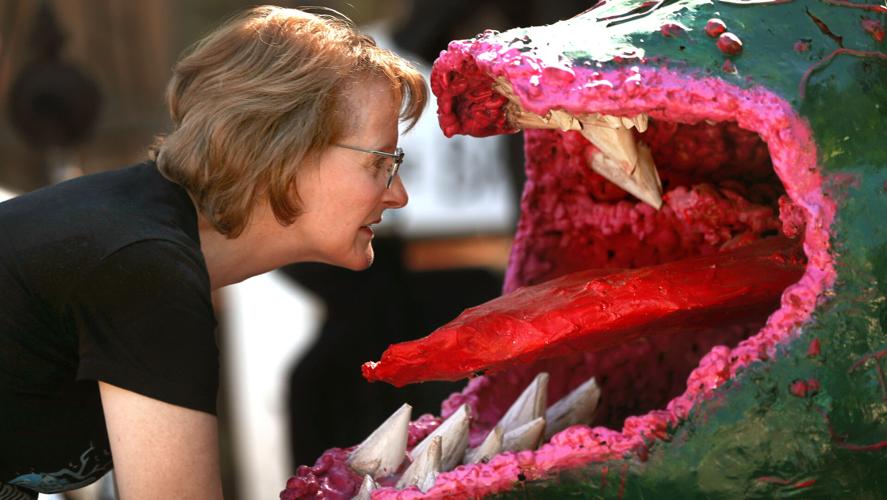 Jenny Stewart peers into the mouth of Audrey, the carnivorous plant from Little Shop of Horrors, looking for damage and what needs touching up while working to set up the family's annual Tomb Town. The Halloween walk is open two nights a year, Oct. 30-31, with the gate admission going to the Community Food Bank. 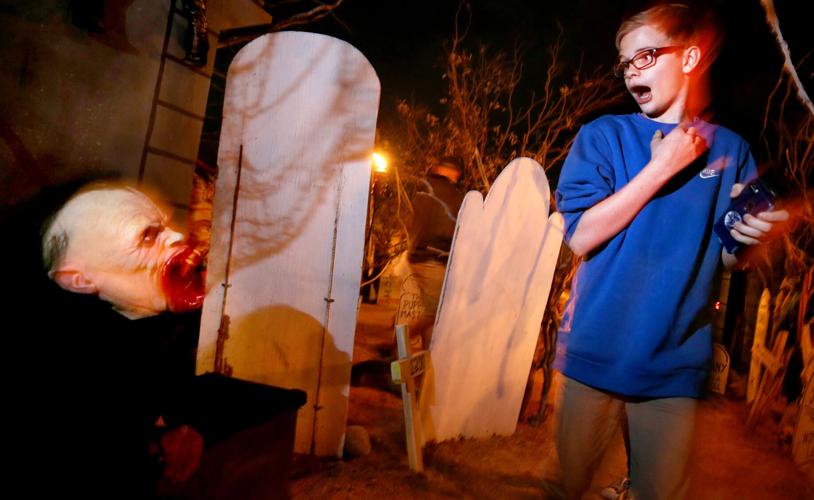 Jude Nicolai reacts to a "demon" popping up from a casket as he makes his way through Keith and Jenny Stewart's Tomb Town in 2017. 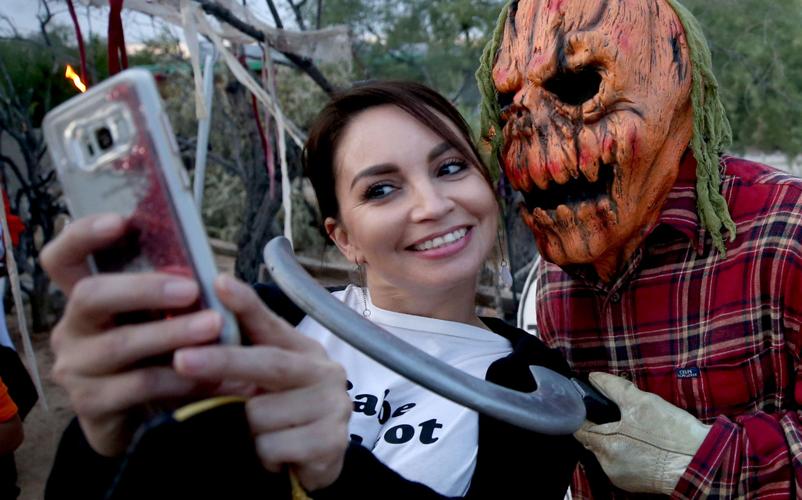 The Pumpkin Head isn't too scary for Veronica Villegas who grabs a selfie while taking the haunted walk for Keith and Jenny Stewart's Tomb Town, Tuesday, October 31, 2017, Tucson, Ariz. 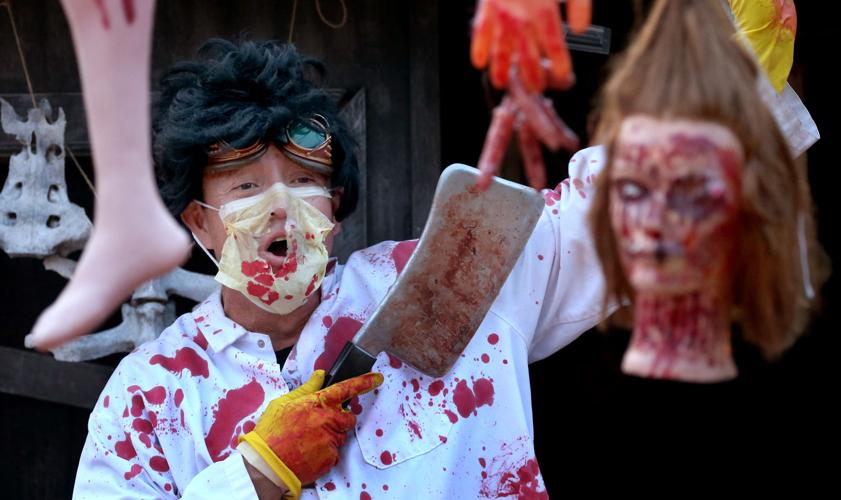 Keith and Jenny Stewart are lucky there’s no homeowners association in their northwest side neighborhood, because their front yard is a total horror show.

They have dead trees everywhere and a giant bug problem, and right next to the front door there’s a wheelbarrow full of severed heads.

It’s the Wednesday before Halloween, and the Stewarts are busy putting the final touches on their spooky, sprawling, locally famous attraction known as Tomb Town.

“We’ve still got to hang all the heads, and all the skeletons that are on the porch have got to go out,” Jenny says.

They also have about 30 life-size dummies waiting to be positioned along the Terror Trail that twists through the yard.

This marks the 22nd year for the two-night event at their house on North Wanda Road, near North La Cañada Drive and West Magee Road.

“So far, we haven’t had any complaints from the neighbors,” Jenny says. “Nobody has called 911 because of the screams.”

The couple has been decorating their yard for Halloween since the late 1980s, when they lived on a cul-de-sac in San Pedro, California.

Their displays back then were tiny by comparison — only about a dozen dummies dressed as classic monsters and modern horror characters.

A move to Tucson in 2000 gave them the space they needed to expand.

Now their collection of Halloween decorations numbers well into the hundreds — way too many to count, Keith says.

They’ve reached the point where they can’t add anything new without getting rid of something old. They simply don’t have room for any more stuff. “I’ve built eight or nine coffins myself, and they get packed to the max when everything goes back into the garage” for storage, Keith says.

One of their caskets is the real deal. They got it for free a few years back from a Southern Arizona law enforcement agency that seized it from smugglers who had packed it full of marijuana. The Stewarts call it their “pot coffin.”

Some of Tomb Town’s decorations were purchased. Most were modified or built from scratch, using items scavenged from yard sales, construction sites and the occasional “dumpster dive,” Keith says with a laugh.

The Stewarts' creations include a giant ant and a massive tarantula made out of rebar, chicken wire, steel wool and paper mache reinforced with rubberized roof coating. They’ve also made their own full-size versions of Audrey, the murderous plant from “Little Shop of Horrors,” and one of those nasty sand worms from “Tremors.”

The mausoleum, haunted shack and other small structures people walk through on the Terror Trail were all assembled from recycled wood. “Most of the newer buildings are interior doors from homes that have been remodeled” in the neighborhood, Keith says.

A few items have been with them from the beginning, including a dummy that had one foot knocked off by a street sweeper back in California but still gamely shows up every Halloween to dangle from a noose.

Keith tinkers with various props throughout the year, but the real work comes in late summer or early fall.

The first step is to sketch out a map of the layout, which changes every year. The actual set-up usually begins with Keith transplanting about 30 dead trees from the backyard to the front. “It's good exercise,” he says.

After Halloween is over, it generally takes until the end of November to pack everything up and put it all away again.

They have one whole shed dedicated to Tomb Town stuff. The rest ends up in the backyard, a few closets inside the house or stacked in the garage in such a way that they can still park in there. The giant ant and tarantula come apart and spend the off season hanging from the ceiling above their car.

The Stewarts try their best to keep things moving, but at times the line to get in can stretch out of their driveway and down the street more than the length of a football field.

Their neighbors have always been very understanding. Some have even helped out as volunteers over the years.

“Most everybody appreciates the fact this is a good place and a safe place for kids to come, as well as adults,” Keith says. “And we don’t go beyond 10 o’clock, so it’s no worse than anybody having a party.”

The Stewarts’ first Halloween display in Tucson only drew about 50 people, mostly by word of mouth.

After that, they began to promote themselves more widely, turning it into a charitable event benefiting the Community Food Bank of Southern Arizona.

Jenny says they used to collect canned goods, but they switched to cash donations after they ended up with a literal ton and a half of food one year, which proved to be a real hassle for both them and the food bank.

They decorate their driveway in a little-kid friendly way and save the really frightening stuff for Terror Trail, which winds down the side of the house and snakes through the front yard, past about 100 wooden crosses and tombstones handpainted with jokes and the names of popular horror characters.

Keith says a walk through the attraction takes “a good 20 minutes” and includes numerous “jump-scares” delivered by as many as a dozen costumed actors, the Stewarts included.

The drama club at nearby Canyon Del Oro High School has been a good source of talent in the past. These days, though, their crew of volunteers includes a mix of new recruits and regulars who have been helping out for years, Jenny says.

No one gets paid, including the Stewarts. All the donations they receive go directly to charity. Jenny estimates Tomb Town has contributed more than $30,000 to the Food Bank of South Arizona since the early 2000s.

So what have the Stewarts learned after more than two decades of haunting?

Keith thinks for a minute then says: “Don't scare somebody so much that they poop themselves.”

And before you ask: Yes, this really happened.

“The mother was saying, ‘My daughter needs to go home and change her pants, but she wants to come back. Will you charge us to go through again?’” Jenny says with a laugh. “I’m like, ‘No, that’s OK. You earned it.’”

'Everybody likes a little jump-scare'

Keith has been drawn to scary stuff for as long as he can remember. “I've been a fan of monster movies since I was probably 4, 5 or 6,” he says.

His early favorites included the original “Dark Shadows” series and all the classics starring Dracula, Frankenstein, the Wolf Man and the Creature from the Black Lagoon.

“When we first started dating, I was like 18, and I didn't like horror movies. I was totally creeped out by them,” she says. “So he got me into the horror genre and stuff.”

Before long, he was taking her to Fangoria’s Weekend of Horrors and other conventions, where she developed an appreciation for the artistry that goes into scary movies.

Now she’s a devoted hobbyist, just like her husband of 40 years. She trades tips online with other “haunters,” and teaches herself new methods of “corpsing,” which is scary-person lingo for making off-the-shelf Halloween decorations look more authentically dead.

She even enjoys the scary parts now, especially when someone else is on the receiving end.

“I think everybody likes a little jump-scare. It gets your adrenaline going,” Jenny says. “It's fun. Some people laugh, some people cuss.”

Keith’s favorite part: “Making the guys scream like women,” he says. “You’ve got these guys pushing their girlfriends or wives along, thinking they'll take the scare, and I will scare them even better than their wives.”

They have no plans to stop, either.

Keith is set to retire next year from his job as part of the night crew at a Safeway grocery store, so he’ll have even more time to devote to his frightening hobby. He wants to keep it going at least until he turns 70 in another five years.

“Then we'll see what happens,” Keith says. “If we decide to quit (some day), we will advertise big time that we're going to have a huge yard sale, and all the other haunters will be here to pounce.”

For entry to the Halloween attraction, organizers request a $1 donation to the Southern Arizona Community Food Bank.

Younger children and the faint of heart are advised to come before dark.

This family transforms their garage into a haunted house on Halloween 👻

Last year, some 300 people waited in line to walk through the haunted house the Golembiewski family puts together for Halloween on Tucson's east side.