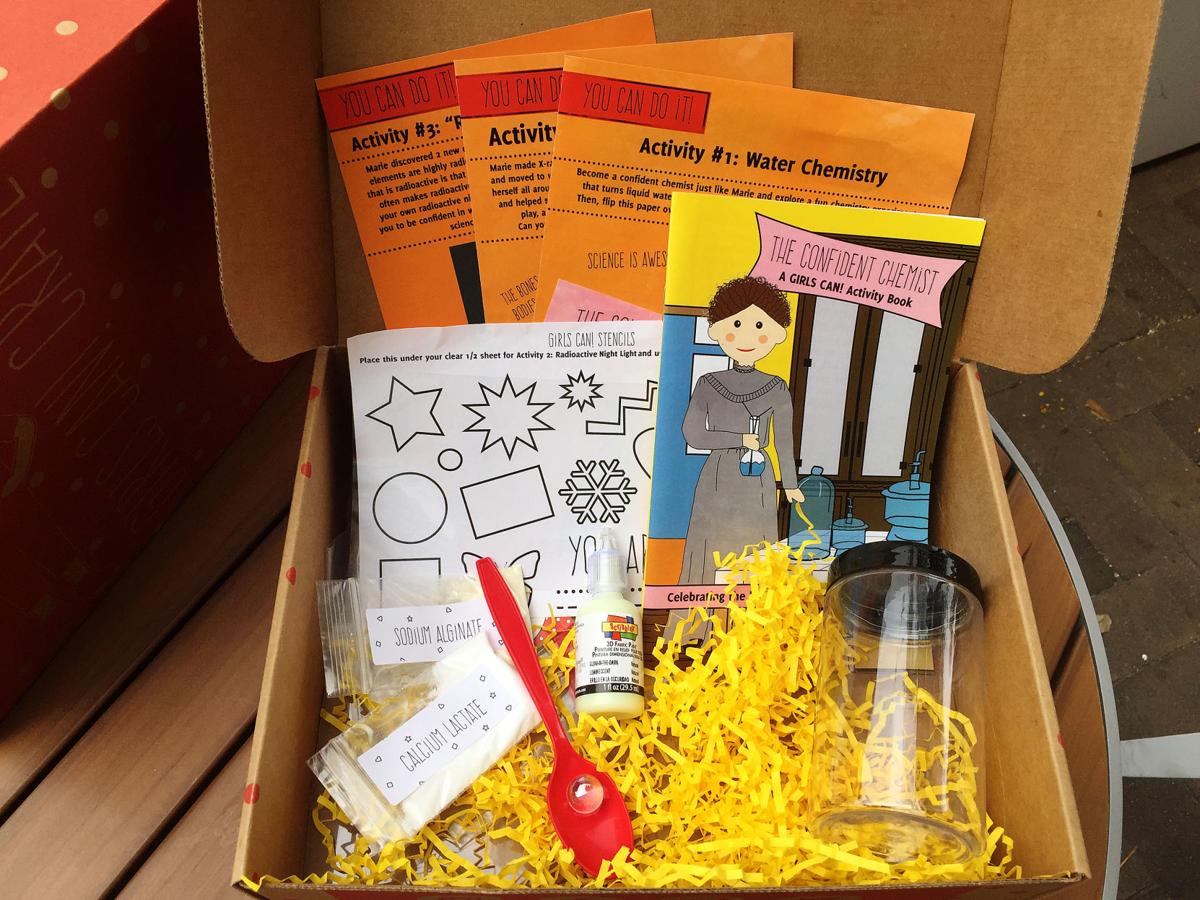 Each box comes with information about a historical woman, activity book and supplies needed to do activities based on the woman's achievements. 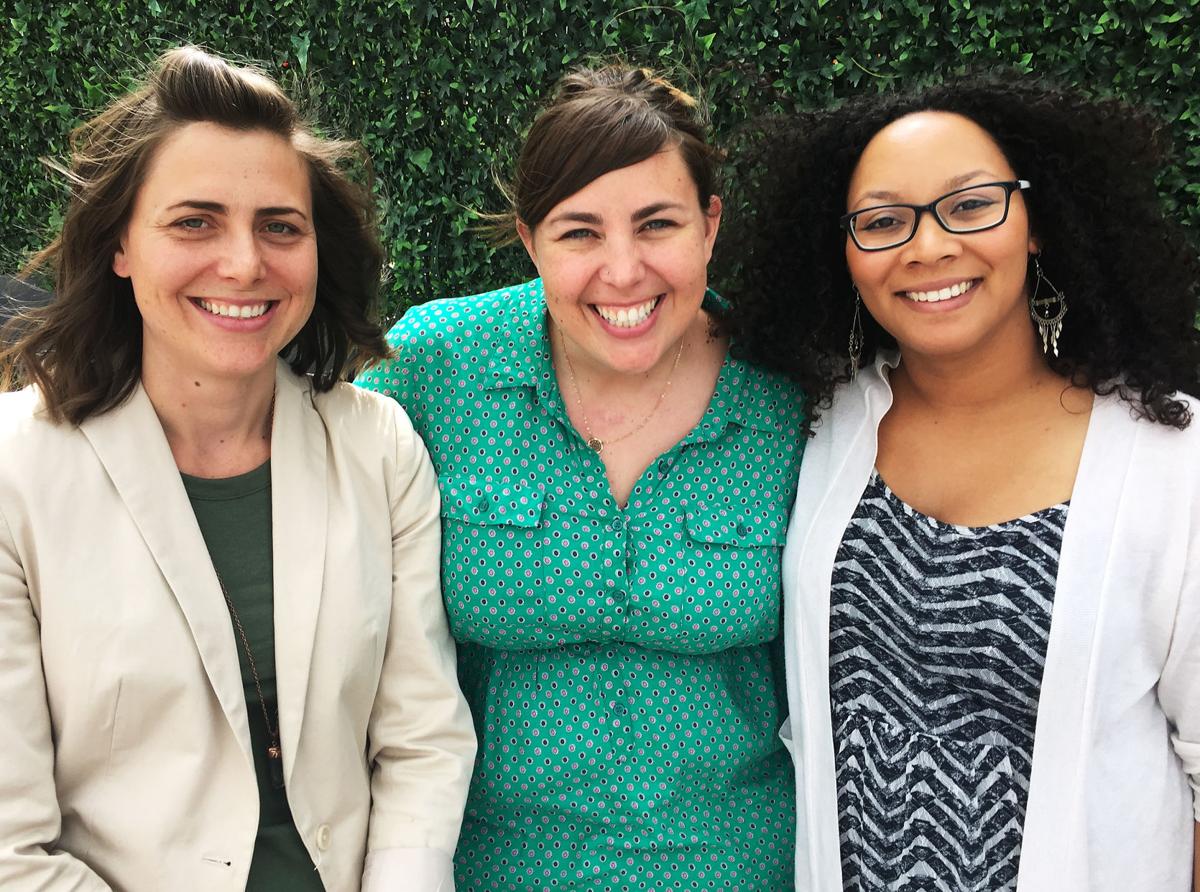 Megan Goodman, 32, Kristen Snyder, 40 and Alison Shores, 30 make up the Girls Can! Crate team. Their goal is to empower girls by introducing them to women in history.

That's what the local women behind Girls Can! Crate, a monthly subscription box that introduces girls to awesome historical women, believe.

Each crate comes with a booklet about an historical woman and activities based on her accomplishments. For example, if this month's lady was a scientist, the crate would include all of the supplies needed to do a couple experiments.

The business was founded by three Tucson women — Kristen Snyder, Alison Shores and Megan Goodman — who want to empower girls and inspire them to go for their goals, despite obstacles they may face.

"One of the things is that most of the women we feature in our boxes have overcome huge obstacles," Shores said. "I think that's a big piece of our boxes, is showing girls that even if it looks like there's no way, it's still possible."

As a young girl, Goodman says she remembers doing reports on scientists or artists and they'd all be men.

"That changes your perception," Goodman said. "So we want to elevate the stories of women."

Girls Can! believes that if little girls see women who look like them, think like them and are passionate about the same things as they are, they'll see they can be whatever they want and have the confidence to pursue their dreams.

Do you know these ladies?

Have you heard of Nellie Bly? She was an American journalist who had herself checked into a New York City asylum to expose the conditions of patients there in 1887. She also took a solo trip around the world in 1889 — by donkey, steamboat, train, you name it. Women didn't do things like that back then.

Or, how about Patsy Mink? She was the first woman of color and the first Asian American woman elected to Congress. Her mission was to change laws that denied women entry into medical colleges after she was denied by 20 of them. So, she became a lawyer instead, wrote Title IX of the Higher Education Act, which prohibited gender discrimination in all federally funded educational institutions.

Nancy Roman? She's an American astronomer who was one of the first women executives at NASA. Many know her as the "Mother of the Hubble" for her efforts in planning the Hubble Space Telescope.

But subscribers of Girls Can! Crate have heard of these amazing women, since they've been featured by the business.

It is intentional that the women featured in the crates are racially diverse, Shores said. And, not just women from the United States, though many of them are.

"We want to make sure we have women from all over the world because women all over are pretty amazing," Goodman said.

Customers have the option to purchase one box, or sign up for a monthly subscription. Prices range from $25.95 per crate to $29.95, depending on the plan you choose.

Ten percent of the proceeds are donated to a non-profit organization that benefits girls — GEMS, Days for Girls or SheHeroes.  Customers get to choose which of the three organizations, their dollars will go to.

Each box is put together by the three business owners, from start to finish.

They decide who to feature, do the research, write the books, create and test activities, design and illustrate activity guides, have them printed and package them up.

Eventually, the trio hopes to grow enough to employ other women, but for now it's just the three of them and an occasional intern.

Girls Can! Crate has subscribers all over North America from Arizona to Florida to Canada.

"We've had numerous moms write that they'd never heard about these women," Snyder said. "For that reason alone it excites me every month. We just wanted to do something with meaning and this has meaning."

This Badass Woman of Tucson builds houses, cars and community

This story was originally published on Oct. 2, 2016

Walking into Marigold Tattoo and ART Studio is like walking into a cleaner, more private version of your artsy friend's living room.

31 things to do this May

And the count down to the last day of school starts now.

5 places to take the kids for swim lessons

Even if you don't have your own pool, chances are you'll be around one at some point during the summer.

The Children's Museum Tucson is launching a brand new arts program that starts May 13 and will continue on the second Saturday of every month.

Tucson-area schools: Be careful about letting your kids watch '13 Reasons Why'

Schools across the country, including at least two in the Tucson area, are urging parents to exercise caution if they allow their children to …

Going to the carnival can help more kids get books

Take the kids to a carnival that benefits a Tucson non-profit.