Floor guard Nick Hayes dances to the music as he monitors the skaters and keeps the traffic flowing at Skate Country, 7980 E. 22nd St. 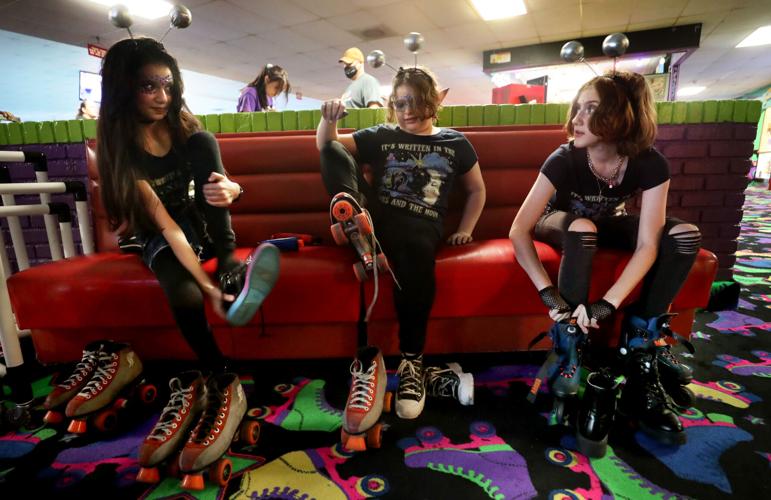 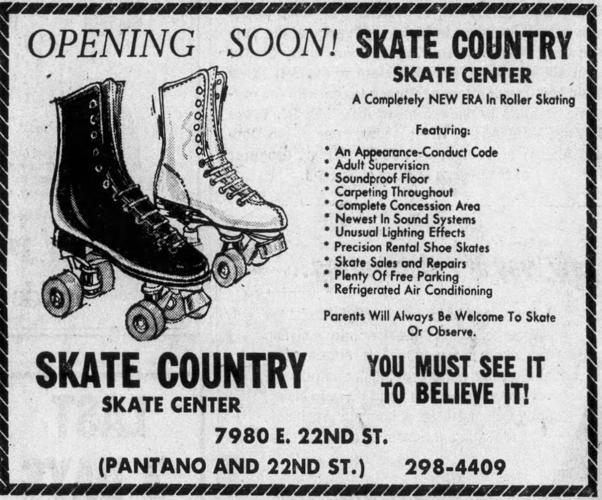 A 1972 newspaper announcing the opening of Skate Country in Tucson. 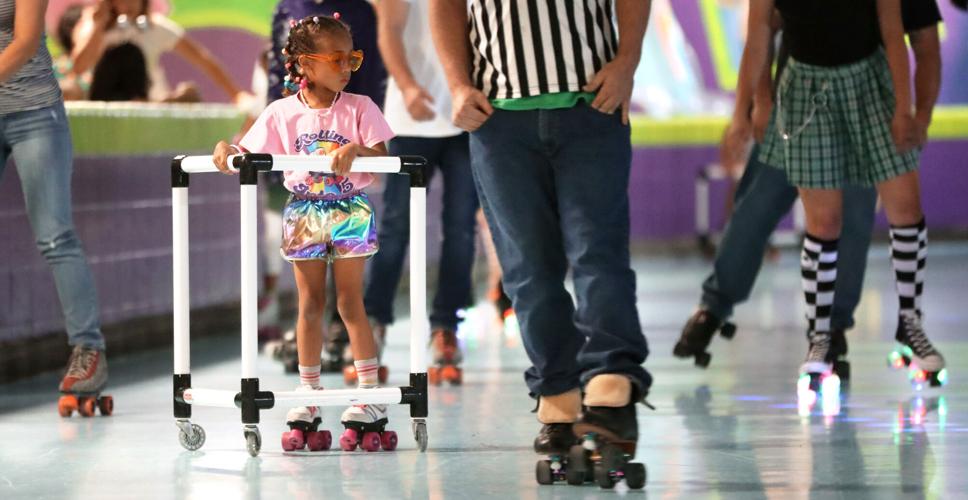 Five-year-old Cleo Knipe is dressed for her day out on the floor at Skate Country, 7980 E. 22nd St. 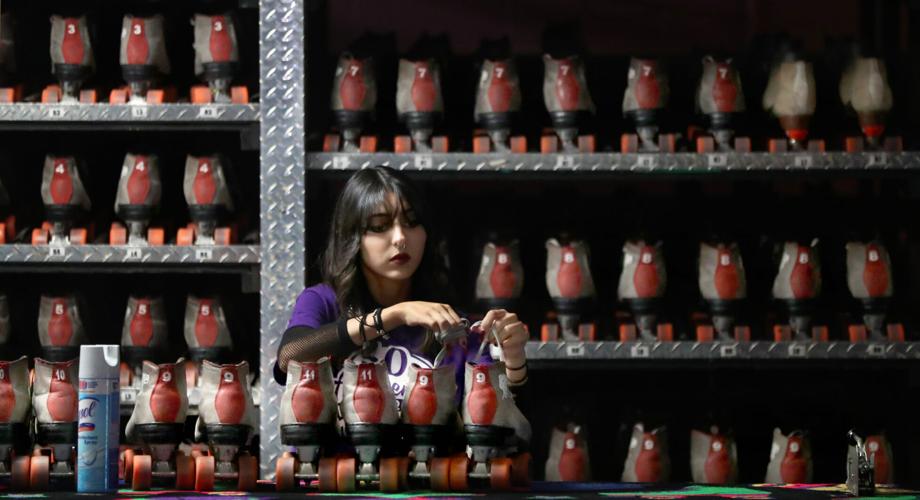 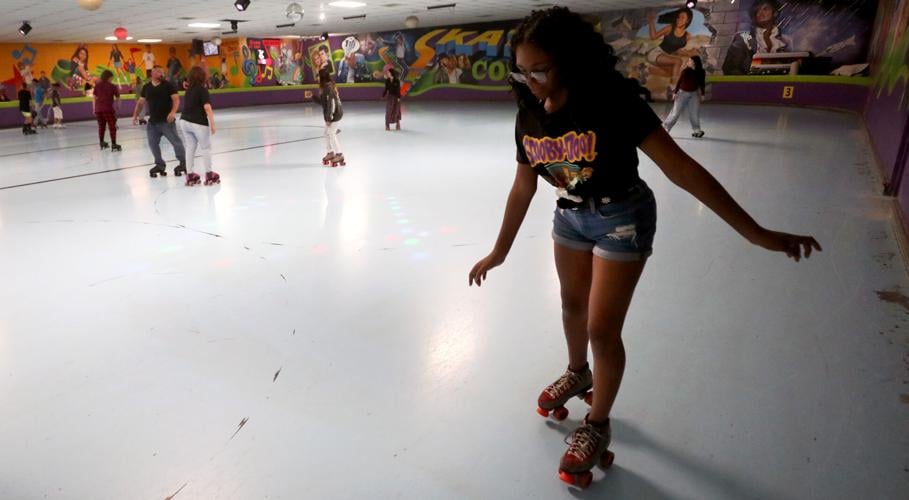 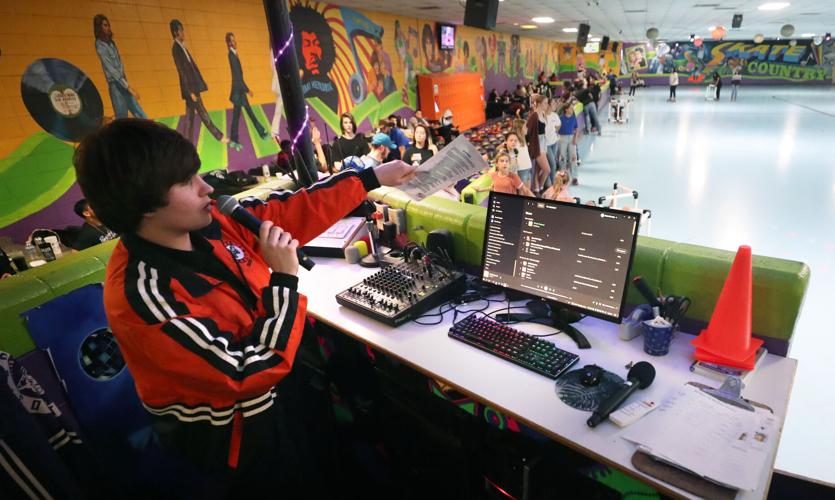 DJ Alec Johnson reads the rules to the crowd lined up and waiting to get out on the floor during an afternoon session at Skate Country, 7980 E. 22nd St. 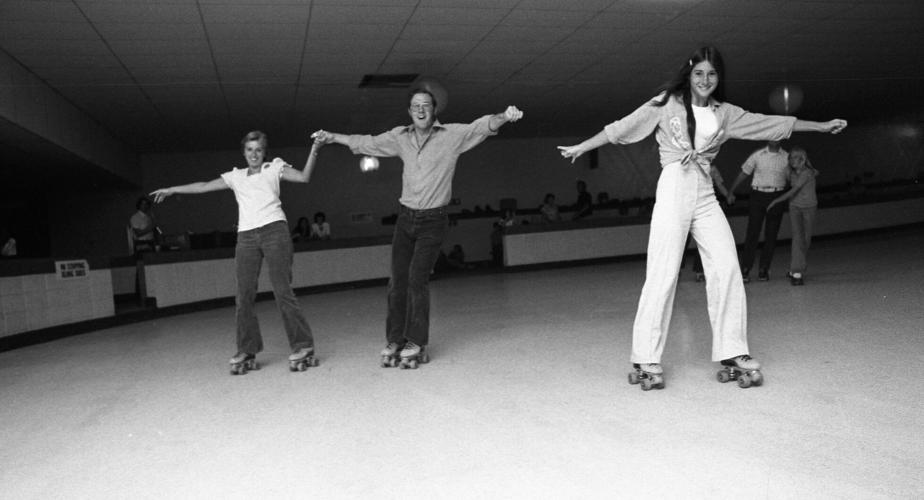 Acting up for the camera at Skate Country North, Tucson, in 1975. 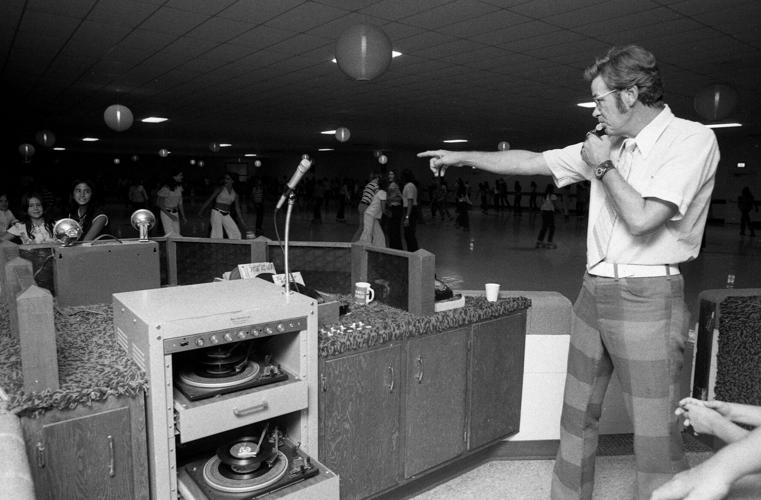 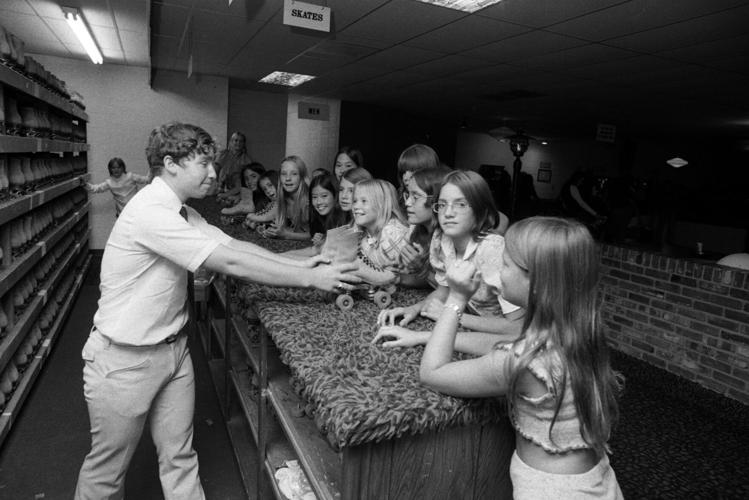 It was the early ‘90s when Marlene Leer, just a teen at the time, was sitting in Skate Country on a day the rink was temporarily closed for some contracting work.

“Future owner Marlene Leer,” she wrote in the dust on one of the tables.

Leer was a regular at the east-side roller rink for years before she started working there at age 14.

This year, Skate Country turns 50 years old. Through the last half century, the business has braved recessions, a pandemic and decades of changes. But more than that, the rink has strengthened families, built friendships and created countless memories for generations of Tucsonans.

It all started in Iowa.

The success of the three centers in Iowa led the founders to open their fourth location, this one in 1972 in Tucson — the same rink that still sits at 7980 E. 22nd St. today.

“I joined Skate Country as a part-time employee while I was paying for school, going to the U of A in 1973,” Snellstrom says. “And then in 1976, they decided to open two facilities in New Orleans and asked me to go run one as a general manager.”

Though his parents weren’t happy about it, Snellstrom left Tucson for Louisiana. Skate Country would eventually open a center in Florida, and then a second Tucson location in the ‘80s — first on Oracle Road, which then moved to Stone Avenue and closed in the early 2000s.

Eventually, though, the owners were ready to retire.

“They asked me if I wanted to purchase the 22nd Street location because they were getting older and they knew they would have to sell their facilities so they tried to sell them to people who had been working there for many years so they’d have the opportunity to buy them,” Snellstrom says.

Snellstrom purchased the business in the early ‘90s — which is also around the time when Leer became a part-time employee, working alongside Snellstrom for two decades.

“When I decided to retire, I knew she was capable and offered the business to her,” Snellstrom says, calling the process hard-earned for Leer, who was going to nursing school at the time of the proposal.

“It was actually a dream come true. I’ve always wanted to own my own rink,” she says. “It doesn’t feel like work at all.”

A few Skate Countrys still exist in other states today, but they’re each independently owned and operated. The 22nd Street location is Tucson's sole roller rink.

When walking into Skate Country, it looks as though it did in the 2000s — in the best way possible. That dose of nostalgia you feel when skating along the neon carpets, staring at the mural-clad walls, is intentional.

“We like to keep the nostalgic feel. We have the same games — Four Corners, races, limbo, the Hokey Pokey,” Leer says. She doesn't want to change anything that will make people miss what they love about Skate Country — “so people don’t lose the memory of having a good time.”

Not everything has stayed the same, though. Over the years, they’ve gotten a new sound system, installed a new roof and new carpets, made upgrades to the bathrooms. They’ve gotten smart lockers, and painted fresh murals sporting musicians from the decades — from Elvis Presley to Justin Bieber.

“We try to improve, yet keep it nostalgic,” Leer says.

Leer attends national conventions once or twice a year, which helps her stay up to date on industry trends. One of Skate Country's biggest evolutions is reflected in what used to be the game room.

As certain games started to go out of style, Skate Country’s arcade was replaced with a skate shop. At most roller rinks, you can order skates and wait a few weeks to pick them up. But that’s not how it is at Skate Country — “We changed that to having an inventory just like a shoe store so people don’t have to wait. They can just come in and buy the skate,” Snellstrom says.

The skate shop is an addition that has been well-received by customers and industry-wide.

Despite multiple economic downfalls in the country over the last 50 years, Leer and Snellstrom both agree — Skate Country is pretty much recession-proof.

“In the recession of the early 1980s, skating did really well, and is doing well again. It’s known as a recession-proof business because it’s affordable,” Snellstrom says. Depending on the day, admission is $4-$10. Skate rental is $5.

The COVID-19 pandemic has been another beast, forcing the business to close down for months (though skating in general has actually made quite the comeback in recent years).

“That was really hard on us,” Leer says. “We survived, luckily, and now we’re doing better than ever.”

When Skate Country says they’re a family business, they mean it.

Employees who are parents are encouraged to bring their children to work, allowing them to save money on day care. And as it so happens, the kids who grow up at Skate Country often want to work there when they hit 16 years old.

“It’s a friendly vicious cycle,” Snellstrom says. Many of the people Leer worked with in the ‘90s now have kids of their own who are Skate Country employees.

“I brought my own son to work and now he’s a manager for me,” Leer says. “He grew up in the office — five days old and he’s still there at 21,” Snellstrom added.

It’s like one big skate family, Leer says. Some frequent skaters have been visiting the rink since the ‘70s — now bringing their grandkids with them.

“Over the years, I’ve seen a lot of kids that come in there — they don’t fit in at school or they don’t have a lot of friends, but then they start skating and that whole thing starts changing,” Snellstrom says. “They get friends, they gain confidence. It’s like a second home for them.”

Both Snellstrom and Leer just like seeing people happy.

“Just last Thursday, I was skating and noticed everyone was happy and dancing — and it’s so rewarding to see everyone happy,” Leer says. “I’m honored and humbled to be in this position.”

35 festivals and markets in Tucson this fall and winter 2022

Fall is here, which means many festivals, fairs and markets are making their return. Favorites include the All Souls Procession, Dusk Music Festival, Winterhaven and more in the Tucson, Oro Valley and Marana, Arizona areas.

13 local restaurants and eateries that closed their doors in 2022 😢

A list of local restaurants and eateries that closed their doors in 2022. So far this year, Tucson has lost pizzerias, a retro diner, a wing restaurant and more.

Where to find the perfect pumpkin in Tucson this fall

Fans of Hello Kitty can get themed merch and treats when the Hello Kitty Cafe Truck comes to Tucson, Arizona this weekend.

Tucson's annual All Souls Procession is back this weekend

Theatrical and dance performances, live music and elaborate visuals are planned for the annual Tucson, Arizona event that honors loved ones lost.

44 Tucson places you can have your child's next birthday party

It's time to party! 🎉🎂 From parks and artsy venues to animal-centric spots and active spaces like trampoline gyms, here's where to have kids' birthday parties in Tucson, Arizona.