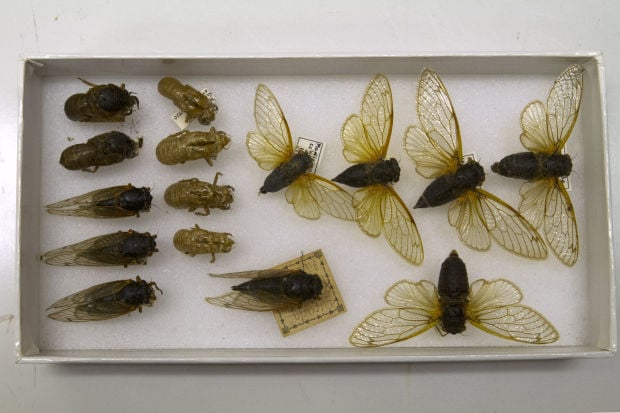 A box of preserved cicadas, including emerging insects and molted exoskeletons, in storage at the Smithsonian Institution's Museum Support Center in Camp Springs, Md. 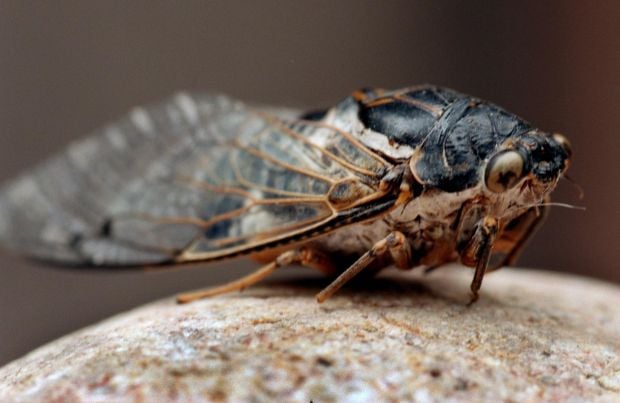 The cicada, signature summer bug that sends out the high-pitched nerve wracking buzz in the heat of the day. 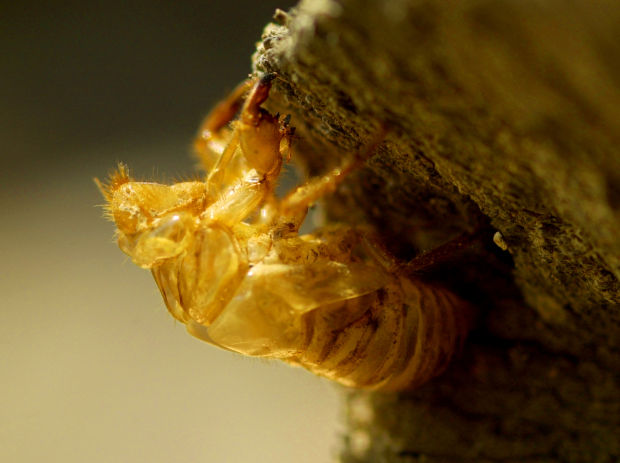 A Cicada exoskeleton hangs out on the side of a palm tree on the UA campus.

It is summer in Tucson and along with the heat comes the first high-pitched buzzzzzz. Find out more about our cicada friends.

The cicadas most common to Tucson are part of a group called Dog Days. Because (as you might have guessed) they appear during the dog days of summer. Peter Warren, the urban horticulture agent for the Pima County Cooperative Extension at the University of Arizona, says the dog day cicadas here include Apache cicadas (Diceroprocta apache) and Diceroprocta semicincta. “Cactus dodger is a common name attributed to several species, two of which are found in Arizona,” he says.

2. They bust out of the ground like a bug zombie army

Cicadas lay their eggs in tree branches, the babies make their way into the ground, stay there for about three years while they shed, feed on tree roots, get bigger and then bust out. Warren says he wouldn’t describe them as zombies since the cicadas have never been dead and they are looking for mates not brains.

The cicadas continue to shed once they emerge from the ground. People make jewelry from the fragile exoskeletons, proving the point that you can buy anything on Etsy. “Beetles are more durable,” Warren says. “I once purchased caddisfly case earrings for my special lady friend.”

Warren says many insects — such as ants, termites and palo verde beetles — emerge with environmental markers like the monsoon.

The cicadas are out a couple of weeks before the monsoon begins.

5. The buzzing is from wobbling abdomens

Warren says the male cicadas have “drum-skin like membranes inside their abdomens that they wobble with their muscles and amplify inside their bodies.” A mating call that’s better than Netflix and chill.

Cicadas are edible. Called the “shrimp of the land” it’s best to harvest them early in the morning while they are still soft and fresh after emerging from the ground. Learn how to make cicada dumplings and El Chirper Tacos in “Cicada-licious” — a recipe book available for free online (this is totally a thing that is real.) Warren says they’re “delish, a nice nutty flavor.”

7. They fill the trees

Warren guesses there are thousands in the area during a season.

Cicadas are able to stay out during the heat of the day because they have the ability to sweat.

Cicadas are a symbol of rebirth, transformation and beauty in many different cultures. Kokopelli is a cicada. Warren says, “Many insects get this reputation because of their dramatic metamorphosis. See 'Silence of the Lambs.' ”

10. Wasps are their worst enemies

If you are a cicada, you do not want to be stung by a cicada-killer wasp because it will take you hostage and lay its eggs in your body. How unfortunate.

Peter Warren is the urban horticulture agent for the Pima County Cooperative Extension at the University of Arizona. He writes the Ask the Garden Sage column for Tucson.com and the Arizona Daily Star. Send insect, plant and other questions to plwarren@cals.arizona.edu

Advice on growing cactus and answers to questions about them.

Take a look at these funny Arizona heat memes posted on the Star's Facebook page. Share yours at facebook.com/arizonadailystar

If you're wondering what the heck just crawled over your foot or flew into your hair, it's probably a summer insect trying to get more familiar.

Insects do a lot for us and our environment. They pollinate our crops, help control pest population, provide nutrition for birds and fish and more.