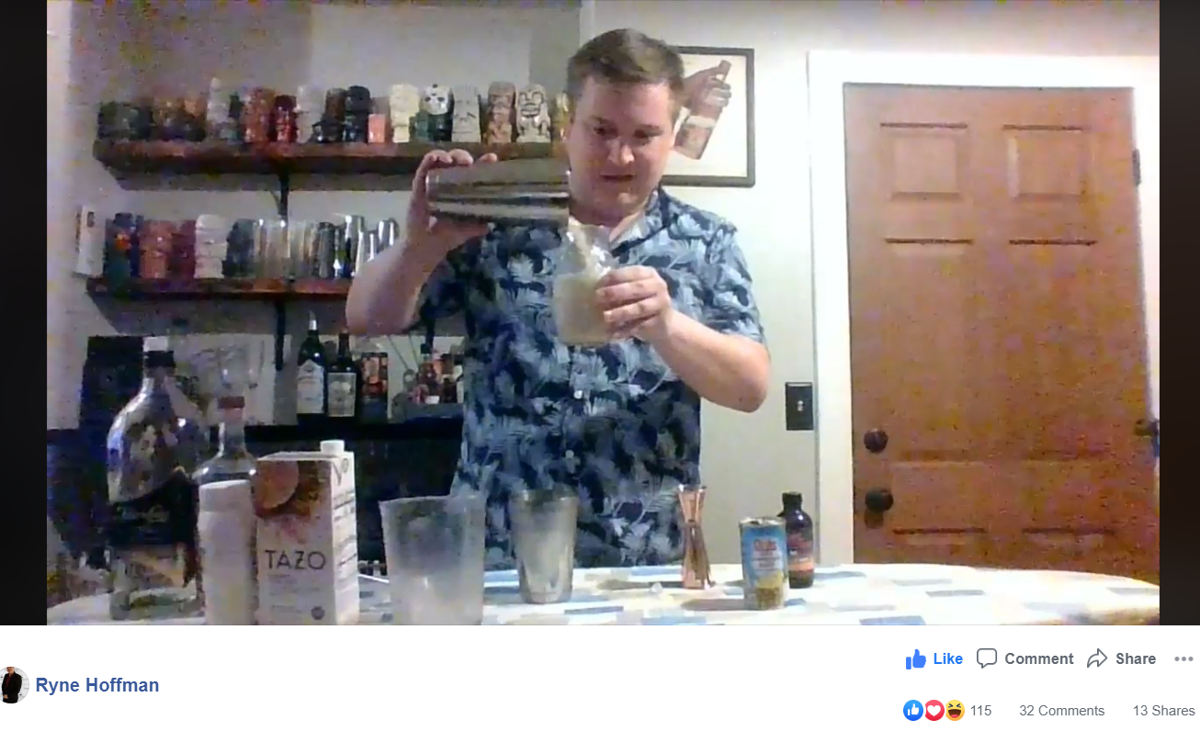 Ryne Hoffman's QuarenTIKI video has about 700 views on Facebook. 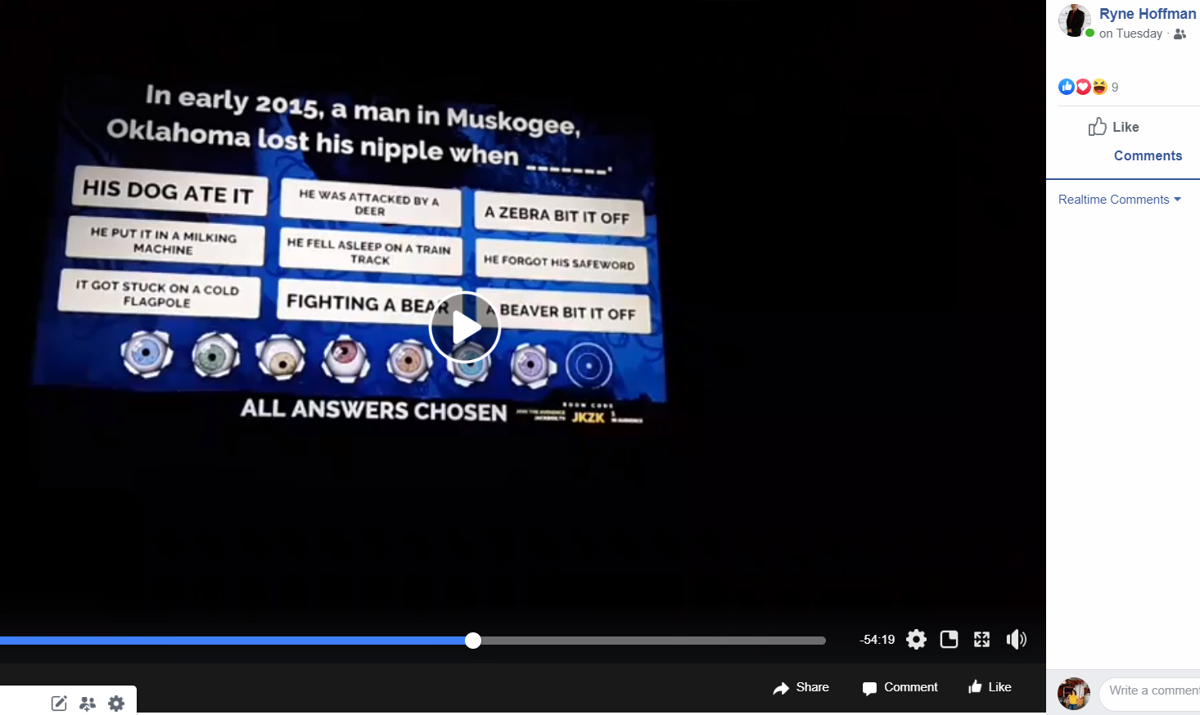 Local bartenders participated in a Facebook Live showing where they could play Internet trivia games like Jackbox. 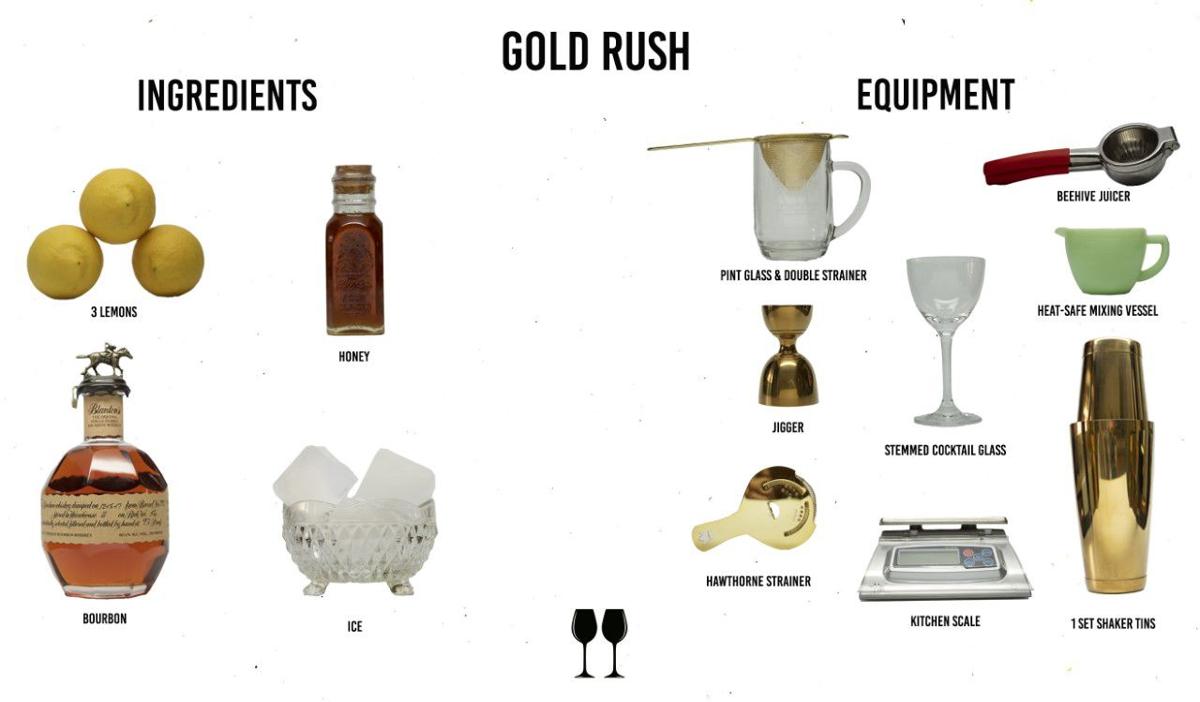 Ampersand & Ampersand sends these informational graphic cards out to their participants before the cocktail class starts. 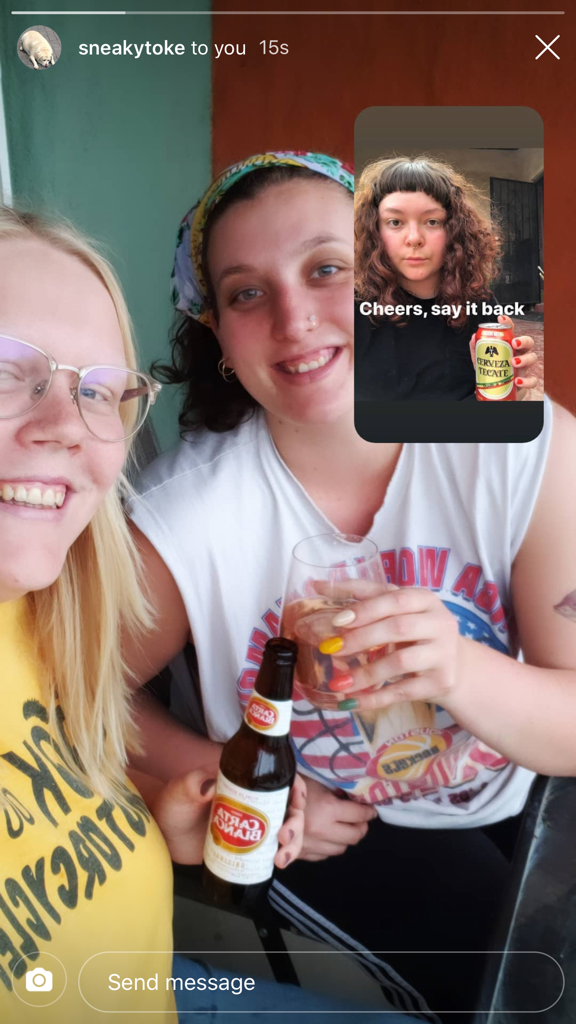 Aside from using an ironing board as bar top, Ryne Hoffman's setup looked pretty legit. There were tiki mugs and bottles of liquor on the shelves, and Ryne himself was wearing a Hawaiian shirt.

"Hello survivors! Welcome to the very first of hopefully very few QuarenTIKI cocktail videos," he announced on his Facebook page. "My name is Ryne Hoffman, this is my house. So let's make some drinks!"

The bartender then proceeded to whip up a tiki drink he called the COVID-colada, using pantry ingredients like canned pineapple juice, cream of coconut and a box of Tazo chai latte that he found in his fridge. "I recommend drinking this delicious cocktail poolside, or if you're afraid to go outside you can turn on the bathtub and listen to the sounds of that, pretend that it's a pool or a waterfall," he said.

One of Tucson's most respected mixologists, Ryne had just started a new job as the bar manager of the moody-chic Portal cocktail lounge in the back room of Ermanos Craft Beer & Wine Bar. But he was laid off just a couple weeks later on St. Patrick's Day, when Ermanos closed its doors in response to the coronavirus crisis.

An entertainer by nature, Ryne said he decided to put out a new QuarenTIKI video every Tuesday to give himself something fun to do since his life was lacking structure. On Mondays, he's also started a Facebook Live group where he streams Internet party games like the Jackbox trivia series. More than 40 people tuned in this week to enjoy some drinks in their respective houses and answer questions on the screen through their phones.

Ryne has put a link to his Venmo @Ryne-Hoffman in case folks want to donate, and a few people have taken him up on it. But other local bartenders have figured out how to charge people directly for virtual happy hour sessions using the video conferencing tool Zoom. Service industry veterans Dale and Stephen Ott run their own consulting business called Ampersand & Ampersand. To promote it, they're holding private mixology classes for groups like the Thrasher PLLC law firm, which arranged a session with them this Friday.

"We're giving everybody an education, a lesson, on two cocktails that we can help them choose," Dale said. "Going into detail on things like making a three-to-one honey syrup for a Gold Rush, and allowing them to all do it all together. It's not just a Rachel Ray cocktail show, it's getting people out of their headspace."

The virtual classes have a maximum of 10 members and cost between $75 to $120 an hour, including the prep time needed to put everything together. The couple also sends out graphic cards ahead of time to the participants, which lay out the tools and ingredients they'll need. (You can set one up by emailing info@ampersandyampersand.com or calling 520-709-1850.)

Dale said that so far, the classes have been a success, and have helped boost their income during an uncertain time for their industry. She also thinks the idea has taken root, and that she'll probably use it even after the coronavirus crisis is over.

"It's providing a big morale boost for families," she said. "We have two family birthdays that we're doing on Saturday, where the people are in three different countries: Colombia, the U.S. and (a country in) Europe. ... Figuring out how to bring us together when we have to be apart, it's gonna help us survive this thing mentally."

Even bars like El Crisol are getting to the virtual classes idea. The mezcal bar in the back of Exo Coffee is continuing its weekly Thursday evening agave education classes through Zoom. Interested parties can sign up by providing their email address on the bar's website, and then head in that day to pick up their mezcal tasting kit, which includes oranges and Oaxacan worm salt.

I miss the community generated by our mezcal tastings. SO WE'RE GOING TO DO THEM DIGITALLY, BEGINNING THIS THURSDAY! Sign up on Exo's website (scroll to the bottom of the home page), which will give us your email, and we'll send you a Zoom link. We'll assemble tasting kits, including oranges and sal de gusano, which you may pick up at Exo Thursday between 7 am and 4 pm. Tasting at 7! #mezcalistas #mezcaleducation #mezcaltucson #mezcalamericas #mezcalbartucson #mezcalería #tucsonbarscene #tucsonnightlife #mezcalversuscorona #mezcalparatodomal#agaveistheanswer #agaveinternation #agavelife #agavespirits

But not everyone is putting that much effort into it. Local Tallboys bartender Emili Krzyzanowski came up with a spur-of-the-moment drinking game while she was having a Tecate on her porch one evening last week. Inspired by Instagram call-outs where people would encourage each other to say "good morning" to each other, she decided to do the nighttime equivalent.

She posted a picture of herself and her beer with words, "Cheers, say it back." That evening, she received 25 responses from friends who were drinking everything from Borderlands IPA to Coors to even water. (Okay, so the Borderlands IPA was actually me. Emili is my friend, and when I saw it on her Instagram story I decided to send back a picture of me drinking beer with my lion-shaped pillow that I named Shnookums. So yeah, you know what's gong on in my life right now.)

After we sent our pictures over, Emili posted all of our responses onto her stories wall for everyone to see. Her idea set off multiple threads of friends drinking alone, together.

"I was seeing it in my friends' stories too, that their friends had responded with their cheers ... and these were people that I hadn't even met before in my life," she said. "It's this domino effect of human connection in this silly way, through an Instagram story."

This is the first part in a series that chronicles local restaurants.

19 iconic Tucson dishes and recipes to cook at home