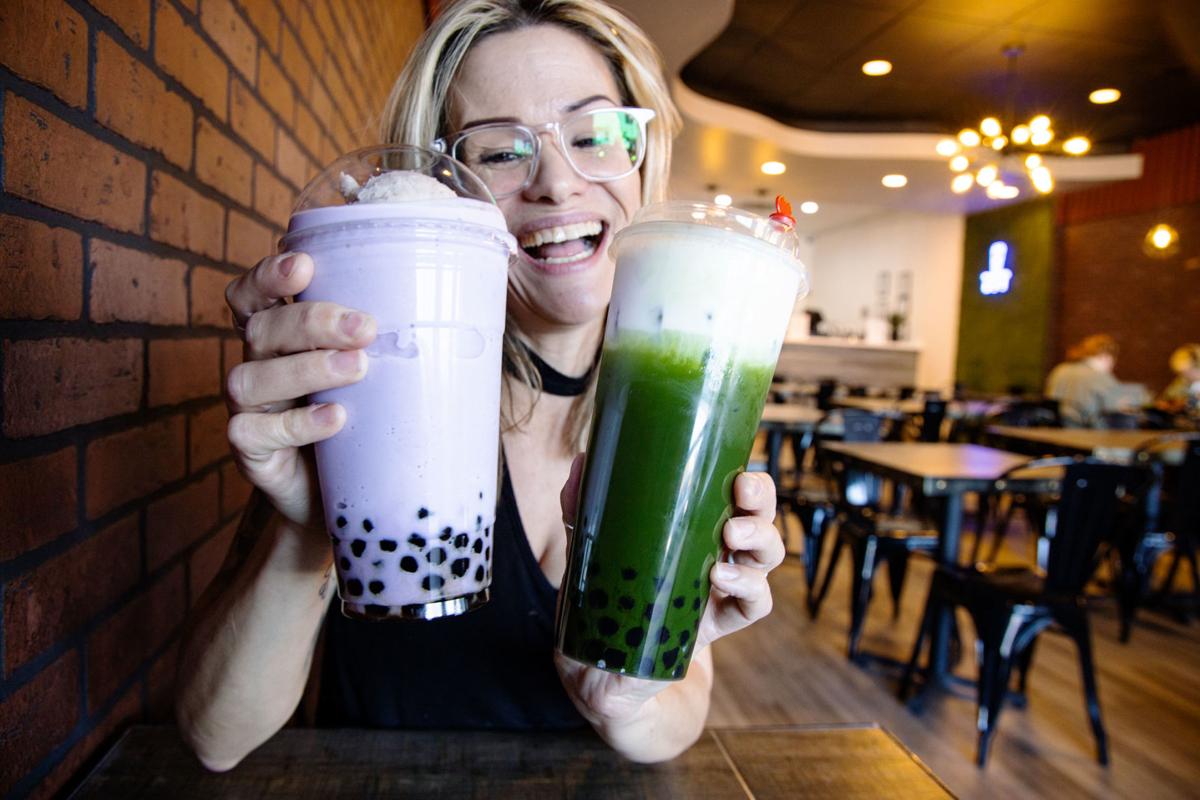 Jen and I had so much fun during this week's visit to Ni Hao Tea, where we sipped on a fresh taro smoothie and a cheese tea with matcha powder. 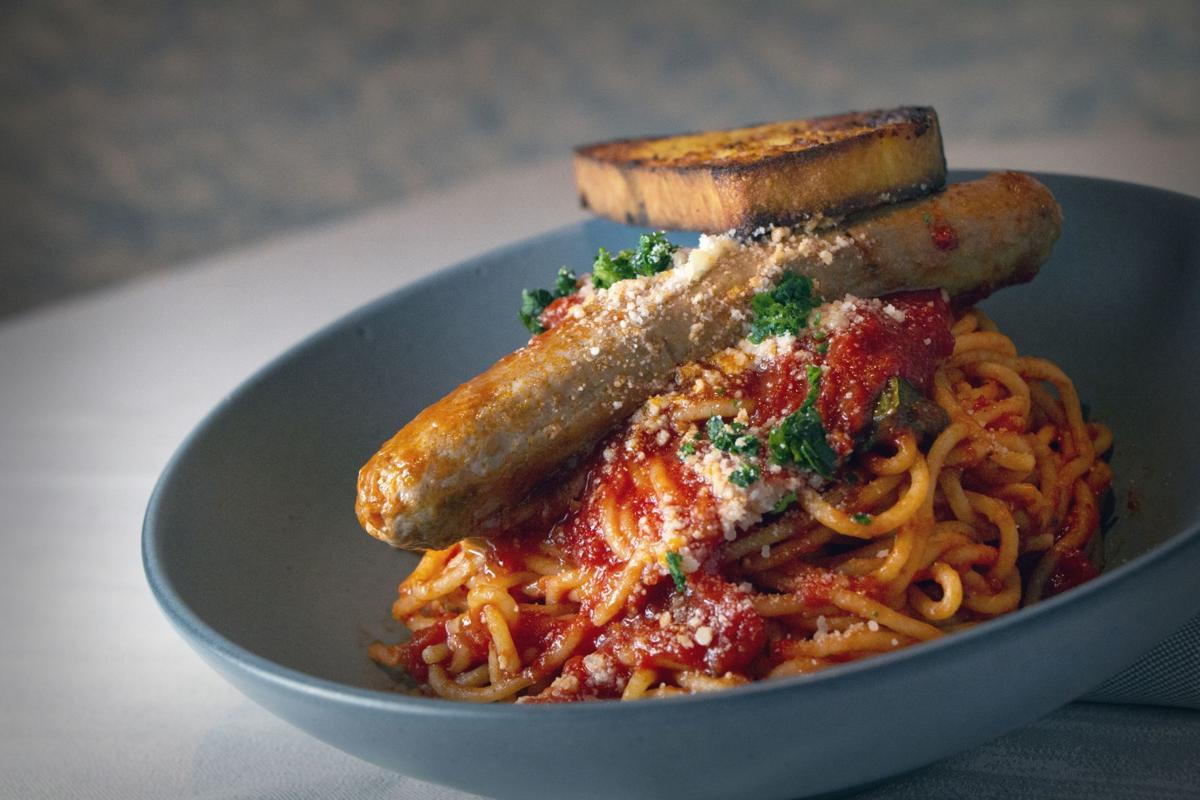 Bellissimo's spaghetti is made with harvest wheat varieties imported from Sonora. 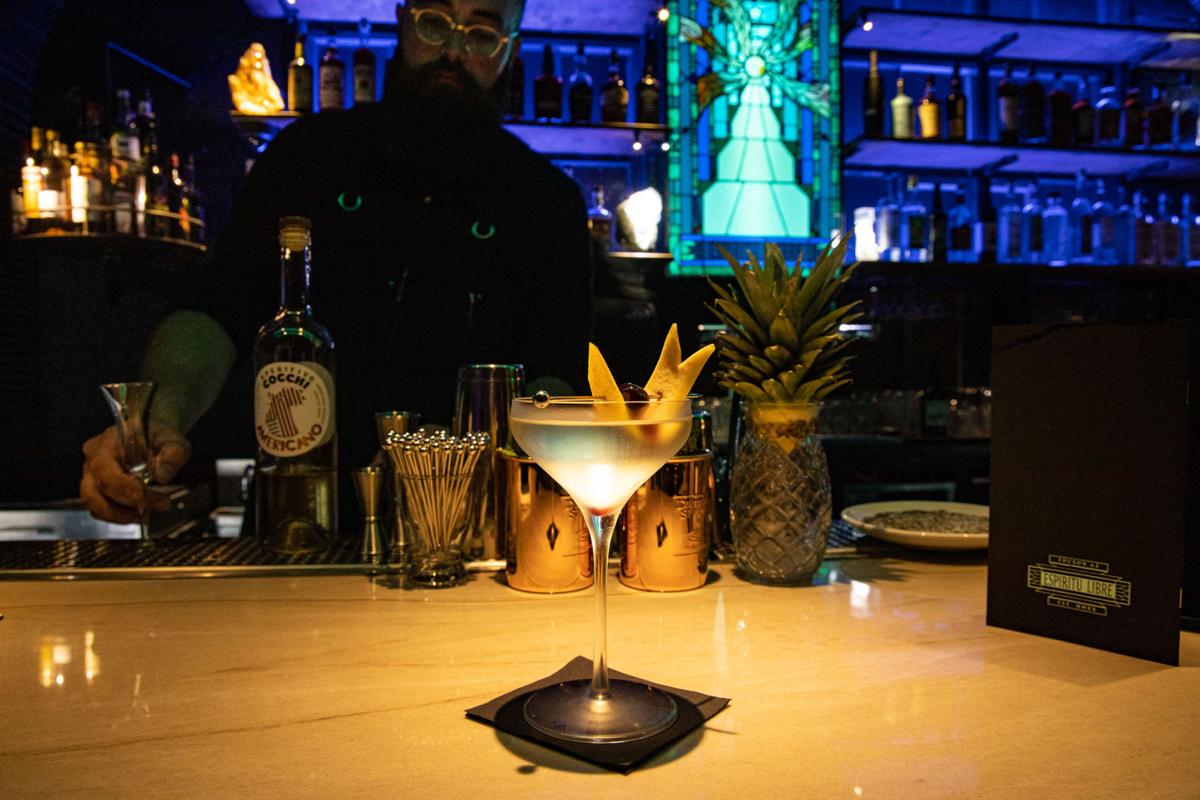 Kiss the Ring pairs mezcal with European apertifs like absinthe and Cocchi Americano, $11. Portal's cocktail team is headed up by Ryne Hoffman, mostly recently from the AC Marriott. 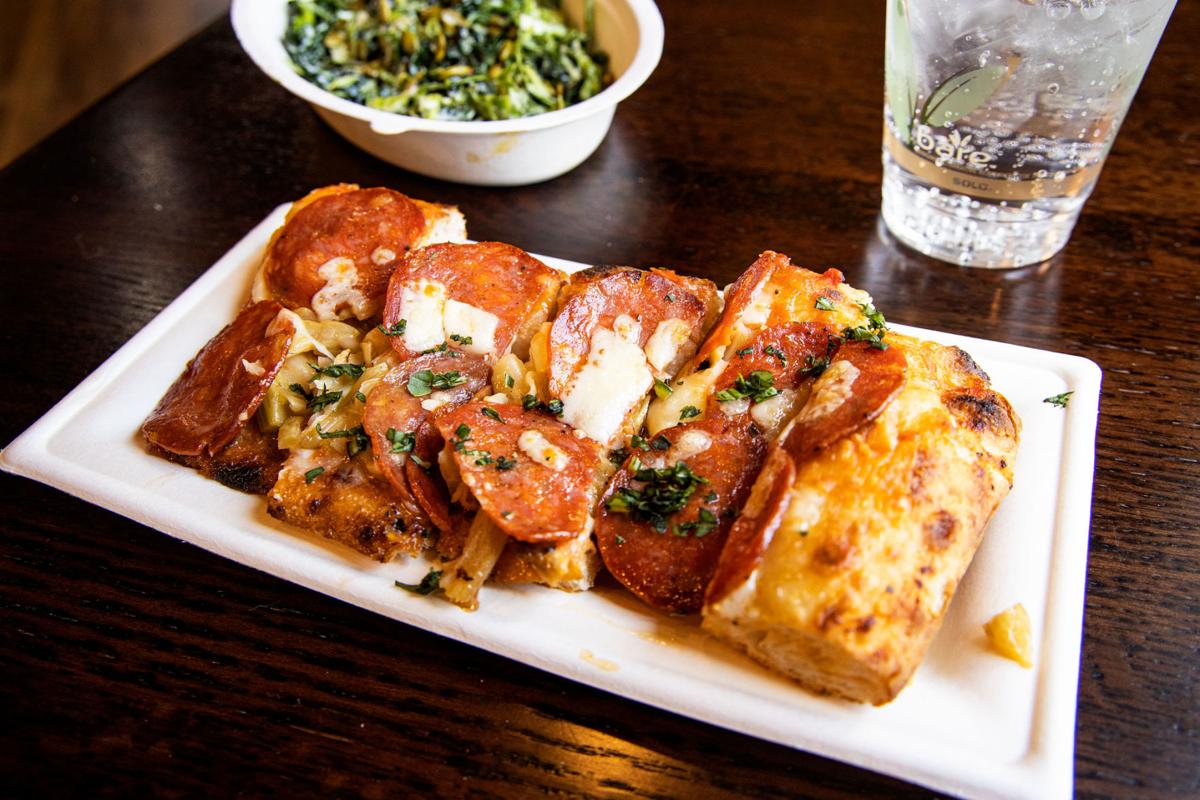 The salame pizza at Posto Sano has thick rounds of Calabrese salame and roasted fennel, $9.95. 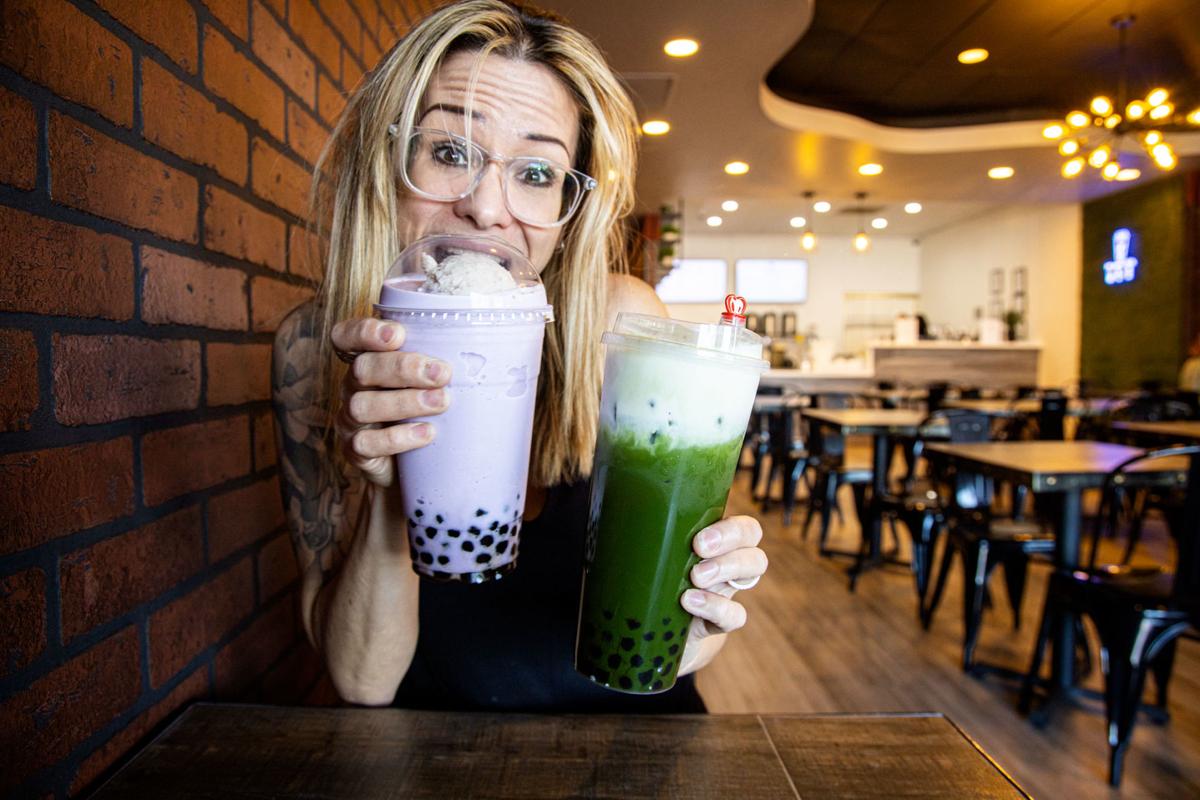 During our visit, Ni Hao Tea was full of local students getting work done. It's a nice alternative to your regular coffee shop. 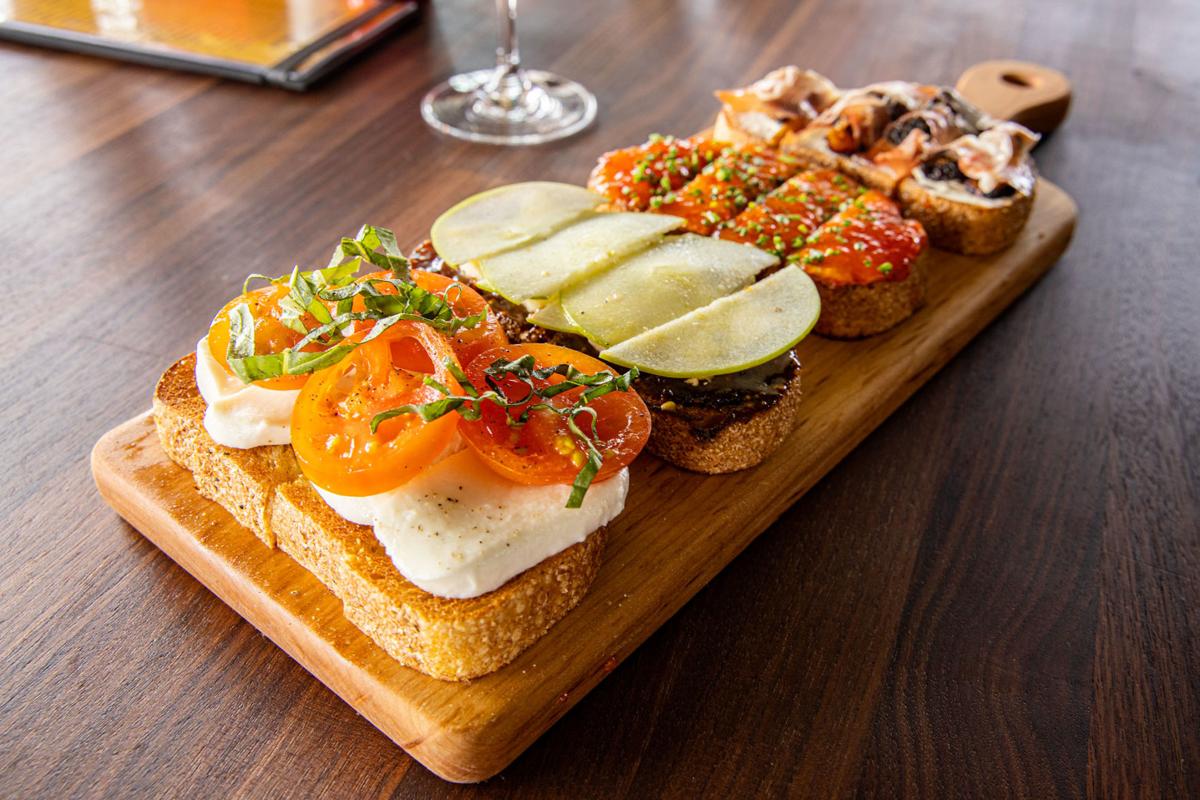 Choose from four types of bruschetta on the bruschetta board, $15. This one includes a mozzarella, tomato and basil; brie with apples and fig spread; sweet and spicy jam with goat cheese; and prosciutto and fig.

Wowie! It's been a month.

I'm currently recuperating from a slew of nonstop February openings in Tucson: cheese tea, three beer and wine bars, two Italian restaurants, and of course... the unicorn doughnut place that's popular across San Diego. It's like Super Tuesday, except the candidates are spaghetti and meatballs. They got my vote, although the frontrunner is currently bruschetta from Postino.

If you want something brand new this month, you can step inside a futuristic portal that serves craft cocktails. You can eat Roman-style pizza by the square up in the Foothills. And you can head down to the Pascua Yaqui reservation for handmade pasta and slots. It's a fun time to be here folks, appreciate it while you can.

Note: Remember to check out the bottom of this article for more food concepts coming up on the horizon. El Taco Rustico had one of the best tacos in town during my 100 Days of Tacos project back in 2016. You used to have to go down to the swap meet to get them, but now they're opening in midtown! So excited. 🌮

Casino del Sol brought back its Italian concept Bellissimo, with some contemporary updates by Executive Chef Ryan Clark. In true Clark fashion, he's sourcing the menu from Arizona suppliers like Pivot Produce, Hayden Mills, Queen Creek Olive Mill and more. The highlight here is fresh spaghetti, made by hand every day in the center of the restaurant using White Sonora Wheat from the Yaqui community of Vicam, Sonora. I haven't gotten the chance to try it out yet, but the press release advertises an awesome deal: $15 endless spaghetti on Tuesdays. The restaurant did have a large presence at the latest Savor Food and Wine Festival, and I was extremely impressed by their juicy meatballs.

Stopped by the @donutbartucson for these tasty bites. We tried a Unicorn Donut and a strawberry Big Poppa Tart. Yum! 🦄🍩 #thisistucson

Donut Bar is a hit all over San Diego with its whimsical creations like the unicorn doughnut and the Big Poppa-Tart stuffed with an entire Pop Tart. This is the first Tucson location, although there was a short-lived outpost in Scottsdale that closed in October. The downtown shop features a "cool glass window" where you can see your doughnuts being made in the kitchen. We passed around some doughnuts this week in the office, and the consensus was that the dough was thicker and more substantial than your regular doughnut. Read more about Donut Bar's Tucson location here.

"Ni hao!" That means hello in Chinese, and this milk tea shop just said "hello" to Tucson. (Do you like my joke?) Ni Hao Tea is located in the former home of the dearly-departed Mr. Goodcents sandwich shop on Broadway next to the Planet Fitness. The freshly-sliced cold cuts are gone, and in its place is a selfie wall that's covered in fake grass. Also, drinks made with ceremonial-grade matcha, which is much more potent and a step above your regular green tea. On our recent visit, we really enjoyed the purple taro smoothie made from freshly-steamed taro paste. There was a dollop of mashed taro on top, which gave the drink a sweet nutty flavor unlike anything I've ever had.

Step inside a portal to a new dimension located directly behind the main dining room of Ermanos Craft Beer and Wine Bar. This dimension includes modern cocktail classics like the white negroni, chilled with an ice cube that's literally been stamped with the bar's logo. This is Portal Cocktails, a feat of modern engineering... and a major mood. The Erman brothers commissioned a local aviation firm to design the ceiling, which features two miles of poplar wood slats that curve and glow with LED lights. The website describes the space as a "cozy womblike dirigible" inspired by the architecture of Oaxaca's major archaeological site Monte Alban. (I'm actually going there in a couple days, so I'll let you know!) Whatever you think it looks like, this really is pushing the envelope for Fourth Avenue, and they make a mean dirty vodka martini.

If you've ever spoken to a Phoenix hipster (yes, they exist!), Postino may have been part of that conversation. This Arcadia-based chain of wine bars has a huge following in the Valley of the Sun, and it was in fact the most hyped-up opening in Tucson this month. That's because Postino hits all the bases: the wine is interesting but somehow inexpensive, the decor is vintage cool, and the food is simple but yum. I was lucky enough to hit up their soft opening where I feel like I tasted half the menu. If you wanna go beyond the signature choose-your-own bruschetta board, I recommend the whole crispy cauliflower, partly because I'm still thinking about that lovely romesco sauce with the capers and yellow raisins. Others might go here to get sauced, but I would go here and just eat sauce. Seriously! Read more about Postino here.

From Daniel Scordato, the owner of Tucson's beloved upscale Italian restaurant Vivace, comes a new foray into fast-casual foods. Posto Sano is located in the revolving restaurant space that once held Cafe Jasper on the southeast corner of Campbell Avenue and Skyline Drive. I hope this concept sticks, because I really, really like it. I've never been to Italy before, but I felt like I was there when the server brought out a plate of square-shaped Roman pizza, which has a puffy texture almost like focaccia bread. Maybe it's the fact that they serve sparkling water for free, but the place feels like a sidewalk cafe you'd happen upon when in Rome. Also, they got lotsa good-looking wine. Read more about Posto Sano here.

Happy Friday! Time to kick back, relax, and reflect...even if for a brief moment

Our favorite Fourth Avenue nanobrewery has gone full-on EAST SIIIDE. Public Brewhouse opened a second location called Public Taphouse in the former Sierra Bonita Vineyards tasting room this February. The move allows them to expand their distribution across Tucson, writes Gerald M. Gay in the Arizona Daily Star. The cozy space and bottle shop offers Public's unique line of beers on tap, plus wine and other craft beers in cans. Next time I'm driving down Tanque Verde Road, I'll be sure to stop in for a quick Cats in Space! Read more about Public Taphouse here.

Who’s coming to eat at Dot’s Diner next month?! Thanks to @provokecreative for putting the final artistic touches on our outside facade, and to @dominicarain for taking these beautiful photos!

— Over in Bisbee, they're about to revive the popular 1950s-style Dots Diner, which is located on the grounds of The Shady Dell vintage airstream trailer park. Follow The Shady Dell's Facebook page for more updates.

— One of the most popular food vendors at the weekly Tohono O'odham Swapmeet plans to open a brick-and-mortar in the new couple weeks. El Taco Rustico is known for its mesquite-grilled meats like carne asada, which are expertly cooked by a former chef from Hacienda del Sol. El Taco Rustico is going into the building at 2281 N. Oracle Road that most recently held Cafe Marcel.

— The Denver-based breakfast chain Snooze AM Eatery is getting closer to being open. The inside of the space was still in the design phases during my visit last week to their neighbors Postino. The space is going in on Grant Road and Tucson Boulevard across the street from Culinary Dropout.

— An Indian restaurant called Spice Garden is going up near the Harkins Theatres at 5815 N. Arizona Pavilions Drive in Marana, according to the Discover Marana food blog. Stay tuned for more info!

Are these trendy fast-food chains worth the drive up to Phoenix?

White Castle, Shake Shack and Jollibee. They're all just a drive away.

Fried chicken and doughnuts?! Try the world's best combo at this Tucson shop

Alvernon Donuts started serving broasted chicken in January, and it's been real popular ...

The restaurant inside Casino del Sol has reopened with some contemporary updates using local sources.

No longer a sandwich shop, this location at 4726 E. Broadway, has a wide variety of teas and other beverages.

Located behind the main dining room of Ermanos Creft Beer and Wine Bar, at 220 N. Fourth Ave., is a feat of modern engineering and serves mode…

Public Brewhouse has opened its second location at 6720 E. Camino Principal, Public Taphouse. It offers beer on tap, wine and other craft beer…