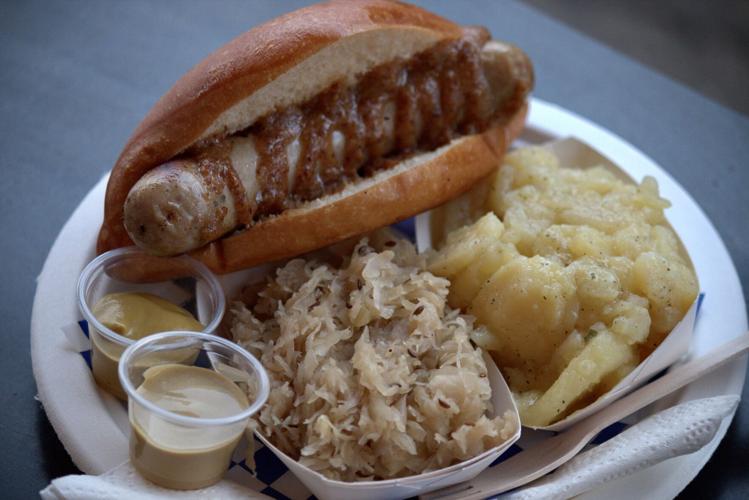 Bratwurst, potato salad and a generous serving of sauerkraut from Haus of Brats food truck. 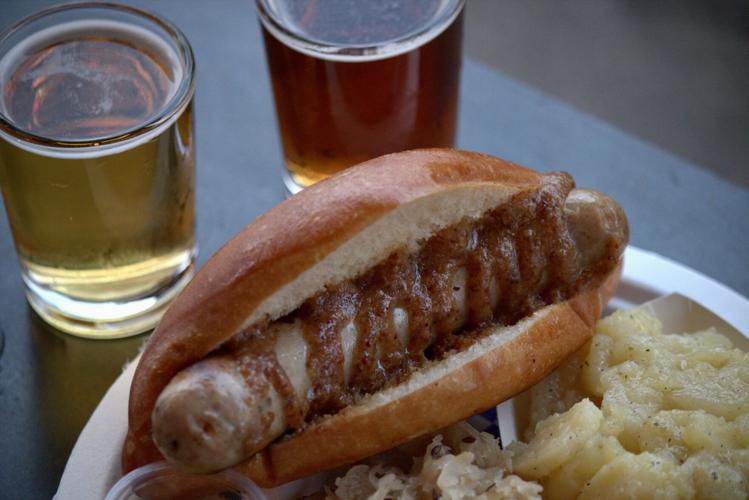 Haus of Brats founder Petra Williams tried products from dozens of butchers across the country before choosing Haus of Brats' supplier. 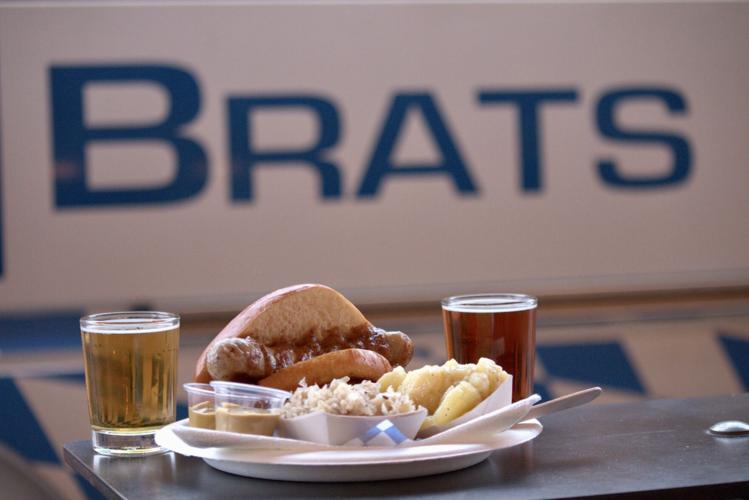 Petra Williams founded Haus of Brats with her friend Angela Otter in 2013.

Tucson used to have German food.

Schulz the Butcher on Oracle Road, Dreher's Quality Meats and Sausage on what was once the east side. My grandmother would drive out from her house past the Forty Niner Country Club to source the meats at the heart of her cuisine.

Today, we have Haus of Brats. Petra Williams, who moved to Tucson from München, Germany, founded the food truck with her friend Angela Otter in 2013, when she could no longer bear the glaring hole Tucson suffered.

"They couldn’t find any German food anywhere, or at least good German food in their mind. And the rest is history," Brandon Moore, Petra's son-in-law, said.

"I don't think they realized how big a niche it would find in Tucson," Brandon said.

There might not be a cuisine as widely known and yet deeply misunderstood as German food. Brandon did not enjoy German food until he met his now-wife, Petra's daughter, Vanessa Moore.

"I did not like Bratwurst or Sauerkraut when I was growing up," Brandon said. "And it’s because I never had a proper or good one. When I first tried the Bratwurst, these recipes that Petra passed down, it completely changed my perspective." After Petra retired, Brandon took over the business with Vanessa.

Haus of Brats' short menu has two kinds of foods: those Americans tend to do wrong, and ones Americans haven't heard of. Haus of Brats is here to convert you. If you think you know Bratwurst — even if you like Bratwurst — try it here. Meet it again. You might, like Brandon, fall in love.

The food Americans are least familiar with is undoubtedly the Leberkäse, which has a devoted following among the in-crowd: when Haus of Brats visits the Air Force base, the Omas and expats will sell them out.

"I describe it in a way Vanessa hates. It's like a fried bologna sandwich," he said. Vanessa interjected: "but way better."

"Petra used to call it German meatloaf, but people would have an expectation of American meatloaf and be confused," he said. Leberkäse is much more finely processed, using a complex machine that grinds ice into the mixture of pork and veal.

The result is an incredibly succulent, tender, crispy-edged fried sandwich that is truly unlike anything you can find in Tucson.

I can make that bold claim because I know the game in town. By the time my Oma left Tucson in 2021, we were making semiannual trips up to Phoenix to stock up on baked goods and holiday treats at Old Heidelberg Bakery and sausage and cold cuts at the German Sausage Company, where Omas still order in German.

Petra knew about these places, too: before opening Haus of Brats, she embarked on a tour of German butchers across the country.

"She sampled 50, 100 suppliers before settling on the family we use now for all our meats out of a shop in Orange, California," said Brandon.

This Oktoberfest, they're visiting the supplier in person, to sample new products and transport their big order themselves.

"This is our busiest time of year," Brandon said. They book up over a year in advance. "Everyone wants to have Oktoberfest parties," he said "but there are only so many weekends."

When I suggested that an Oktoberfest wasn't complete without their authentic menu, Brandon demurred diplomatically: "Oktoberfest is about the beer," he said. Which it is. Unlike Cinco de Mayo and St. Patrick's Day, which have turned into drinking holidays in the States, Oktoberfest is about drinking in the first place.

At the big event in München every year, the itinerary is built around drinking beer for as long as you can. There is a huge lawn here everyone crashes for a midday nap before partying into the night. The difference in America is that we only celebrate it on the weekends.

"I think it's grown. We've kind of seen the trend. The first one we ever did was at Arizona Beer House and it was really, really successful," he said. "I think word got out after that, then you hear another beer house doing it, and another one. It's grown in the last 3-4 years I'd say. I'm not sure why. I think word of mouth."

This year, they're hoping to get special menu items for the holiday. A few months ago, they installed a fryer to make pommes frites (the traditional accompaniment, rather than a bun, to Currywurst). But combined with their grill top in the scorching Tucson summer, it's been too hot to handle. The weather will hopefully accommodate the fryer by Oktoberfest.

They're also hoping to introduce Tucson to Nürnburgers — finger-sized, pale sausages that fry up to an unbelievable, snappy crispy crust while maintaining a juicy bite. "They pair great with our potato salad," Brandon said. While each Oma has their own regional take on Kartoffelsalat, Haus of Brats uses a simple, vinegar-based recipe.

"We get a lot of people who don't know what a bratwurst is," he said. "Like a hotdog?" some ask.

But as the years go by, more niche specialties like Leberkäse are becoming more and more popular.

"If somebody's on the fence ... we cut off a little slice for them," said Brandon. "Let's get you a piece."

For more information about Haus of Brats and to find out where they'll be next, visit their website.

We're launching a new Tucson newsletter. Here's everything you need to know. 🎉

#ThisIsTucson is launching a new newsletter on Sept. 30! The #ThisIsTucson Rewind newsletter provides a monthly recap of all things Tucson life and includes exclusive content you can only find in the newsletter.

Where to find Greek food in Tucson: The Tucson Greek Festival isn't happening this year, but you can still eat like a Greek at these five restaurants in the Tucson, Arizona area.