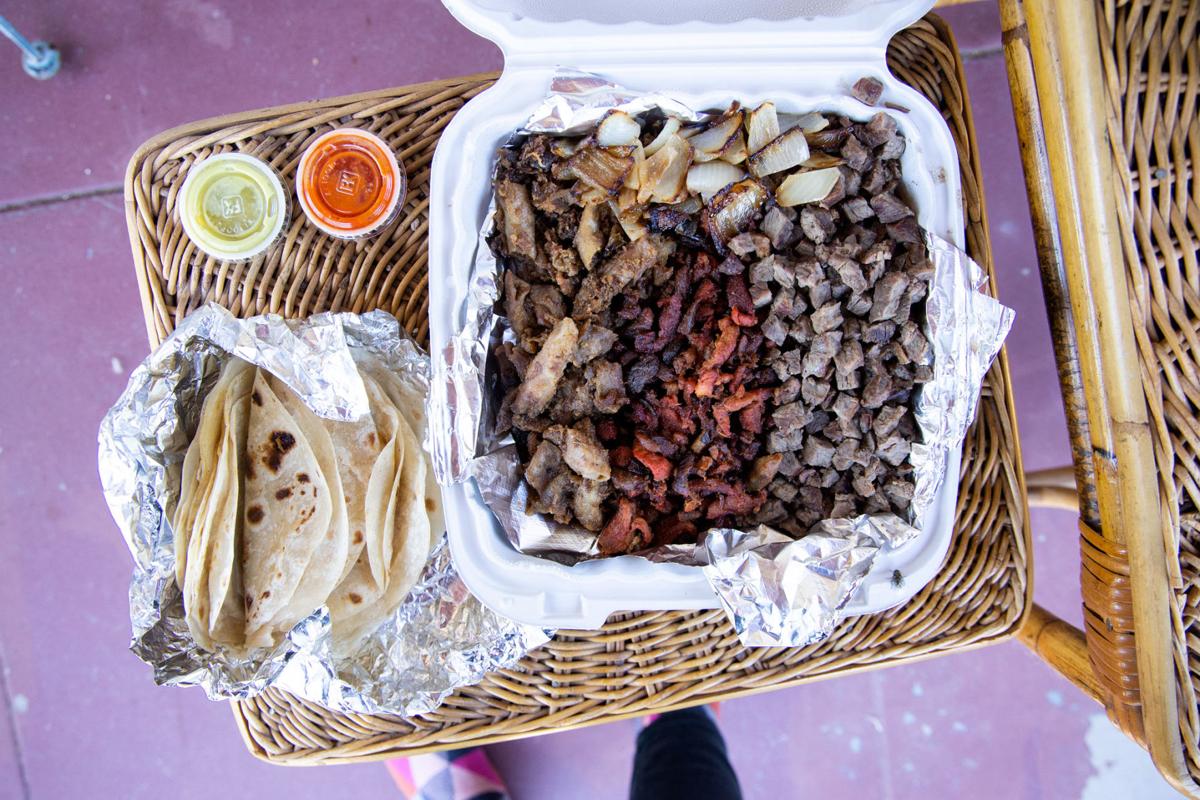 El Rustico's parillada, or meat platter, comes with three types of meat for $23. I chose tripas, al pastor and carne asada. Eaten on my porch. 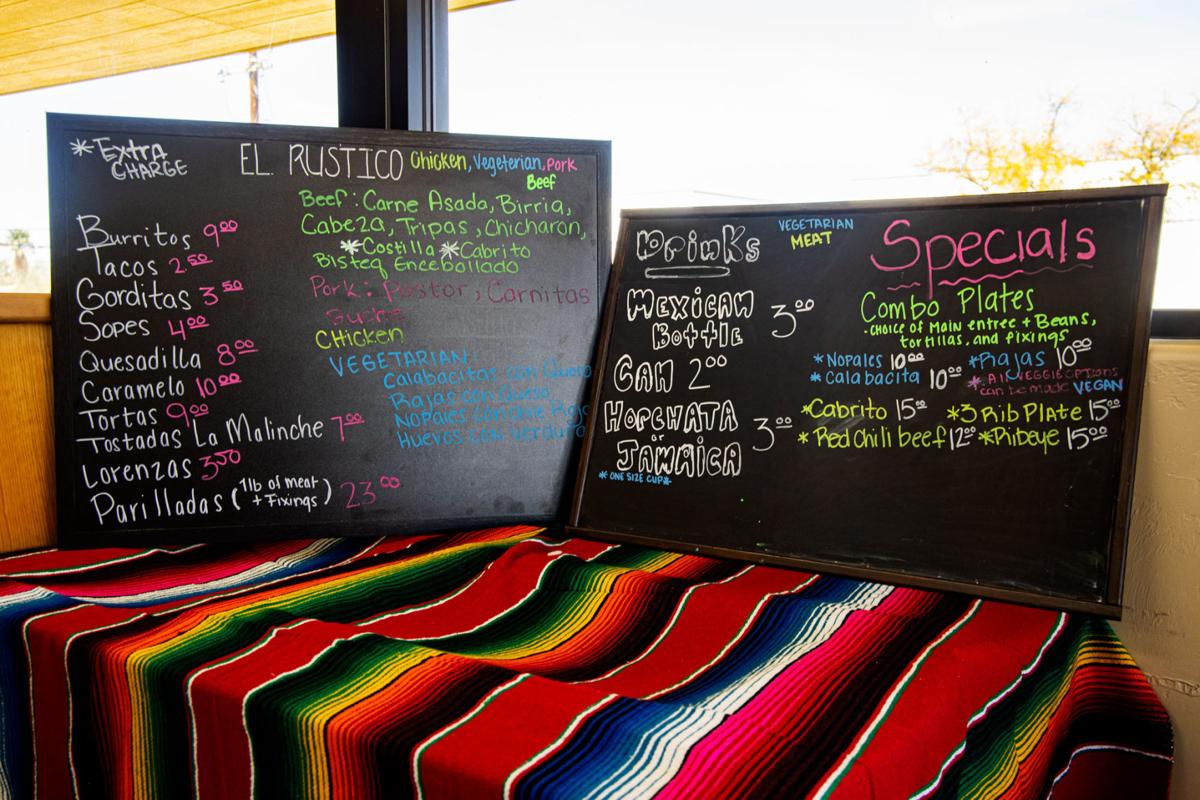 The menu at El Rustico is all about the meat: mesquite-grilled carne asada, cabeza, tripas and more. 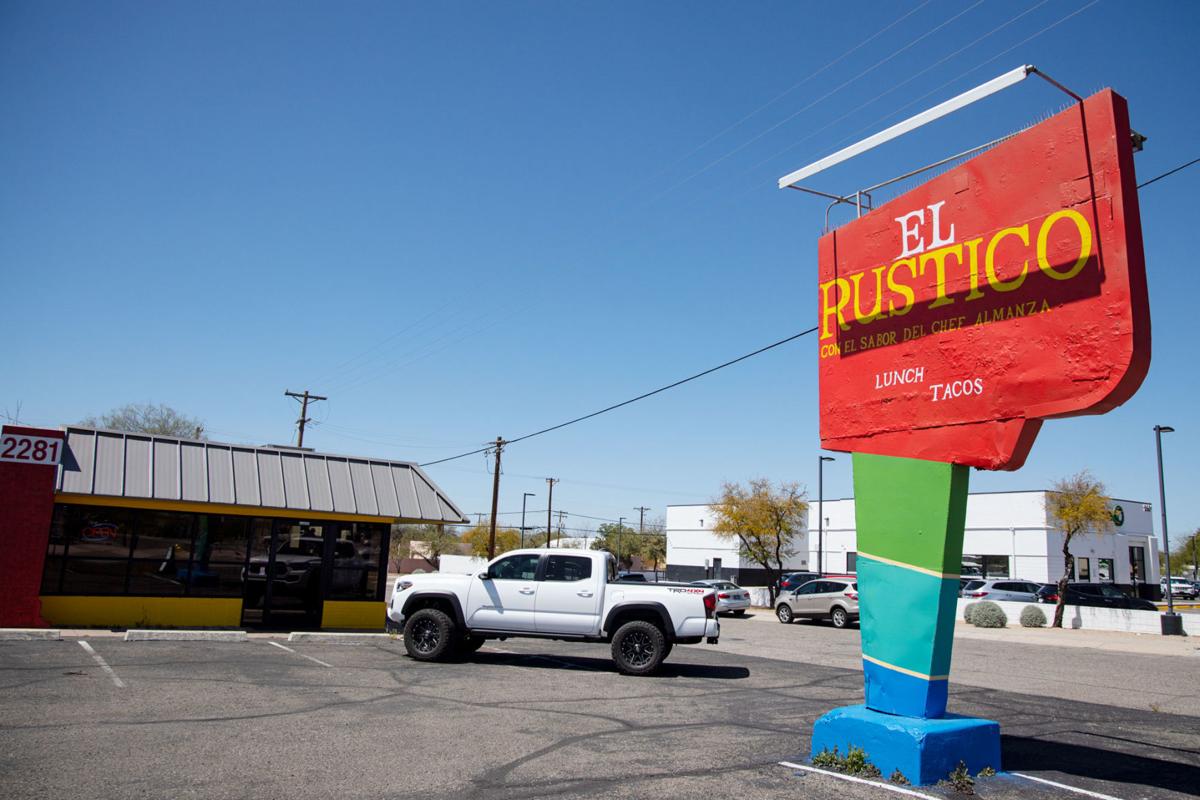 El Rustico is on the southwest corner of Grant and Oracle roads, near the Old Pascua neighborhood of Tucson.

Juan Almanza was all prepared for a smokin' weekend of Mexican barbecue at the Tohono O'odham Swapmeet. The charismatic chef had attracted a rabid  following in the foodie community, who would routinely make the trek down to the reservation for a taste of his succulent, mesquite grilled ribs.

But on the evening of Friday, March 20, he got a call saying the swapmeet at 5721 S. Westover Ave. was closing up shop for the foreseeable future to limit the spread of coronavirus. He would not do another shift at El Taco Rustico anytime soon. "I had already bought everything, all the meat. I had bought a lot of stuff," he said.

Juan was already very close to achieving his dream of opening his own restaurant. Since he had come to the US from Coahuila, Mexico, he had worked everywhere from the southside Mexican joint El Merendero to high-end kitchens like Hacienda del Sol. Recently, he had purchased a humble spot on the southwest corner of Oracle and Grant Roads, diagonal to El Güero Canelo ... but despite having his permits in order, he wasn't quite ready to open yet.

So the next day, instead of grilling meats at the dusty outdoor swapmeet, the family opened the doors of their first restaurant. Painted over the old Cafe Marcel sign, the new words popped out in bright yellow: "El Rustico: Con el sabor del Chef Almanza."

Meanwhile, restaurant owners across Tucson were experiencing the biggest professional challenge of their careers. That same week, dining rooms across the city were shutting down due to a citywide mandate, and businesses were strapped for customers and cash flow.

Luckily, Juan had friends in the local chefs' group the Gastronomic Union of Tucson. When word got out, the team sprung into action and did everything they could to help Juan open his doors for takeout.

"The community has really rallied around him," said Fresco Pizzeria owner Mat Cable, who was on hand one afternoon to help out. Mat had been working most days to help get El Taco Rustico running, and then would go "put out fires" at his own restaurant in the evenings. "Other restaurateurs are pretty much keeping each other afloat ... People are just really stepping up and helping each other out."

Like the afternoon Mat was at El Taco Rustico with Carl Shultz, the vice president of the restaurant group Tucson Originals. Karl was helping set up Juan's point of sale system, and in walks Rocco DiGrazia of Rocco's Pizza ... just to buy some food.

Parish chef Travis Peters helped get Juan some publicity by inviting him to participate in a video project highlighting the need for Tucsonans to support restaurants by purchasing takeout once a week. The video came about when Travis put a call on Facebook for Tucson's food media to come together and make something to save Tucson restaurants. After some email exchanges and a heady conference call, the group of journalists appointed Scot Liteer of Liteer Films to produce the video, and Travis to pick the chefs.

"Estamos todos en esto juntos," Juan says in the video: "We're all in this together."

So far, business at El Taco Rustico has been going well. Juan was able to fill a large takeout order for the employees at St. Joseph's Hospital. And yesterday he did $900 in sales. But of course, that's also because his tacos are really good.

Juan is waiting to put in a bigger grill, but right now he's cooking everything in a little smoker behind the restaurant. Because he's from the northern state of Coahuila, his grilling style is a little bit different. Rather than using a crank-style grill to move the racks up and down, he controls the heat by hitting the coals and covering the meat with a lid. Make sure to try his cabrito or slow-roasted goat, a specialty in the city of Torreón where he's from. As the kids say these days, it's fire! 🔥

This is the first part in a series that chronicles local restaurants.

Cheers: The Tucson community is finding innovative new ways to drink together while apart

You can sign up for one of these events yourself.

Tucson workers that have been laid off because of coronavirus may receive a $50 grocery gift card. Local restaurants and bars must first apply by the end of day Friday.

Now on its third round, this gift card program is raising more than 100K for downtown businesses

The deal starts April 17 where you can buy a gift card for a local downtown business and get a bonus gift card funded by Downtown Tucson Partnership and Rio Nuevo. The business gets the cash immediately.