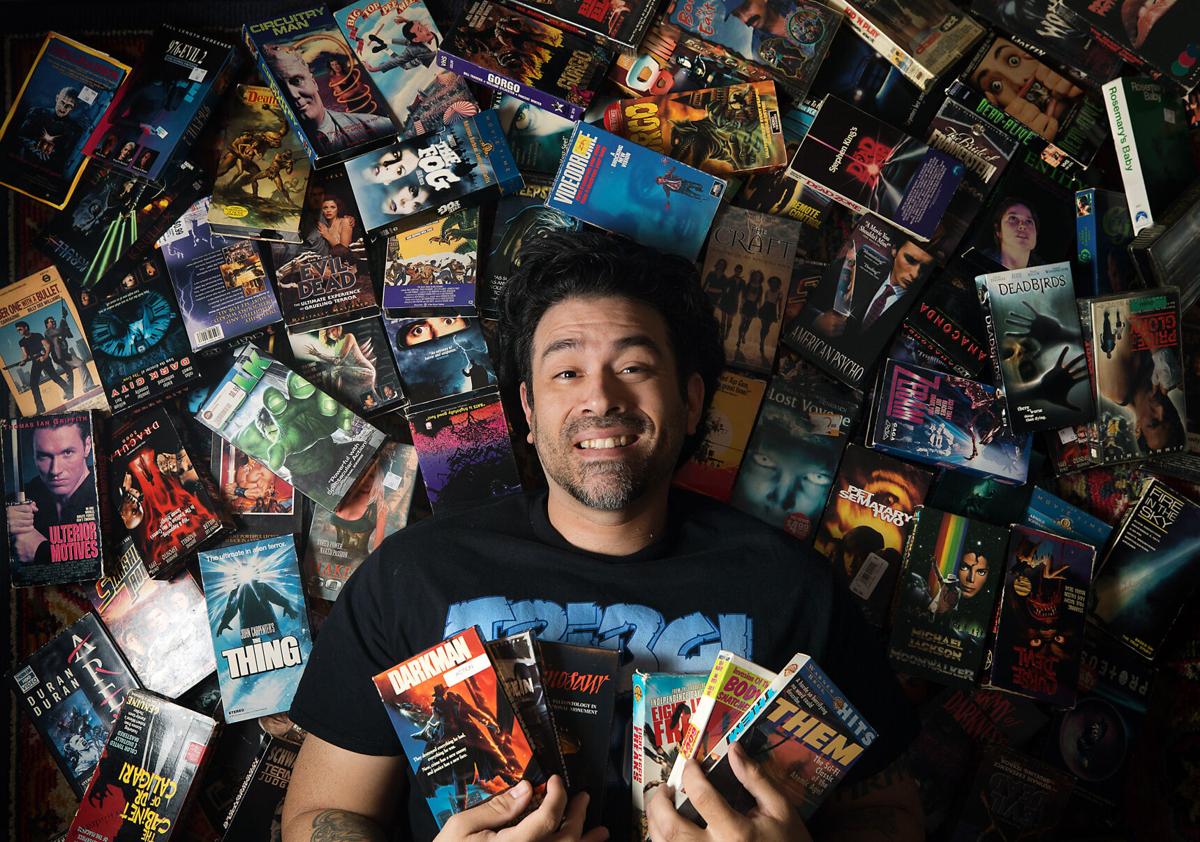 Mike Olivares says he owns approximately 2,600 VHS tapes. Some are at his home and the rest are in storage. He started collecting in 1990 and just kept going. Olivares is the organizer of the VHS bazaar, that will take place this year as part of the Arizona Underground Film Festival at the Screening Room. 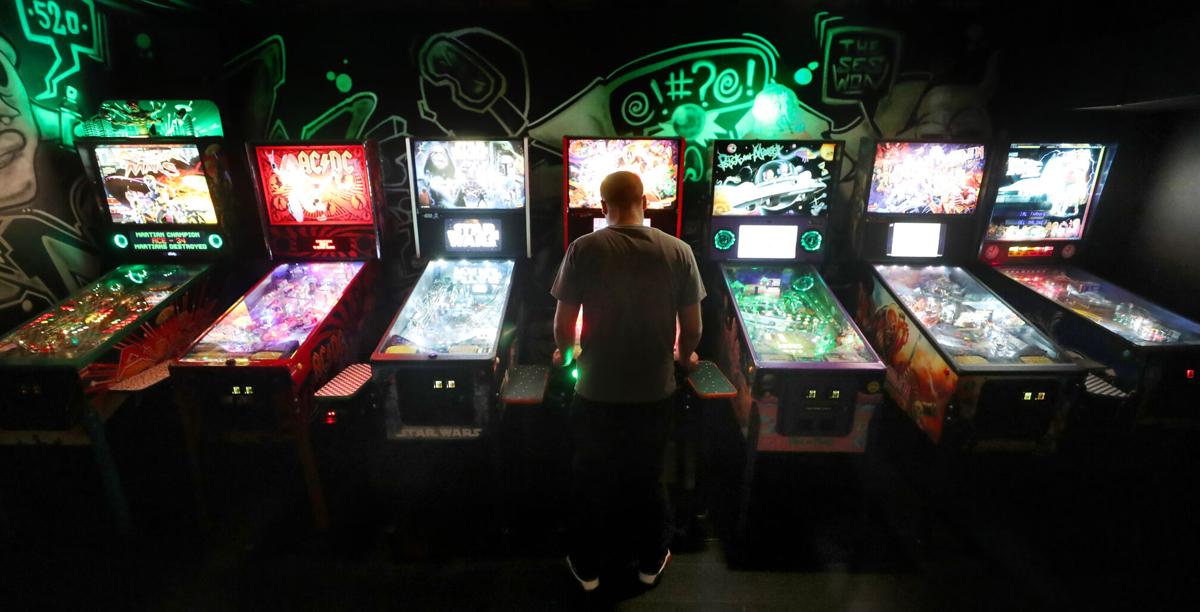 Isaac Baez takes a turn on one of the line-up of pinball games on the second floor at Cobra Arcade Bar in Tucson. 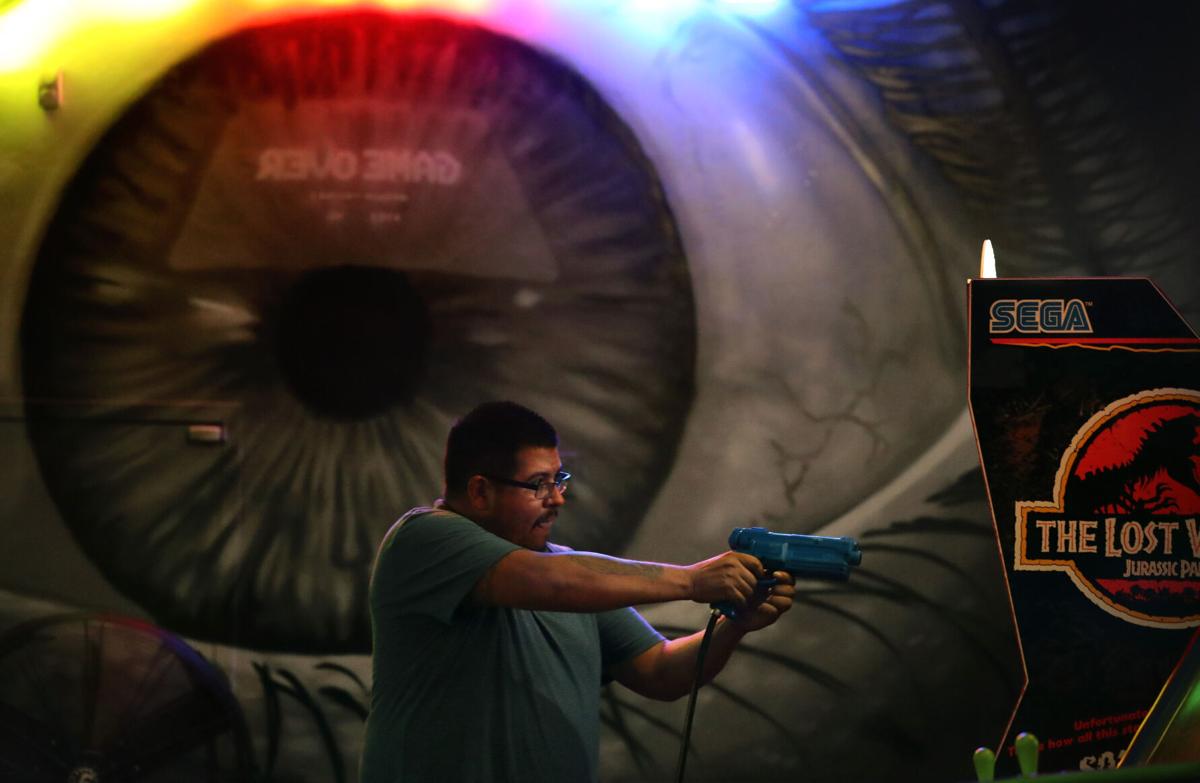 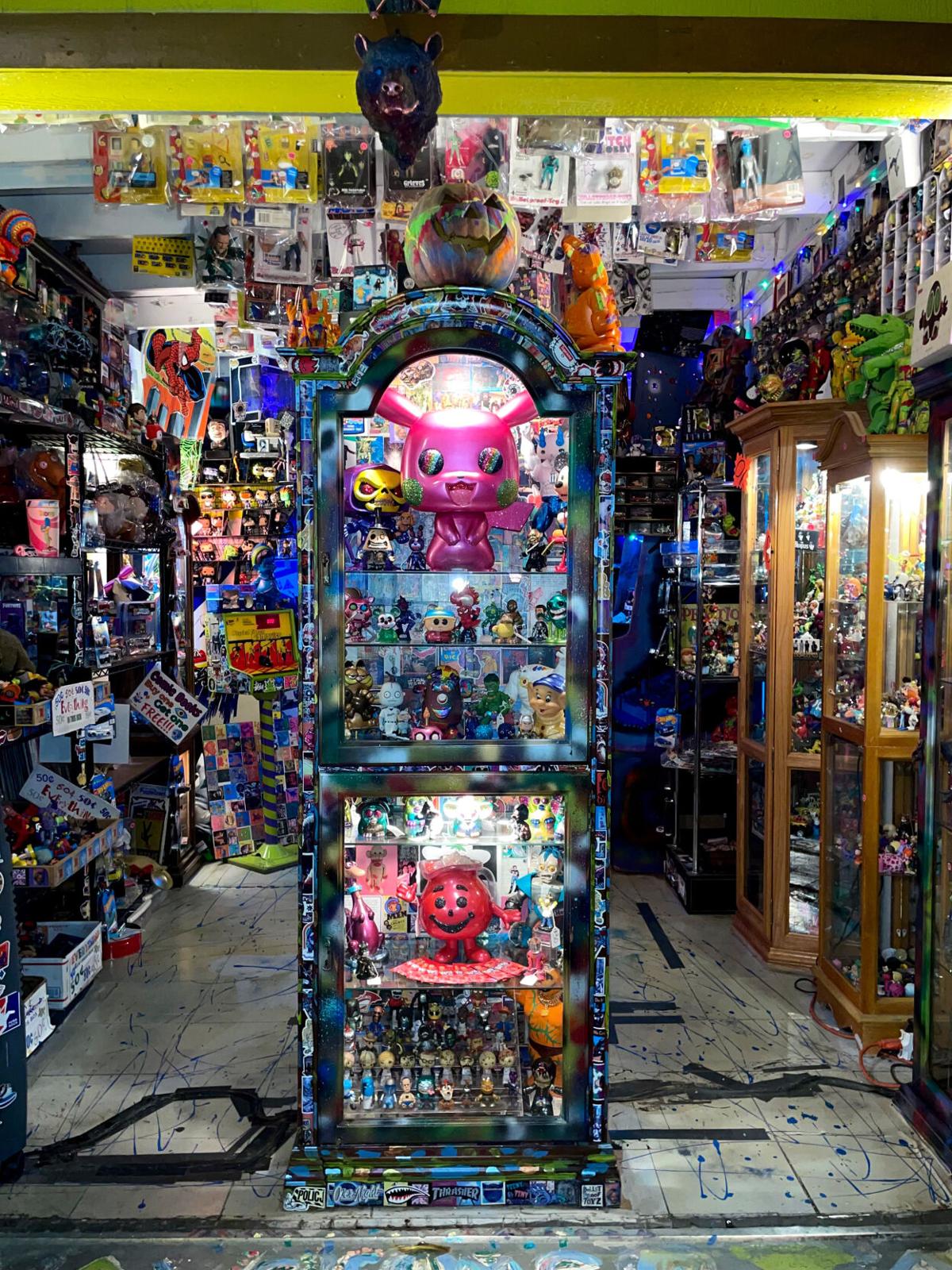 El Haberdashery, a toy shop at the Tanque Verde Swap Meet, that sells a lot of 80s and 90s toys. 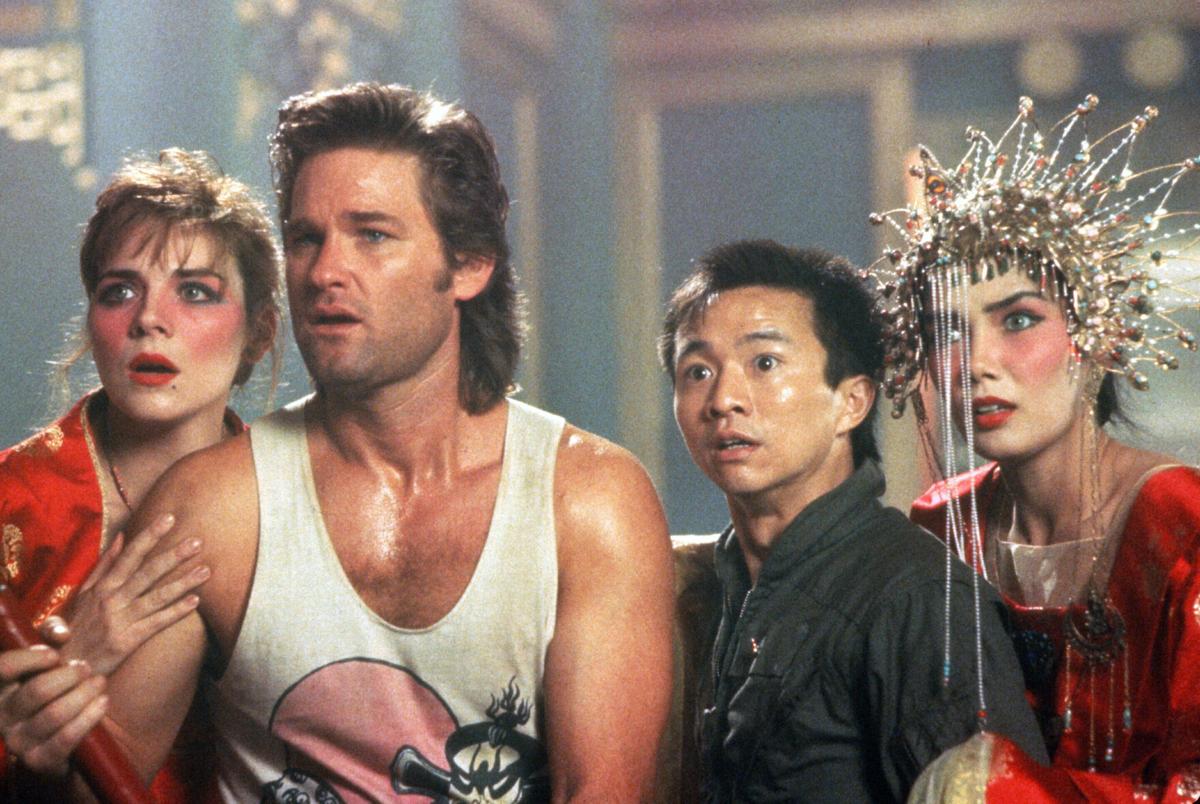 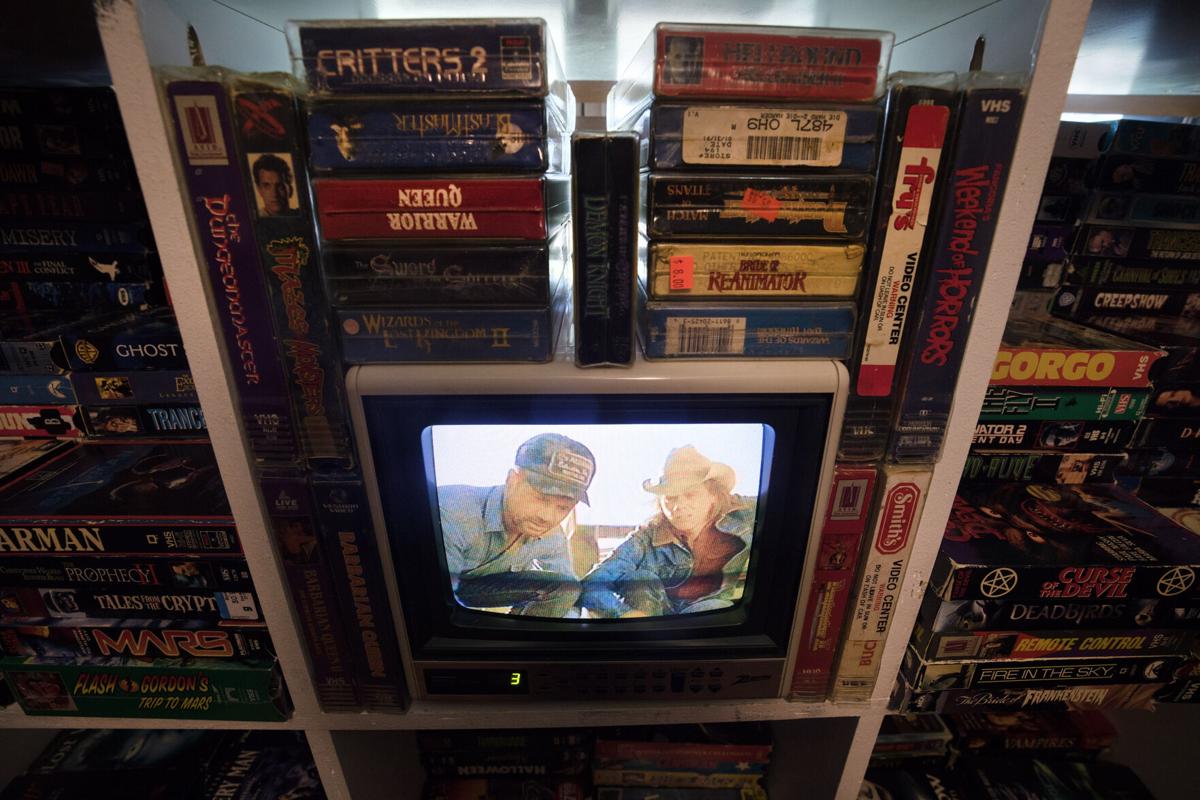 Mike Olivares, a VHS collector, says his titles of choice are horror films, movies like “Critters” and “The Dungeonmaster.” He picks up what he can at thrift stores and garage sales.

For Tucsonans in their 30s and 40s, the 1980s were a magical time filled with parachute pants and Teddy Ruxpins, New Kids on the Block on the radio and He-Man fighting Skeletor for the powers of Castle Grayskull on Saturday mornings.

A lot has happened since then. Those toys, cassettes, video games and other ‘80s relics you loved were sold off years ago by your parents, and technology has advanced to the point that you no longer have to get up or even move to change the channel on your television. You just ask Alexa to do it.

Still, like any pop culture artifacts from days gone by, they didn’t all end up in the landfill. Your childhood is alive and well on the streets of Tucson, waiting to be purchased, watched, listened to and played with.

If you grew up in the 1980s, here are a few ways to recapture the magic of your youth.

Mike Olivares can boil down one of his greatest passions in life to three simple words: Be kind, rewind.

At 38 years old, Olivares is a child of the ‘80s. His early years were filled with simple pleasures; snacking on Fun Dip and catching the latest episodes of “Teenage Mutant Ninja Turtles.”

Among his fondest memories was hitting the local video store with his family to rent VHS tapes for some evening entertainment.

“There was a Zip’s at Ajo and Mission,” Olivares said. “Right across from Kennedy Park. We would get our Little Caesars family dinner, go to Zip’s and rent ‘The Goonies’ for the 15th time.”

Olivares never lost his love for VHS tapes. Today he collects them. He watches titles from his vast library at his home office during his days off as manager of the Zia Records on East Speedway.

He even helps organize regular VHS bazaars, where like-minded fans of this old-school technology can buy, sell and swap tapes from their own collections.

The next VHS Bazaar will be held this Sunday, Sept. 19, from noon to 4 p.m. at the Screening Room, 127 E. Congress, downtown, as part of the Arizona Underground Film Festival. It is free and open to the public.

Olivares said the VHS community is small but mighty in Tucson. You can expect maybe four to five vendors with hundreds of titles at the bazaar, some rare, some more common, as well as classic movies playing on the big screen.

For Olivares, the draw to VHS tapes is not the value, and there can be value. A factory sealed 1984 VHS copy of “Star Wars” sold on eBay just last month for $12,000.

He is in it for the love of the media. His titles of choice are horror films, movies like “Critters” and “The Dungeonmaster.” He picks up what he can at thrift stores and garage sales.

“That nostalgic aspect sticks with a lot of us,” he said. “When I see stuff, dollar signs don’t shine in my eyes. It is more like, ‘That’s awesome. I’ve never owned that. I’ve always wanted that.’ “

Olivares keeps the bulk of his collection in his office, each one diligently rewound for future use.

“There is nothing worse than when you are ready to watch a movie and it is all the way at the end,” he said.

Find out more about the VHS Bazaar at azuff.org

All fun and games

Stroll through arcade chains, like Dave & Buster’s, 1390 E. Tucson Marketplace Blvd., and Round One at Park Place, 5950 E. Broadway, and you’ll find massive versions of classic video games from the early 1980s, titles like Galaga and Centipede, but on steroids.

But for the true old-school arcade experience with an adult twist, Cobra Arcade Bar at the corner of East Congress and North Scott Avenue, downtown, is the place to be.

The gaming bar, a spinoff of the original Cobra Arcade Bar in Phoenix, comes packed with two floors of classic games from the 1980s and ‘90s.

Arcade games are regularly rotated in and out of Cobra to keep things interesting.

Also interesting: Cobra’s full bar, with its menu of cocktails named for characters from your favorite video games (would you prefer an Inky’s Drinky or a Princess Peach?)

When your joystick hands get tired, you can hang out with friends in the bar’s lounge-style seating or on the patio area that looks out on East Congress while DJs play every Wednesday-Sunday.

French said there is never a cover or a dress code at Cobra, where they try to be as welcoming as possible.

“I find a lot of people come in and have an idea of what they want to play before they even take a look around,” he said. “Everybody has that story of the gas station or the laundromat in their town that had two arcade games. They want to play those games again.”

Some of the city’s most prominent establishments in the toy resale game include the long-running Retro Toys and More, 2602 N. Stone Ave., and Generation Cool, 404 N. Fourth Ave.

For the true ‘80s toy connoisseur looking for smoking deals on classic figures, there is only one place to hit on a Friday or Saturday night: the Tanque Verde Swap Meet.

Once located on East Tanque Verde Road, the swap now calls 4100 S. Palo Verde home, and can pull in hundreds of dealers during the fall and spring seasons.

Anything and everything a Tucsonan can unload can be found at the swap, but toys are a common sight, whether they are being sold by their original owners looking to make a few extra bucks, vintage dealers setting up on folding tables for the evening or regular sellers with permanent structures on the lot.

One of the more visually pleasing toy destinations at Tanque Verde is El Haberdashery, located on the northeast side of the swap meet.

Thousands of toys and vintage items, many from the 1980s, including plastic lunchboxes with their matching Thermoses and Snork plush dolls, fill every inch of wall space, line shelves and decorate hollowed out arcade game cabinets within the space.

Husband-and-wife team Luther and Bonnie Jako go out of their way to make going into their building a wild ride.

“It adds to the fun and enjoyment,” Luther Jako says. “I am really big on the displays being as amazing as the things inside.”

The Jakos don’t only focus on vintage toys.

“We try not to be biased,” Luther Jako said. “We are not kids ourselves, so we don’t really know about anime or the latest trends. We think all toys are cool. Whatever people are into, we try to stock it.”

But they do make sure to have their fair share of the older stuff.

“Nostalgia makes everybody happy” Luther said. “And everything old is new again and cool. There are 5-year-olds that know things that we grew up on.”

The Jakos even make their own custom toys, using bits and pieces from broken action figures that they find at the swap meet, on Facebook Marketplace or even take as trade from regular customers.

Both create, but Bonnie says Luther can really get into the process.

“He drills into their heads, uses epoxies,” Bonnie Jako said. “He has made up to 30 custom toys in a week.”

In the long term, the Jakos plan to hopefully expand their vintage and custom toy empire to a second location in Tucson. Luther Jako also hopes to one day open his own arcade in town.

For now, they are happy watching kids, families and toy collectors, marvel at and pick through their displays.

“We blend it all together because we want people to treasure hunt,” Luther said. “That is part of the fun of Tanque Verde. Being rewarded for looking really hard.”

Classic films on the big screen

If you’re VHS player is broken, or you haven’t owned one since George H.W. Bush was president, you can always catch some classic ‘80s films at The Loft Cinema, 3233 E. Speedway.

The independent movie house’s Cult Classic series has featured a recent run of flicks from the 1980s. Last week it was “Howard the Duck.” This Friday, Sept. 17, and Saturday, Sept. 18, it will be screening the 1986 John Carpenter action movie, “Big Trouble in Little China,” starring Kurt Russell.

Swing through on Sept. 24, 25 or 30 and catch David Lynch’s 1984 adaptation of the Frank Herbert novel “Dune” before the remake comes out in October. Cult Classics are $8 general admission, $6 for Loft members at loftcinema.org.

Not up for venturing out yet, due to the delta variant? Stream some 1980s movies that were filmed right here in Tucson on your television at home. “Can’t Buy Me Love,” the teen comedy starring “McDreamy” himself, Patrick Dempsey, can be seen for free on Tubi or purchased to stream on a number of services, including Amazon, Google Play and Vudu.

“Revenge of the Nerds,” filmed in several locations on the University of Arizona campus, can currently be seen on the subscription service HBO Max.

'Revenge of the Nerds' filming

'Revenge of the Nerds' extra casting

'Revenge of the Nerds'

Stars of 'Revenge of the Nerds'

'Revenge of the Nerds' filming

The Screening Room in downtown Tucson has more than 60 feature films and shorts ready to go for this year's fest.