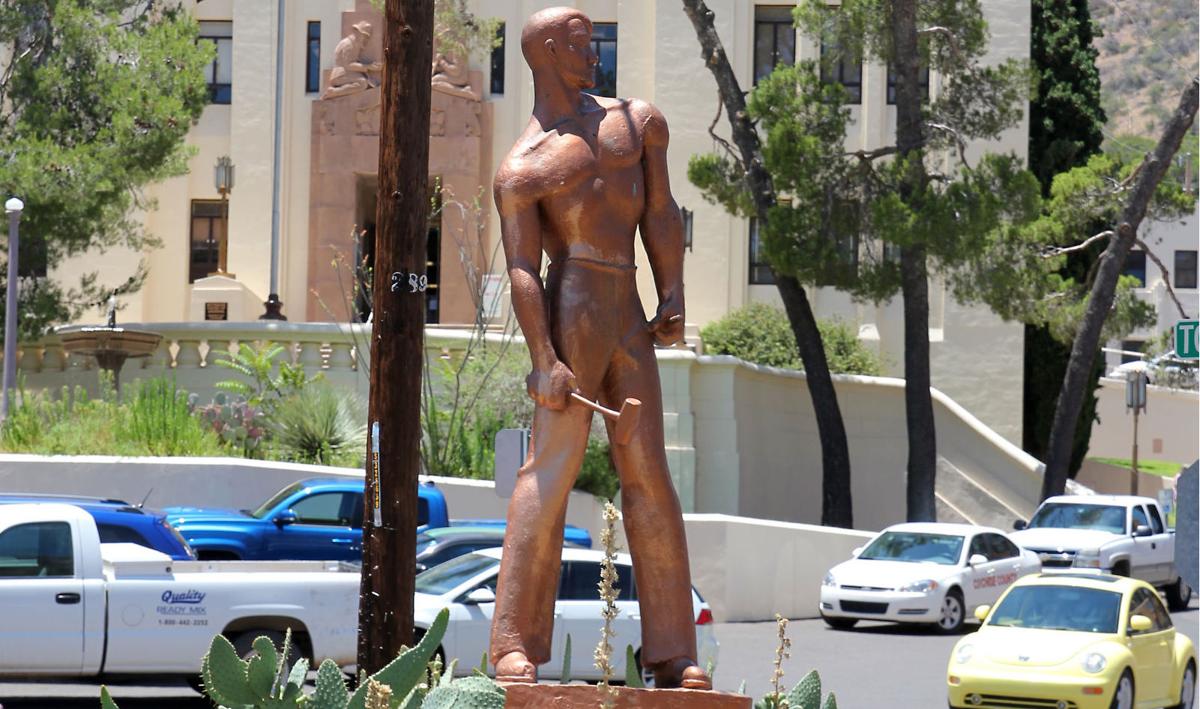 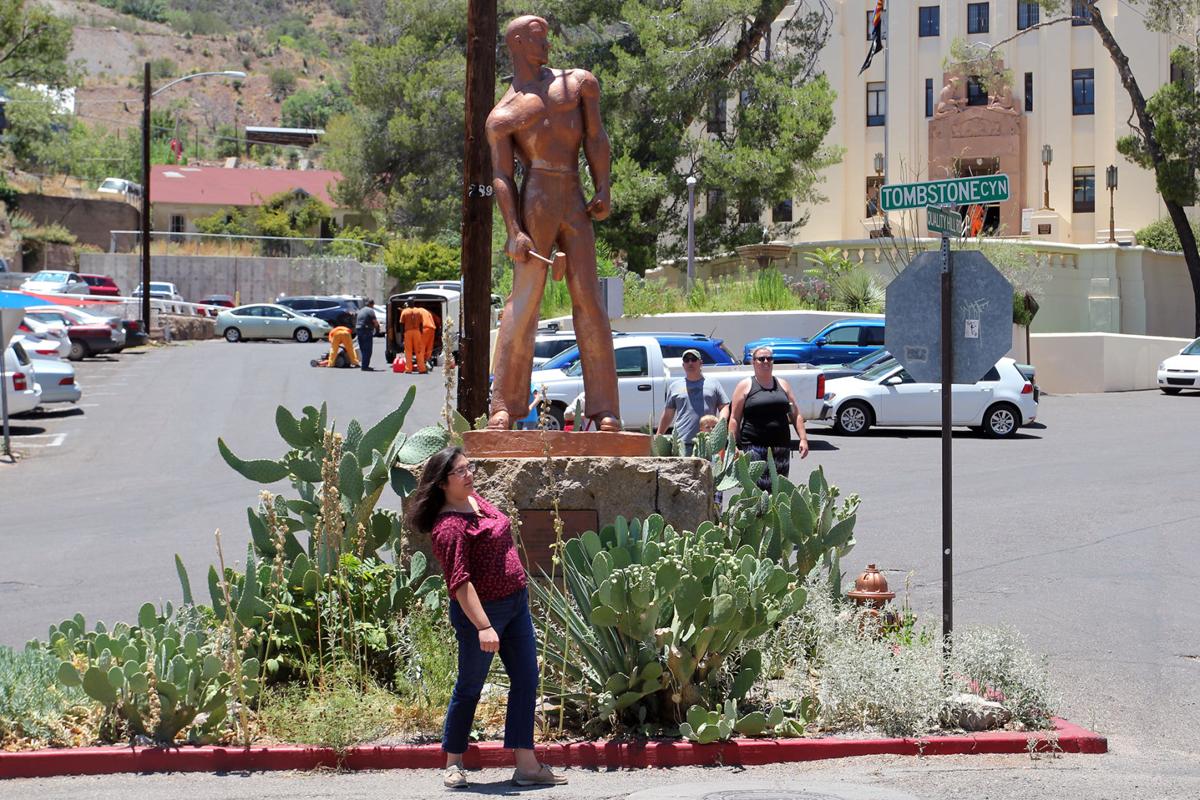 This Is Tucson writer Alicia Vega strikes a pose with the Copper Miner. 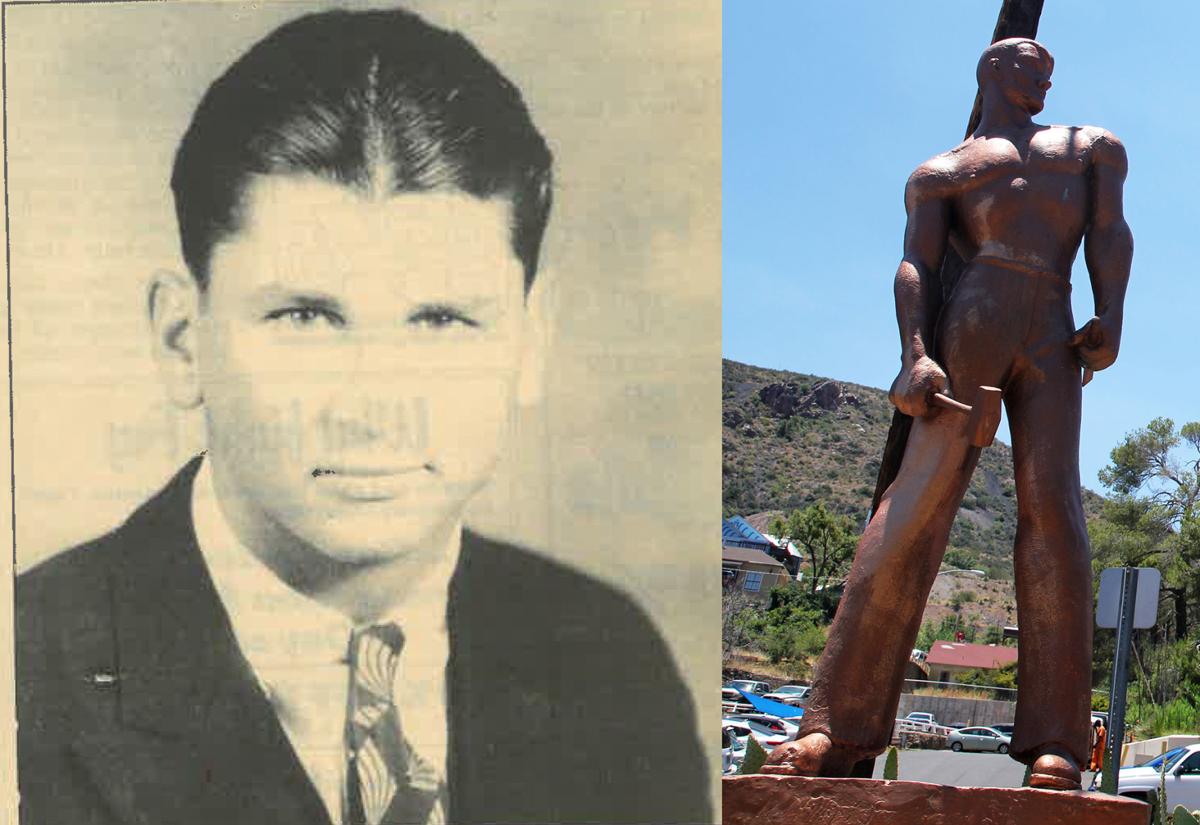 Right: A photo of Lee Petrovitch from the Bisbee Daily Review. Petrovitch was the model for the Copper Miner statue. 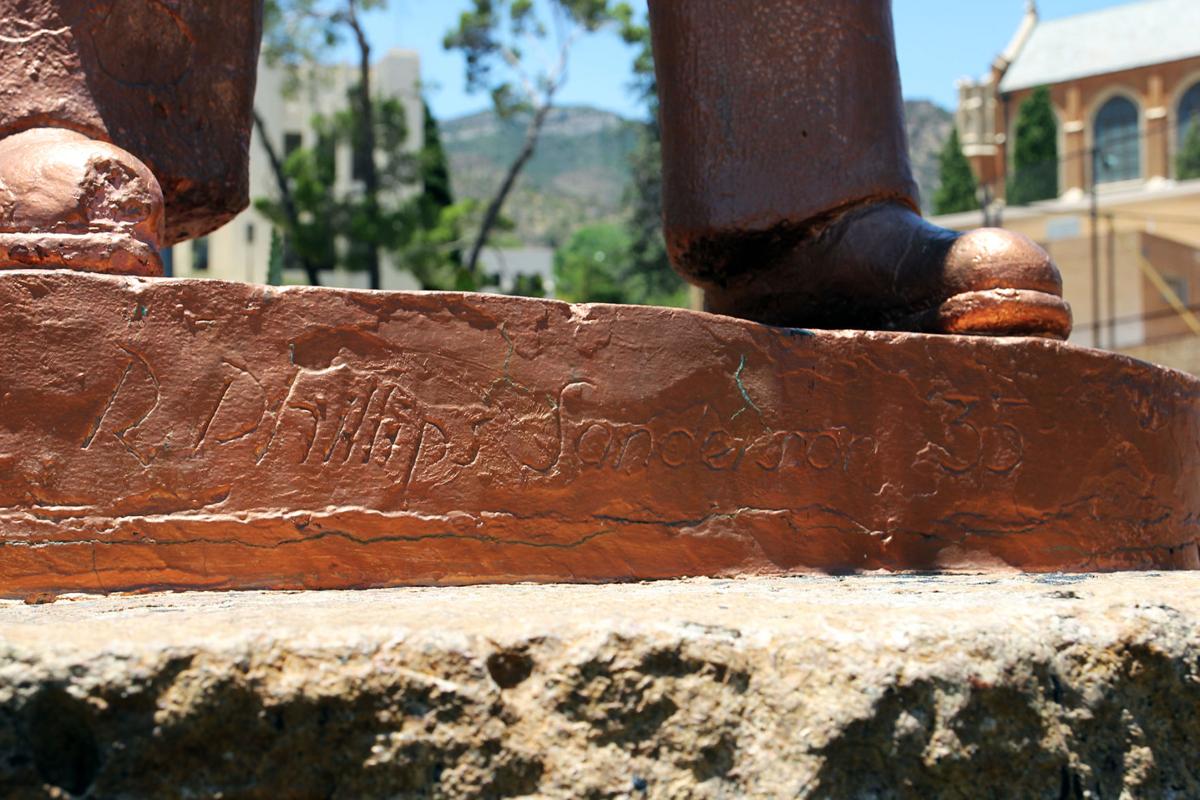 Phillip Sanderson's signature rests at the bottom of the Copper Miner's feet. Sanderson is the artist of the statue. 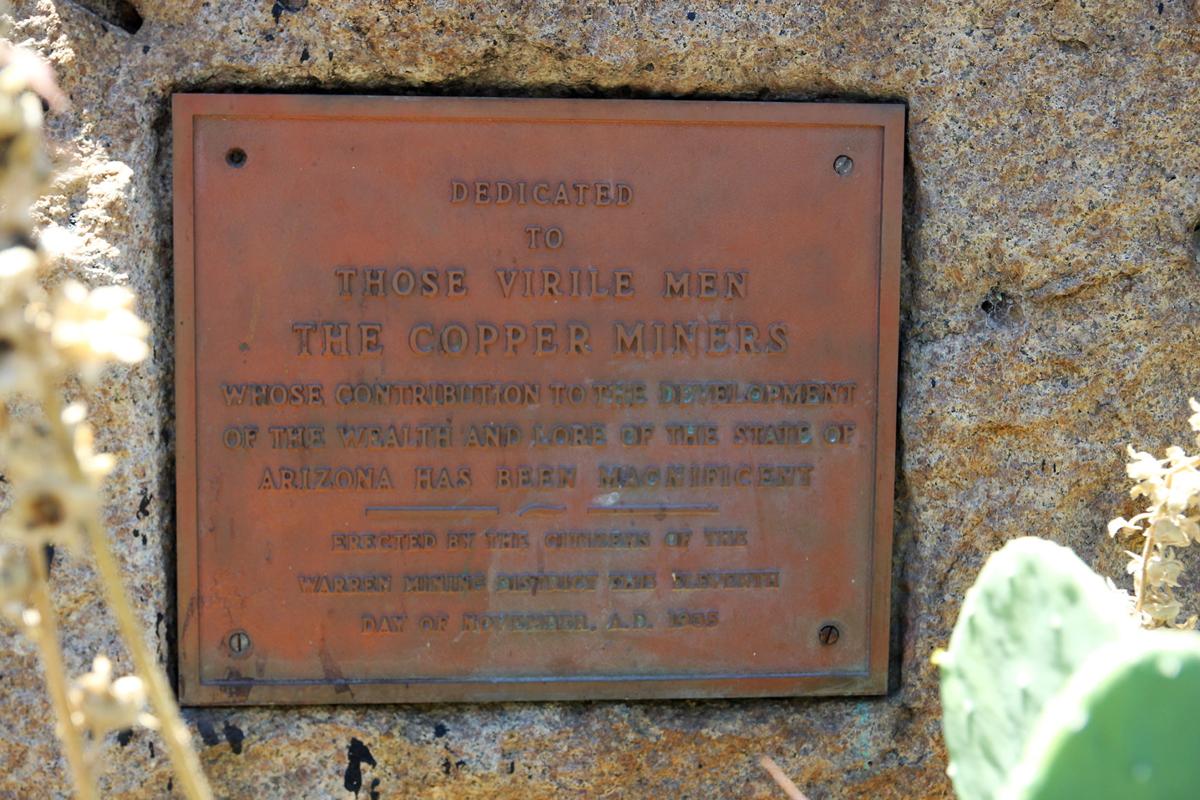 There's a man in Bisbee, Arizona who never ages.

He's the Bisbee Copper Miner, a statue that stands proudly at the bottom of Quality Hill in front of the Superior Court of Cochise County building, where he's watched every sunset fall over the Mule Mountains since 1935.

Lovingly called the "Iron Man" by locals way before Tony Stark made his way into Marvel's superhero universe — the statue was commissioned by the Federal Relief Administration during the Great Depression and created by local artist Phillip Sanderson in the 1930s.

Recently, some of the This Is Tucson team made the trip to Bisbee where we ran into this statuesque longtime resident — but now we have more questions than answers. Who is this miner? Is he made of cooper or iron? And why is he serving us so much attitude? Just look at that power stand.

We hit the Shattuck Memorial Research Library in the Bisbee Mining & Historical Museum and the Cochise County Archives to find out more about the town's MVP — here's what we learned:

Intended to be the symbol for all the contributions miners had made to Arizona at the turn of the century, the Copper Miner stands shirtless in long pants holding a hammer in one hand and a pick in the other. He's also striking a shoulder pose any 90s backup dancer would be proud of.

According to a 1935 article in the Bisbee Daily Review, Sanderson modeled his statue after Bisbee native Lee Petrovitch who was selected by the artist because, "...his finely portioned physique was ideally suited for the undertaking." Which in old timey talk means "this dude is hot AF."

The miner identity is also way more complicated than just the statue. This summer, residents remembered the 100th anniversary of the Bisbee Deportation, during which 1,185 striking miners where rounded up and put on boxcars traveling to New Mexico. (Really the whole story is pretty crazy, read more about it here.)

It took Sanderson two and a half years to complete the statue. He started by creating a two-foot prototype of the Copper Miner before moving on to sculpting the real thing. He used clay from the Phelps Dodge Cooperation, the mining business in town, to form the nine-foot man. It was molded and filled with a special concrete mixture. After the concrete dried, the statue was taken to the outskirts of town where as much as 200 pounds of pure molten copper was sprayed over the surface, wrote Tom Vaughan in a 1984 Review article.

In November 1935, the statue was hoisted onto a bolder and placed in the middle of Tombstone Canyon where it has lived ever since.

During its unveiling Arizona's first U.S. Congresswoman, Isabella Greenway, said this about the statue: "The sun is in his eyes. His brow is winkled. He is stepping forward. This statue will be a great monument to the tireless efforts of your hardy miners who have done so much toward our state."

Since its dedication, the Cooper Miner has lived through 14 U.S presidencies, the closing of the Bisbee mines and the invention of the Snuggie.

Over the years, locals started called the Copper Miner "Iron Man" and it stuck. In a 1980s Review letter to the editor, Vlasta Mihelich wrote the reason why the name changed is because a nearby eatery was once called the Iron Man Restaurant and "people who had come to town at that time supposed it was due to the statue not bothering to read the plaque."

The statue also has plenty of spirit. He has been dressed up as a pirate, football player and greek god — just to name a few. City of Bisbee public works director Andy Haratyk said city workers have to remove bras and underwear from the Iron Man about 10 or 12 times a year.

"We've been very lucky no one has damaged him," Haratyk said. "He is still as strong looking as the day he went up."

Time has also left some parts of the statue in need of repair. In the early 2000s, a conservator was brought in to assess what it would take to return the Copper Miner back to its glory. The grant money the city was hoping to receive to restore the statue never happened, Haratyk said. Now if the Iron Man is looking a little shabby he gets a scrub and a fresh coat of copper paint.

Insider's food guide to Bisbee: 5 spots you need to know

We're going beyond the Breakfast Club here ... No offense to the Wingdinger or the Copper Qu…

Go into Bisbee Soap and Sundry for the free smells, leave with hand-crafted goodness

On Main Street in good Ol' Bisbee, lives a soap store with a sign that says "Free Smells" — not that you need to walk in to smell it, you can smell the Bisbee Soap and Sundry from the Bisbee Grand Hotel.