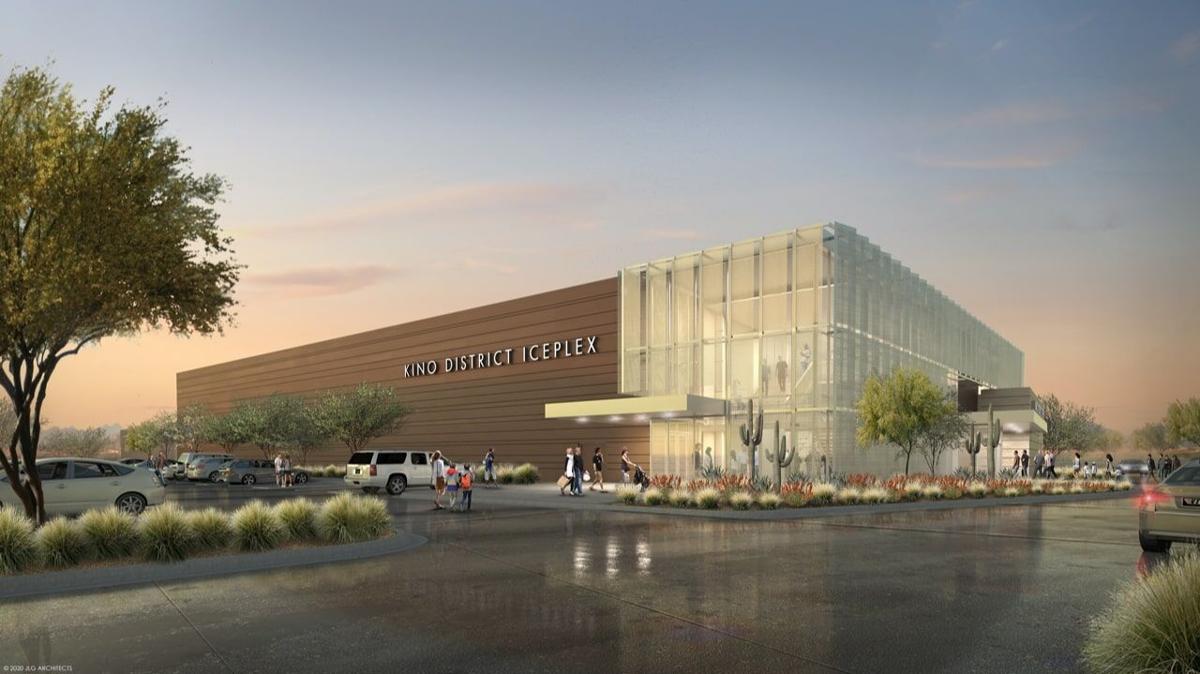 The proposed ice complex could be used for hockey, figure skating and other ice sports. The center would be home to the Tucson Junior Roadrunners youth hockey association, the Kachinas girls’ hockey program, the Little Howlers’ introductory hockey program and the Tucson Adult Hockey League. 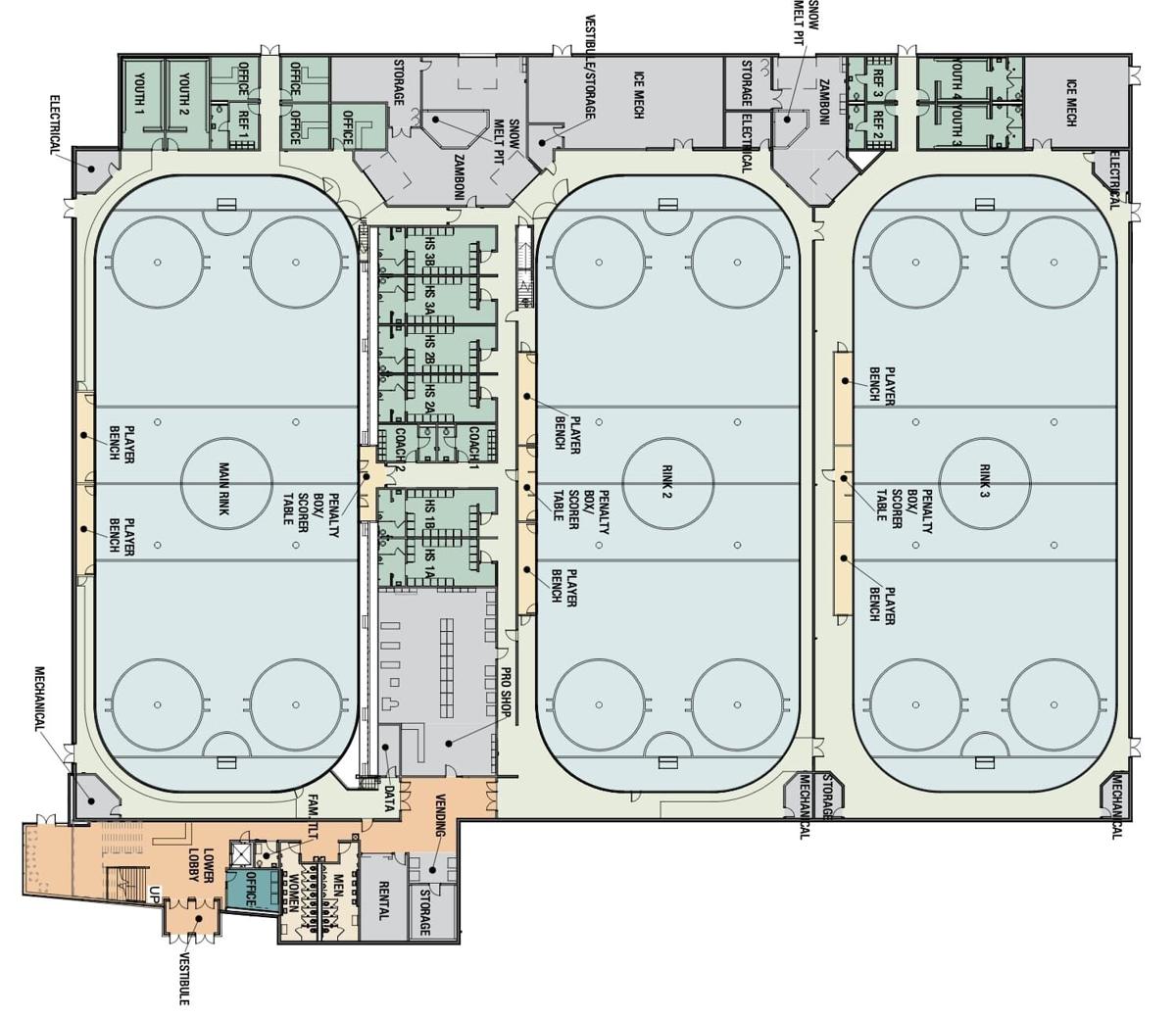 The expansion of the Kino Sports Complex could include three ice rinks within an 86,000-square-foot ice complex.

Pima County’s Kino Sports Complex could soon see the addition of an 86,000-square-foot-ice complex and one of Tucson’s largest indoor sports facilities.

The Pima County Board of Supervisors took the first step in the potential expansion of the sports complex Tuesday, April 20 by voting 4-1 to enter into a $1.8 million predevelopment services agreement with a firm to begin laying out the schematic design and financial analysis of construction.

The proposal also includes a 130,000-square-foot field house with eight full-sized basketball courts that can be converted into 16 volleyball courts and eight indoor lacrosse surfaces.

Knott Development will come to the board with a refined plan for construction in July. If the board approves the master developer partnership agreement, the firm would begin solidifying contracts and create a comprehensive business plan to begin construction of the expansion as soon as August 2023.

The move continues the county’s ongoing sponsoring of the Kino Sports Complex, which has totaled more than $100 million in investments within the last two decades.

The most recent $31 million expansion project to the complex completed in January 2020 added 20 pickleball courts and 12 lighted outdoor fields south of Interstate 10.

The continuation of the Kino Sports and Entertainment Complex project would be constructed in the vacant 80-acre lot west of the latest expansion.

The developer is considering adding an underpass to I-10 to connect the entertainment complex with Kino’s north and south complexes.

Only Supervisor Steve Christy voted against the approval, arguing the project should be constructed solely within the private sector and avoid using taxpayer dollars.

According to Carmine DeBonis, deputy county administrator, the construction of the proposed amenities would be privately financed with no reliance on taxpayer funds. That decision will be finalized when the board receives the master developer partnership agreement.

Supervisor Rex Scott showed adamant support for the item, saying it has received an outpouring of support from his constituents.

“I haven’t gotten anything that has engendered so much passionate response and support for anything that we’ve talked about since January as this complex, especially the iceplex,” he said.

Board members received comments from family members of participants in the Tucson Junior Roadrunners youth hockey program. The proposed ice complex would be the group’s new home base.

Because of a lack of ice space in Tucson, hockey families expressed the challenges of making frequent treks up I-10 to use ice rinks in the Phoenix area. They say adding a large hockey rink in Tucson would mitigate these challenges while bringing the city up to par with other metropolitan areas in the state that are meeting the growing demand for hockey programs across the Southwest.

Jeremy Bow, president of the Tucson Junior Roadrunners Youth Hockey Association, told the board that while youth hockey in Pima County was a “niche community” 10 years ago, his organization has grown by 325% within the last five years.

“That anonymous youth hockey club from a decade ago is in the rearview mirror and our future could be very bright in the hands of Pima County and Knott Development,” he wrote.

The supervisors’ vote approves only nascent phases of development, however.

If the board approves the master developer partnership agreement with Knott Development in July, another phase of predevelopment work would begin that could last up to 12 months.

After that phase, the board would then have to vote to give the go-ahead to begin constructing the Kino complex expansion.

Use the This Is Tucson Tucson and Southern Arizona summer camp guide to search for in-person or virtual summer camps in by age, topic, location and cost.

The owner of Cactus Carpool Cinema plans to put on live events and a wider range of movies at the new location.

City Manager Michael Ortega is recommending the Tucson City Council vote for northwest expansion of the Reid Park Zoo. The expansion would still take up park space, but would preserve Barnum Hill and the southern duck pond.

Nicole joined the Star in 2021. She earned her bachelor’s degree in journalism at ASU’s Cronkite school in 2020 and has won awards from the Society of Professional Journalists, AC Press and Arizona Press Club.