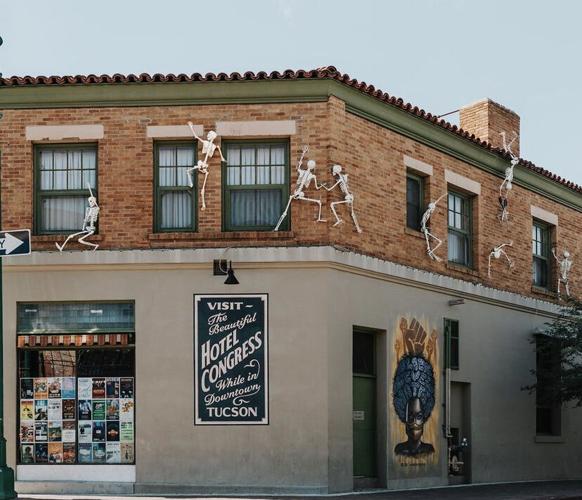 The exterior of Hotel Congress is currently decorated with skeletons. 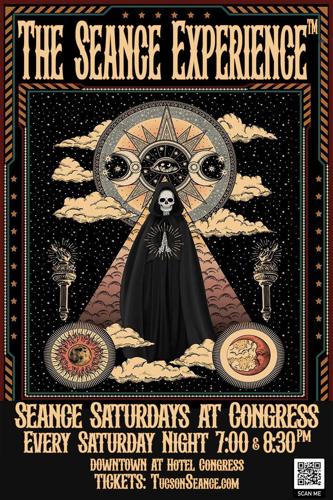 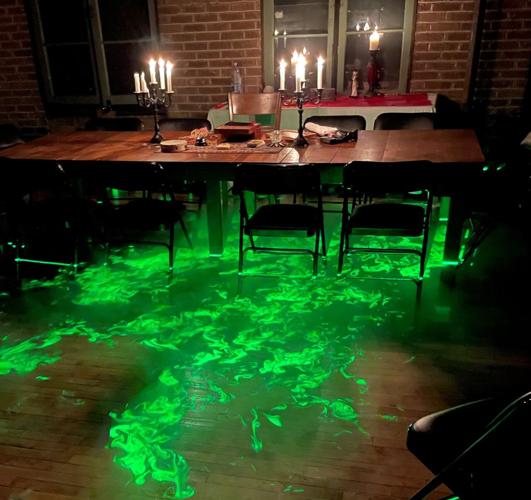 A peek inside the Hotel Congress Séance Experience. 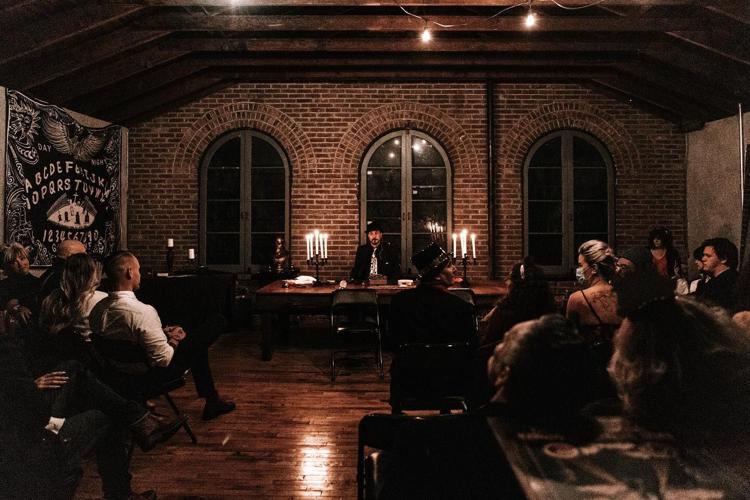 A photo of a previous Hotel Congress Séance Experience that Ross Horwitz has conducted.

In honor of the spooky season, we sent the two biggest scaredy cats on our team, reporter Elvia Verdugo and editor Gloria Knott, to witness and participate in the Hotel Congress Séance Experience. The séances run every weekend until the end of October at Hotel Congress. Experiences may vary, but this is ours:

As we make our way to the third floor of Hotel Congress, we’re greeted by a slightly burnt scent on the second floor and a sign stuck to the third-floor door that says “No public admittance.”

After making the trek up three flights of stairs, we’re guided into the nearly pitch-black room with a large wooden table that’s adorned with the traditional items of a séance: candelabras, an Ouija board and other objects like a spiritual trigger item, bells, handheld chalkboards and tarot cards.

The un-air-conditioned room fills with heat and anxiety so thick you could cut it with a knife (it was probably just the anxiety of us two, honestly) as small groups of mostly strangers trickle into the room hoping to meet another type of stranger — the spiritual kind, who has an eternal tie to the historic hotel.

We all take a seat at the long wooden table and are introduced to our “spirit guide séance master” Ross Horwitz, who has a background in paranormal phenomena including conducting paranormal research at the University of Arizona.

Horwitz begins to give a brief history of the room we’re in and its spiritual significance. This room on the third floor of Hotel Congress is the only one that survived the hotel's 1934 fire — the same blaze that eventually led to the capture of infamous criminal John Dillinger.

This room is where Horwitz and his team put on an “authentic live re-creation of a Victorian era dark theatrical séance exactly as performed in the 1800s,” according to the Tucson Séance Experience’s website.

Before we officially start the séance, Horwitz tells us about the one rule that we have to follow: don’t break the circle.

The circle he’s referring to is the makeshift circle the participants have made by placing one hand on the historical table, and the other around the wrist of their neighbor.

This séance experience features a mid-1800s electromagnetic therapy machine that helps emit electromagnetic energy into our environment, which helps possible spirits channel that energy to come into contact with the living world.

The machine sits in a small wooden box and comes with two metal rods that Horwitz holds in each of his hands to help transfer energy to the other participants. With each crank of the electromagnetic machine, the experience begins to intensify.

Most participants, including us, felt a tingling sensation in our fingers and hands. At some points, the feeling was so intense that it felt like our hands had completely fallen asleep.

Horwitz then begins to summon a specific spirit from room 242 — supposedly the most haunted room in the entire hotel due to the multiple deaths that are said to have occurred there.

To complete the séance in true Victorian-era fashion, Horwitz blows out the flames from the candles, leaving us in absolute darkness and almost complete silence except for the unavoidable sounds of the hustle and bustle below us on Congress Street and the summoning of the spirit from room 242.

Horwitz guides us into a deep breathing pattern to help keep everyone calm and allow us to channel all of our energy toward summoning a spirit.

As the participants breathe in unison, unusual things begin to happen at the table and across the room. Something so gentle grazes the tops of our hands — similar to the feeling of a feather duster or a cat toy.

We also feel a puff of cold air that comes and goes across our hands on the table.

Aside from our heavy breathing, we hear the sounds of writing on a chalkboard, loud bangs on each end of the table and the ringing of a bell.

Horwitz relights the candles and bids adieu to any possible spirits that may be lingering in the room.

We immediately notice that things have been moved around on the table. The spiritual trigger item — a patterned scarf — is flung to one side of the table and the chalkboards have illegible scribbles sprawled across them.

We all regroup and discuss what we experienced during the séance, many of whom experienced the same types of phenomena.

Others reportedly felt the presence of someone standing behind them or saw a bright orb in the corner of the room.

Toward the end of the séance, the participants were eager to complete a second mini séance to try to unravel the mystery behind the scribbles on the chalkboard. This time, the séance was done in full candlelight so we could see what was happening in front of us — or at least we thought so.

During the second séance, bells were ringing despite no one touching them, and we discovered that more scribbles had been made on the small chalkboards,  even though we didn't hear any scratching on the boards.

But unlike last time, we could actually make out the words on the chalkboard and it was clear that one of the spirits of Hotel Congress had a final message for us before we all went our separate ways.

So, what did it say?

Well, we don’t want to spoil the ending and ruin the magic! You’ll have to find out for yourself and see what kind of séance experience you have at Hotel Congress.

When: Various days in October.

A Barbie truck is coming to Tucson this weekend. Here's where to snag retro merch. ✨

The Malibu Barbie Truck Tour is stopping by La Encantada in Tucson, Arizona on Saturday, Oct. 22. The tour will bring exclusive retro Barbie merch that you can only find at this event!

Where to find the perfect pumpkin in Tucson this fall

A Chinese-Mexican food symbol: How this festival is honoring Chinese chorizo

The Tucson Chinese Chorizo Project is more than a food festival at eateries across the city. It's a journey of unearthing Chinese chorizo, a "food symbol of Chinese and Mexican immigrant solidarity."

Starting Oct. 6, Halloween attraction Nightfall, at Old Tucson, will reopen to the public every Thursday through Sunday until Oct. 30.

From farm to city: A new lavender shop just opened in Tucson

Life Under the Oaks Lavender Farm in Oracle, Arizona, is bringing a piece of the farm to Tucson with a new shop that opened on Historic Fourth Avenue this week. Find locally-grown fresh lavender and lavender-infused products at The Lavender Manor.

This family transforms their garage into a haunted house on Halloween 👻

Last year, some 300 people waited in line to walk through the haunted house the Golembiewski family puts together for Halloween on Tucson's east side.

What to do in Tucson, Arizona this weekend: All Souls Procession, TENWEST street fest, floating lanterns, Tucson Celtic Festival, Bad Bunny party, and MORE in the Tucson, Marana and Oro Valley areas.