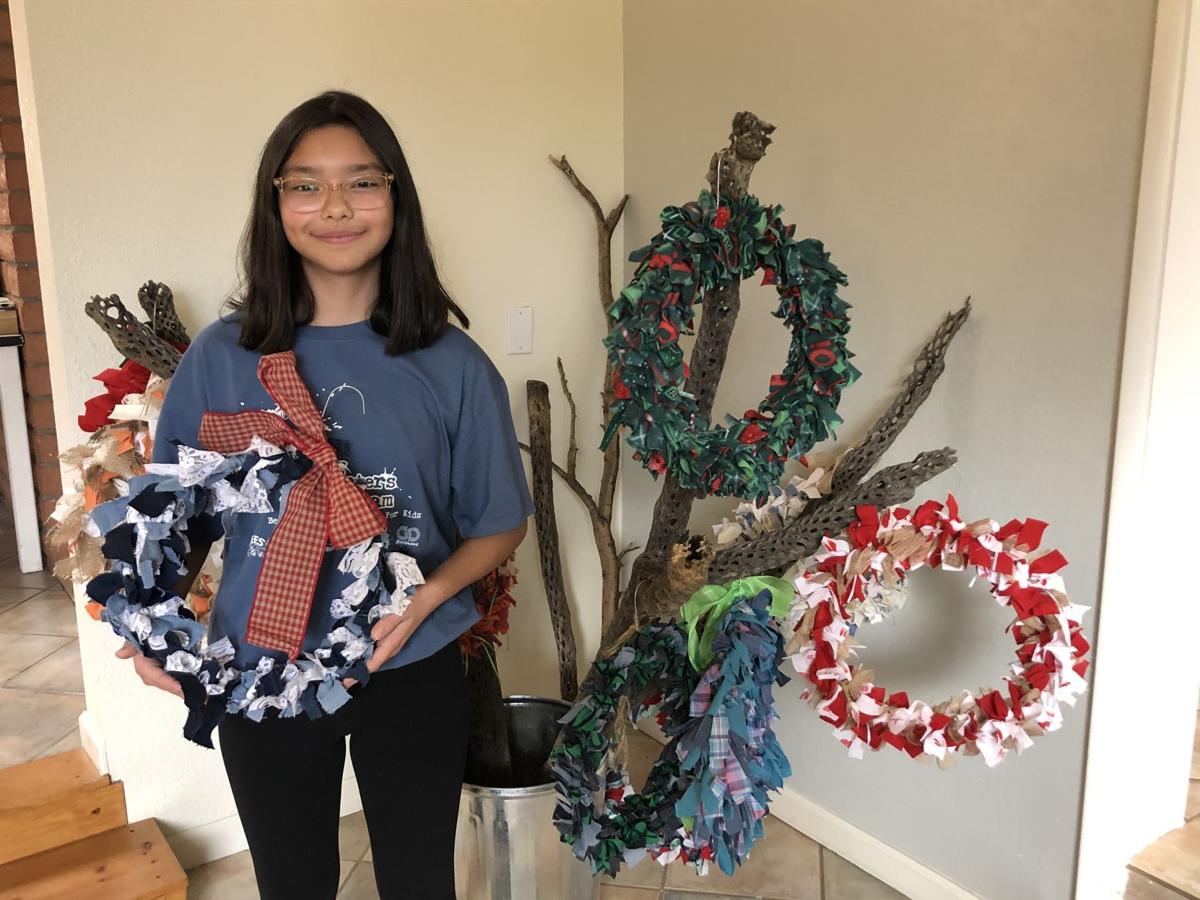 Camilla Castro, 13, is one of the kid entrepreneurs who will be selling her creations at the Acton Children's Business Fair on December 15. 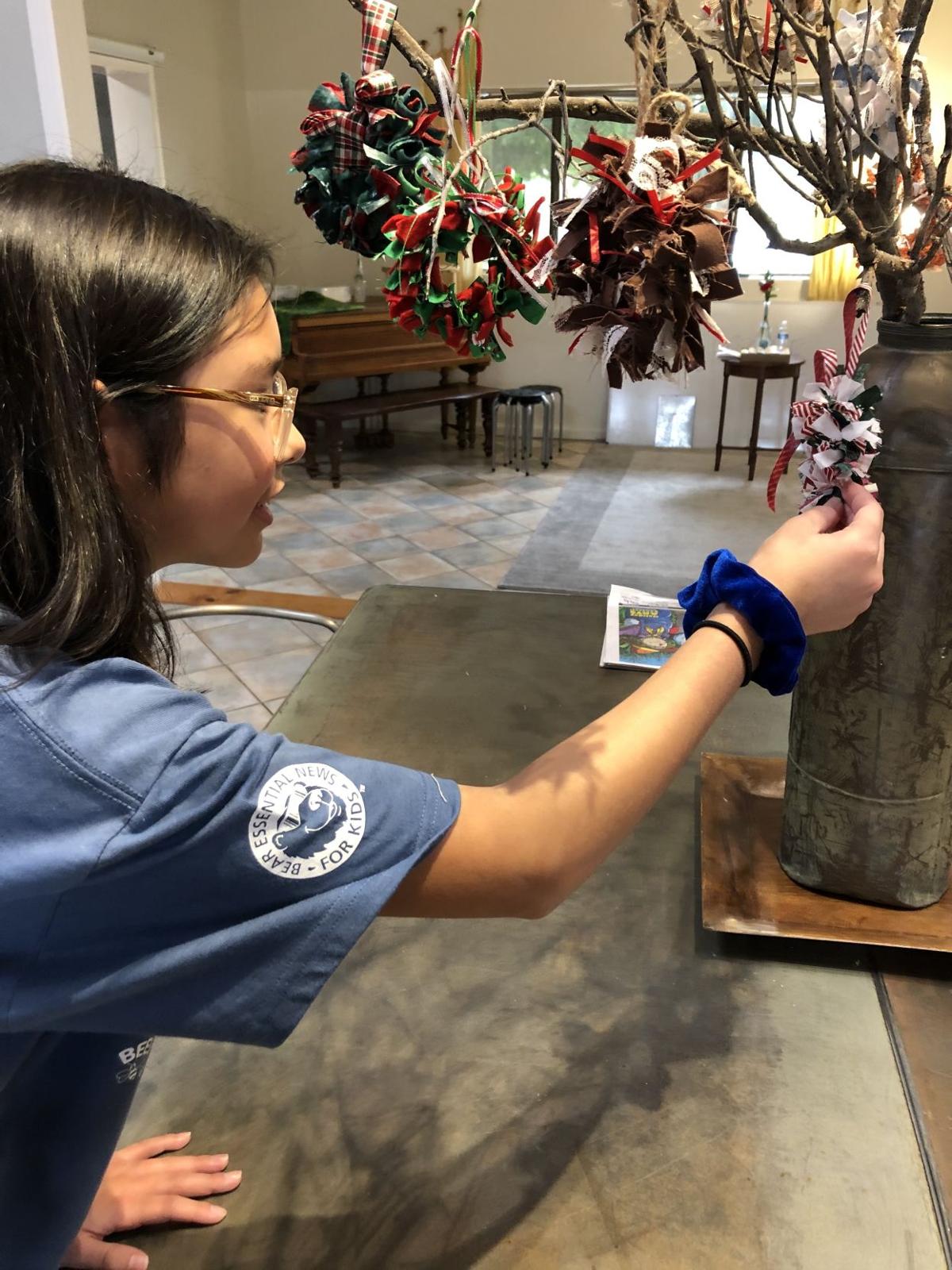 Camilla Castro explains the different fabrics she uses to create the wreaths for her company Anthology Gifts.

Tucson's youngest entrepreneurs will soon have the chance to showcase their creations and talents, practice their sales skills, and earn a little cash before the holidays at an upcoming fair that's dedicated solely to kid-run businesses.

The Acton Children's Business Fair is a concept that originated from the founders of Acton Academy, a network of private charter schools across the country, and is meant to give kids the chance to learn about and practice entrepreneurship.

The academy is run by Mara Castro and her husband Francisco, who also operate the nearby preschool Mis Manos Montessori School.

Kids between the ages of 6 and 16 can sign up for a booth at the fair, and are responsible for coming up with their own for products or services, setting their prices, making their own signs for their booths, and developing a plan for how they will pay for start up costs. Participation in the event is free, and kids keep all money from their sales.

There are 25 spots available for the fair and so far 15 of those have been filled, Mara Castro says. Kids from different schools throughout Tucson have signed up and some of the ideas so far are nail painting, watercolor art, bead art, baking, and books written by kids, she says.

The deadline to register for a spot is Dec. 1 and the registration form can be found here.

Mara Castro's daughter, Camilla Castro, who is the only student at TIA so far, is one of the kidpreneurs who will be selling her creations at the event.

The 13-year-old has spent the last few weeks in her school lessons learning about how to be an entrepreneur and the sales process, and is eager to apply what she's learned at the fair.

Together with a friend, Camilla will be selling handmade wreaths made from various fabrics — pajamas, old t-shirts and pants, lace and felt that she sourced from her family's closets, Goodwill, and donations from friends.

"I wanted to make something that didn’t harm the environment," Camilla says. "So by reusing clothes I’m not buying new clothes that are made in factories that are polluting the earth. And I’m making good use of them."

Camilla is still working on her business logo, but chose a name that references the many memories held in each piece of clothing or material she uses.

"My company name is Anthology Gifts," she says. "An anthology is a collection of stories, which this is. My wreaths hold a bunch of stories from other people, so I felt that was a good name for it."

Camilla's wreaths come in two sizes and she works on them on weekends and on Tuesdays and Thursdays while watching her family's favorite TV shows. She can make one large wreath, or up to four small ones in the hour it takes to watch an episode of "This is Us" or "A Million Little Things."

This isn't the the first time the eighth-grader has dabbled in business. In second grade she ran a lemonade and cookie stand in her neighborhood and in fourth grade she melted crayons into heart shapes and sold those to people at her school. But she found her greatest success in her sixth grade slime business.

"It was so popular, so I knew a bunch of kids would want to buy it from me. I even accepted custom orders and then later formed a tiny business with friends who also liked making slime," she says. "We'd have business meetings at my house, but we'd really just play outside."

She says she made a lot of money with that venture, but lost it.

"I got really sad. All that hard work for nothing," she says.

She's been thinking through her plans for the money she earns from her sales at the Children's Business Fair. They include paying back her parents for money loaned to her for supplies, and paying her business partner. If any money is left she wants to donate it to a yet-to-be-determined organization.

In addition to the vendor booths, the Tucson Girl's Chorus will also perform at the event and will sell food to raise money for their organization.

Where: Tucson Ingenuity Academy, 4010 W. Palo Seco. The property is down a small dirt road off Thornydale Road north of Linda Vista Boulevard. Look for directional signs for the event and parking.

More info: Go here for additional information and to sign up for a booth. Booth space is limited and reservations are due by Dec. 1.

A fun list of things to do this weekend in Tucson, Oro Valley, and Marana. Check out El Tour…

Santa Claus and his trusty helper Migs McJingles the Elf have teamed up again this year with Tucson Parks and Recreation to bring bring some of the North Pole magic to the Sonoran Desert through the "Santa's Calling" program.

While we can't plan your Thanksgiving menu, or help with all those last minute house chores, we can help you with a few family-friendly places to take your out of town guests.

"It’s like a weird Venn diagram, where she’s good at what I’m not good at and vice versa. But then we have overlap where we just get along," says Wilson who co-owns Thistle, a flower shop that opened over the summer in the former La Buena restaurant building on East 22nd at South Fourth Avenue, with Victoria Martino.

Here's your annual reminder that winter break is quickly approaching. And, for working parents or families looking for fun ways to keep their kids active during their time off from school, it's time to start making plans to fill those days.

10 gift experiences for kids that will create priceless memories, not clutter

Gifts like music lessons or parent-kid dates create treasured memories and skills that children will hang onto forever. Museum memberships or subscription boxes give them something to look forward to all year.