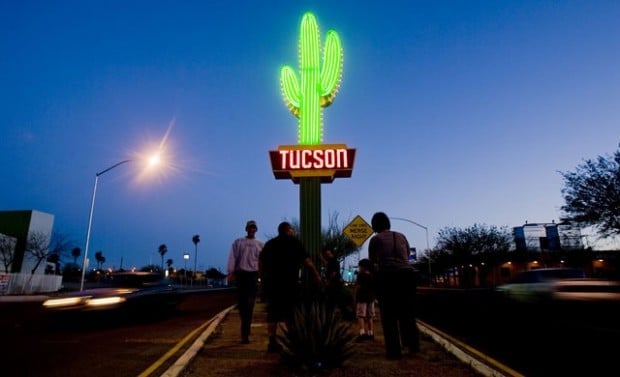 The 30-ft-tall neon public art piece, by local artist Dirk J. Arnold, shows people traveling northbound on Oracle the history of the roadway, and if they are traveling southbound it welcomes them to Tucson. 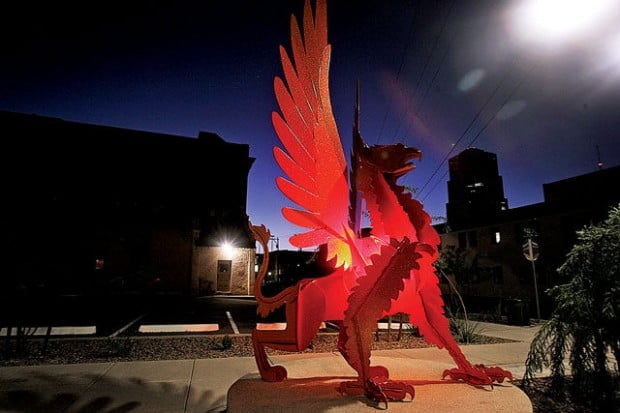 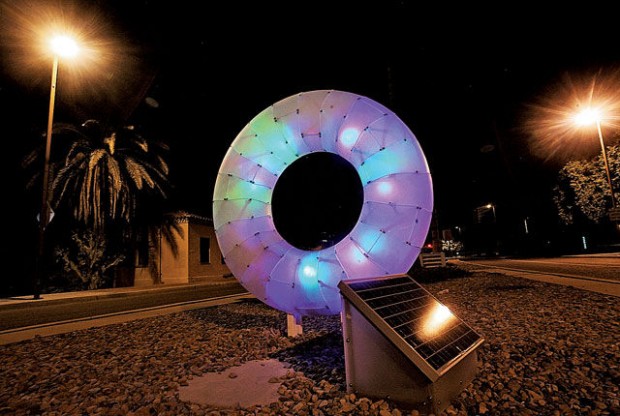 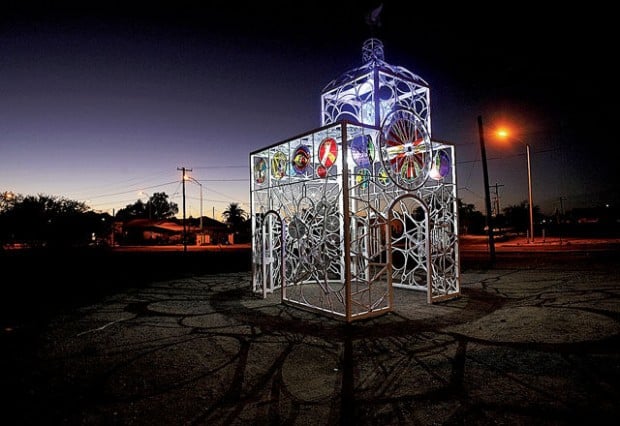 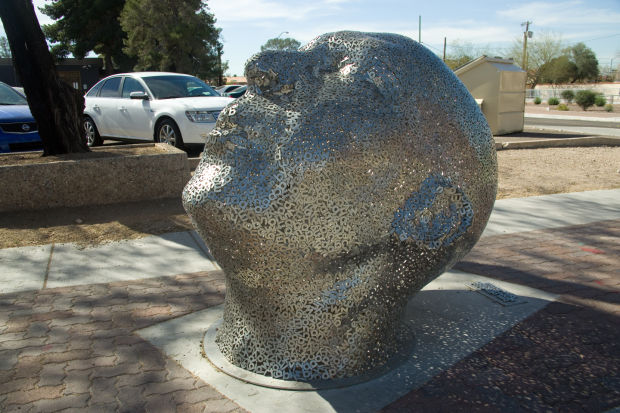 "Poet," by Simon Donovan and Ben Olmstead, East Helen Street and North Warren Avenue. Public art along the route for the Modern Streetcar at Helen and Warren in Tucson, Ariz. Photo by Martha Lochert 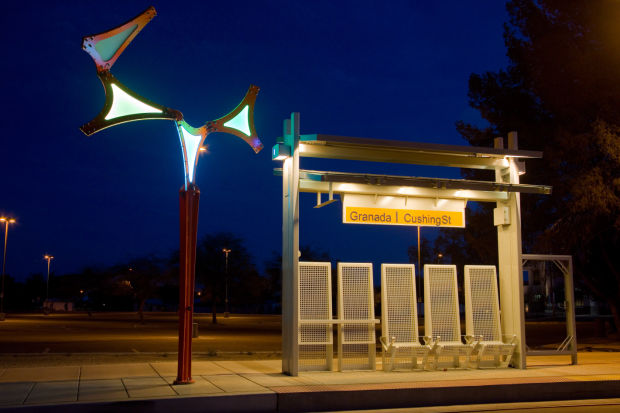 "Wandering Stars" by Joe O'Connell and Blessing Hancock, West Cushing Street and South Granada Avenue. The stars light up when a button on a pole is pushed. Public art along the route for the Modern Streetcar at Cushing and Granada in Tucson, Ariz. Photo by Martha Lochert 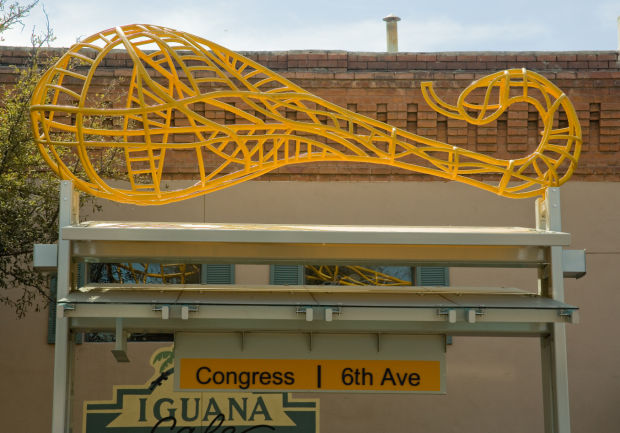 "Calabashes," by Eric Powell, Broadway at East Congress Street and at South Sixth Avenue. Public art along the route for the Modern Streetcar at Congress and 6th Ave. in Tucson, Ariz. Photo by Martha Lochert 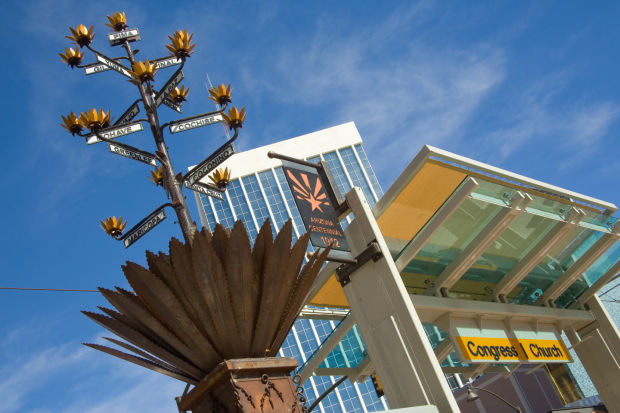 "Untitled" by Joe Tyler, North Church Avenue at West Congress Street. The yucca has 100 leaves, one for each year of Arizona's statehood, the stalk lists the names of the state's 15 counties. Public art along the route for the Modern Streetcar at Broadway and Congress in Tucson, Ariz. Photo by Martha Lochert 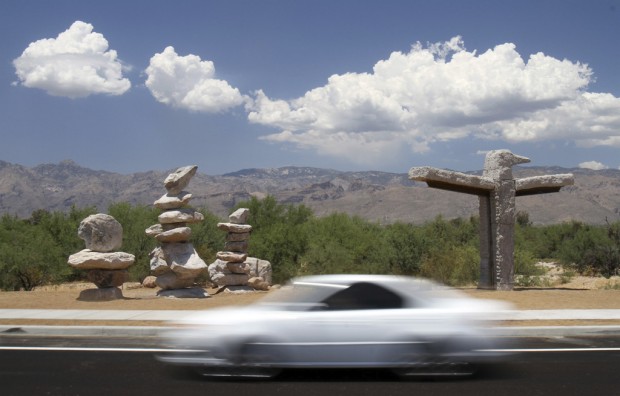 Sculptures take over the north side of Speedway, west of Houghton: Rock stacks resembling cairns used to mark hiking trails were created by artist Simon Donovan and stone carver Will Chamberlain, and the "Messenger," which depicts a raven with a 19-foot wingspan, is a creation by artist Caryl Clement. 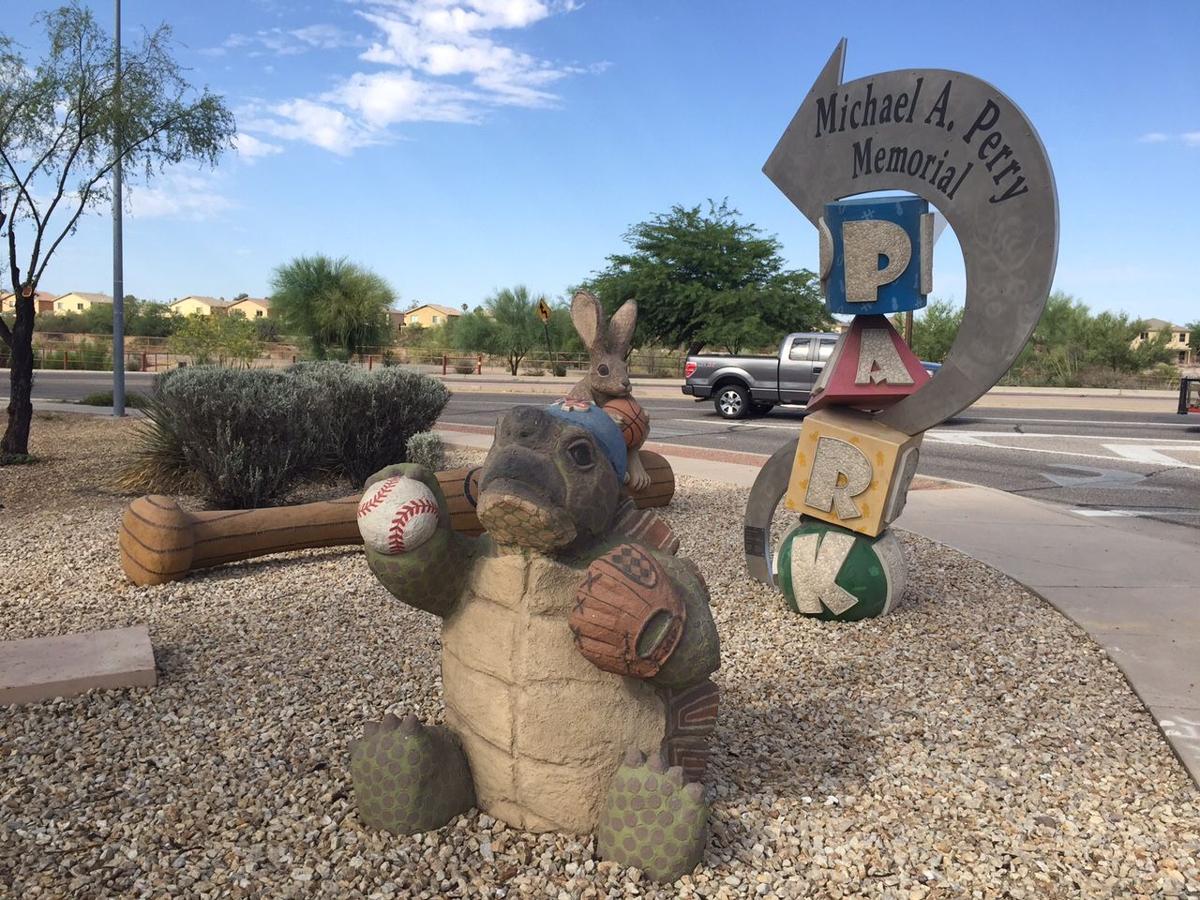 Michael A. Perry Memorial Park statues — The oversized bunny on a bat and a turtle with a mitt and baseball at the corner of East Golf Links Road and South Pantano Parkway look like playful public art — and they are — but they’re meant to be a more visible marker for the park, which is tucked back off those roads and named for a 12-year-old boy who was murdered in 1984. 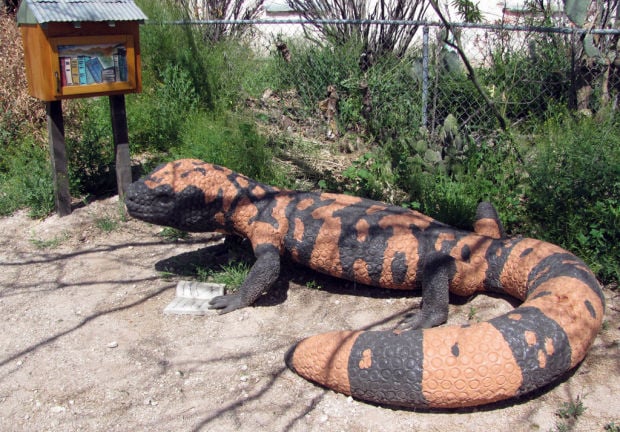 The huge Gila monster sculpture includes a literary device - the lizard is reading a book. The art is in the Dunbar Spring Neighborhood. 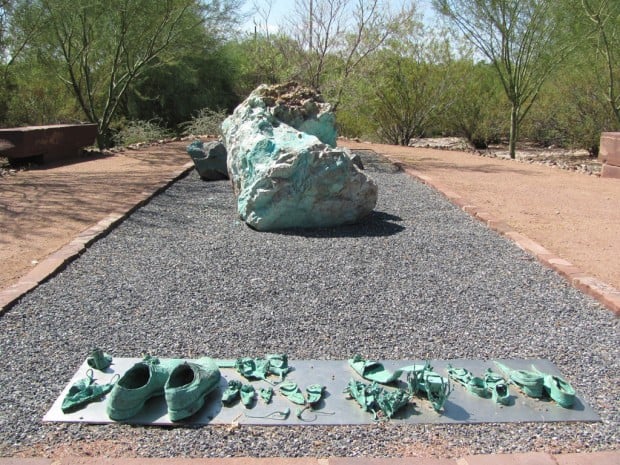 "Midsummer Night's Dream" artwork decorates a pebble garden at George Mehl Foothills Park. The bronze shoes of people and fairies are "left behind" as visitors escape the real world for a little while. 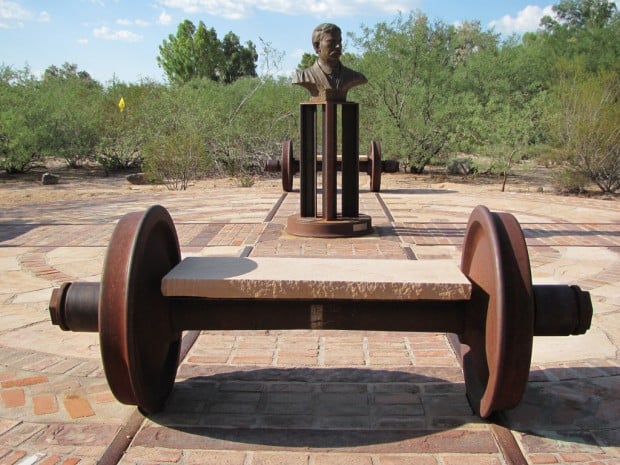 The Epes Randolph Plaza near Hi Corbett Field honors a man who was instrumental in rail development here. 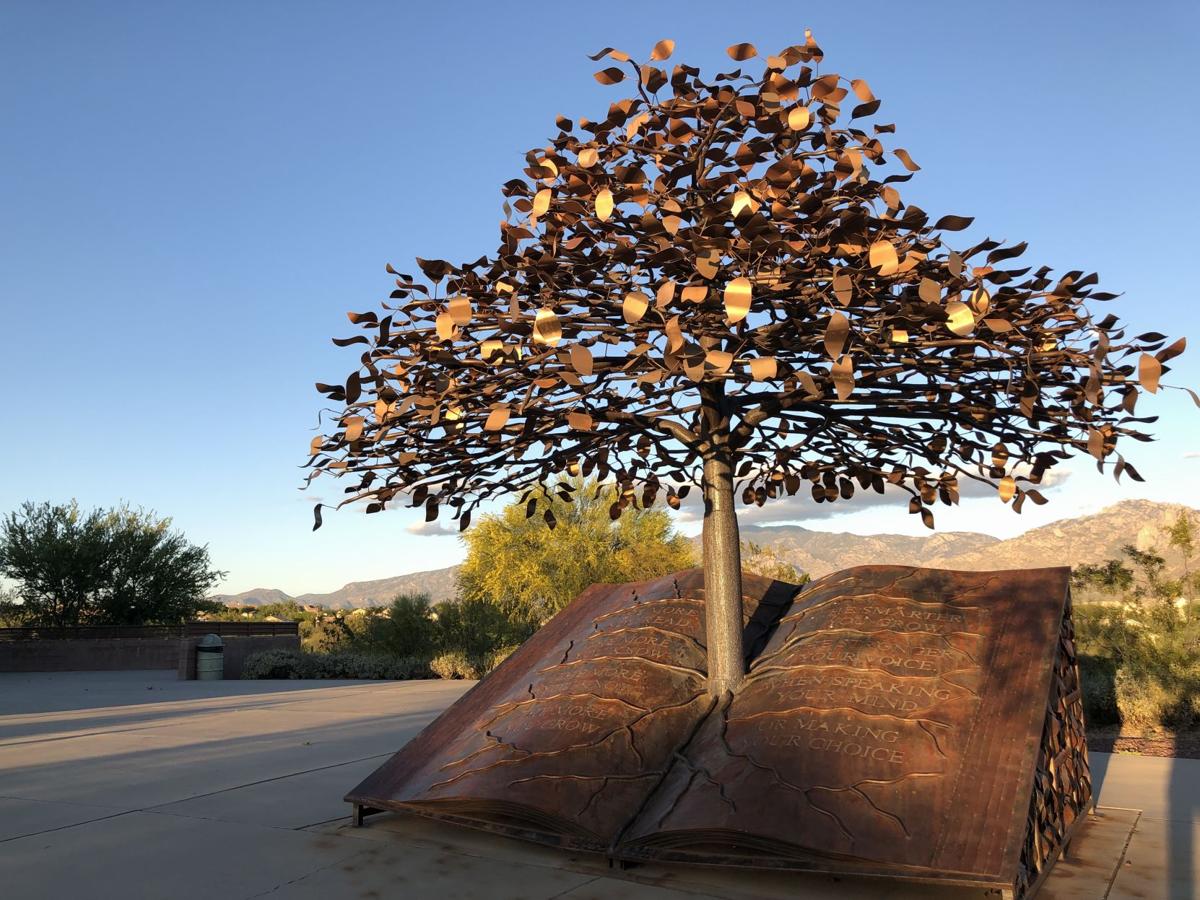 The Learning Tree by Joe A. Tyler 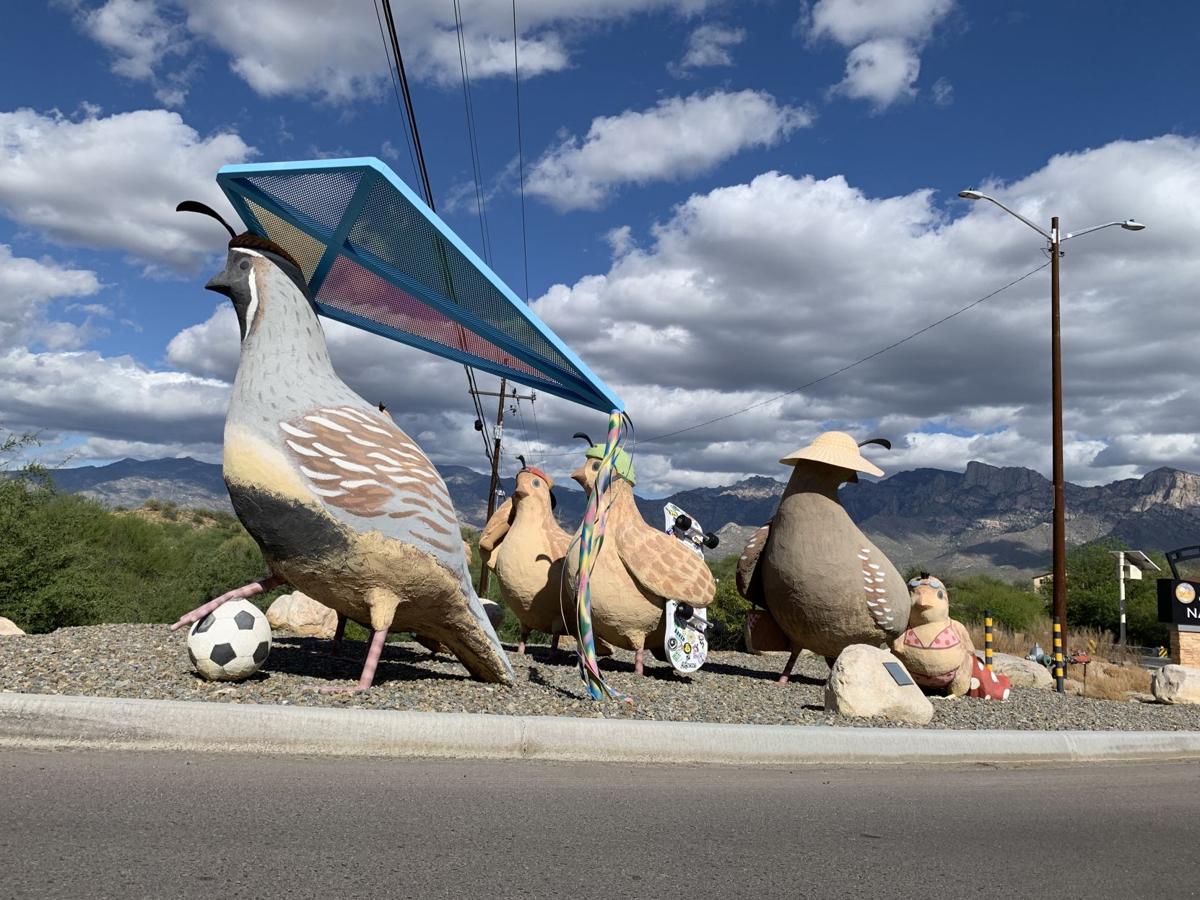 A family of playful quail spend a day at Naranja Park. Artwork was done by a team of student artists led by Hirotsune Tashima and Jason E. Butler. 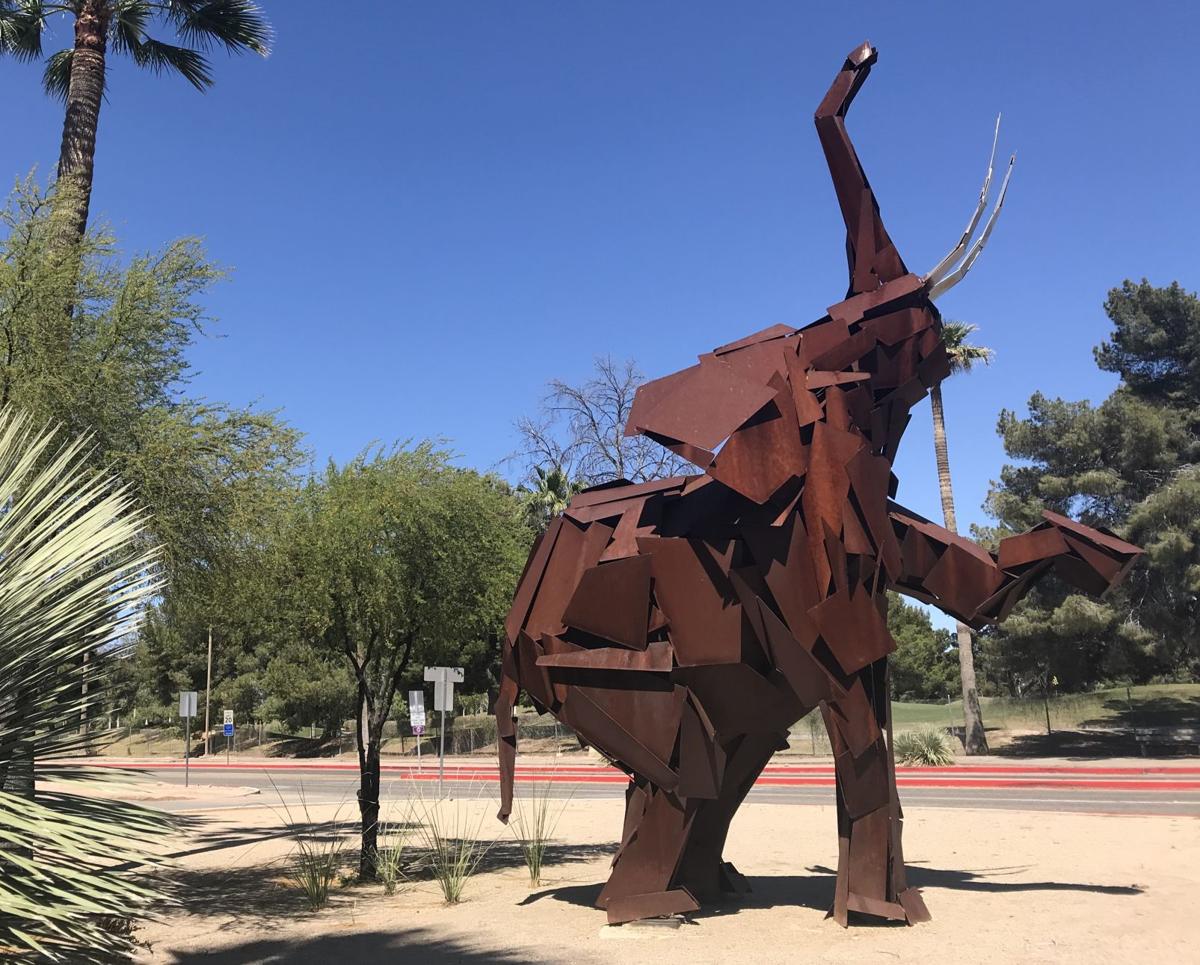 Loxodonta Africana sits on the corner of 22nd Street and Randolph Way to let you know the zoo is nearby. 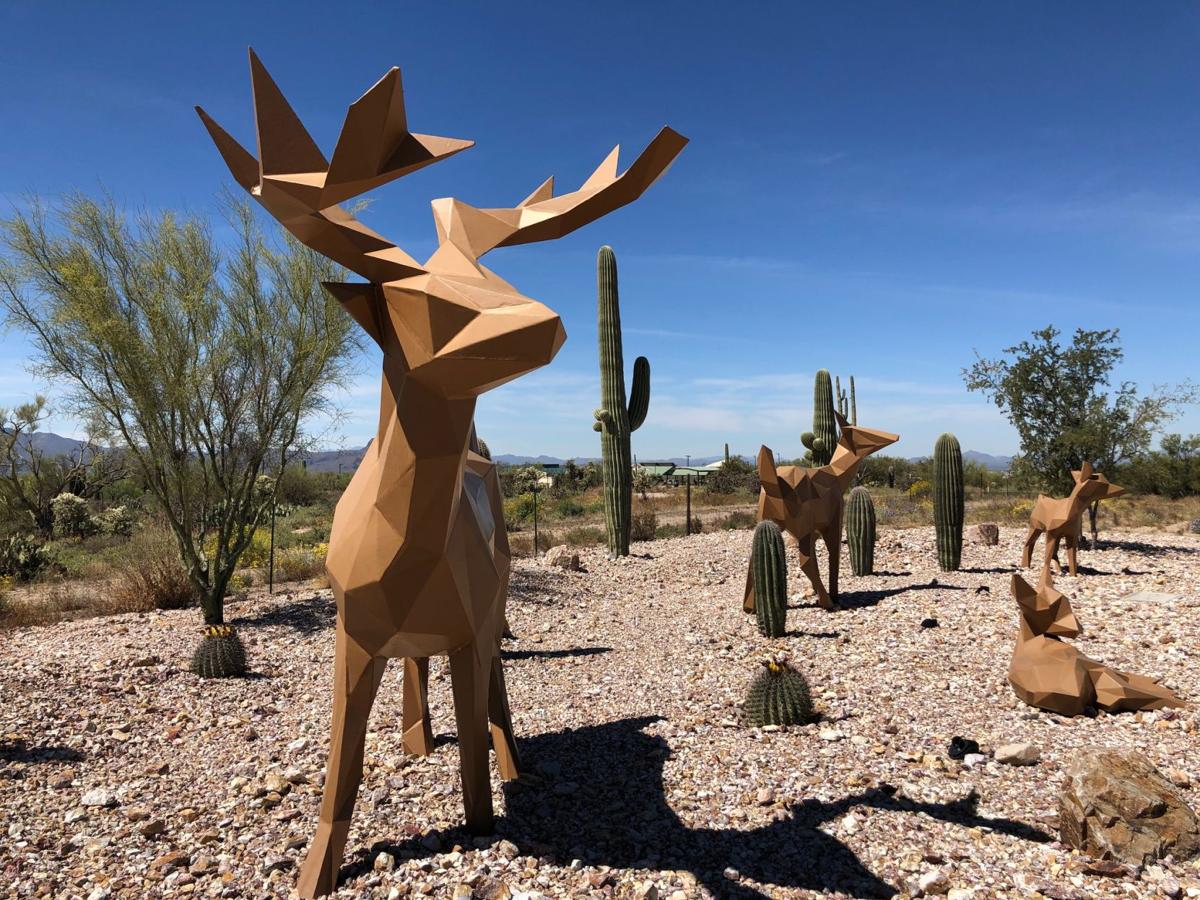 A family of deer sculptures bask in the sun at Tangerine Sky Park.

You can see it in the people you meet, the many art markets and events and the compelling public art pieces throughout the city.

We're here to take you on a virtual tour of some of Tucson's public art. This is just a sampling of the many pieces you'll see driving or walking around, so use this as a jumping off point to make your own tour.

Do you have a favorite we haven't added to the list yet? Email us at thisistucson@tucson.com or DM us on Instagram — @this_is_tucson

This cool sculpture has lights in its rib cage which turn on when the streetlights turn on. It represents the griffins that were perched on the Carnegie Library overlooking Scott Avenue before they were removed for the building's 1983 renovation.

It was created by Joe O'Connell, Ty Augsburger, Eric Gustafson and Ezequiel Leoni.

Where: It's downtown, on South Scott Avenue across from the Children's Museum Tucson

These sculptures were inspired by the calabash — or gourd, which were used to carry water in this area, and represent the people of Tucson who are hardy, adaptable and thrive in the Sonoran Desert, just like the calabash.

Where: Downtown, Sixth Avenue at East Broadway and at East Congress Street. The gourds are companion pieces at these two stops, a block separating the two.

This sculpture is the head of a local poet made of thousands of stainless steel letters. It lights up blue from within. The poet looks like they're blowing letters into the back of an electronic scrolling reader board that transmits fresh poetry from the UA Poetry Center to the streetcar stops. It was created by Simon Donovan and Ben Olmstead.

Where: Modern Streetcar Stop at Helen Street and Warren Avenue.

Joe O'Connell, owner of Creative Machines, created this donut-shaped piece of art. Like other works by O'Connell, it lights up. Each night a different pattern of colored lights circle slowly inside. Insider tip: The light is interactive ... try lightly pressing the doughnut to see what happens.

Where: 255 Alameda Street between El Presidio Park and the Tucson Museum of Art

This walk-in metal sculpture is made from bike parts and features traditional religious architecture from several cultures. It has solar lighting, musical chimes and an area where visitors can attach pictures.

Bike Church was created by a team of youth led by Joe O'Connell and Blessing Hancock.

Where: Granada Avenue and Davis Street

This steel plant sculpture represents Arizona's 100th birthday. It has 100 leaves for each year of statehood and 15 blooms for the 15 Arizona counties.

It was created by Joe Tyler.

Where: The Broadway and Church Avenue streetcar stop

You get to control the colors in this piece through a touch sensor. There are triangular shapes that act as colorful stars working together.

It was created by Joe O'Connell and Blessing Hancock

A sculpture of a giant 8-foot Gila Monster reads a book in front of a little free library in the Dunbar Spring neighborhood.

It was created by Hirotsune Tashima and Jason Butler

Where: Second Street and 10th Avenue next to the little free library

This whimsical sculpture features a bat riding a bike. It's there to let you know where to watch the bats fly out at dusk and was created by Stephen Fairfield.

Where: It's 100 feet north of Broadway on the Pantano Wash segment of the Loop. There is also a bat and bike sculpture at the Rillito River and Campbell Avenue bridge.

The baseball and glove held by the tortoise represent the little league fields of the park. There's also a jackrabbit holding a basketball and geometric shapes reminiscent of alphabet blocks.

It was created by Jason Butler, Hirotsune Tashima and a team of youth and acts as signage for the park which is tucked away south of Golf Links.

These large-scale cairns are versions of the stone markers along hiking trails and were created by Simon Donovan with Caryl Clement and Santa Theresa Tile Works.

"Messenger" depicts a raven with a 19-foot wingspan and is a creation by artist Caryl Clement.

Where: On the north side of Speedway between Harrison and Houghton

The design of this sculpture was created as a tribute to the neon signs of the motels and restaurants along Miracle Mile.

It was created by Dirk Arnold.

Where: Oracle Road north of Drachman

This life-sized representation of an African elephant serves as a landmark for Reid Park Zoo and its African habitat.

The artists behind this giant elephant are Simon Donovan, Ben Olmsted

Where: Northwest corner of 22nd Street and Randolph Way

Epes Randolph was a Tucson business man and railroad magnate. The sculpture of Randolph is paired with train wheels and railroad ties.

The park, now known as Reid Park, was originally named after Randolph.

It was created by Nicholas Burke.

There are human and fairy shoes which act as a catalyst for imagining who these characters are while sitting in a 30-foot by 25-foot secret garden.

A tree grows out of a book in this sculpture by Joe A. Tyler at the Oro Valley Public Library.

Sculpture illustrates a day at the park with a family of quail. How adorbs is the skater quail?

A family of deer sculptures welcome visitors to Tangerine Sky Park. The new artwork was created by Trevor O'Tool and co-constructed by the Marana High School Welding Program.

Tucson's sexy anteater: Why Santiago is one of the country's top studs

Reid Park Zoo is home to one of the top anteater breeding programs in the U.S.

5 Tucson ways to enjoy art outside

From mural tours to sculpture gardens and pop-up ballet performances, there are lots of ways to experience local art outside in Tucson, Arizona.