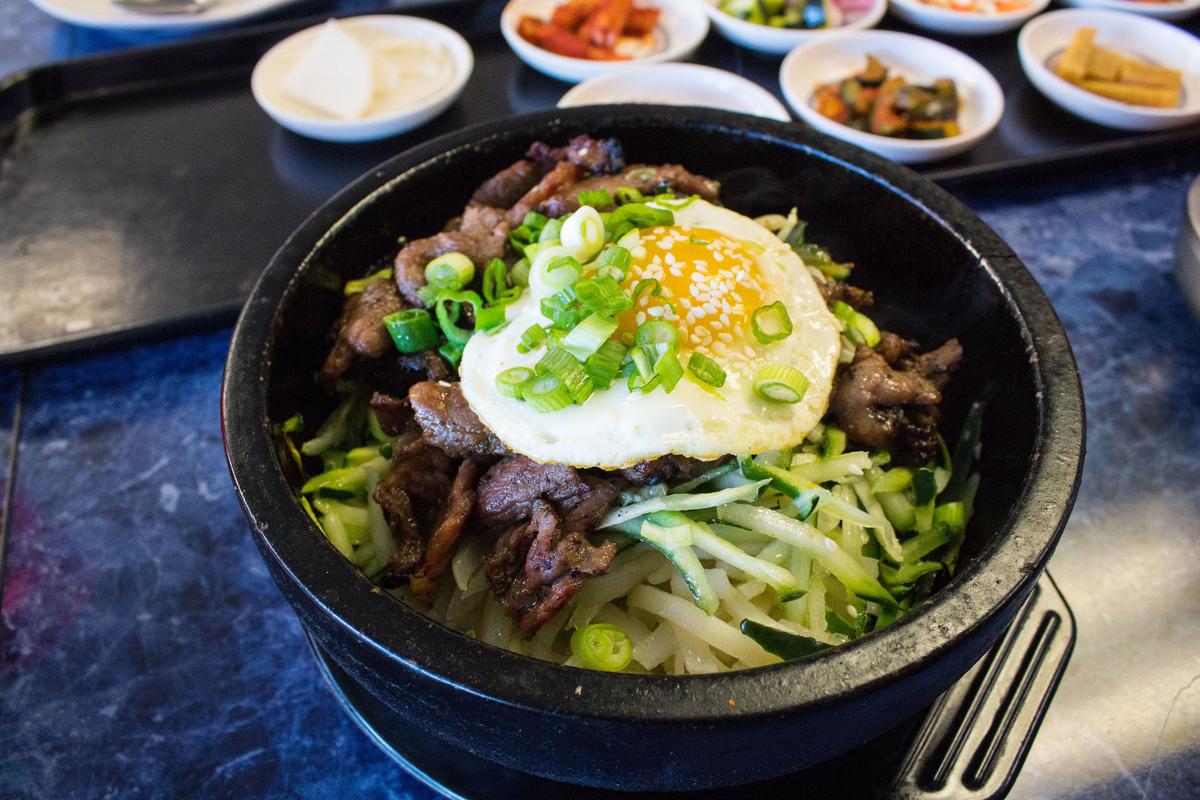 Dolsot Bibimbap, $13.99, is one of the most popular dishes at Sunna's, one of Sierra Vista's many Korean restaurants. 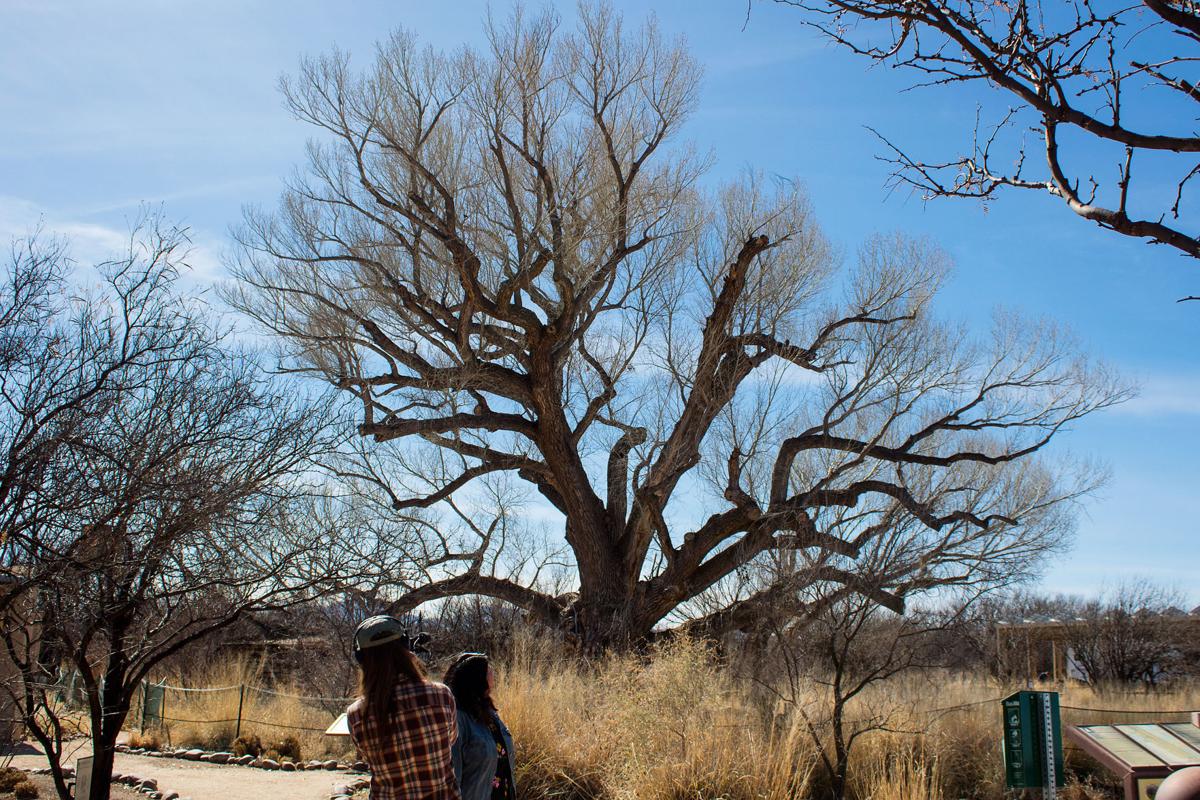 This century-old cottonwood tree kind of looks like the “Womping Willow” from Harry Potter. 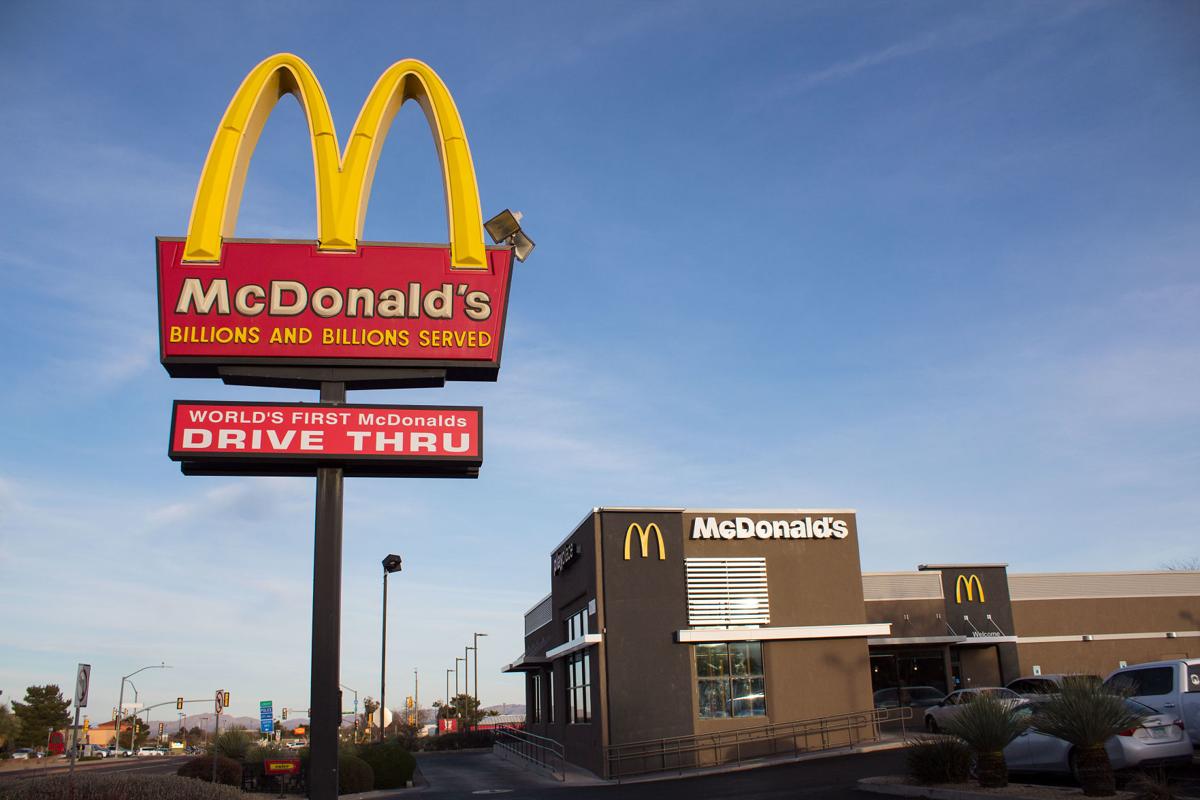 The world's first McDonald's drive-thru is located on Fry Boulevard in Sierra Vista. 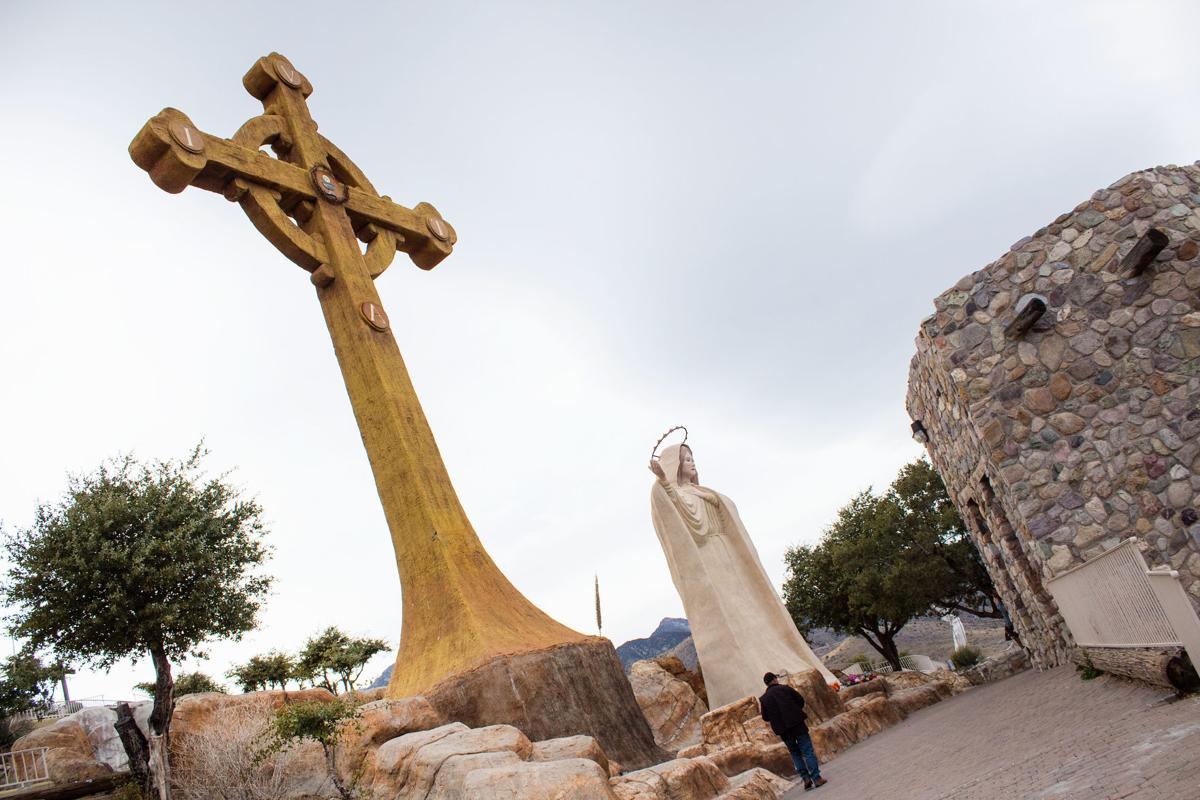 This Celtic cross at the Our Lady of Sierra's shrine is 75-feet tall with a 31-foot tall statue of the Madonna next to it. 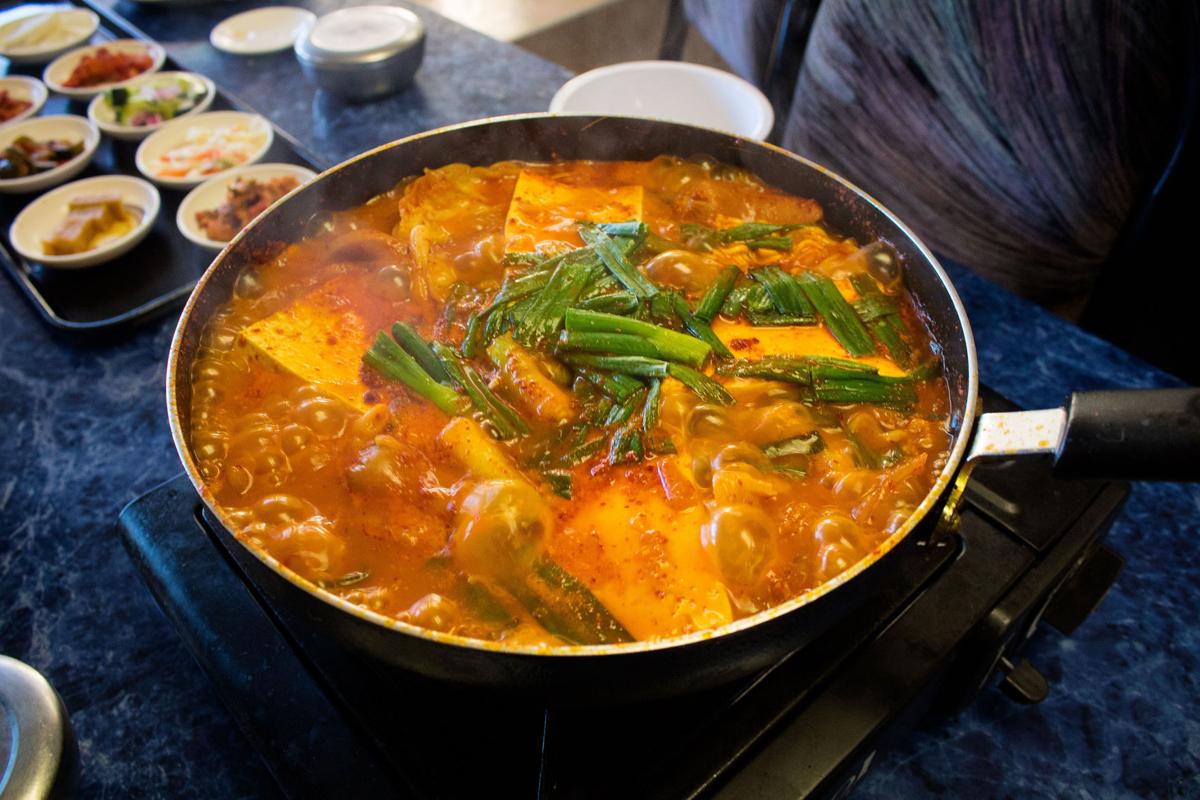 The badae jjigae, $24.99, at Sunna's is stuffed with tofu, ramen noodles, dumplings, hot dogs and more. 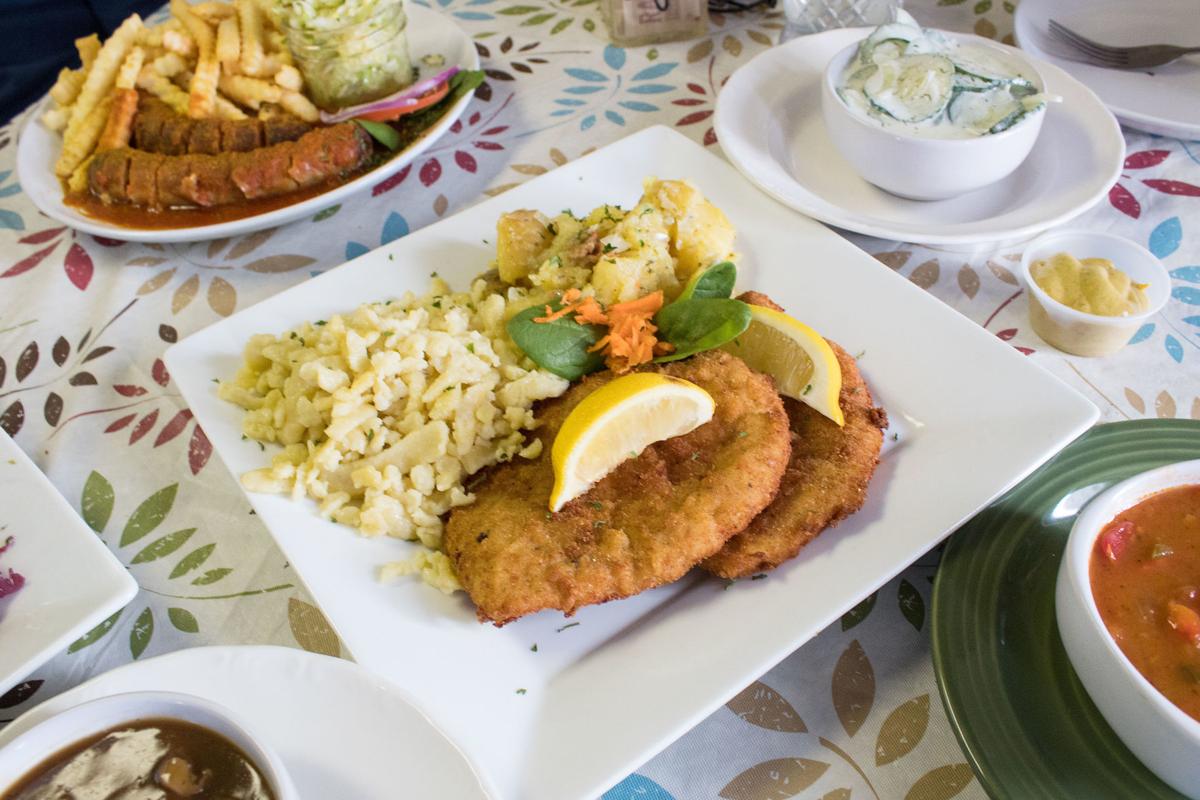 The German Cafe has an entire section of the menu that's "all about schnitzel." This is the standard Wiener style Schnitzel, $15.99, with spätztle and warm potato salad on the side.

This story was written by #ThisIsTucson and underwritten by Jack Furrier Tire & Auto Care. Thanks for supporting the local businesses that support us!

If you've ever driven southeast of Tucson to eat your way through historic Bisbee, go wine tasting in Sonoita or marvel at cave formations in Kartchner Caverns, you might have stopped in Sierra Vista to get gas or pick up some last-minute toiletries on the way.

Sure, you might think Sierra Vista is your average big-small town — but if you look a little closer you'll find a unique Arizona flair. This city of more than 50,000 people draws heavily from its neighboring military base, but is firmly rooted in the American Southwest. Sierra Vista neighbors the historic Fort Huachuca and is just a 45-minute drive from the U.S.-Mexico border.

For this trip we decided to skip the surrounding attractions and really explore Sierra Vista itself. To our surprise we found German and Korean restaurants, quirky monuments and a unique outdoor adventure. So without further ado, here are some things we learned stormin' though Sierra Vista:

Look beyond the Chili's and you'll find a shockingly eclectic food scene tucked into the stripmalls that line Fry Boulevard. Like many military towns, Sierra Vista has an international vibe as soldiers traveled, married people from other countries with bases, and brought them back to the U.S.

Tucson may have ten times the population, but actually has no German restaurants of its own. That's why Tucsonans take the drive down to grab a pretzel sandwich at Bobke's For Lunch, a wheel of bratwurst at Angelika's German Imports or pick up some groceries at Deutsches Eck.

If you're looking for a more comprehensive menu with "a little bit of everything," hit up The German Cafe for your schnitzel, currywurst and more. The homey restaurant makes a fantastic spätztle, an egg noodle side dish that totally steals the show. They also have some of the best potato latkes I've ever tasted at a restaurant. But don't fill up before you get to dessert; Their small bakery in the front produces beautiful German pastries like apple streusel cheesecake.

We went in knowing about the large variety of Korean restaurants, but we didn't expect to also find Vietnamese food, sushi, Thai and more ... On our next visit we really want to hit up Tanuki Sushi Bar and Garden, a small boutique space with a similar vibe to Tucson's Yoshimatsu.

But our first choice was Sunna's, a homey restaurant run by Korean native Sunna Tighe. Eating here feels like going over to your friend's parent's house ... Sunna was literally the only person working the lunch shift. She not only told us what to order, but showed us into the kitchen, cooked our food, served it tableside and even wiped one of our mouths when we got kimchi soup on it.

Speaking of the soup, she made us a massive pot of steaming chile broth called budae jjigae, also known as Army Stew. Created shortly after the end of the Korean war, budae jjigae is a kitchen sink creation originally made from war rations like hot dogs, ramen noodles, ham and more. Sunna's version also has tofu, dumplings and an egg, which boils directly in the soup. It's best to share this one.

A giant cottonwood tree lives next to the San Pedro House

Head west on Arizona Highway 90 to the outskirts of Sierra Vista near the San Pedro River. You’ll know you’re close when you spot a corridor of cottonwood trees lining the landscape like the Great Wall of China.

The San Pedro is one of the few rivers in the world that travels from south to north, starting in Mexico in the Sierra Manzanal Mountains and stretching over 140 miles to join the Gila River near Winkleman.

The river is notable for a number of reasons — including being a national riparian conservation area and the place of important archeological finds, like the Murray Springs Clovis Site.

Before you start trekking up the river to spot birds and dig up mammoth bones, be sure to stop by the San Pedro House located up a small dirt road near the river.

What was once a a family ranch house in the 1930s has been transformed into a visitor’s center and bookstore that’s managed by the Bureau of Land Management and run by volunteers of Friends of the San Pedro River. It’s here you’ll be able to find some of the largest Fremont Cottonwood trees in Arizona, lovingly named Bailey and Plaza.

Bailey, planted in 1956, is the large tree behind the house: It’s currently home to a very cute Western Screech Owl that nests in the heart-shaped notch of the tree.

Plaza, located to the west of the house, is around 100 years old and is the biggest of the two. A couple of years ago, Plaza began to show signs of decay and the BLM was interested in tearing it down as the tree was a hazard to visitors. However, it was ultimately decided that the tree would be able to die naturally on the property and was given a good pruning and a fence to keep people from getting too close.

You can visit the world's first McDonald's drive-thru

It's easy to miss because it looks like any other McDonald's. But if you look closely at the golden arches sign you'll see the world's first drive-thru pronouncement tucked in there underneath the "billions and billions served."

The world's first McDonald's drive-thru was added in January of 1975 to cater to servicemen who worked at the adjacent Fort Huachuca. The year before, the army had instituted a regulation keeping military members from wearing their fatigues inside local businesses. That's when McDonald's started to get creative and allow servicemen to get their Big Macs without getting out of the car.

The original McDonald's drive-thru location was actually demolished in 1999 to make way for a new one next door, with TWO drive-thru windows. (Now there's a Chevron gas station sitting in its place.) But inside the new location, you can read about its history and look at a retro Ronald McDonald sculpture that was used as a speaker in the first drive-thru.

Driving south on Arizona Highway 92 toward Bisbee, you can see a giant cross rising out of the Huachuca Mountains. This lavish monument is a curious sight compared to the flat skyline of Sierra Vista.

But the Our Lady of Sierras Shrine is actually a monument to one local couple's faith. The hillside site is open to the public and features a 75-foot-tall cross as well as a 31-foot statue of the Madonna.

Built in the '90s following a spiritual visit to Yugoslavia, the shrine attracts visitors from across the country, as it's believed to be a place where miracles happen. (During our trip we were able to reunite a woman with her lost wallet.)

This tranquil compound starts with a small chapel at the bottom, with stairs that lead you through the stations of the cross, and a place for reflection at the top. The Our Lady of Sierras Shrine offers stunning panoramic views of the vibrant city below. You'll be glad you made the trip.