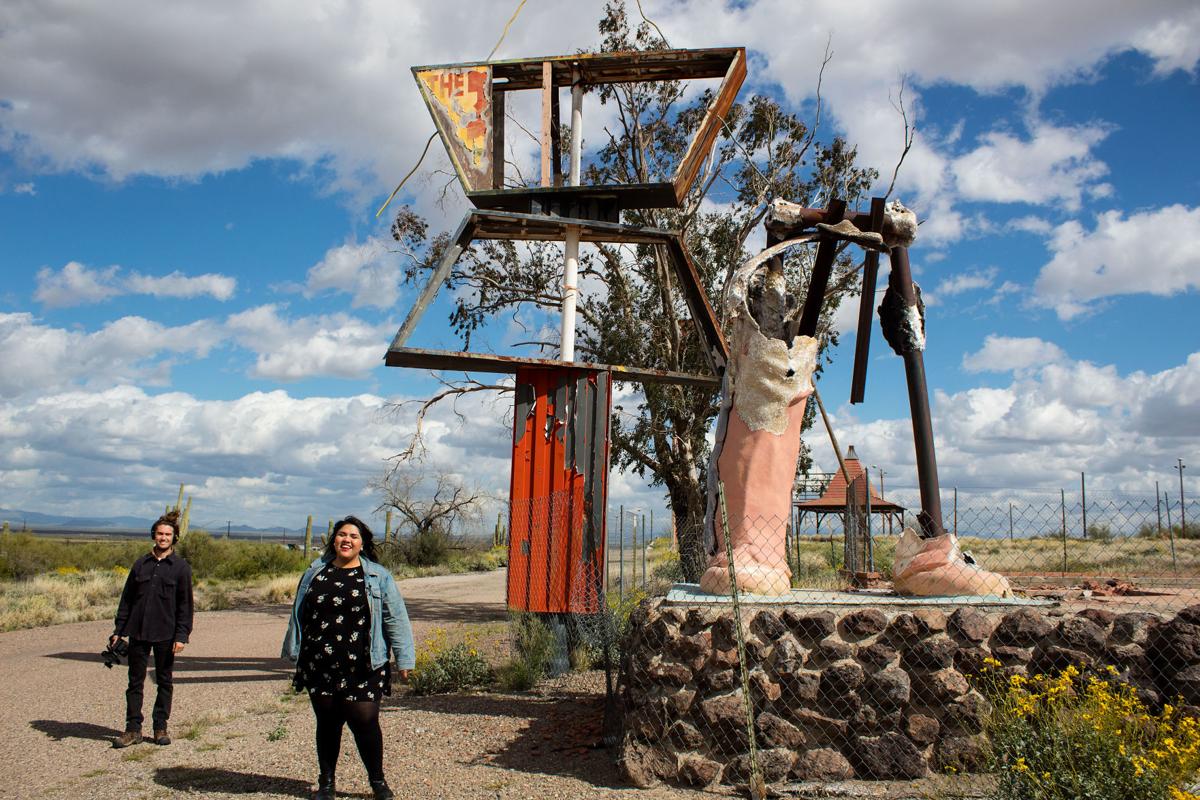 Sam and Nick stand by the ruins of the Picacho Peak Trading Post, which used to be a gift shop until it burned down in 2002. 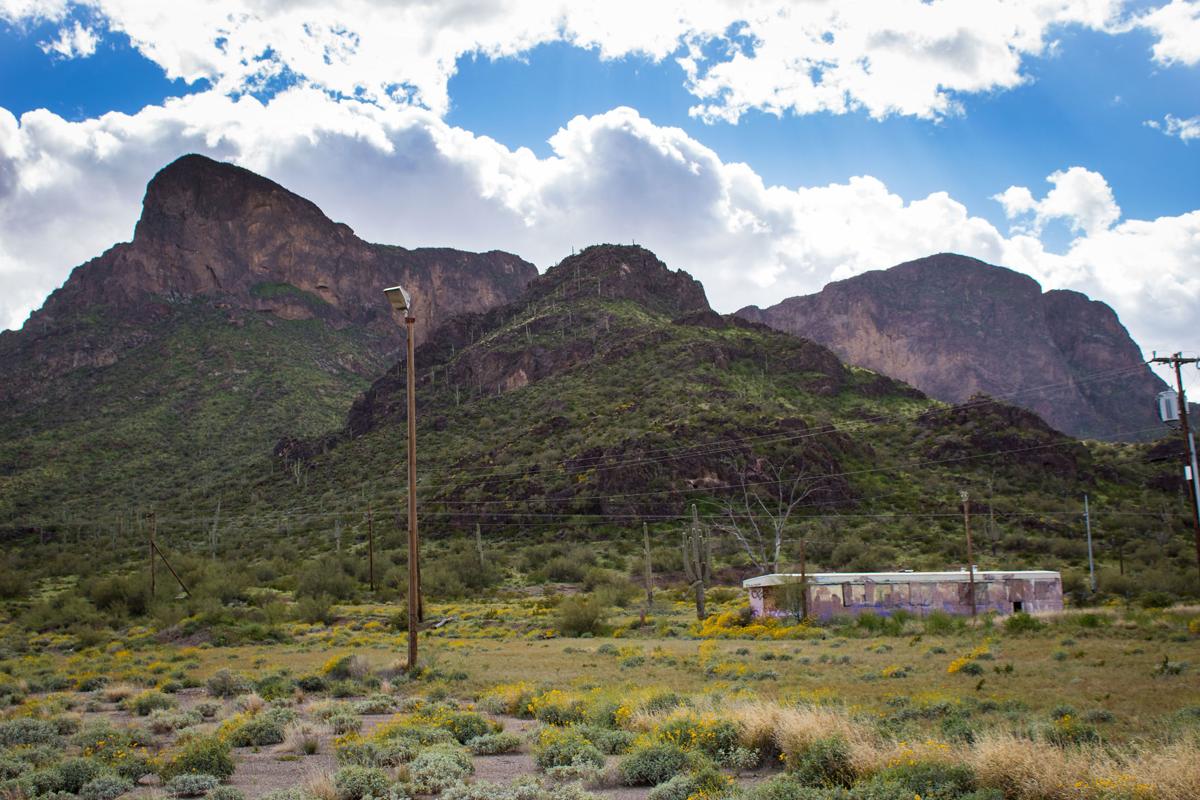 View of Picacho Peak from the road. It's so green right now! 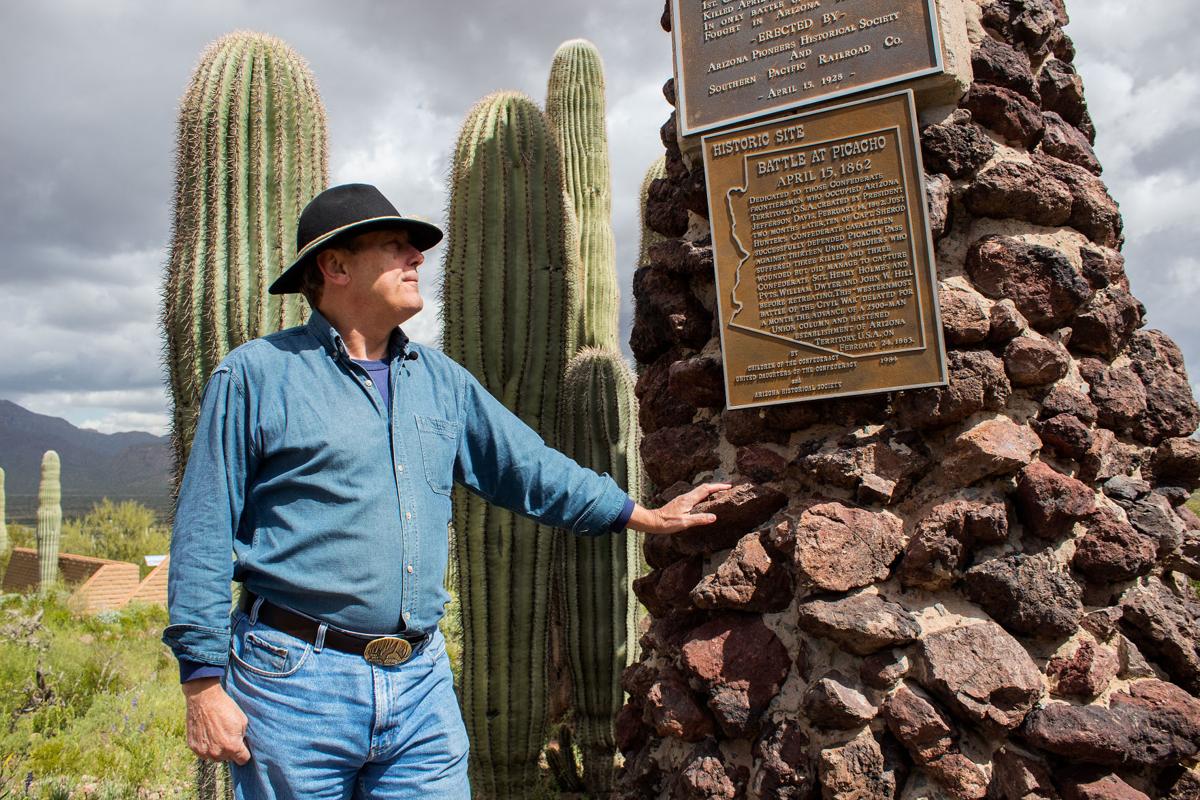 Civil War expert Steve Smith showed us around the Civil War memorial on the park's grounds. 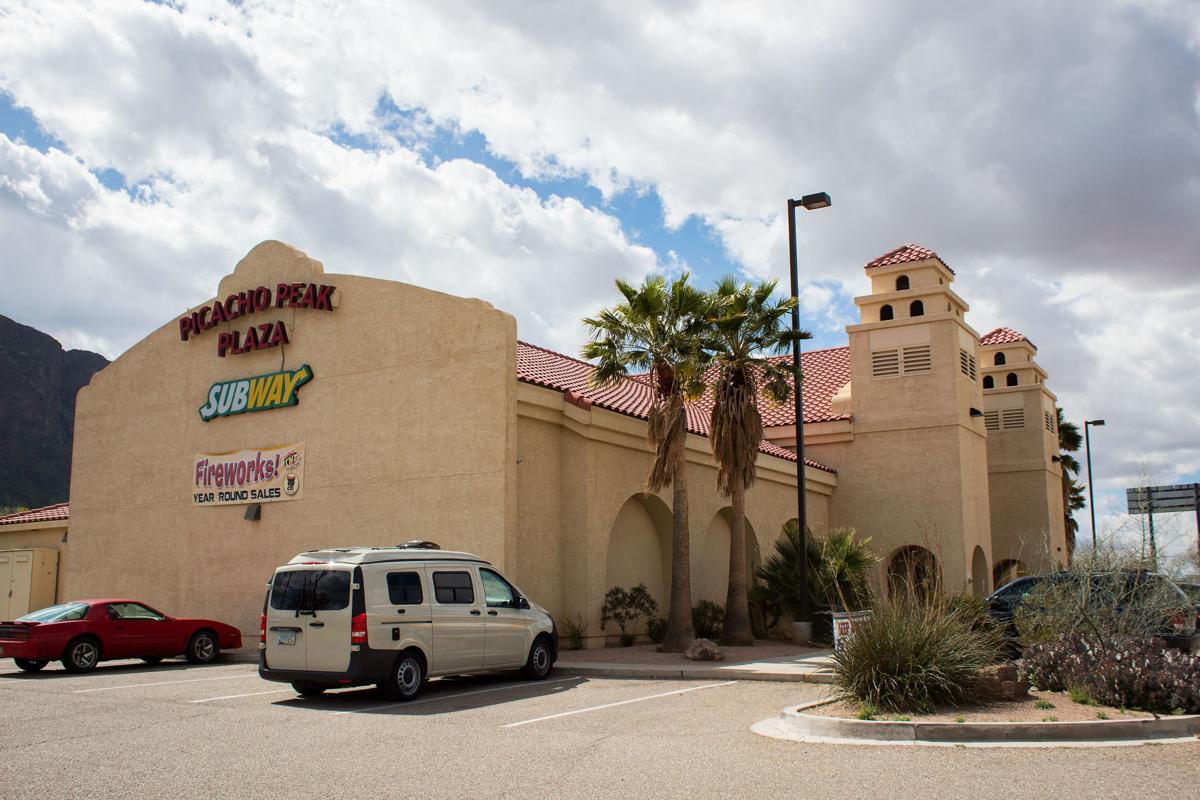 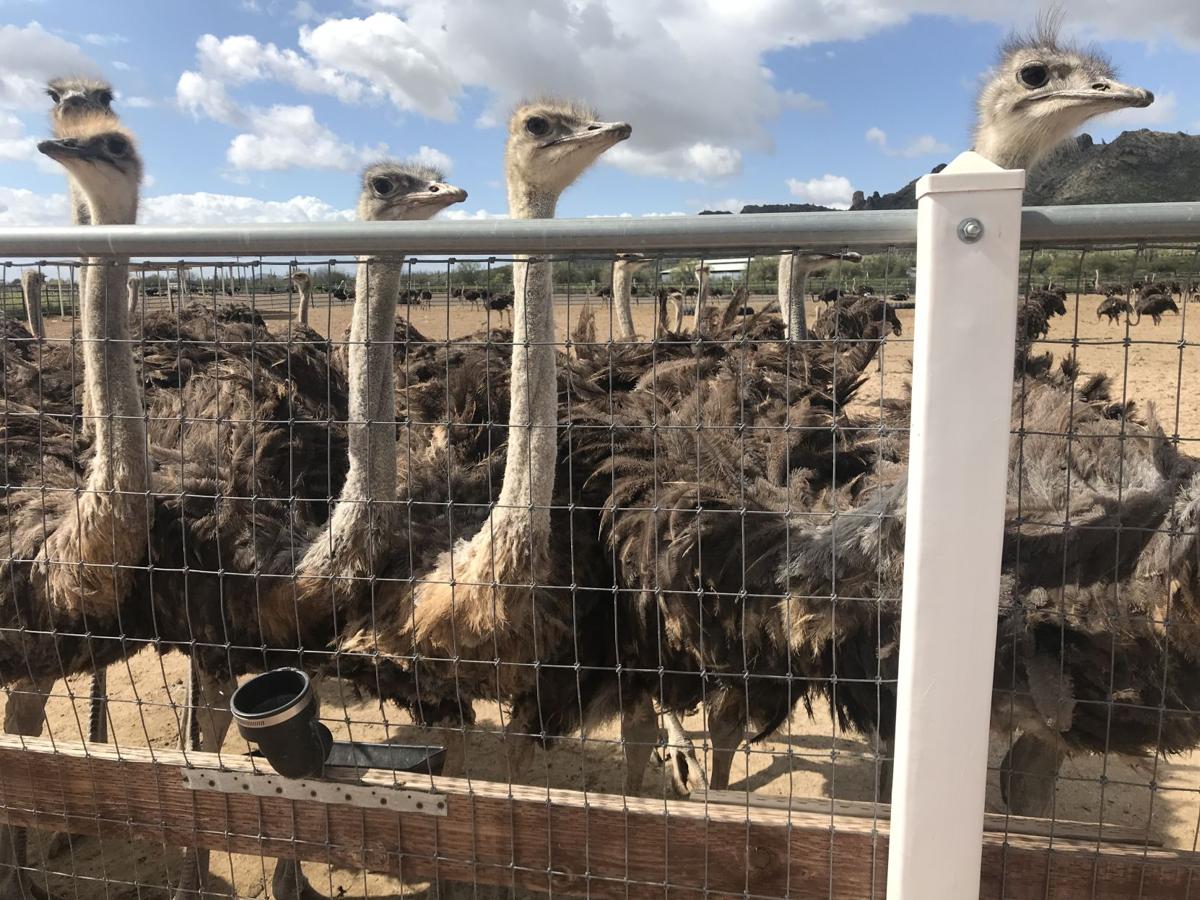 These ostriches look pretty big, but they're actually babies! 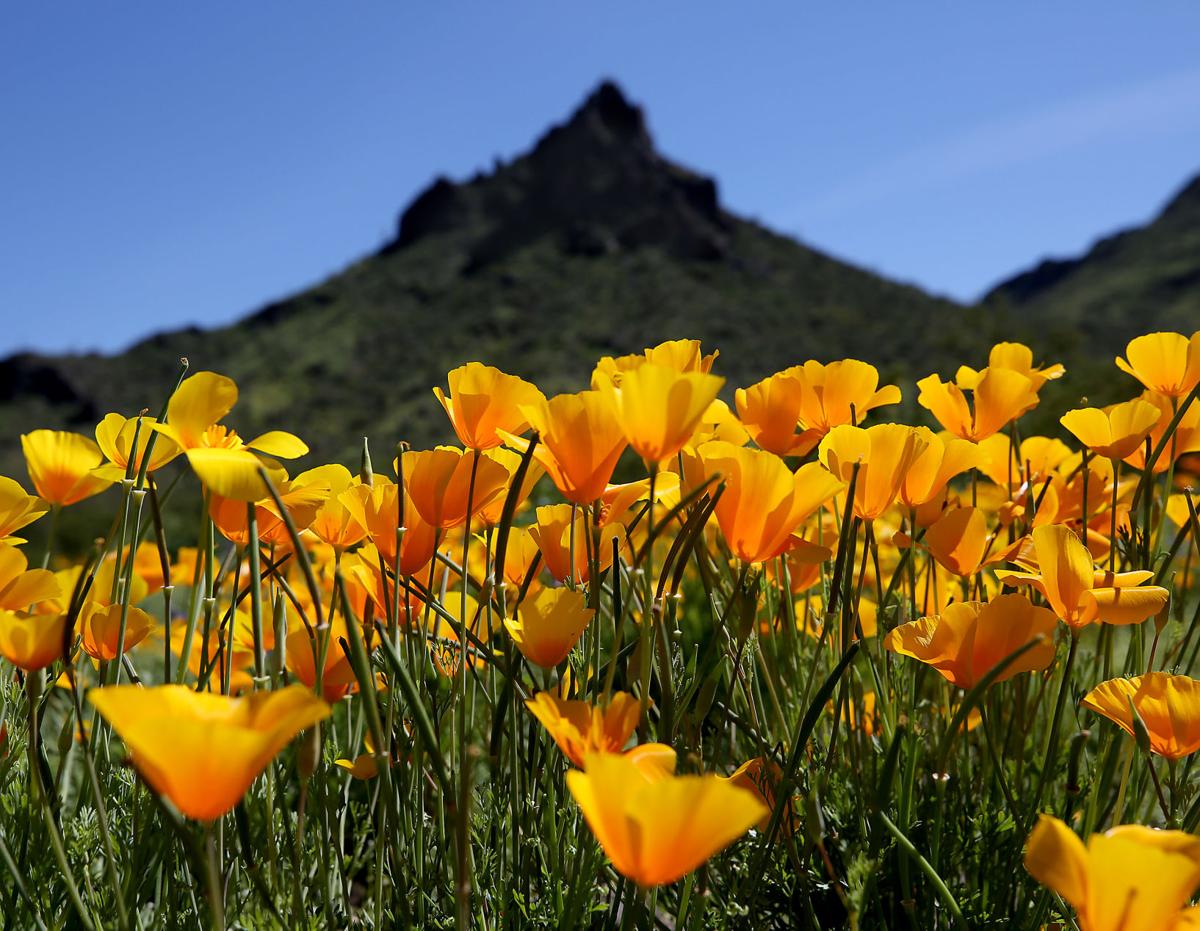 Spring poppies and other wildflowers are in bloom and all over at Picacho Peak State Park on March 5.

The desert is alive with bloom of wildflowers!

Rolling yellow poppies and purple lupine flowers are an unfamiliar sight in this harsh terrain of cactus and brush. But they’re here, thanks to plentiful rainfall and cooler temps in the final winter weeks. You can see the brilliant displays of wildflowers all over Tucson, but the weather is so nice it’s worth taking a trip to see these brilliant blooms out in the open.

And you can’t talk wildflowers without Picacho Peak. This hiking destination has managed to find its way into every Tucsonans’ social media feed, with photos of unbelievable blooms and clear blue skies — we’re practically sneezing just thinking about it!

Picacho Peak has been a Southwestern landmark for centuries. It was home to the Hohokam from around 750 to 1450 AD, according to Arizona State Parks and Trails, and also hosted an array of travelers including Spanish Conquistadors and the Mormon Battalion.

Today, this volcanic cliff is just as beautiful as it is quirky. Lining the base of the mountain along Interstate 10 is an ostrich farm, a kitschy rest stop and even an adult store. Walking the grounds at the base of the peak, you can also find decaying remnants of the collapsed Nickersons family restaurant, and the Picacho Peak Trading Post, which burned down in 2002.

Some people may also stop at Picacho to go hiking, grab a soda or feed the lorikeets — and on this trip we did all of the above. We spent a day exploring the unique beauty and history of Picacho Peak AND ate a Subway sandwich, because that’s what road tripping is all about.

Here are some thing we did along our trip that we think you’d enjoy too.

You might have seen this large animal compound with a giant sign declaring “FEED THE OSTRICH” as you puttered along I-10 and thought, “Don’t those birds bite?” The answer is yes, but you should  give it a shot anyways.

The Rooster Cogburn Ostrich Ranch is has been a roadside attraction near Picacho Peak since it opened 1999. Back then, the Cogburn family only had a picnic table and a couple of ostriches for people to visit, said Danna Cogburn-Barrett, co-owner of the ranch.

It has since grown into a giant animal party that includes feeding creatures like Fallow Deer, Miniature Sicilian Donkeys, bunnies, Rainbow Lorikeets and much more.

One of the biggest kicks we got was when Danna showed us how to give a goat a kiss by putting food pellets in between our teeth and having a goat take it away with their mouth. It was both a horrifying and silly experience all at the same time.

We were also stunned to find the majority of St. Croix Sheep at the ranch were clones the Cogburn family picked up from a university who bred the sheep for research. From Dolly the Sheep to Rooster Cogburn, science is everywhere!

Surprising fact! Picacho Peak State Park is actually home to a unique episode of Civil War history. On April 15, 1862, more than 20 soldiers duked it out in a nearby mesquite bosque. This “skirmish” lasted for more than an hour and is now considered one of the westernmost battles of the Civil War.

Although the skirmish is little more than a footnote in Civil War history, the park hosted a re-enactment of the event every spring until recently. Arizona Civil War Council member, Steve Smith, used to participate in the re-enactment and agreed to meet us at Picacho Peak State Park to talk about the American history that took place here.

“For those 22 guys, that was the Civil War. They're shooting each other, they're fighting and dying. So it doesn't much matter to me if it was Picacho Pass or if it's Gettysburg,” Steve said.

In addition to knowing a lot about Southwest Civil War history, Steve travels across the United States to join in other re-enactment battles. He usually plays a Union soldier, but will swap out for Confederate if they’re short of men. (Apparently, Confederate re-enactors are always in demand.)

Although you won’t be able to find people dressed as Civil War soldiers near Picacho Peak any time soon, you can still catch other re-enactments put on by the Arizona Civil War Council. Check out the full list of upcoming events here.

This roadside Shell station may be Picacho Peak’s most popular feature. The Picacho Peak Plaza is a trusty highway stop along the road between Tucson and Phoenix. The gas may be cheaper up the road in Casa Grande, but the AM-PM can’t compare to the pomp of Picacho.

This is your one-stop-shop for funny magnets, Southwestern socks and taxidermied coyotes that cost $1,299.99. The plaza is owned by the Bowlins chain of truck stops, which also owns The Thing in Eastern Arizona. They’re known for having the best gift shops.

Instead of the cookie, we ate some of the kitschy snacks from the convenience store. Red chile peanut brittle? Sure!

We hiked to the top of the peak...well, almost

We were finally ready to look at the wildflowers at Picacho Peak State Park late in the afternoon, after a cold and windy morning had us worried we weren’t going to be able to see the colorful blooms for ourselves. Luckily, the sky opened up and for a couple of hours we were able to enjoy some flowers as we attempted to hike up Picacho Peak.

There are a number of trails you can take around the park, but if you want to get to the top, you can take either the Sunset Vista Trail (which begins at the back of the peak) or the Barrett Loop Trail (at the front). Both will lead to the Hunter Trail, a steep 1.6-mile trail that takes you to the summit using steel cables that are hammered into the rock. This hike is for serious inquiries only. The trail is labeled as “difficult,” and one Phoenix New Times writer even described it as a “Hell Hike.”

Fortunately for us, the setting sun gave us an excuse to turn back before things got really hard. We did see some groups of people coming down who were practically glowing with accomplishment though. (Or maybe it was just sweat, not sure.) Even if you only go about half an hour up, you’ll still be treated with a beautiful vista of the distant trains below. Just watch out for those rocks, they get ya!