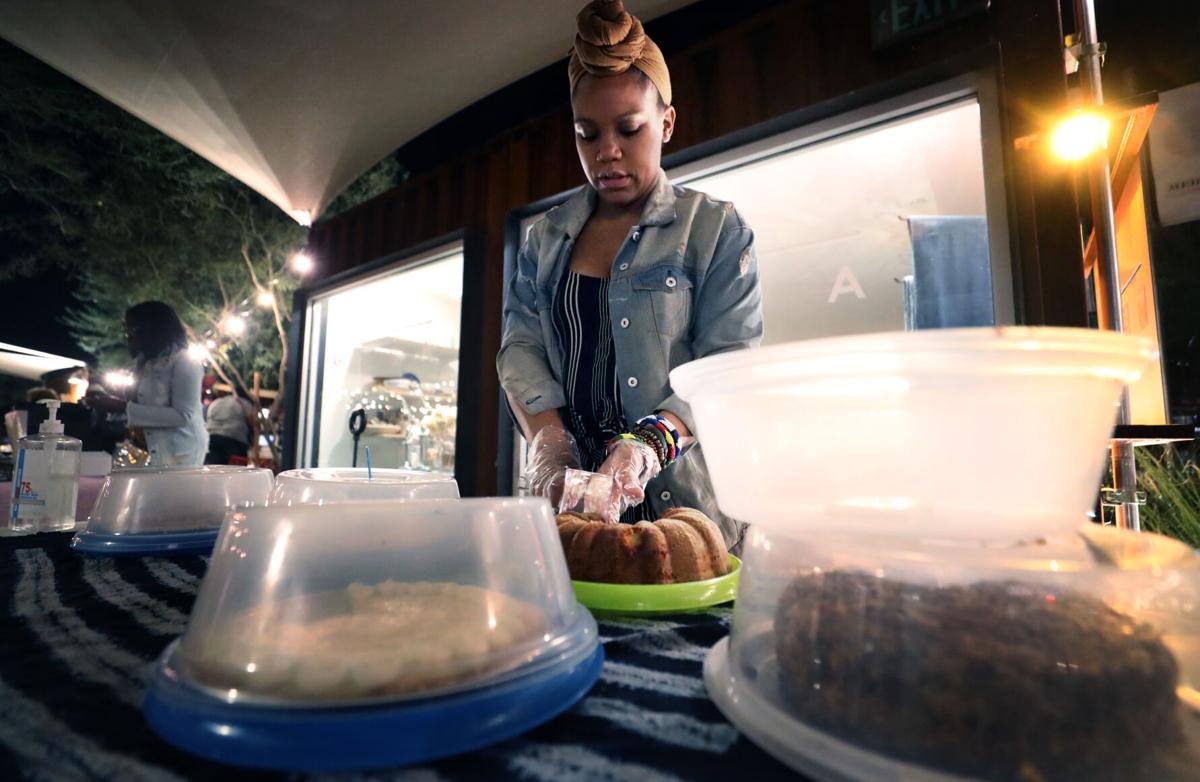 Elizabeth Berryhill slices her bundt cake, one of six pies and cakes at her Classic Custom Cakes & Sweet Treats table during Blax Friday's Soul Food Wednesday at the MSA Annex on Oct. 27, 2021. 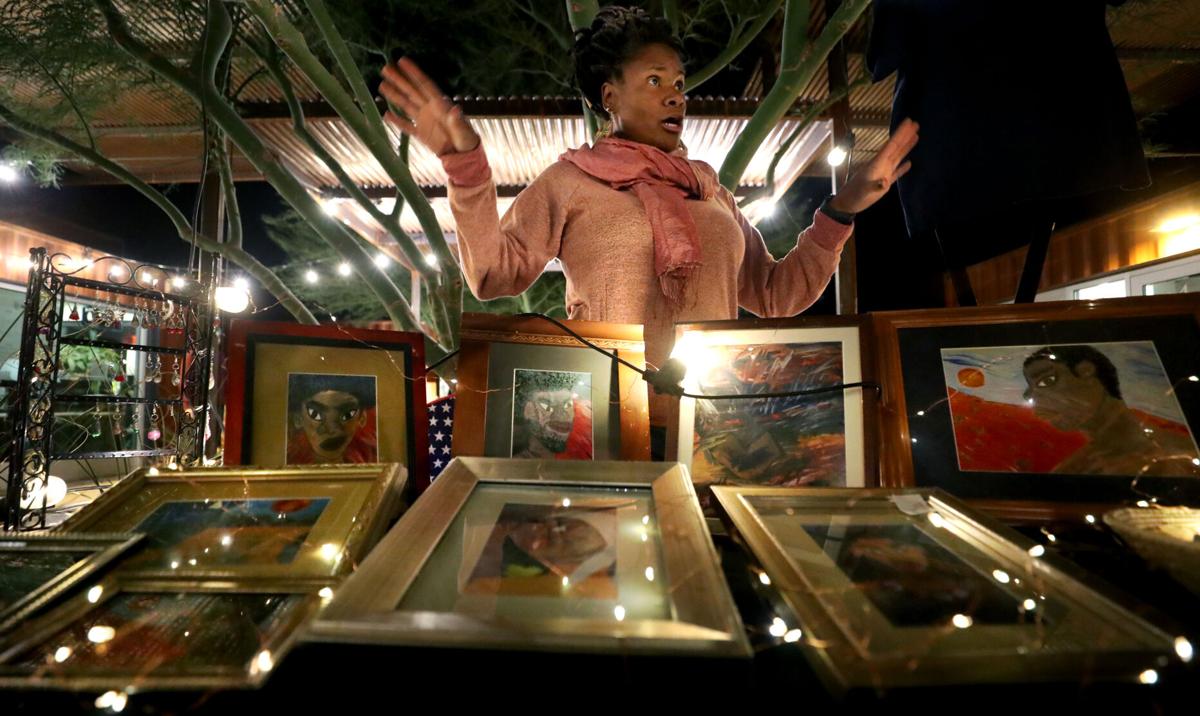 Randiesia Fletcher talks about the stories behind her paintings at her Living2Portraits booth during Blax Friday's Soul Food Wednesday at the MSA Annex. 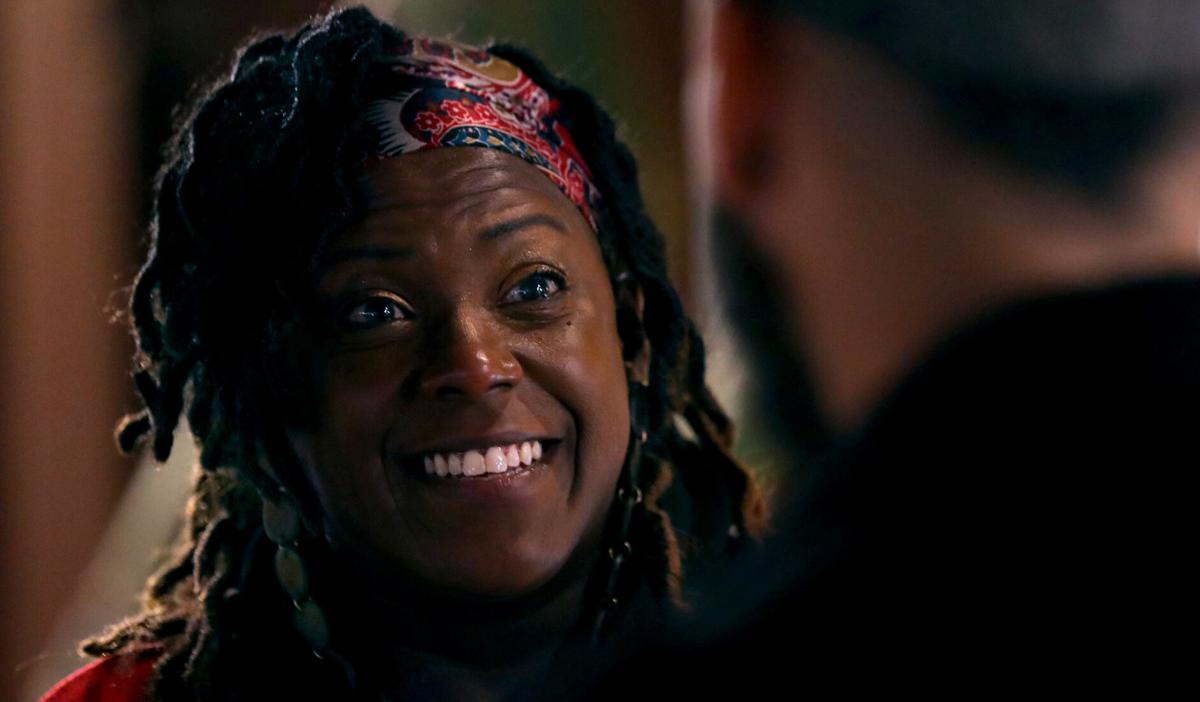 Ashley La Russa talks with one of the night's visitors during Blax Friday's Soul Food Wednesday at the MSA Annex. 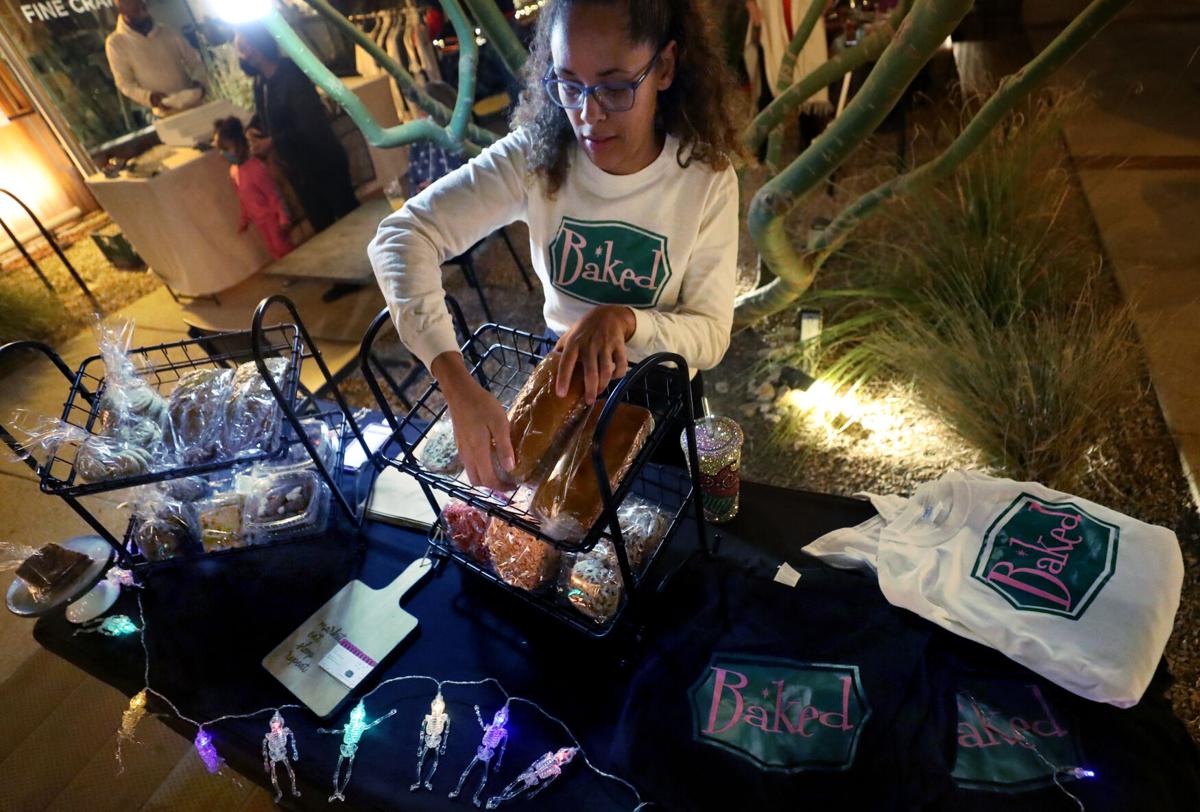 Tina Newton, owner of Baked, restocks some of her bread after a visit from an eager customer during Blax Friday's Soul Food Wednesday at the MSA Annex. 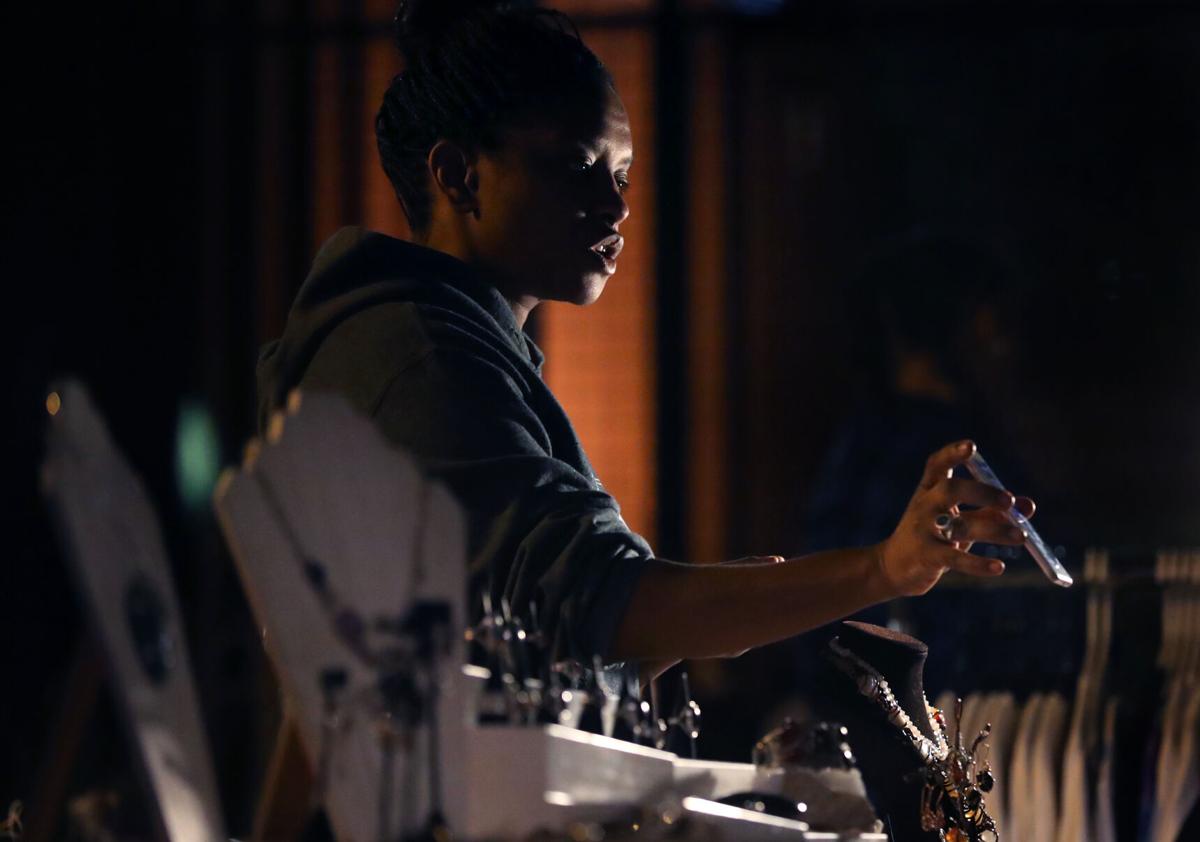 Davia Moore with Ankh Couture talks to a customer about the handmade custom jewelry she and her brother Shaman Moore have on display during Blax Friday's Soul Food Wednesday at the MSA Annex. 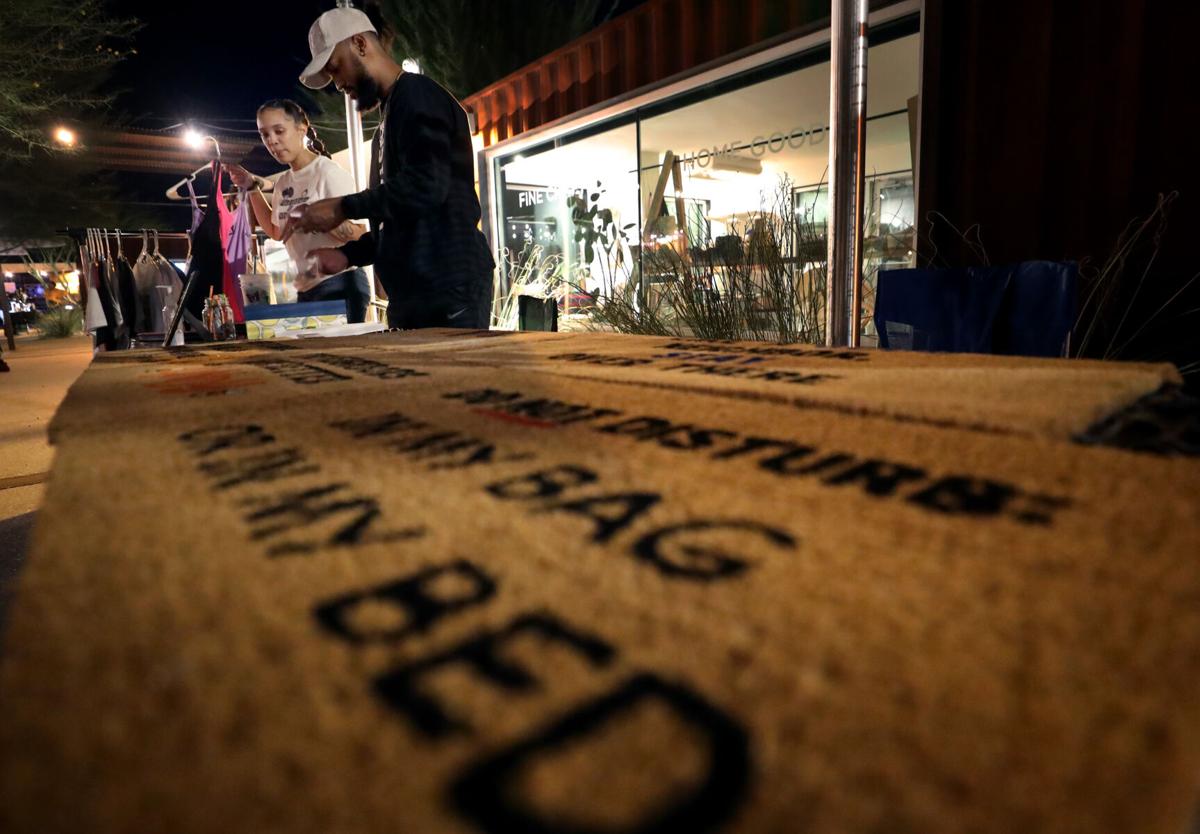 Nadia, left, and Arlandis Hinton arrange their custom items out on display as Sistas & Sons gets ready for business during Blax Friday's Soul Food Wednesday at the MSA Annex. 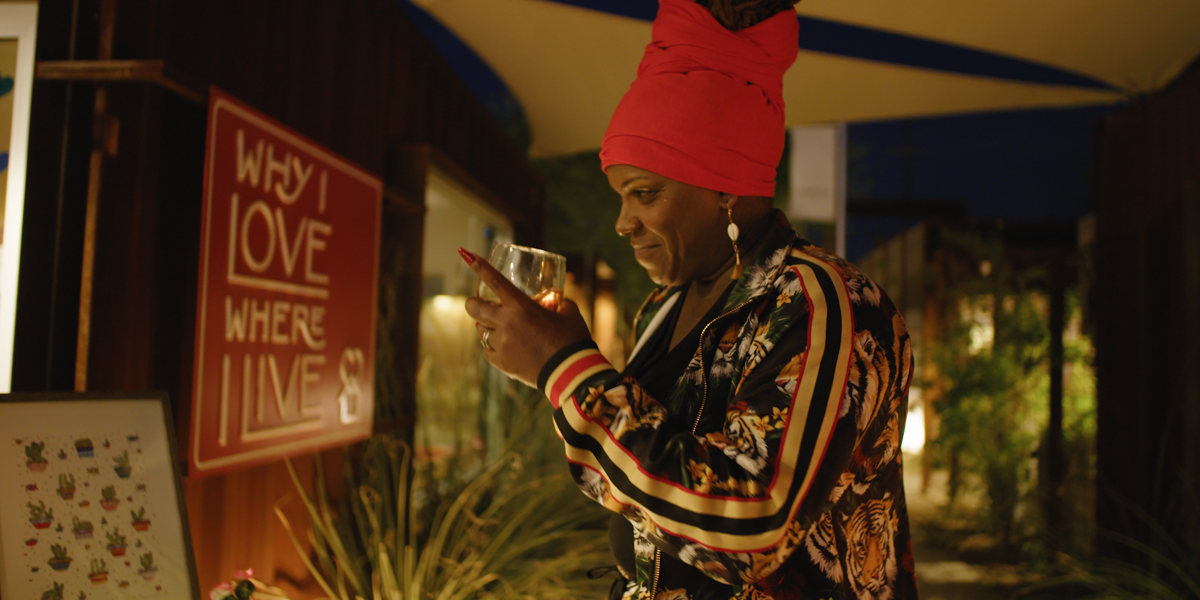 This story was created by #ThisIsTucson and BRINK and underwritten by Vantage West, celebrating the locally-owned businesses that make our community strong. Thank you for supporting the local organizations that support us!

Blax Friday started as a single spreadsheet to boost the visibility of Black-owned businesses in Tucson.

Just one week after the spreadsheet launched in June 2020, the team behind Blax Friday unveiled an accompanying website.

The following Friday after that, the team introduced a phone app.

And the Friday after that, the team hosted its first virtual event.

Now more than a year after that spreadsheet was created following the murder of George Floyd by a police officer in Minneapolis, Blax Friday has gone statewide — becoming a directory for Black businesses and Black business owners across Arizona.

“Our main focus is representation and being able to locate Black businesses in the state of Arizona,” says project lead Ashley La Russa.

“‘How many Black businesses are here?’ was the main question we heard all the time,” La Russa says. “We would see promotion and advertising — top 17 restaurants, 7 barber shops — we would always see those numbers, but we would know there were so many more that never had the chance of being spotlighted.”

The beginning of Blax Friday

For La Russa, starting a Black-owned business directory was something she always wanted to do — especially when she started her own event business, Roux Events, and was looking for other Black business owners to collaborate with.

“I always had the passion of creating something, but never had the time,” she says.

And then the COVID-19 pandemic struck, leaving many people with nothing but time.

“When things started to shut down during COVID, I found myself with the opportunity of time to start to build that out,” La Russa says. “And with the urgency with the murder of George Floyd, it was the importance of Black Lives Matter and Black businesses matter.”

So, it started with a single spreadsheet through Google Sheets listing local Black-owned businesses. La Russa never thought that spreadsheet would turn into what Blax Friday is now.

To build the initial spreadsheet, La Russa and a team of Black business owners started filtering through the hashtag #BlaxFriday on social media. #BlaxFriday is a search term created long before the spreadsheet launched as a way to track Black business information in Arizona. The hashtag was created by team member Khailill Knight, with support from Michaela Baker who helped get out the word.

“We were just looking to get the information out,” La Russa says. “I would always refer businesses one-on-one, but when we started the spreadsheet and saw how much it was growing, it became the next step to be able to export that into a website. And then we just reached for the stars in June of 2020, going, ‘What if we do an app as well, using the same information and data?’”

“With community members waiting and looking for that information, it really does speed things up in a positive way and make it an urgency for yourself to complete,” La Russa says. “It’s not as relaxed when you’re passionate about it, going, ‘People need this and are asking for this.’”

“We’re all business owners ourselves so the amount of time and effort to keep it sustainable was really coming from community partners and community members themselves,” La Russa says.

Plus, when using Google Sheets, you can see how many other users are actively looking at the document. La Russa says the spreadsheet consistently had more than 99 people on it.

“I was saying, ‘There’s 100-plus people looking at this spreadsheet daily. We need to make this more comprehensive and accessible to the community,’” La Russa recalls.

“By doing that, we were just really saying, ‘OK, this is not just something we let phase out,’” La Russa says. “We want to keep this and move forward as a tool for the community to use in the future.”

Inclusivity in the community

When Blax Friday operated as a Google spreadsheet, the team opened it up to the public — allowing the community to notify them if any Black businesses may have been missed.

“If we were missing someone in a category, people would let us know and we could update it in real time,” La Russa says, adding that the spreadsheet was never final.

That concept of inclusivity with the community stuck when Blax Friday built its website.

“One of the barriers we wanted to tear down was the accessibility to business owners,” La Russa says. “We’re not gatekeepers where only we can add their data.”

Business owners are able to enter their own information and the Blax Friday team confirms the details.

“We want to tear down those sort of systems — member-based directories — and we want to be accessible,” she says.

Where Blax Friday is now

In addition to its website and app, Blax Friday publishes a weekly email newsletter that promotes events, plus conducts social media promotion.

“We’re just getting the word out and helping facilitate and connect what’s happening with Black businesses in the state of Arizona,” La Russa says.

“We try to offer marketing promotion. We find many of these businesses tend to prioritize their funds to inventory and if they are a brick and mortar, then to operational costs,” La Russa says. “We try to lend a hand to marketing and promotion — (some businesses) may have had to let go of their websites. By offering a page on Blax Friday, they’re able to keep that digital footprint and have that SEO present and be searchable.”

Blax Friday has also hosted events, such as Soul Food Wednesday at the MSA Annex, and campaigns such as their "Holla-Day" shopping guide.

The team also recently hosted its first in-person Black business mixer — something it hopes to one day do quarterly.

Beyond positive feedback from businesses and community members on social media and word-of-mouth, La Russa says businesses have seen an economic boost since having their business listed on Blax Friday.

For instance, one business owner who sells her products out of a location on Fourth Avenue would see three to four sales a week from people going into the brick and mortar to make a purchase.

She said that number more than tripled when she became visible on the Blax Friday website and app because people didn't realize she also had a website to shop from instead of going into the store.

Looking to the future

Ultimately, La Russa hopes that Blax Friday becomes a “vital tool for not only our community members to utilize but also organizations and corporations hiring independent contracts and business-to-business relationships.”

“We’re solving the issue we encountered years ago — of people saying they just didn’t know and couldn’t find anyone,” La Russa says. “(Blax Friday) can truly be beneficial to the greater good of this state if we are truly looking at diversifying staff.”

A month after Blax Friday emerged, the team moved the platform from just Tucson to the Phoenix area, and later to the rest of Arizona.

“It was a mission to locate us all and knock down the barriers of city limits,” La Russa says.

“There’s so few of us, so why don’t we combine our efforts that drove our mission of finding each other and keep a number of businesses together?” she says.

Currently, about 1,000 businesses are listed in Blax Friday’s directory. The team hopes to reach 1,500 by the end of the year.

“It’s a dream come true,” La Russa says of the progress of Blax Friday. “It shows what the power of a group of people can do and a community can do as they all work toward a common goal. We can all get bogged down with systems and it can take years to accomplish if it’s in the wrong hands.”

Supporting local businesses as they Thrive

With a trike full of tools and cumbias on blast, Barrio Restoration cleans up streets on Tucson's south side

For much of his life, David Garcia has made his living as a landscaper. But he calls the unpaid work he does under the name Barrio Restoration — cleaning and beautifying the curbs, sidewalks and roundabouts on Tucson’s south side in his free time “landscaping with a purpose" and "doing good for the hood."

Boss Women Unite is a woman-owned business that helps other women entrepreneurs, artists and makers find community and support as they pursue their goals. Tiffany Nakatani is the owner and creator.

Free Ever After Bridal Boutique and Masterpiece Mentorship use proceeds from secondhand dresses sold in the Tucson wedding dress store to support mentoring programs for survivors of sexual exploitation.