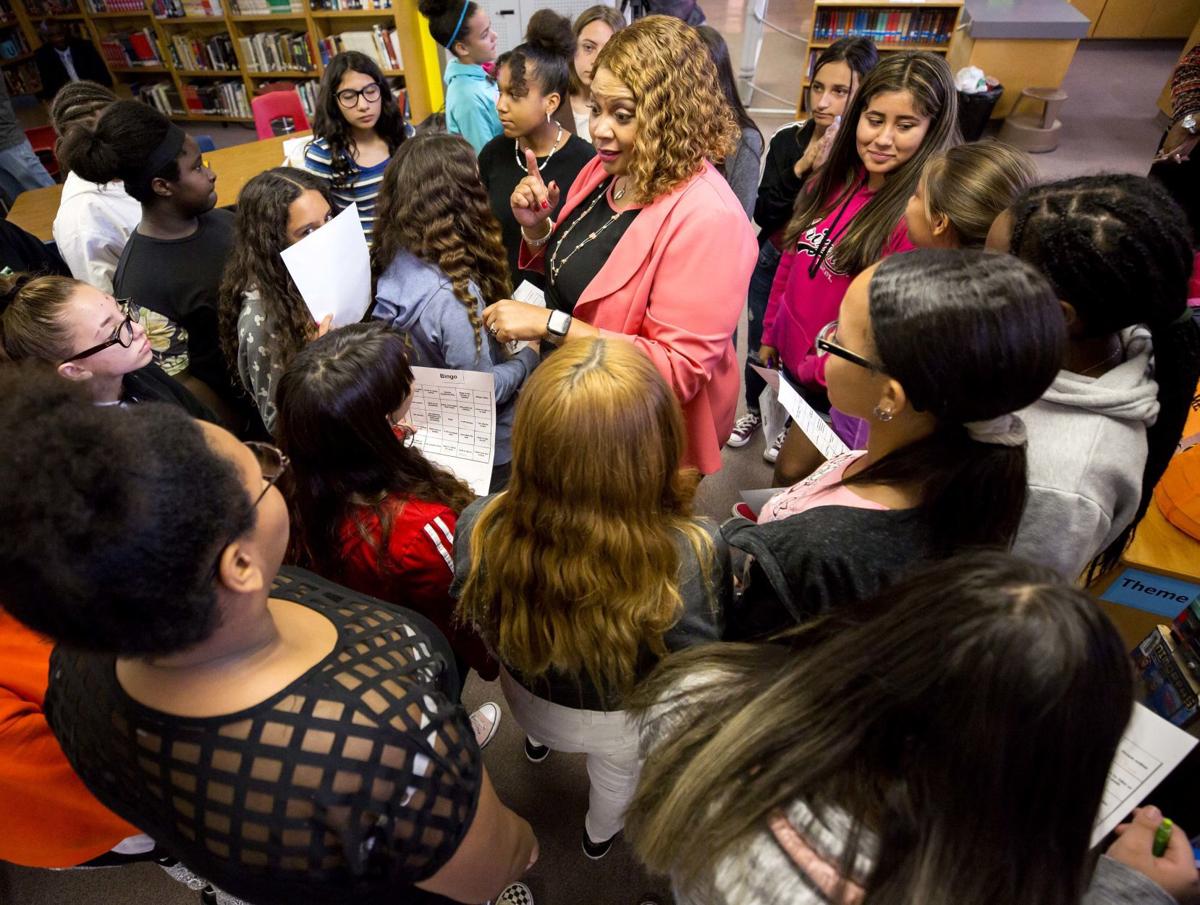 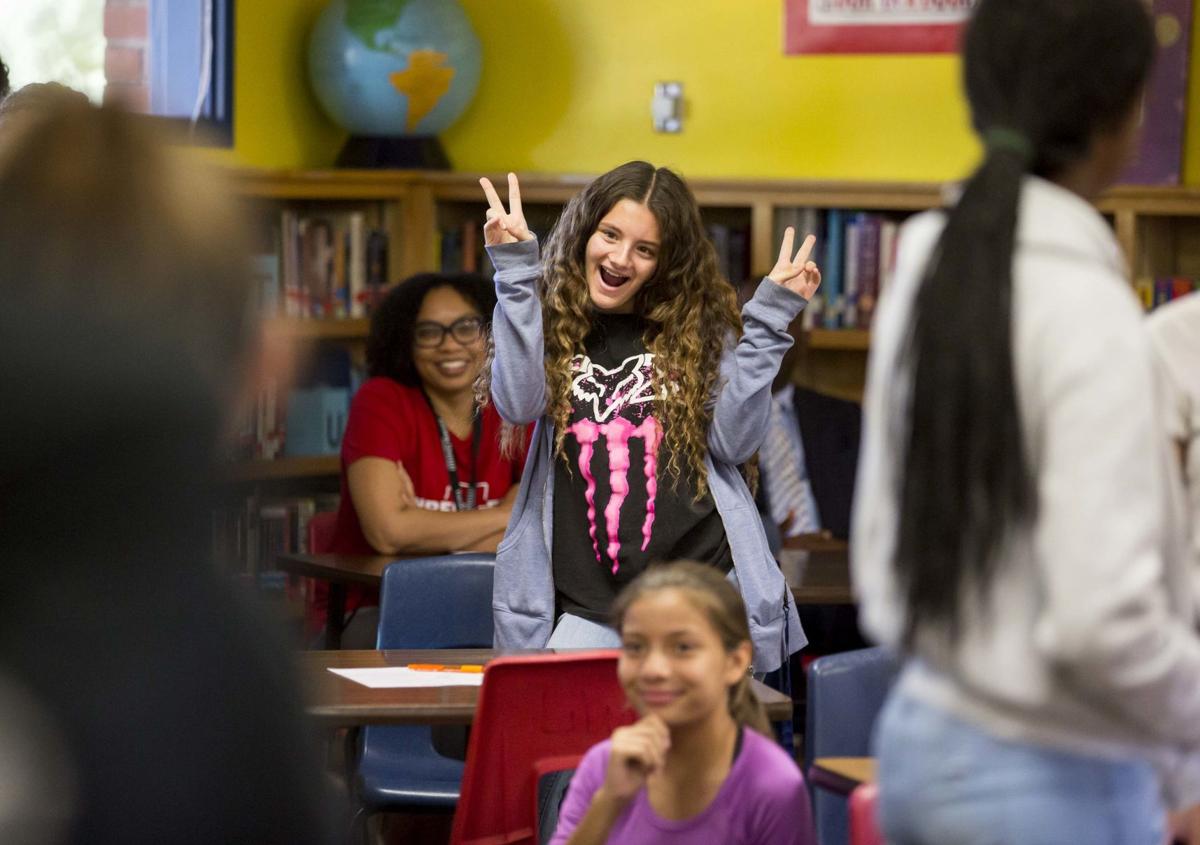 Eighth-grader Evelyn Albee strikes a pose during the introductory meeting for STEM Girls Rock! The club hopes to get more girls to pursue STEM-related careers. 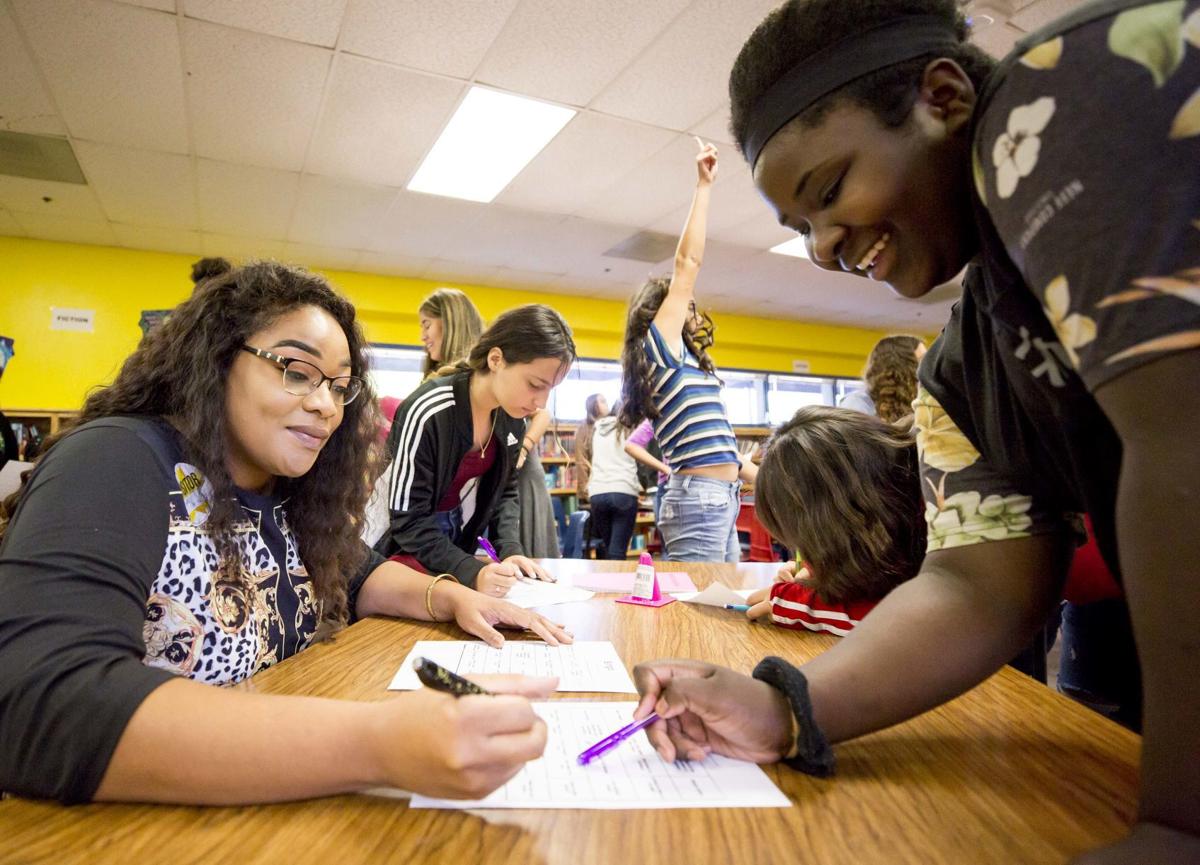 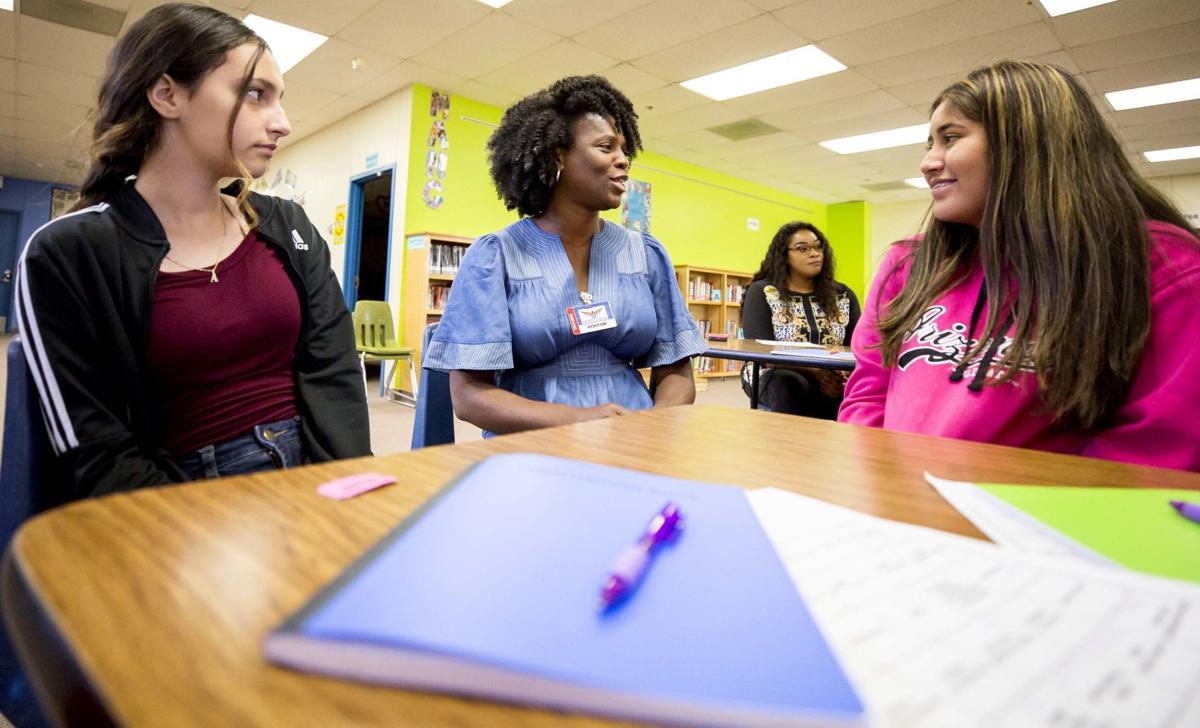 When she was in middle school, Alyssa Charlow turned to her teacher for help in math class.

Charlow, a configuration analyst for a government contractor, told her story to a room full of girls at Booth-Fickett Math/Science Magnet School. She imitated her mother’s reaction, complete with an Alabama drawl: "Baby, we’re gonna get a tutor 'cause you are good enough."

Charlow spoke at the inaugural meeting of the all-girl science, technology, engineering and math club, STEM Girls Rock! Booth-Fickett principal Demetra Baxter-Oliver launched the club after talking with a student about her AzMERIT scores. The student told her girls just aren’t good at math. "Not on my watch," Baxter-Oliver said. "You can do this."

Baxter-Oliver invited 30 girls in sixth, seventh and eighth grades based on their STEM focus, AzMERIT scores and teacher recommendations to participate in this club, the first of its kind at TUSD. The club is helping girls with an interest in STEM obtain the plans, confidence, role models and support to achieve their goals.

Charlow spoke on a panel of four African-American women who all have careers in a STEM field: a configuration analyst, an aerospace engineer, a manager in information technology and a mechanical engineer.

The women shared their experiences with the room of girls, mostly students of color, about how they overcame messaging from their childhood discouraging them from STEM fields.

There is a persistent gender gap in STEM careers. Although women make up about half the U.S. workforce and are also about half of the college-educated workforce, they hold less than 25% of STEM jobs, a statistic that has persisted since the turn of the century, according to a 2011 U.S. Department of Commerce report.

A lack of female role models and gender stereotyping contributed to the lack of women in STEM fields, the report found.

Eighth-grader Ashley Jacobo said she hopes to gain the confidence to go into a male-dominated field. She said boys are encouraged in STEM while girls are more encouraged in English language arts. She feels like once the boys understand a topic in her STEM classes, the teacher is already moving on without seeing if the girls are keeping up.

She and two of her friends in the club, also eighth-graders, said they feel discouraged to pursue a career in STEM, partially because of the overwhelming emphasis on girls’ looks rather than their minds.

Everyone tells the girls they should be confident, but that’s hard to do when they’re always being put down for not looking a certain way, Cydney Vega said.

"This club might change something for me," she said. "Being picked makes me feel confident."

Arianna Casillas said she hopes the club "will show girls to love themselves — that they don’t need somebody right by their side all the way. They can help themselves."

All of the panelists said they were supported by their mothers and grandmothers, who insisted they could fulfill their dreams.

Speaker Candace Ellerbe grew up a "pint-size girl ... with one pair of dress shoes, a feisty attitude and a grandmother who slept with one eye open," the principal said, introducing her to the room.

A first-generation college graduate, Ellerbe said she always knew she would go to college. Her grandmother, who raised her on a $672-a-month pension, would accept nothing less.

Ellerbe noticed when she finished college that there weren’t many women in IT and almost none developing or testing software. She told the girls the field is dominated by white men, with women of color holding the fewest jobs in the field.

"We need you to be in information technology because you matter as well," she said. "You are smart. You are intelligent. You can get this done. It’s not hard. It’s very easy if you enjoy it. I enjoy it — and the check is nice, too."

Women in STEM fields make 33% more money than peers in non-STEM fields, and the gender wage gap is smaller, the U.S. Department of Commerce report on women in STEM said.

Women underrepresented in STEM "leaves an untapped opportunity to expand STEM employment in the United States, even as there is wide agreement that the nation must do more to improve its competitiveness," the report also said.

Before becoming an aerospace engineer at NASA and going on to become the first female senior executive overseeing safety to propulsion systems and the first African-American woman appointed as director of safety assurance overseeing shuttle launches, speaker Amanda Goodson remembers being surrounded by boys in eighth-grade algebra who thought she couldn’t make it.

The club’s next meeting, on Nov. 17, will include a vision and dream board session. A vision board is a collage with images and words that represent life goals.

Goodson said the vision board will help the girls get in touch with their passions, build self-esteem and create a plan to achieve their goals.

After the second meeting, the club will meet monthly. Baxter-Oliver said she hopes the club can grow and that interested girls are welcome to join.

The principal told them that in order to create change they need to have a plan. She pointed to the blank notebooks in front of each girl.

"Today starts your step of making your plan to be one of the most powerful STEM women that this place has ever seen," Baxter-Oliver said.

Note: This story was originally published in the Arizona Daily Star on Oct. 21, 2019.

Unstoppable women: These 3 Tucson-area teachers will make you thankful for the educators in your life

There are 15 applicants to fill the open seat on the Tucson Unified governing board, vacant since board member Mark Stegeman resigned midterm …