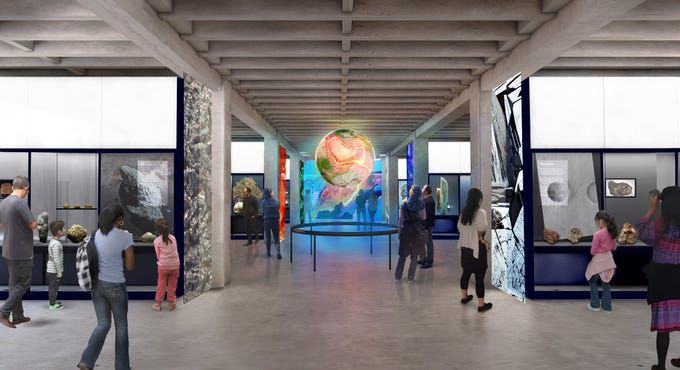 The Mineral Evolution Gallery at the UA Alfie Norville Gem and Mineral Museum will focus on how the solar system and minerals have evolved over time. 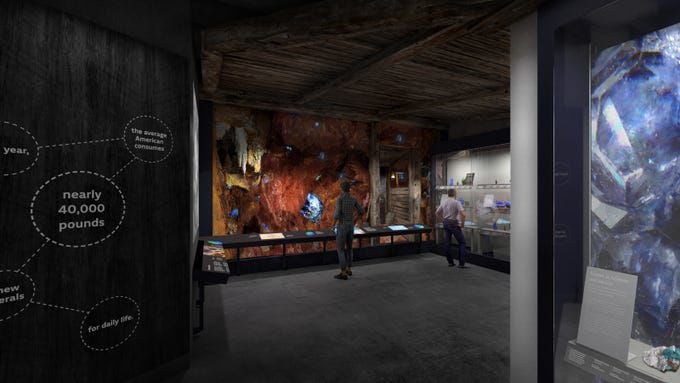 A rendering of Bisbee-Azurite stope inside the University of Arizona Alfie Norvill Gem and Mineral Museum. 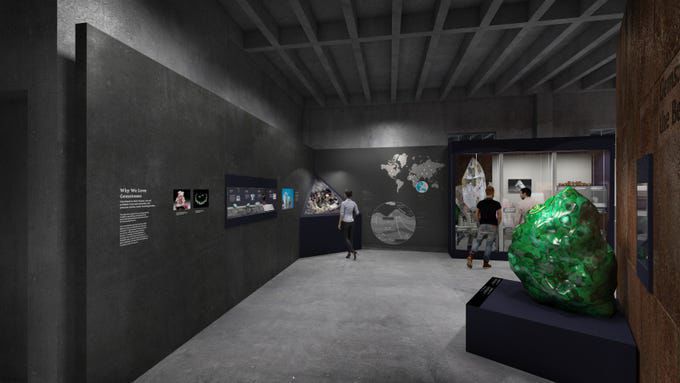 Rendering of the Gemstone Gallery inside of the University of Arizona Alfie Norville Gem and Mineral Museum. 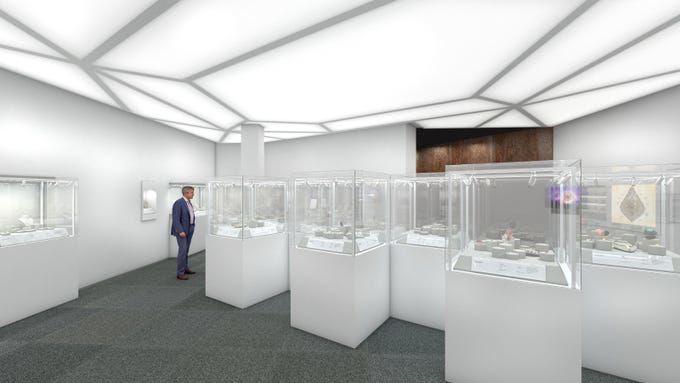 Rendering of the Treasury inside of the University of Arizona Alfie Norville Gem and Mineral Museum.

From turquoise mined by indigenous people in Arizona to rocks found on asteroids within the solar system, minerals tell a story.

With its expanded space and upgraded collection, the University of Arizona Gem and Mineral Museum aims to tell this story, bringing the Tucson community together to learn about the influence that minerals have on the planet, the environment and life itself.

The museum, which will now be called the UA Alfie Norville Gem and Mineral Museum, is set to open by fall 2020 and will be located in the historic Pima County Courthouse in the heart of downtown. The courthouse, which is undergoing renovations, will also be the new home to Visit Tucson and Pima County’s regional visitor center.

Currently located in the basement of the UA’s Flandrau Science Center and Planetarium, the UA Gem and Mineral Museum will upgrade from 3,500 square feet to over 11,000 square feet in the new space.

According to museum manager Eric Fritz, the bigger space provides an opportunity for the museum to expand its reach and to add more to its collection.

“Partnering with Pima County has been a fantastic opportunity,” he said. “We’re going to be right in the heart of downtown Tucson, which is undergoing an amazing revitalization, and have a chance to pull the whole university and local community together. This is also exciting because during the Gem and Mineral Show for three weeks a year, we can show off to the whole world how great this actually is.”

In addition to the public museum space, an additional 8,000 square feet on the lower level of the courthouse will be dedicated to a library, research lab, mineralogy lab and community classroom.

“We’ll have work stations where we can do seminars and presentations and teach people about minerals and gemology,” Fritz said. “So, it’s really an exciting space.”

Since the lease between the UA and Pima County was approved by the Arizona Board of Regents in April 2018, the cost of the project has grown from $9.65 million to $13.5 million. According to a lease amendment submitted to ABOR in August, the increase is due to unprecedented escalation in costs for labor and materials as well as increases in scope because of the unique nature of designing and building inside a culturally significant building.

The changes were approved by ABOR on Aug. 22.

“This is a very reasonable amount for the scope of both levels of the project including interactives, state-of-the-art exhibits, research lab, community space and high-density storage,” Fritz said.

Fritz and Robert Downs, curator of the museum, said they expect to receive enough donations to cover the full cost of the project. $3.3 million in gifts have been committed to date, including a large initial donation from Allan Norville, local businessman and founder of the GJX Gem Show, on behalf of his wife, Alfie, who died in 2015.

The county has also agreed to cover the first $7.5 million spent on the project, which the UA will have to pay back with interest over a five-year period.

Plans for the museum space

The unique space will not only allow museum leaders to showcase more materials, but also provide a more interactive experience for visitors, Fritz said. While traditional mineral museums are typically filled with simple display cases with minerals inside, the new space will have immersive activities, graphics and videos.

The first exhibit, the Mineral Evolution Gallery, will focus on how the solar system and minerals have co-evolved over time.

“We started with 60 minerals on Earth. Any rocky planet in our solar system, any meteorite or asteroid basically has those same 60 minerals. On Earth, we now have 5,500 minerals,” Fritz said, “How did this happen? We’ve had this sort of interaction of life and oxygen and changing minerals. It’s sort of been a side-by-side progression for both life and minerals and nobody’s ever really told that story in the same way.”

The next exhibit, the Arizona and Mexico gallery, will feature the unique mineralogy of the area, highlighting Arizona’s mining roots and turquoise trading. One section of the exhibit will be modeled after a cave within the Copper Queen Mine in Bisbee and will showcase some of the minerals that were mined there while it was still in operation.

“We’re telling the story of mining and how the copper mine in Bisbee basically set up the United States for the Industrial Revolution,” Fritz said. “Without that, we wouldn’t have had power and telecommunications. So, it really was pivotal for our advancement in life and that was based right here in Arizona. They were mining copper before we were even a state and the copper helped make this the last contiguous state in the U.S.”

In the Crystal Lab, visitors will have a chance to grow their own crystal, either a quartz, a sapphire or a diamond, and they can alter the conditions to cause a change in color.

“For example, if you start with a clear quartz and add a little bit of iron, you’ll end up with amethyst,” Fritz said. “So, they’ll actually learn while doing something pretty cool.”

The last exhibit, the Gemstone Gallery and Treasury, will showcase minerals that have been manipulated by humans and turned into jewelry, carvings and works of art.

“This section of the museum shows how humans, for many thousands of years, have appreciated the beauty of minerals and it’s a great opportunity for us because we’ve never had a gem museum as part of our collection,” Fritz said.

The treasury, which is a vault that will sit in the center of the gallery, will display collections of jewelry and gemstones from all over the world. The first collection to be showcased in the treasury will be the Somewhere in the Rainbow gem and jewelry collection from Phoenix.

With support from the Gemological Institute of America and the American Gem Trade Association, the UA’s Department of Geosciences is seeking to expand its emphasis on gem science and education.

A $2 million endowed chair in gem science, funded by The RealReal, will be the foundation for a course of study that will prepare students for careers in the gem and mineral industry. The university is still searching for a geoscientist to fill the seat.

The upgraded mineral museum will play a large part in the new gem sciences track, providing opportunities for students to study in the museum’s labs and classrooms.

“The hope is that the classroom in the lower level will become the gem science classroom for students,” Fritz said.

Museum leaders are also hoping to make these areas available to local school groups and civic organizations as a way to increase the interest in mineralogy throughout the community.

“We’re coming at it from a different direction,” Fritz said. “People of all interests will get something out of it.”

Note: Story was originally published by the Arizona Daily Star on Oct. 14, 2019.

32 free things to do in Tucson this October

October is full of festivities and Halloween fun. Save your money and check out the free mov…

October is here, let the festivities begin! This giant list is divided into two parts: this …

Unstoppable women: These 3 Tucson-area teachers will make you thankful for the educators in your life

Unstoppable women: These 3 astronomy lovers will inspire you to reach for the stars

STEM Girls Rock! was launched by principal at Booth-Fickett Principal Demetra Baxter-Oliver after talking with a student about her test scores.

Jasmine joined the Star in 2019. With a master’s degree in journalism, Jasmine served in a variety of leadership roles, including The Daily Wildcat's editor-in-chief. She was also named Outstanding Newsperson of the Year by the UA School of Journalism.