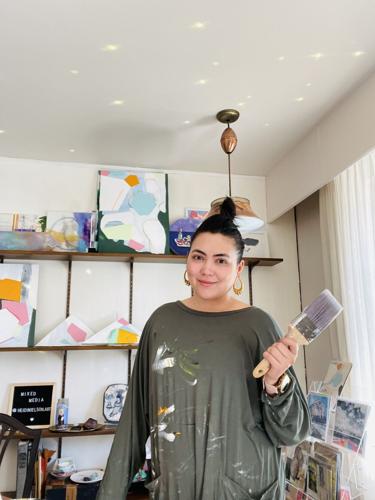 Heidi Nielson poses at her in-home studio. The Mesa, Arizona native creates art inspired by her time outdoors in the Sonoran Desert. 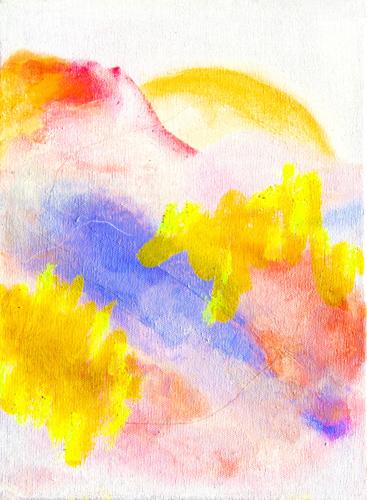 A painting included in the "Desert Dreamland" collection by local artist and lawyer, Heidi Nielson. 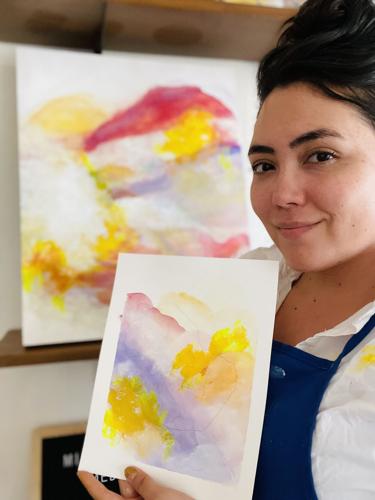 Artist Heidi Nielson poses with a piece of her "Desert Dreamland" collection. The collection is still in progress.

For Heidi Nielson, the Sonoran Desert has always been a source of inspiration.

So much so that the 33-year-old spent nearly a decade trying to find her way back to the Old Pueblo for good after living in Washington, D.C. for the last eight years.

“It's sort of something I can't really articulate, I just always was very drawn to it (Tucson) and in particular, like the authenticity of Tucson,” Nielson says, who is originally from Mesa, Arizona. “I always felt like Phoenix wanted to pretend it wasn't in the desert. And I love that Tucson just embraces it wholeheartedly. I think that's really why I wanted to come back, to have space in both a literal and a spiritual sense.”

After receiving a degree in creative writing from Arizona State University, Nielson spent time with AmeriCorps in D.C., where she became inspired to become a lawyer and make change through policy.

Nielson made her permanent cross-country move to D.C. after graduating from the University of Arizona’s James E. Rogers College of Law in 2015. During her time in D.C., she worked as a full-time lawyer focusing on “a range of issues,” including immigration and oversight of the federal government, she says.

As someone who experienced years of anxiety and depression, Nielson picked up art as a healthier coping outlet after graduating from law school. While in D.C., she added part-time artist to her resume.

But now that she made her way back to Tucson seven months ago, her career path has taken a slight turn: she’s now a part-time lawyer and considers herself more of a full-time artist, depending on the week, she says.

“I didn't set out to become an artist or anything,” Nielson says. “I always thought I would just be a lawyer 100% but I just really loved it so much and love sharing it and meeting other artists that it kind of grew into a side business, but now it actually takes up more of my time and I am now more like a part-time lawyer. So it's been another journey that was completely unplanned, like going to law school.”

Finding her place in art and life

Nielson’s roots run deep and spread widely throughout her art.

She’s a fourth-generation Japanese-American, biracial, bisexual and an ex-Mormon, according to her website.

All these elements have helped inspire her body of work by representing the “things we carry — the memories, identities, places, family baggage and small moments of joy,” she writes on her website.

When she first started creating art, Nielson used to address these elements in a more literal sense through illustrations, but as time has passed, she says she’s gotten more comfortable being in an “in-between place,” and represents the elements with a bit of ambiguity.

“Being a bit of a chameleon, I think it used to be something that confused me a lot as a kid,” she says. “But as I've gotten older, it really has been something I've embraced as a person and also in my art, just being like, OK with the discomfort of not going with it, not knowing where I'm going with a painting, or not knowing where this series is going to end up and just being willing to start it anyway. That's probably like the deepest way it shows up.”

Although Nielson is a mixed media artist, she is particularly drawn to painting, including watercolor painting, which she says allows her to break free of perfectionism by creating “a happy accident” when the delicate watercolor paint occasionally blobs together.

Her latest obsession is $3 paint sticks that she stumbled upon in the Crayola aisle at an art store.

“When I'm stuck with a painting, I often buy a new medium that I've never worked with before,” she says.

To stay inspired, Nielson often takes hikes throughout Tucson, especially on Tumamoc Hill, where she snaps photos of plants and our undeniably stunning sunsets that she tapes to her mood board. While at her in-home studio, she lights Tucson-inspired candles, such as a monsoon-scented candle, looks to her mood board and paints small studies that later inspire larger projects.

Nielson’s current work in progress, “Desert Dreamland,” is her first big body of abstract art since moving back to Tucson last year. While the project embraces the beauty of the Sonoran Desert and everything that drew her back to the Old Pueblo, the project took a slight change in direction when Nielson recently experienced a miscarriage.

“I was pregnant right when I started making this series,” she says. “And so I have a lot of bold colors and a lot of just, like, joy from that time that I think is reflected in the energy from that time. And it's also a series of soul evolving that I'm still working on after having had a miscarriage about a month and a half ago... And it's actually been a really helpful thing for me to be able to come back and to add on to not just, like, the excitement, the beginning, but more like an intentional sort of goodbye.”

She recalls leaving the doctor’s office that day, her husband Matt turning toward her and asking, “Shall we go get more of your painting stuff?” He knew art was an important outlet for her.

“My art in general has always been so central to my mental health kind of practice and just maintaining a good balance in my life and with anxiety,” Nielson says. “So it's been really helpful for me throughout my whole life to have this, like, art practice to come back to and for this, in particular, has been really helpful for me to just be able to, you know, celebrate. Even when my time was short, I was able to carry this baby for a little bit.”

Despite Nielson’s personal work taking on a fine art style, she also owns and operates Ohei Studio, which focuses on illustrations.

Creating illustrations is something she didn’t want to stop doing when she pivoted more of her attention to the fine art side of things, she says.

“I have a lot of series of work in that studio that celebrate, you know, being a female lawyer, and in particular, being a woman of color,” she says. “And so I just wanted to continue it.”

Some of the signature pieces from her studio include illustrated prints of leading historical women such as Ruth Bader Ginsburg and NASA mathematician Katherine Johnson. She also created a new take on the iconic character Elle Woods from the movie “Legally Blonde,” that showcases the character as women of color.

Nielson’s illustrated art (and a few of her fine art pieces) can be found on her website or on her Etsy shop.

The name “Ohei,” pronounced “oh hey,” was inspired by Nielson’s first name. While living in D.C., her old handle used to be “Desert 2 District Design” as a way to bring the Southwest to the east coast. But as she moved to Tucson and once again became a desert dweller, she came up with the name “Ohei.”

“I wanted it to be sort of like a fun and whimsical name. Since my art, especially my illustration work, is just so, like, fun and whimsical, I try to keep it light, even if I'm talking about more serious things like mental health,” she says.

As Nielson finds her footing in the fine art and illustration world, she hopes to become more connected with Tucson’s art community and aspires to have her work displayed in a local art gallery, she says.

“I would love for it (my art) to bring to Tucson just, like, a sense of pride of where we live. This pride of this beautiful place that we live in, even if other people don't appreciate it as much as we do,” Nielson says. “So I would love for it to be, not just like on a personal level, but on a more macro-level, like a celebration of this beautiful desert that we live in. (On a micro-level), I want to embrace people as they are, where they are. So, for me, that's like me embracing all of my multifaceted sides and also embracing being here in this time, in this moment.”

The Tucson maker community continues to expand with a new '70s botanical-inspired artist and creator shop in downtown Tucson. Arizona Poppy held its grand opening on Saturday, May 21.

Think little free libraries, but with art: Tucson is home to a tiny free art gallery

The Museum of Contemporary Art in Tucson, Arizona, is now home to a tiny free art gallery dubbed Mini MOCA, where passersby can take and leave miniature pieces of art at no cost.

4 Tucson restaurants where you can see local art

Check out these Tucson, Arizona restaurants and bars where the art on their walls are just as satisfying as the food on their menus.

A few of Tucson's iconic neon signs have lost their glow. Here's why.

A look into why some of Tucson's most iconic neon signs are in a current state of disrepair.

Yes, disco ball saguaros are a thing. This local artist makes them.

A local artist is creating handmade disco ball art inspired by the Sonoran Desert's saguaro cacti as an homage to her Tucson roots.