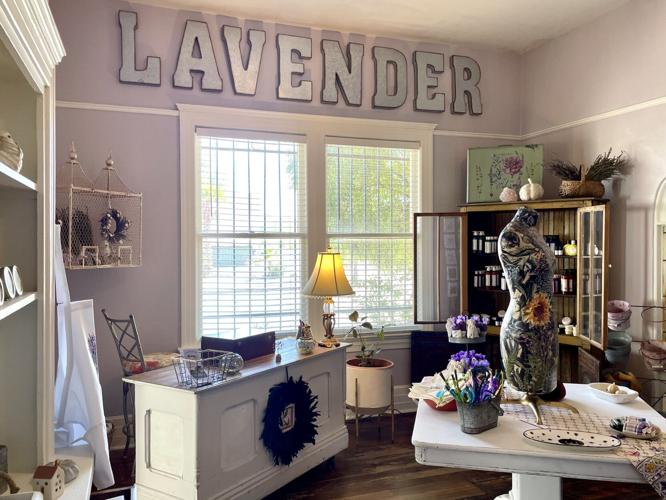 An inside look of The Lavender Manor, Tucson's newest lavender-centric shop, in Tucson, Arizona. 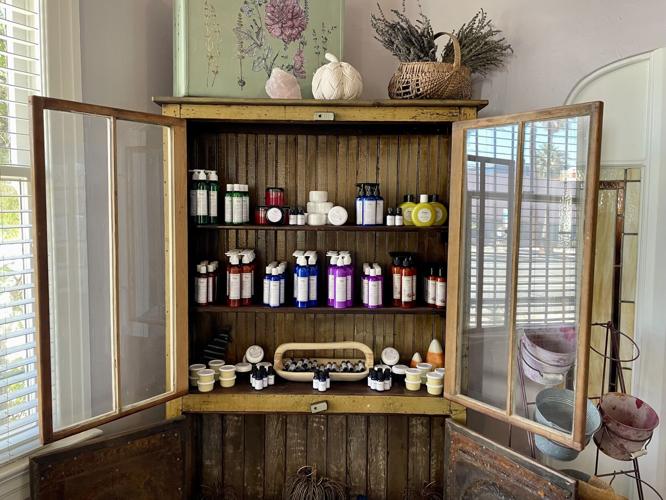 One of the product shelves at The Lavender Manor in Tucson, Arizona. 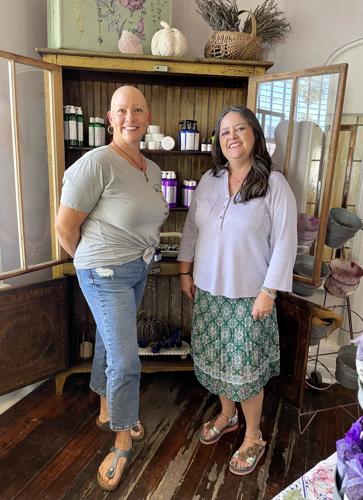 The Lavender Manor manager, Kim Marceil, left, and owner Carolyn Blair, right, pose for a photo inside the shop on Oct. 19, 2022. 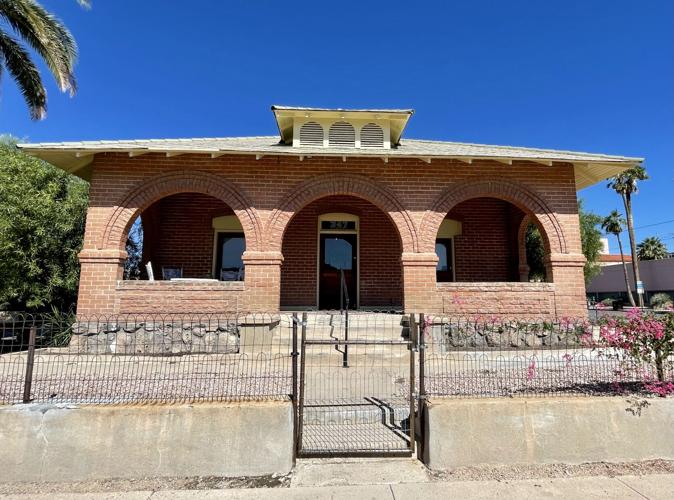 The outside of The Lavender Manor located at 347 E. Fourth St. in Tucson, Arizona. 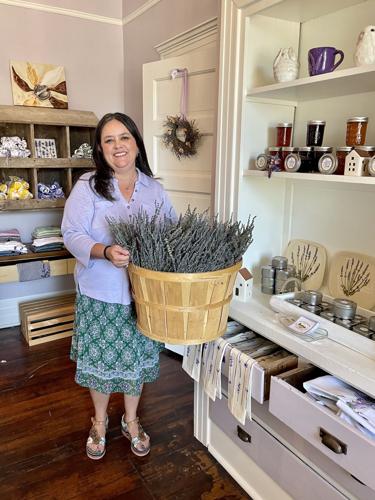 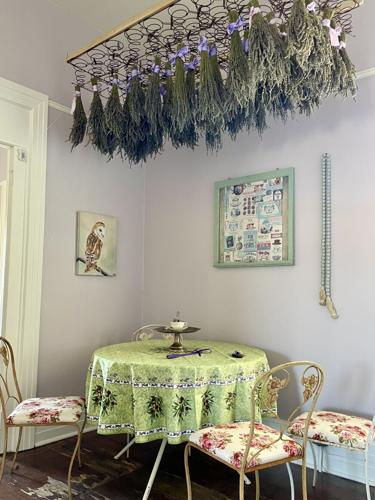 Fresh lavender bundles hang from the ceiling in The Lavender Manor's tea room in Tucson, Arizona. 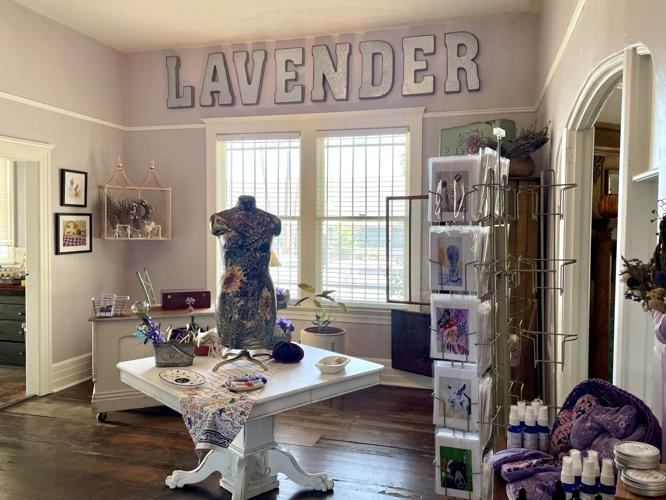 The inside of The Lavender Manor in Tucson, Arizona.

A new shop opened on Historic Fourth Avenue today and it may be, dare we say, the best-smelling shop on the block.

The Lavender Manor located in a historic house on the northern end of Fourth Avenue at 347 E. Fourth St. is the new home for all things lavender in Tucson.

The shop carries homemade products like soaps, lotions, lip balms, essential oils and mists that are all infused with locally grown, fresh lavender from the shop’s farm Life Under the Oaks in Oracle, about 37 miles north of downtown Tucson.

Carolyn Blair and her family have owned the farm for the last decade and began planting lavender there in 2018. Since Life Under the Oaks opened, the Oracle-based farm has become a must-see destination for Southern Arizonans.

After nearly five years of lavender farming and lavender-based workshops and events, Blair decided it was time to bring a taste of the farm down to Tucson.

“I'm super excited. A little nervous,” Blair said. “Because I'm hoping that people are gonna love it as much as they love the farm. You know, it's gonna be a little different clientele that we'll have here. But still, we have lots of people that come from Tucson up to the farm. So I'm hopeful that everybody's going to enjoy it and that it's something different, a different experience.”

Like the farm, The Lavender Manor will also host lavender-centric events like enjoying homemade lavender tea in the manor’s tea room and lavender wreath workshops on the back porch. Blair hopes to add yoga events at the manor, too.

While the manor is owned by the Blairs, it will be managed by Life Under the Oaks worker and friend, Kim Marceil.

“Working with Carolyn has just been such a calming and eye-opening experience,” she said. “(We’re) just looking forward to, you know, opening for the community, bringing people in with all of our natural products and then really starting to educate and share with everyone around us what we do.”

“We're bringing like a little little bit of the farm to Tucson except for the farm animals,” Blair said.

'It's a unique destination'

Upon entering The Lavender Manor, the slightly floral and earthy scent of fresh lavender is the first thing that welcomes you.

The walls of the historic 1903 house are painted in a shade of lavender and the decor is reminiscent of an old farmhouse. There’s even a “Farmer John” room — complete with a recliner, TV and an original fireplace with stunning green tiles — for all the gentlemen to relax in while they wait for their significant others.

The setup of the manor makes you feel like you’re in a home rather than a business — a feeling that was important to Blair.

“People are always asking, ‘When are you going to have product in Tucson?’ and ‘We wish you were closer’ and that kind of thing,” she said. “And so we thought, ‘Well, why don't we open a location in Tucson?’ but I needed the right location, I wanted something that would fit with, you know, the farm style. And this property came up and it's perfect because we have a yard and it's like a house setting. … It just felt like I was drawn to it and a part of it. I grew up in a house that looks sort of like this. So it's kind of like nostalgic to me. But I just thought it's just perfect for what I wanted to do.”

Blair was initially inspired to start the Oracle lavender farm after she took a family vacation to Washington, the state with the most lavender farms, and saw fresh lavender for the first time in her life.

“I just fell in love with that,” she said. “And I was like, you know, what a dream to have a lavender farm. And I kind of, like, always had that in the back of my mind, but it wasn't the right time.”

After her daughter moved out, the Blairs decided to convert a horse-racing arena, where her daughter used to barrel race on their farm, into a lavender farm.

“We made it bigger and got our plants,” Blair said. “And I tell everyone, people in Oracle thought we were crazy because it's hard to grow anything there because there's so much wildlife, they just eat everything. But I knew that the animals don't like lavender, like the deer will go in there and the bunnies and they'll nibble at it and leave it alone. So we have it fenced off because of the javelinas, not that they'll eat the lavender, but they'll dig at the water lines.”

Although the Blairs weren’t expecting a good harvest for a couple of years after the initial planting, they were shocked when the first summer harvest rolled around and the lavender plants bloomed “like crazy,” Blair said.

From there, the popularity of the farm took off with Southern Arizonans.

So much so that they have since opened a boutique in Oracle, the new shop in Tucson, and have plans to open another shop in Oracle. Despite having the new location in Tucson, Blair hopes that people will still feel inspired to make the trip up to the farm in Oracle.

“We're the only lavender farm in Southern Arizona that I know of,” Blair said. “And definitely the only one that does all the things that we do for all events. So I would say the same thing about the shop. It's a unique destination. It's a place you can come by yourself or with friends or with family. So it's just a new offering to Tucson.”

What: The Lavender Manor.

Southern Arizona day trip: 15 things to do and eat in Oracle

If you're planning a trip to Biosphere 2 or the lavender farm in the Oracle and Catalina area (north of Tucson, Arizona), here are some things to do and eat while you're there. Try delicious ice cream, go stargazing, get a bird's-eye view on a zipline and more.

A Barbie truck is coming to Tucson this weekend. Here's where to snag retro merch. ✨

The Malibu Barbie Truck Tour is stopping by La Encantada in Tucson, Arizona on Saturday, Oct. 22. The tour will bring exclusive retro Barbie merch that you can only find at this event!

We went to a spooky séance at Hotel Congress. Here’s what happened. 👻

We're launching a new Tucson newsletter. Here's everything you need to know. 🎉

#ThisIsTucson is launching a new newsletter on Sept. 30! The #ThisIsTucson Rewind newsletter provides a monthly recap of all things Tucson life and includes exclusive content you can only find in the newsletter.

The pumpkin patch at Apple Annie's is officially open 🎃

Fall is back in Southern Arizona! Check out Apple Annie's pumpkin celebration and corn maze in Willcox, about 80 miles east of Tucson.

Your guide to Día de los Muertos: Origins, traditions, what it means to the Tucson community

An explainer of the traditional Mexican holiday, Día de los Muertos, also known as Day of the Dead. Take a dive into the history of the holiday, its traditions and what it means in Tucson, Arizona.

The owners behind Rozet Nursery on Tucson's east side have a weekly watering playlist featuring music from across the globe. The nursery hopes to create a connection among the community, plants and music.

Get permanent jewelry, from bracelets to necklaces, at this new Tucson boutique ✨