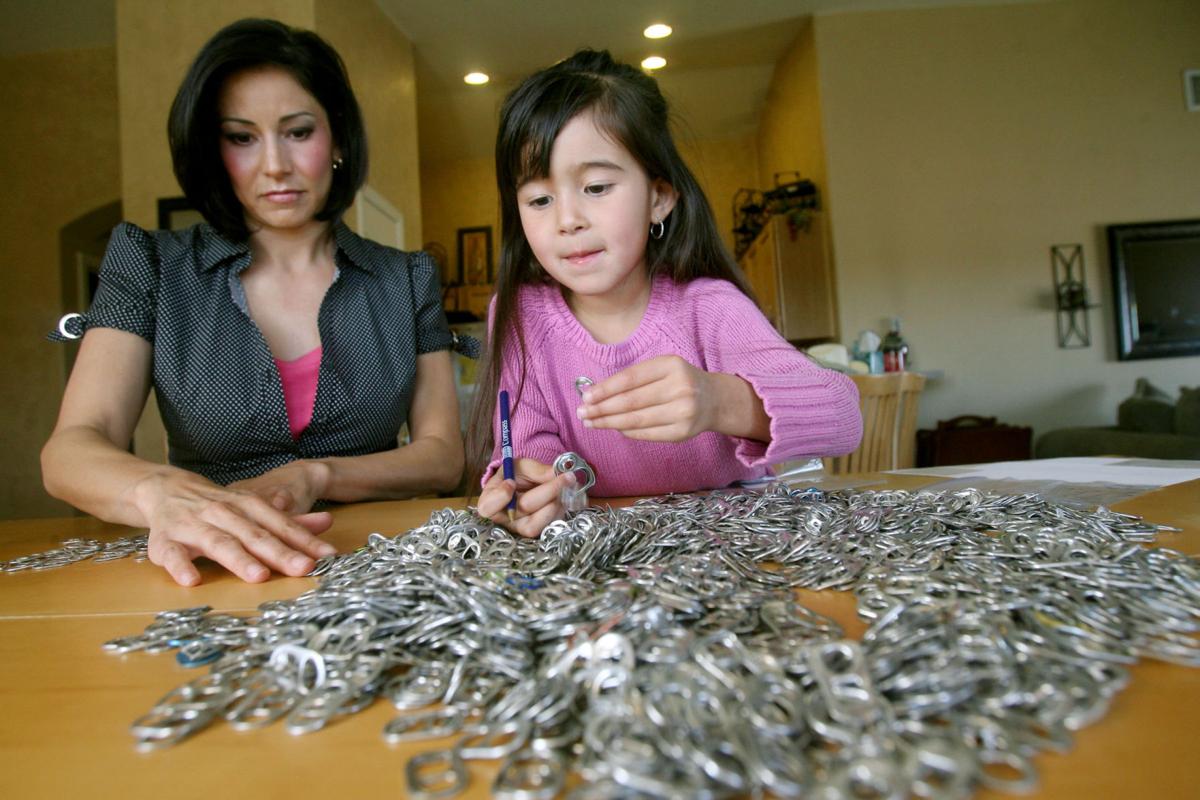 Annalise Lujan, then 4, has been sorting pop-tabs for the Ronald McDonald House with her mom, Maryann Estrada-Lujan, since 2010 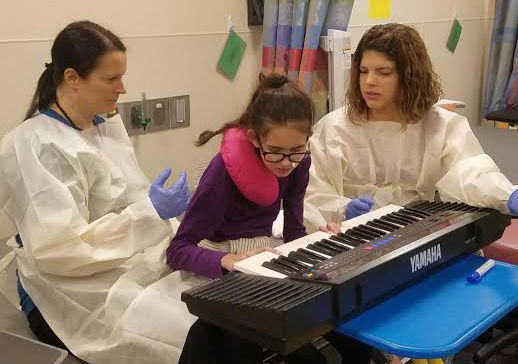 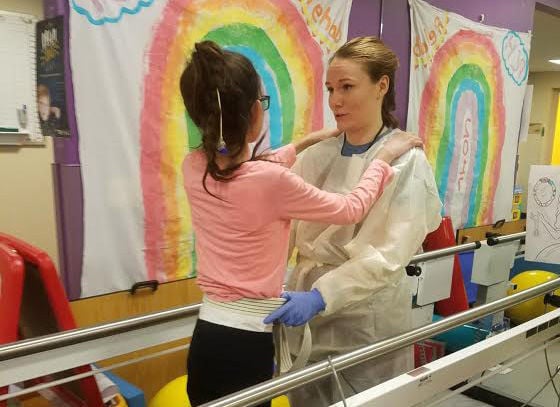 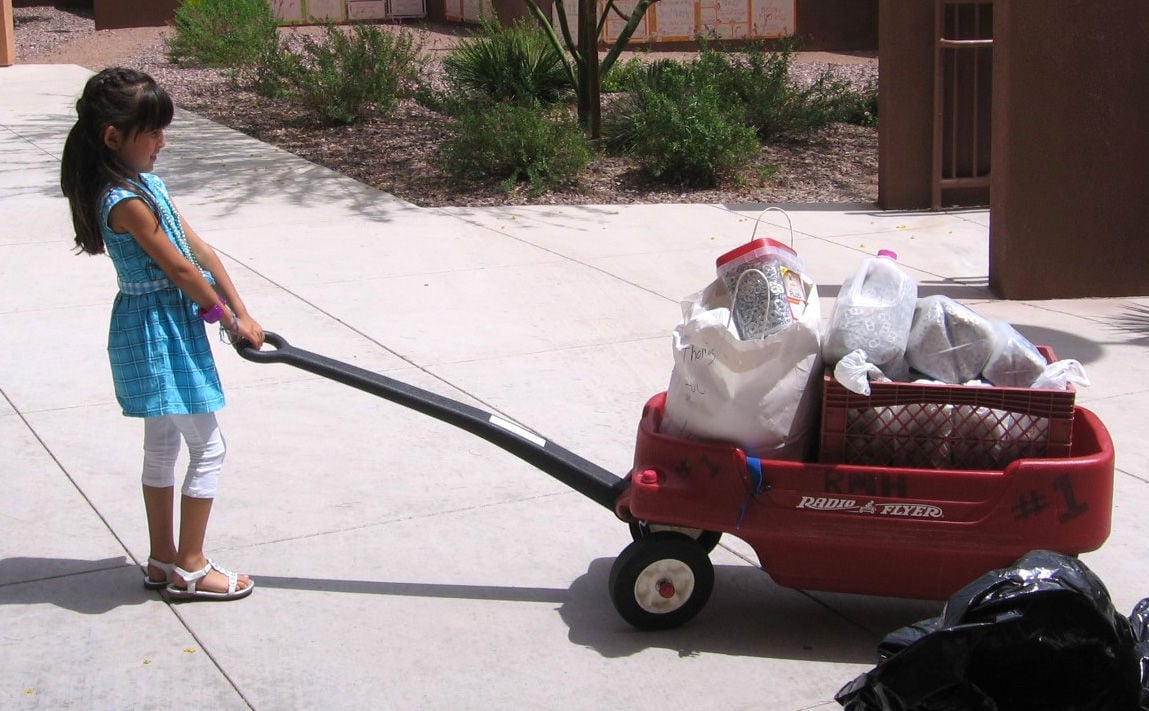 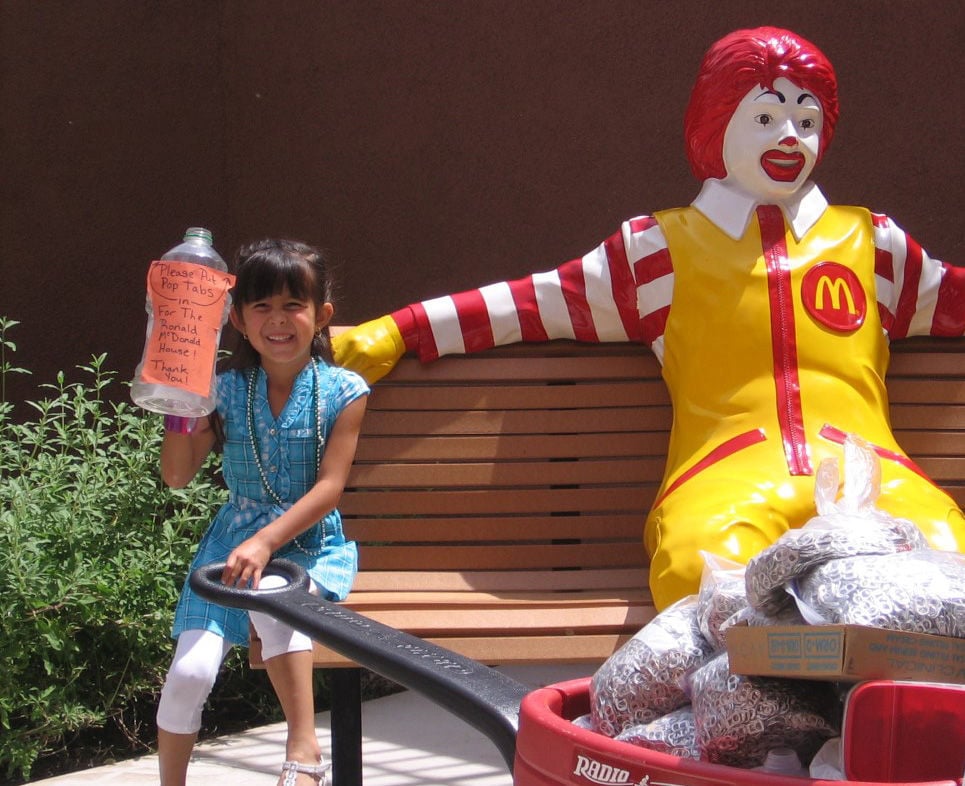 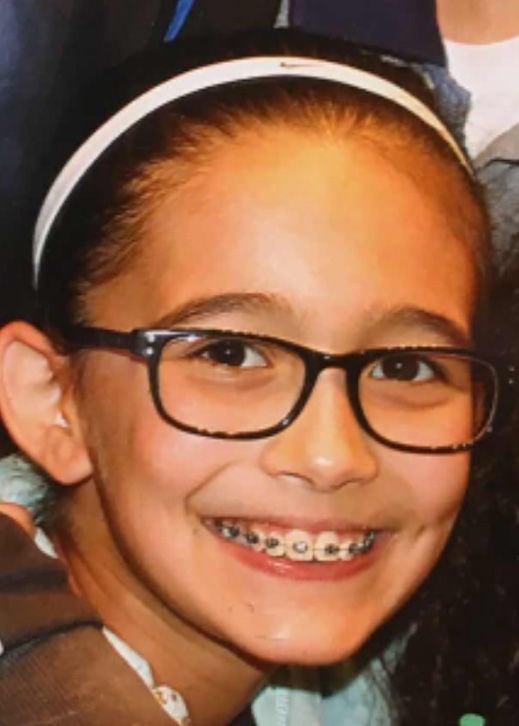 Annalise Lujan started collecting pop tabs for the Ronald McDonald House at the age of 4.

She wanted to be a doctor someday, or maybe a gymnast. She definitely wanted to help people.

"She is just a giving soul and loves to help others," says Maryann Estrada-Lujan, Annalise's mother. "She wanted to be a doctor for the Ronald McDonald House and work for free. She has just always been a giving person."

On April 2, Annalise, now 12, vomited before a competition with her Tumbleweeds Gymnastics team. She insisted on competing, but threw up again during the third event, her mother says. She said she felt better after that, but during the fourth and final event, she couldn't walk. Her parents took her to the hospital.

On April 3, she had her first seizure.

She turned 12 on April 18, and on April 21 was medevaced to Phoenix Children's Hospital.

The cause of the syndrome is still mystery. Some people believe it is initiated by an infection affecting the immune system or a fever triggering a genetic response in the body. But those are just two prevailing opinions, says Dr. Eric Marsh, assistant professor of neurology and pediatrics at the University of Pennsylvania's Perelman School of Medicine and the Children's Hospital of Philadelphia. Marsh has been treating the few patients who have come down with the rare form of epilepsy since 2000.

But there is hope for Annalise because on May 8, she woke up.

The Arizona Daily Star first wrote about Annalise in 2010 when her uncle's pop tab collection inspired the 4-year-old to start her own. About a year later, Annalise appeared in the paper again after deciding to grow out her hair for Locks of Love.

"I want them to feel better," she told the Star in 2010 when asked about her pop tab collection.

That first year, she donated about 70,000 pop tabs to the Ronald McDonald House in Tucson. She has continued to collect the tabs and donate them each year on her birthday, averaging about 60 pounds of pop tabs each year, Estrada-Lujan estimates.

"She got a ribbon and put on pop tab on it and wore it as a bracelet, and people would ask, 'Why are you wearing that?' and she would say, 'I'm collecting it for sick kids at the Ronald McDonald House,'" Estrada-Lujan says. "Every year for her birthday, she donates her tabs."

The nonprofit's website says that "1,267 pop tabs make one pound," and "150 pounds helps one family stay the night at the house."

And even in Phoenix, Annalise's collection continued.

"In ICU they heard her story so the nurses started a little jar and are collecting," Estrada-Lujan says. "She is still collecting for the Ronald McDonald House and she has been asleep."

That is bittersweet for the family, who hasn't been able to make use of the house in Phoenix.

Annalise tested positive for MRSA, an infection that is caused by staph bacteria and resistant to most antibiotics, according to Mayo Clinic.

Because many of the kids who do stay at the Ronald McDonald Houses have vulnerable immune systems, the nonprofit "has a very strict policy relating to infectious diseases to ensure, as best we can, the health, welfare, safety and comfort of the families staying at the Ronald McDonald House..." writes Nancy Roach, the executive director of Ronald McDonald Charities of Phoenix in a prepared statement. "While we never want to turn anyone away, there are, unfortunately, times when we have to make very difficult decisions like this one."

Estrada-Lujan has been sleeping on the couch in her daughter's room and her husband has been commuting every few days while their 13-year-old son finished school.

"Who knew she would be advocating for them, and now we're going to need to use those services?" Estrada-Lujan says.

Annalise went to the hospital the first time after her gymnastics competition in early April.

"She competed with us all season and when she got to state this year is when she got sick," says Courtney Jolly, Annalise's coach and owner of Tumbleweeds Gymnastics. "We all thought she had a stomach bug because she threw up, and that's when she went to the hospital."

Banner - University Medical Center Tucson confirmed the stomach virus theory and sent Annalise home with some medication. After the first seizure, the hospital attributed it to dehydration, hooked Annalise up to an IV and sent her home with additional medication, Estrada-Lujan says.

When Annalise returned to the hospital after the second seizure, they kept her.

"She had continuous seizures, and they weren't able to break status even after several attempts with medications," Estrada-Lujan says. "They put her into a medically-induced coma to save her brain from further permanent damage."

Estrada-Lujan spent the night learning everything she could about the syndrome.

That's where she first discovered the drug cannabidiol, or CBD, a component of marijuana that has been increasingly studied as a treatment for FIRES and other intractable, or hard-to-treat, forms of epilepsy.

Last year, Wilfong (who was working at Texas Children's Hospital until late last year) and seven other doctors published a study on the use of cannabidiol in treating FIRES. In the study, they found that the Schedule 1 drug reduced the frequency and duration of seizures and allowed the patients to be weaned off of other medications.

"This stems from the whole medicinal marijuana craze that is out there," says Dr. Eric Marsh, one of the doctors who authored the study. "There are lots of anecdotes that were on social media that suggested that marijuana high in cannabidiol and very low in THC could be antiepileptic."

The liquid CBD oil often has low or no THC, the compound in the cannabis plant that produces the high.

When Estrada-Lujan learned about it, she began advocating for its use in Annalise's treatment. Nothing else seemed to be working.

"I wanted to know if my daughter was eligible," she says. "Dr. Wilfong was new to Arizona and didn't have his license to use it here, so he got with his partner Dr. John Kerrigan who had his license for this Schedule 1 drug."

Estrada-Lujan hopes that successful treatment of the syndrome with CBD oil will help other families like theirs who didn't know about the option. Annalise is trailblazing.

The process to use the drug requires approval from federal agencies such as Drug Enforcement Administration, Marsh says.

During that process, Annalise remained in a coma.

There are still a lot of questions surrounding the use of cannabidiol as a treatment for FIRES.

Because there isn't really an option to give a sick child a placebo, it's hard to know whether the success of patients was a result of cannabidiol, timing or some other combination of factors, Marsh says.

Questions remain about dosage, when to use it and who the ideal patient is.

Parents should also work with doctors to source the drug from a pharmaceutical company rather than online businesses or dispensaries that don't have sufficient oversight, he adds.

Also unknown are the effects cannabidiol use might have on the developing brains of these young patients. Using medicinal marijuana with THC over time probably would lower the IQ of a young patient, Marsh says, but not enough data yet exists on the impact of cannabidiol.

"Some parents are desperate, and they are willing to try anything, but it is not a miracle, and you have to be careful," Marsh says, adding that more research needs to be done.

On Saturday, May 6, Annalise was given a dose of Epidiolex, the same liquid CBD extract used in the study.

"I was there when she woke up," she says. "It was amazing. It was truly amazing to see eyes again."

Annalise is now awake and breathing on her own. She can follow basic commands.

"Open your mouth. Squeeze my finger. Stick out your tongue," Estrada-Lujan says.

To get off the ventilator, Annalise had to prove she could breathe independently by successfully "sprinting," or breathing without a ventilator for designated amounts of time.

At every stage, her community has rallied around her.

"I told her coach that she would be sprinting to prove she had strong enough lungs to get off the ventilator, so her teammates were all sprinting at Tumbleweeds," Estrada-Lujan says. "They were sprinting while she was sprinting."

The Tumbleweeds team has made cards for Annalise and sent a leotard to hang in her room, Tumbleweeds coach Jolly says.

"She's very energetic and always has a smile on her face," Jolly adds." She's caring for the other girls and constantly supportive of them. She's just an all-around great kid."

As Annalise begins therapy, the process will uncover the extent of the syndrome's effect on her brain. She's still having a few seizures for 8 to 10 seconds, but only one or two in the last week. They're not continuous like before, her mom says.

"We don't know how much brain damage has been done," Estrada-Lujan says. "She will need speech therapy. She has tried to speak, and you can make out a few things. We don't know what her motor skills are and the memory loss she has had. This is the first case here, so it's new."

Her ability to speak is limited, comparable to that of a 3 or 4-year-old, her mom says. It takes her time to process information.

Estrada-Lujan hopes that Annalise can complete some of her therapy at Tumbleweeds.

"All of our physicians and staff are happy to see she is doing well and are encouraged by the progress she has made thus far," writes Dr. John Kerrigan, the director of the pediatric epilepsy program and clinical neurophysiology laboratory at the Barrow Neurological Institute at Phoenix Children's, in a prepared statement. "While cannabidiol (CBD) is potentially one of the treatment avenues that has played a role in her progression, we can't say for certain it's what led us to this point, as we have been actively caring for and providing various treatments throughout her stay at Phoenix Children's. Controlled scientific trials of CBD are currently underway, which will hopefully clarify its role as a possible treatment for children with severe forms of epilepsy."

Annalise is making progress and working hard, but the road ahead will be a long one. Estrada-Lujan hopes they will be discharged in the next few weeks. Then they can come home to Tucson.

"To me it was so devastating because she is such a beautiful talented and kind little girl," says Geittmann, a registered nurse who lives in Illinois. "She has done so much for others, and so it’s time that we come together and do this for her."

First she wanted to collect soda-can tabs for the children at the Ronald McDonald House. Now…

The caring spirit of a 4-year-old Tucson girl has touched the heart of strangers.

When two of her kids got sick, this Tucson mom fought back

When Lisa Chuinard Hepner's doctor told her she had skin cancer and needed surgery, she was mad.