Lightning hits behind Tumamoc Hill just after sunset as a several monsoon storms move through Tucson, Ariz., August 23, 2022. The storms produced localized flooding from heavy rains, especially in the southern portions of the area. 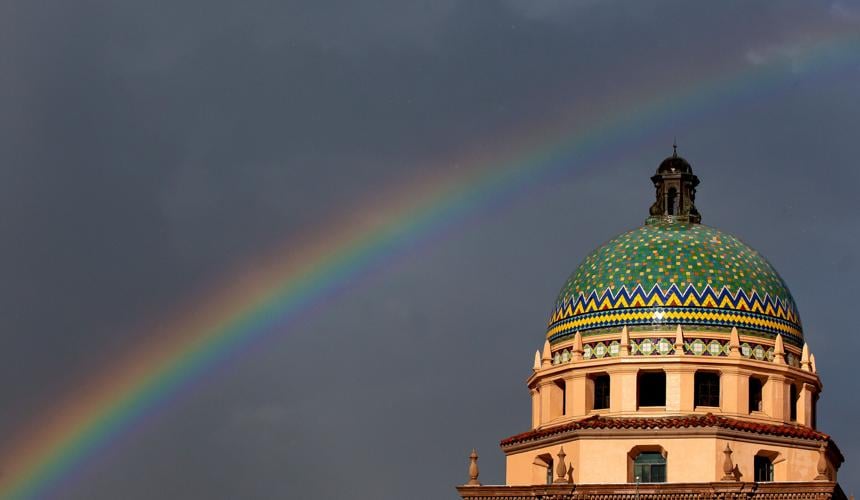 A rainbow appears over the historic Pima County Courthouse following a rainstorm in downtown Tucson, Ariz. on Sept. 13, 2022.

Despite storms across Tucson on Friday, the 2022 monsoon still fell short of the average.

The 2022 monsoon, which started on June 15, officially ended on Sept. 30 with Tucson receiving a total of 4.94 inches of rain. The Tucson International Airport, where the National Weather Service houses its official records, received 0.27 inches of rain on the season’s last day.

The average amount of rain seen during this time period is 5.69 inches, the NWS said.

You can check out rainlog.org, which was developed at the University of Arizona, to see rain totals recorded in other areas of Tucson. The site uses data from volunteers who have rain gauges at their homes and enter their totals through a form online following a storm. Anyone can join.

Even though this monsoon didn’t measure up to last year’s record-breaking season (which finished as the third-wettest on record, ending with 12.79 inches of rain), it is not as bad as other below average years. The NWS said the top 10 driest monsoons are all below 2.79 inches of rain.

And if you remember, 2020 was dreadful. It was the second-driest monsoon on record, tallying only 1.62 inches of rain the entire season.

For the next three months, Tucson is predicted to be drier and warmer than normal. For October, November and December, Tucson will likely see slightly below precipitation and above average temperatures, the NWS said.

Monsoon season in Tucson, Arizona started June 15, according to the National Weather Service. Find info on driving tips, how to avoid flash flooding and dust storms, and that amazing creosote smell.

Soundtrack of summer: Celebrate rainy weather with this 'Monsoon Mixtape'

Tucson Water and its artist-in-residence have released a "Monsoon Mixtape" by local musicians that features — and celebrates — the sounds of our summer storms.

It's a question we get a lot: how do I meet new people in Tucson? Here's a huge list of ways to make friends here, from joining your neighborhood association to connecting with people who share the same hobbies as you.