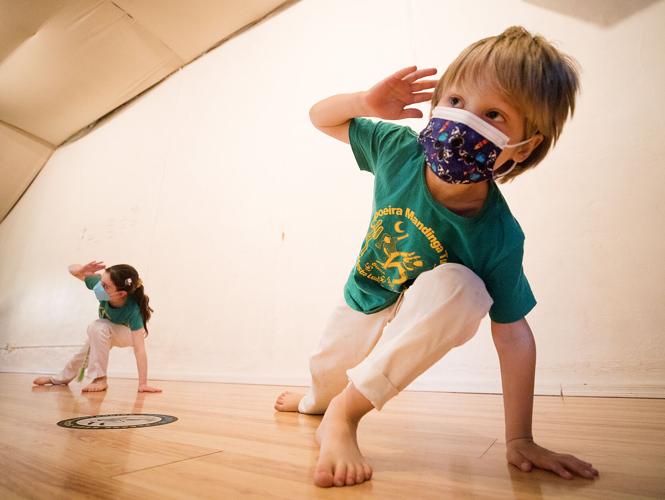 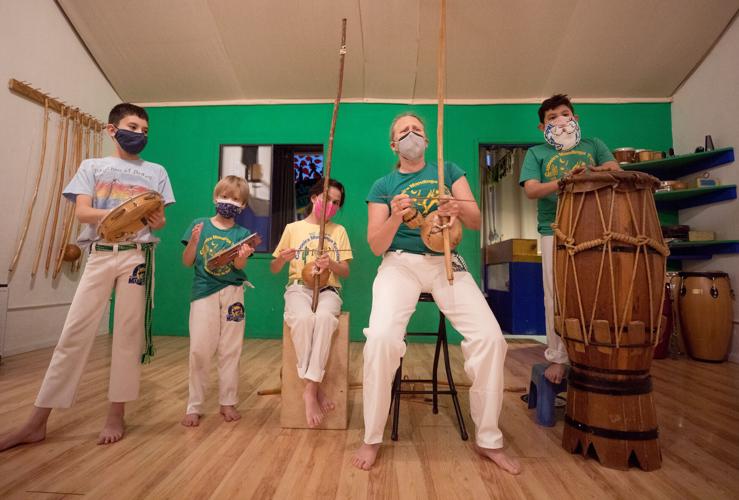 Anne Pollack, second from right, owner of Capoeira Mandinga Tucson, plays the berimbau, while her students play instruments as other kids perform capoeira moves during a class at 605 E. 6th Street in Tucson, Ariz. on February 10, 2022. 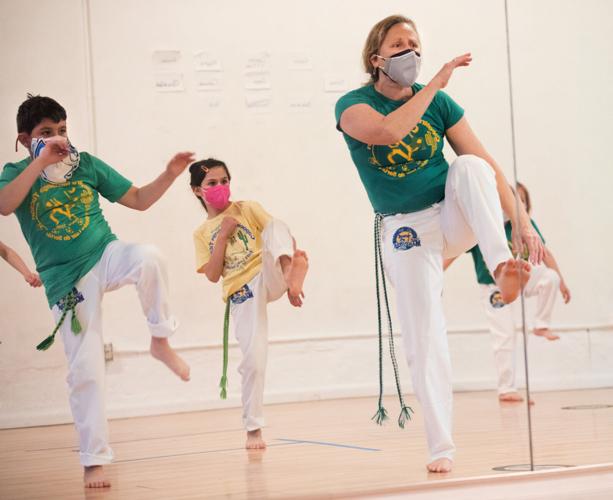 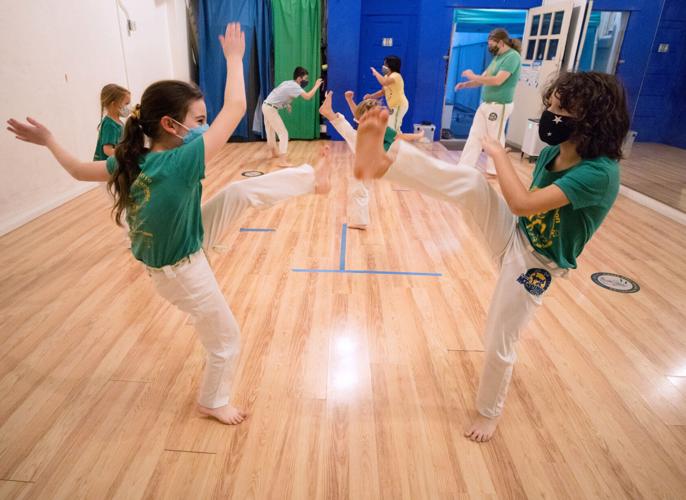 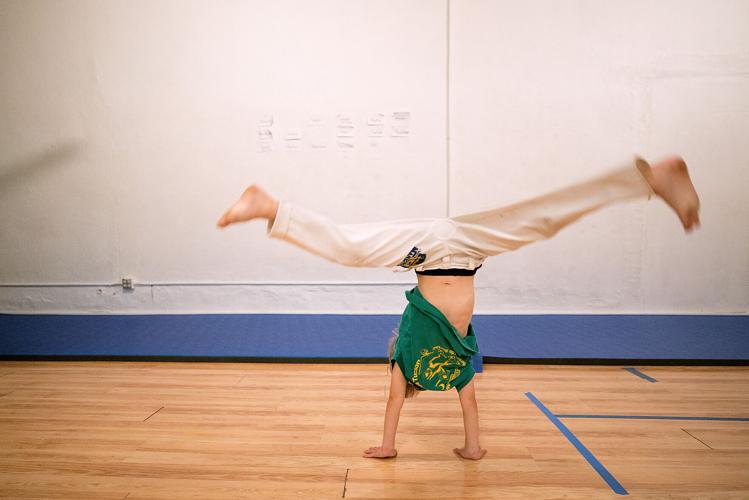 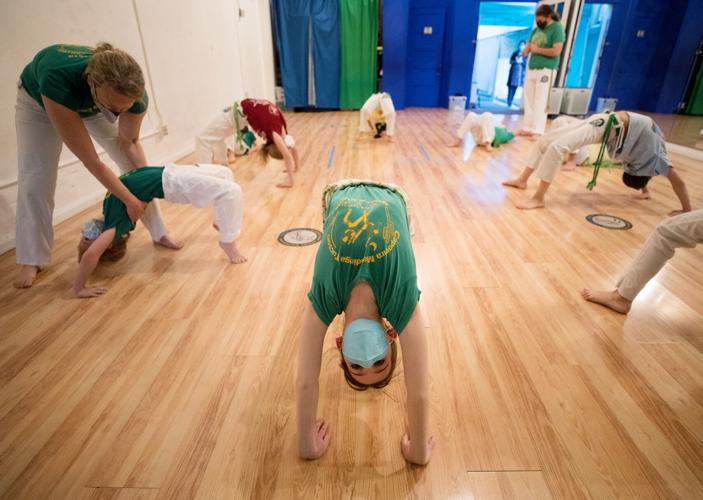 Students perform a back bend during a kid's class at Capoeira Mandinga Tucson at 605 E. 6th Street in Tucson, Ariz. on February 10, 2022. 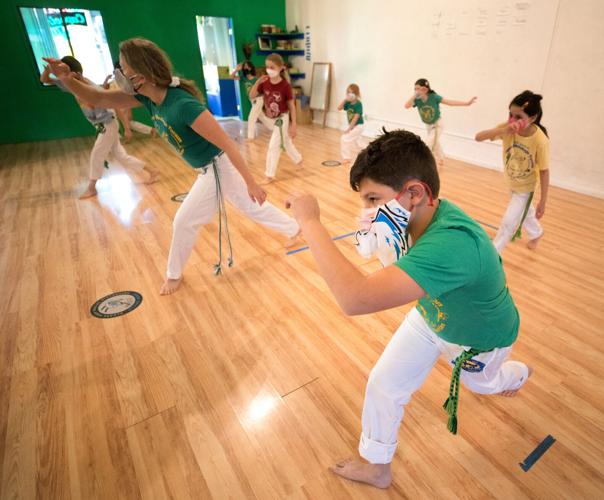 Practicing and teaching capoeira have been two of the driving forces in Anne Pollack's life. She is part of the first generation of women to practice capoeira in the United States and reach the level of master. To her knowledge, she is the only woman with that title in Arizona.

Originally from Philadelphia and known in the community by her Portuguese capoeirista name, Mestra Luar do Sertão (Moonlight Over the Desert), this endocrinologist by profession came to Arizona in 1996 and has since led hundreds of children and adults to discover their potential as they advance in the ancient Afro-Brazilian practice.

As she describes it, capoeira “is a game, it is a dance, and there is a percussion instrument that you learn to play, and songs in Portuguese that you learn to sing.” But the most important thing, she says, is that this practice "was created more than 450 years ago by Africans who were enslaved in Brazil, as a fight for freedom."

With more than 35 years of dedication to capoeira, Mestra Luar is the heart of Capoeira Mandinga Tucson, an academy located at 605 E. Sixth St., where children, youth and adults take classes three times a week. Her own practice began in San Francisco with the now renowned Mestre Marcelo, from Brazil, when capoeira was just beginning to be practiced in the United States.

Capoeira Mandinga Tucson opened its doors in 2006, when Mestra Luar decided to dedicate herself completely to teaching capoeira, leaving behind her work as a scientist and her research in cell biology, she says.

In alliance with the nonprofit organization Capoeira Institute Southwest, Mestra Luar also offers programs in public libraries and schools, where low-income youth and families participate. She also conducts workshops, public presentations and festivals that seek to promote cultural ties and encourage balance between mind, body and spirit in participants.

At the beginning of 2020, Adela Pesqueira began taking her daughter Lillee to Mestra Luar's academy. At nine years old and in the midst of the COVID-19 pandemic, Lillee wanted to stay in touch with a friend from her school who trained capoeira.

Very soon, Lillee began to learn the verbal and corporal vocabulary of capoeira. She learned to follow the rhythm of the music while kicking, dodging and doing side flips. She also began to learn songs in Portuguese and to play instruments such as the berimbau, the drum or the tambourine.

On her end, Adela began to hear words in Portuguese that she hadn't known until then. From her daughter's mouth came the names of the movements that the teacher taught her and that she did with her body: armed, bênção, martelo, Meia Lua de Frente and Meia Lua de Compasso. They were particular ways of kicking, dodging or reacting to the movements of her opponents.

“Mestra Luar is very good with children,” says Adela. “She is very patient, gives them confidence and helps them discover things that they themselves do not know they are capable of doing.”

In the brief breaks they take to drink water in the middle of a class, it’s clear that aside from facing each other in a game of capoeira, the children are creating strong bonds of friendship that transcend the academy. They talk about their favorite animals and school anecdotes; they make jokes, they have fun. As Lillee's mother says (Vivaz is her capoeirista name), for this girl, “the mestra is good for her soul.”

With her many years of practice, Mestra Luar — who has two children — has a great ability to connect with the little ones and transmit her passion and knowledge to them.

“Children are very good at stopping themselves,” she says. “They often are afraid to challenge themselves, so what I try to do with kids is give them the opportunity to learn something totally cool where they can face their fears, whether is a simple fear, or simple to me, like making a cart wheel, standing up in front of people and sing, or show other students or people what they can do.”

In her classes, Mestra Luar explains to the children that capoeira is not just about learning to kick or trying to knock down the opponent, but that the purpose is to create a flowing conversation and movement, where the body finds an answer to the move the opponent makes. “Capoeira is finding new ways to solve challenges,” says Mestra Luar.

Zach Carduce is 20 years old and studies physics at the University of Arizona. His journey in capoeira began in 2009, when he was less than 10 years old and friends invited him to join a summer camp at Capoeira Mandinga Tucson. There he met Mestra Luar, who has been his mentor in this art ever since.

Known by his name Cabeça Forte (strong head), Zach finds that “capoeira is a very good way to exercise, meet people and feel like a part of the community,” he says. After all these years learning from Mestra Luar, he is now one of the instructors at the academy and teaches twice a week.

About his teacher, Cabeça Forte says that “she is the one who makes everything work, it is because of her that events like this can be held; there's a lot going on behind the scenes."

Zach is referring to the most recent event organized by the academy: the Batizado 2022, an Afro-Brazilian festival that took place in Himmel Park on April 29-30, in which capoeira students received a raise in the level of their practice —which is displayed in a new color in the uniform cord — and where the new students received their name of capoeiristas in Portuguese.

Apart from this annual event, Mestra Luar focuses on making capoeira known throughout the city and participating, on behalf of the academy, in cultural events that take place in Tucson.

"For me, the important thing is to try to build a multicultural community," says Mestra Luar. “I want everyone to feel welcome in the academy. I also want to bring the benefits of capoeira to communities where people really need it, but can't afford it. That is why I started working through a nonprofit organization.”

Something that differentiates capoeira from other martial arts is music. Since this practice is also a dance, rhythm plays a central role.

When they are not dancing inside the circle, the participants sing and clap while other capoeiristas play percussion, the berimbau and the tambourine.

“The songs and the percussion are a sort of a mantra of capoeira,” says Mestra Luar. “They are like a wave that moves your body, your voice and your mind, and that also allows you to build a community. Everyone is clapping, singing, and empowering the people that is playing in the circle.”

After the complexity of sustaining the academy during the COVID-19 pandemic, Capoeira Mandinga Tucson has resumed the rhythm and strength that it's known for. Today Mestra Luar has students between the ages of 5 and 73, and brings together people of diverse backgrounds, cultures and genders under the same practice.

Learning from the difficulties, says Mestra Luar, "My goal is to continue expanding the positive impact of our programs."

To learn more about capoeira and about the classes, summer camps and presentations at Capoeira Mandinga Tucson, visit their website. There's an Afro-Brazilian music program being held at Woods Memorial Library from 10:30-11:30 a.m. Friday, June 10.

This community on Tucson's south side is changing the narrative

La Doce, a 3-mile stretch along South 12th Avenue on Tucson's south side, is working to embrace its cultural identity and pave the way for future generations.