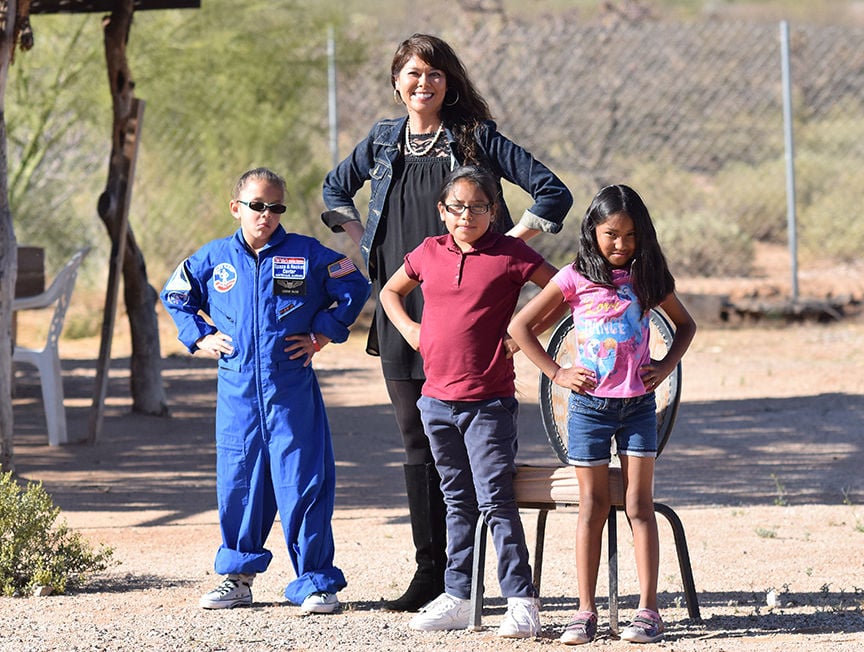 This is the first group of Pasqui Yaqui girls who will go to space camp, thanks to the Taking Up Space Program. Czarina Salido, director of Taking Up Space, stands behind Serena Martinez, 11, left, Soledad Ramirez, 9, and Saydee Valenzuela, 10. 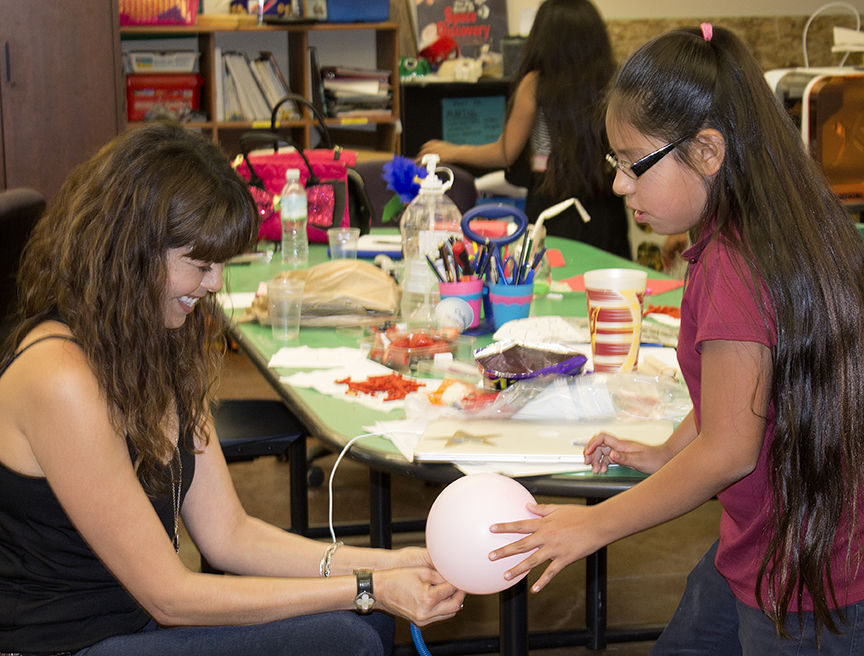 Director of Taking Up Space, Czarina Salido and Soledad Ramirez, 9, work on inflating a balloon for a science project in May 2017. 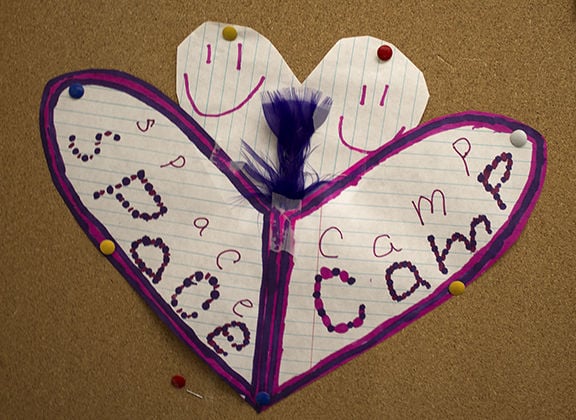 Space camp inspired drawings decorate the bulletin board in the Pasqua Yaqui Clubhouse.

A group of girls sits around a table scattered with snacks, balloons and papers at the Pascua Yaqui Clubhouse, excitedly talking about the upcoming week.

They're supposed to be inflating balloons for a science experiment as part of the mentoring program they're in. But they're too wound up. And a little nervous.

Their first week of summer break isn't going to be filled with lazy days and television.

Instead, they're catching an early morning plane on Sunday to Huntsville, Alabama for a week of space camp.

Three girls who attend the Pascua Yaqui Clubhouse every week are able to go to space camp, thanks to Taking Up Space, a program with a mission to expand opportunities and future educational and career goals for Native American girls.

"We wanted to reach out to Native American Girls," said Czarina Salido, director of Taking Up Space. "I think they're underrepresented...There are groups for girls, but there's really none for Native American girls, so we thought this would touch different lives."

The program includes a weekly mentoring session at the clubhouse where the girls do science projects and experiments with Salido, who is also the executive director of Time in Cosmology — a Tucson non-profit which aims to bring together researchers, students and others interested in STEM (science, technology, engineering, mathematics).

"When I first came here, I originally wanted to pick junior-high-aged girls from school, but after I got here I realized these girls would probably benefit a little more from a program like this," Salido said. "I realized they didn't have much of a STEM academia at all in their background. Science is very minimal. I realized in order for them to be prepared for space camp I needed to prepare them a little bit to learn about STEM in general. That's why I decided to make it a mentoring every week."

This is the program's first group of girls heading to space camp.

She says she is most looking forward to learn about what astronauts do and what it feels like to be one.

Saydee wants to do a lot when she grows up, which is exactly what Taking Up Space wants to inspire.

"I want to go to space, but then I want to be a lawyer and learn about science," Saydee said.

When Serena Martinez, an 11-year-old fifth grader, first found out she was going to space camp, she "got happy."

"Space camp is three parts: Space camp, robotics and aviation," Salido said. "It gets more intense as it goes along."

She also hopes to add more girls along the way.

The trip isn't cheap. A week at space camp costs about $1,000 per person. The program is funded through donations, so the girls don't have to pay for anything.

When Salido was a kid, she got to go to space camp and she said it was life-changing.

"It was extremely empowering," Salido said. "It was a lot of fun and it was all science and space. So I thought that if I had so much fun, it would be good to empower the girls and thought they could get immersed in STEM and hopefully it will ripple out later in life."

Soledad Rameriz, a nine-year-old third grader isn't really into space stuff, but she is into STEM.

"I want to be a doctor because I want to help people," Soledad said.

While at space camp, the girls are on a simulated mission. The theme is "Mission to Mars." They'll get to train to be astronauts, using some of the same simulators astronauts from the Apollo Mission used, Salido said.

They'll get harnessed in a space suit and go outside of a mock shuttle and fix a satellite, while communicating with mission control.

If nothing else, Salido hopes the girls will come back with a few new skills.

"I'm hoping for a good experience," Salido said. "Maybe they won't all go into STEM, but maybe they'll get a little empowerment, leadership and teamwork skills."

To learn more about Taking Up Space, or to donate to the program, click here.

This Desert View senior taught herself English, persisted and blossomed

Despite poverty, violence, deportation fears, this Cholla senior heads to college with an extra $20K

Life has never been easy for Kathleen Armenta.

This class allows your kids to help train the family dog

There's a new class in town that teaches kids how to train the family dog.

5 free things to do with the kids this week

Sometimes it can be hard to find things to do with the kids that don't cost an arm and a leg.

Unleash your inner Amazonian at these 3 Wonder Woman events

The number of Pima County children enrolled in quality early education programs has gone up, and that's a good thing.

14 teen moms and their kiddos are headed to summer camp ☀️👶🏕️

It's summer camp, complete with ropes course, zip-lining ... and babies.

A pep talk from some of Tucson's most successful women

As a Hispanic girl growing up in Tucson, Czarina Salido had to be a fighter to overcome negative assumptions and obstacles but the challenges …