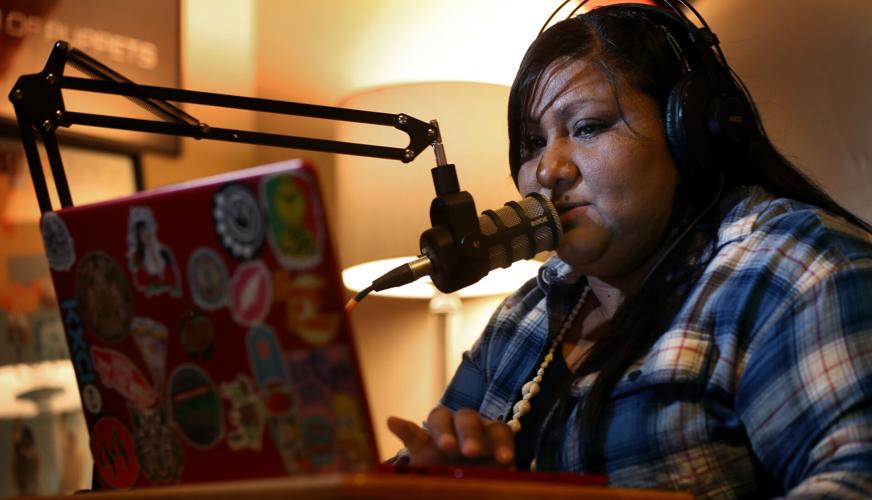 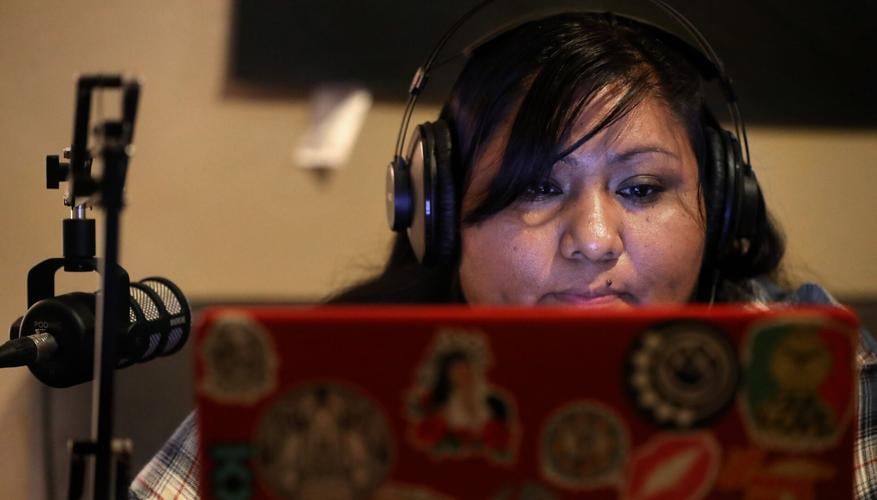 After nearly six years of working on Tohono O’odham Young Voices — her local podcast committed to sharing the uncensored contemporary stories of the Tohono O’odham Nation and other Indigenous communities — the podcast finally reached over 10,000 downloads.

So, Vavages and her tight-knit team of four did what anybody would do. They threw a party.

“It took me a while to take it in because it's been some time since 2016. And I just never would have imagined back then that we'd be having this whole celebration for this podcast,” she said. “So it was very, you know, mind-blowing to me on that day. And people said so many nice things that I just was like, ‘Wow, like, people feel this way about me and people feel this way about the podcast.’ The love and the respect and the support were just felt on a whole other level that day and the appreciation and the community really came through.”

The podcast's block party was held on Oct. 1 at Galeria Mitotera in South Tucson and featured a handful of art and food vendors including Tohono Gourds & Willow, Spirit of Cukşon and Reservation Sensation Frybread.

“Just really good energy all around,” said Napoleon Marrietta, the podcast’s administrative assistant. “And one of the vendors actually said that this was the first time he'd been a part of an O’odham-led event. Tucson does tons of things, you know, Tucson Meet Yourself and all the other stuff, but for this to be a really small, kind of like, do it yourself, grassroots event, we've come a long way. You get that feeling of authenticity of community and those who have really been there to support you and I think it was just an amazing turnout.

“And whether it was only five or 1,000 people, I think the accomplishment is there and it was all around and you could feel it. We're all just vibing off each other.”

Along with celebrating a milestone achievement, Vavages and the team had a couple of other wins to recognize — the launch of their new website and receiving grants from the Arizona Commission on the Arts, the Arts Foundation for Tucson and Southern Arizona and the Flinn Foundation.

The grants have helped Vavages build her all-Indigenous podcast team that includes an administrative assistant, a marketing coordinator and a student intern from Amphitheater High School. Prior to making the podcast a group effort, Vavages was taking on multiple roles by herself, including booking guests, doing research, recording interviews and editing.

Now, she sits at the helm of the podcast as the executive producer and voice of the bi-monthly show.

Even as the podcast team — and its reach — continues to grow, its mission hasn’t changed and won’t anytime soon.

A space to tell their own stories

From its start in 2016, Vavages was determined to create a space where local Indigenous communities could tell their stories and perspectives their way — in their own voices and words that couldn’t be altered by mainstream media.

“It's really a place where community tribal members can share their stories, their narratives, their perspectives and their truths in regards to whatever that is,” Vavages said. “Whether it's a cultural perspective or storytelling, an experience of living in the borderlands, traditional knowledge and language, as well as community events, different topics, things that relate to tribal communities, not just Tohono O’odham but all Indigenous communities because we're all similar in those ways. And where it is at today is just still very mind-blowing to me, because I would have never thought that a podcast could do so many different things in so many areas and be a resource to the community as well.”

Other topics that the podcast touches on include music, history, food, social justice issues and sports, all of which are relevant to the next generation of Indigenous communities.

“So it was having those opportunities to share with the younger generation and showing that we are still here,” Vavages said. “And we need to start telling our own stories, again, in an uncensored way, because I've been an activist and talking to a lot of different outside (media, like) Al Jazeera and all those other kinds of reporters and when the article comes out, they leave a lot of important information out that's important to us that we would like for others to know.”

“The important part (of the podcast) is being uncensored,” said Marrietta, who is also currently a graduate student in the American Indian Studies (Indigenous Rights and Social Justice) program at Arizona State University. “So I think a lot of things I was getting interviewed for, a lot of social justice issues, you know, you get these kind of weird stories that come out by journalists and other sources that kind of mess with it a little bit. So I was like, ‘Man, what is out there for our people, (for) Indigenous people?’ And so coming across the Tohono O’odham Young Voices Podcast really changed the way I think about media.”

The spread of misinformation and misrepresentation in mainstream media, particularly of Indigenous communities who were deemed as “bad people, as folks who are engaging in illegal activity,” Vavages said was one of the reasons she became inspired to start the podcast over six years ago.

Before taking on the task of starting and running the podcast, Vavages worked as an environmental educator at Saguaro National Park West, where she often did community outreach on conservation and the Southern Arizona environment.

It was this gig and a bit of chance that drew Vavages to podcasting.

In 2016, Vavages was asked to be a guest on Kimi Eisele’s radio program on KXCI Community Radio. During the radio interview, Vavages was exposed to a professional recording studio adorned with high-quality microphones, recording equipment and other “cool stuff” that she found to be inspiring, she said.

“I learned really fast that the platform that she was using to get out my story could be something that could reach the masses, locally and pretty much worldwide,” she said. “And I thought to myself, ‘Wow, this could be something interesting to learn about.’ So I started asking questions and she started to really help me and from there on, I started to kind of just seek out other resources and learn about what is a podcast and what does it take to be a podcaster.”

Since its pilot episode, the team of one has grown to a team of four young, Indigenous voices who Vavages hopes will continue to carry the torch and pursue their own storytelling endeavors. Marrietta has already gotten his start in podcasting by voicing a Tohono O’odham Young Voices episode of his own, where he interviewed two Indigenous athletes.

“So maybe one day they'll move on from the podcast and they'll have their own podcast, which I look forward to hearing and seeing myself,” Vavages said.

Because the podcast is primarily recorded remotely at the moment, Vavages would eventually like to open up a recording studio with professional tech and equipment that she and the team could use to continue sharing their stories. The possible future studio, she hopes, would be a place where other tribal community members of all ages could come and utilize the equipment for school projects and other work.

“This is the next generation. We're the building blocks for the next generation,” Marrietta said. “And Southern Arizona is an interesting place for Indigenous people and our history. To see us at the front, telling these stories introducing you to Southern Arizona is long overdue. We're able to be at the forefront of media, newspapers, websites and we’re seeing more narratives being challenged, whether that's an institution's or outside (organizations’). … There's other stories that do need to be told, that we might not have been able to capture, but it's through these trials and errors and successes that make us build further and further on and continue our storytelling just like our people did back then.

“Keep telling your stories, you'll find it in any way. We just happen to be a podcast that does it.”

For more information on Tohono O'odham Young Voices, check out the podcast's website. You can listen on Apple Podcasts, Spotify, Google Podcasts and Castro.

The Rez Girls Book Club was founded in early 2021 by April Ignacio, a member of the Tohono O'odham Nation. The monthly online book club hopes to give exposure to Native and Indigenous authors.

The Tucson Women Shredders are a local all-women's informal mountain biking group who aspire to create a diverse cycling community while sharing a passion for Tucson's mountain ranges and beyond.

Charles Collins has spent years developing and perfecting hydroponic and aquaponic gardening systems, which he says are a solution to address climate change.

Your guide to Día de los Muertos: Origins, traditions, what it means to the Tucson community

An explainer of the traditional Mexican holiday, Día de los Muertos, also known as Day of the Dead. Take a dive into the history of the holiday, its traditions and what it means in Tucson, Arizona.

The owners behind Rozet Nursery on Tucson's east side have a weekly watering playlist featuring music from across the globe. The nursery hopes to create a connection among the community, plants and music.