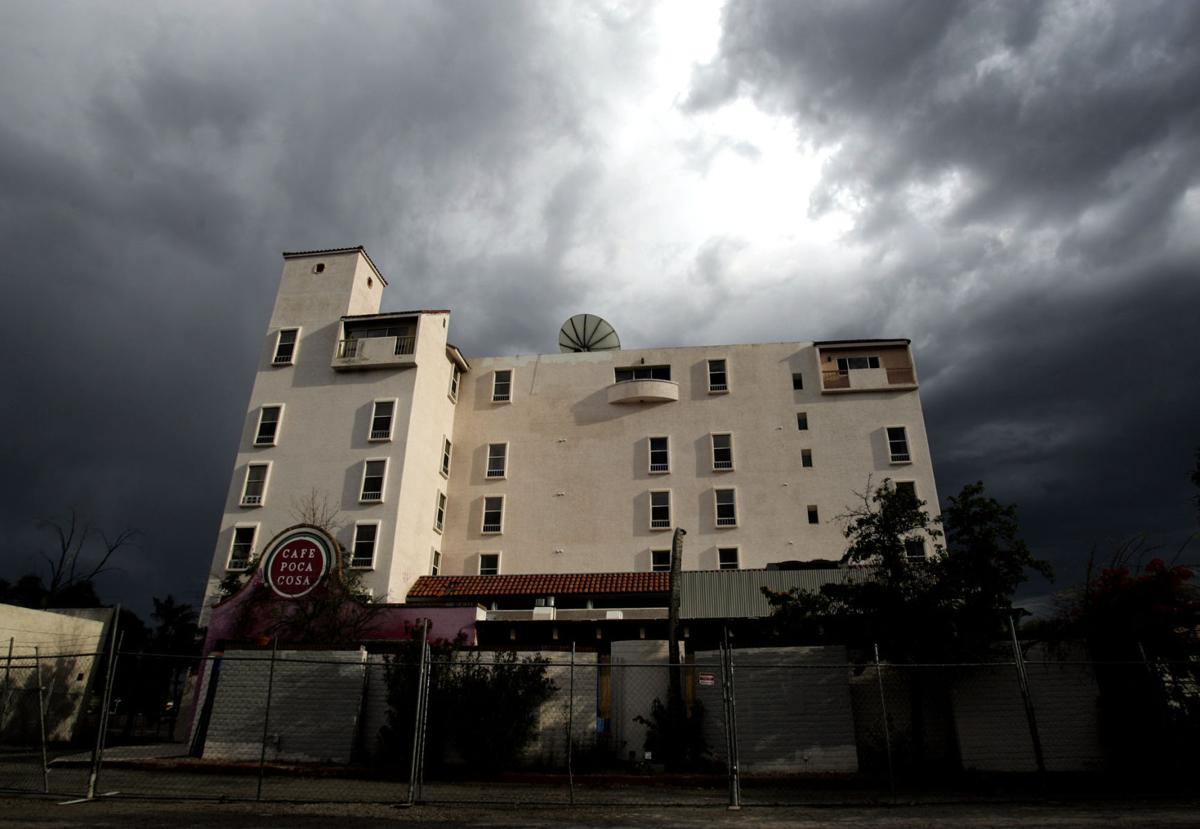 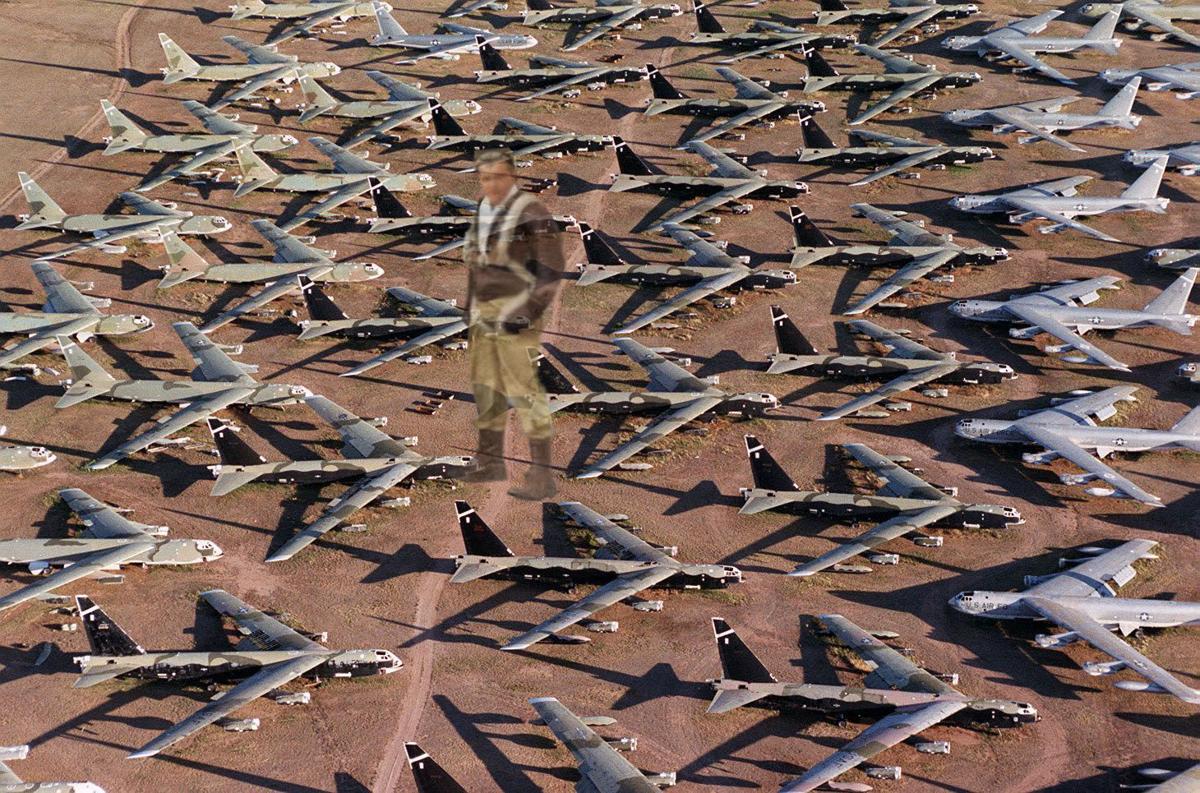 The dry air and hard soil are the two main reasons the "Boneyard" is located here. Arizona Daily Star file photo from 1991. 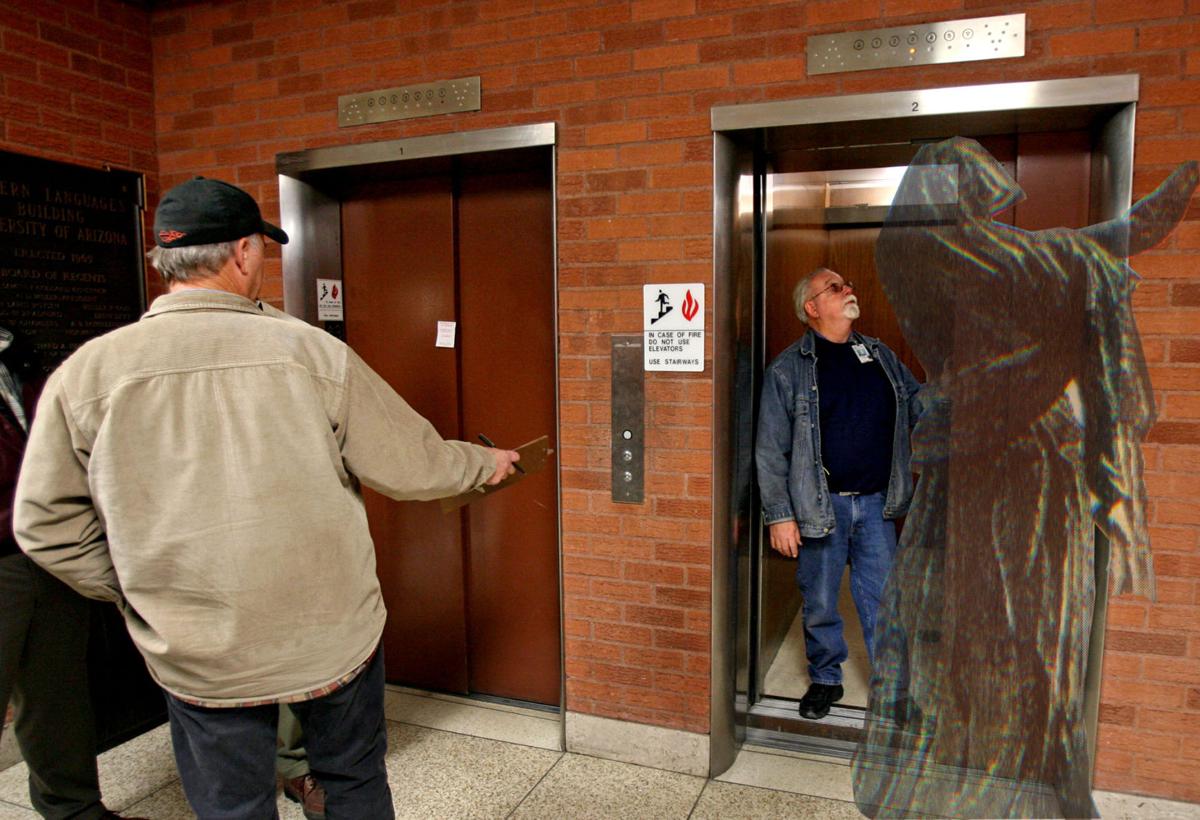 The Modern Languages building at the University of Arizona in Tucson, Ariz., Tuesday Jan. 16, 2007. 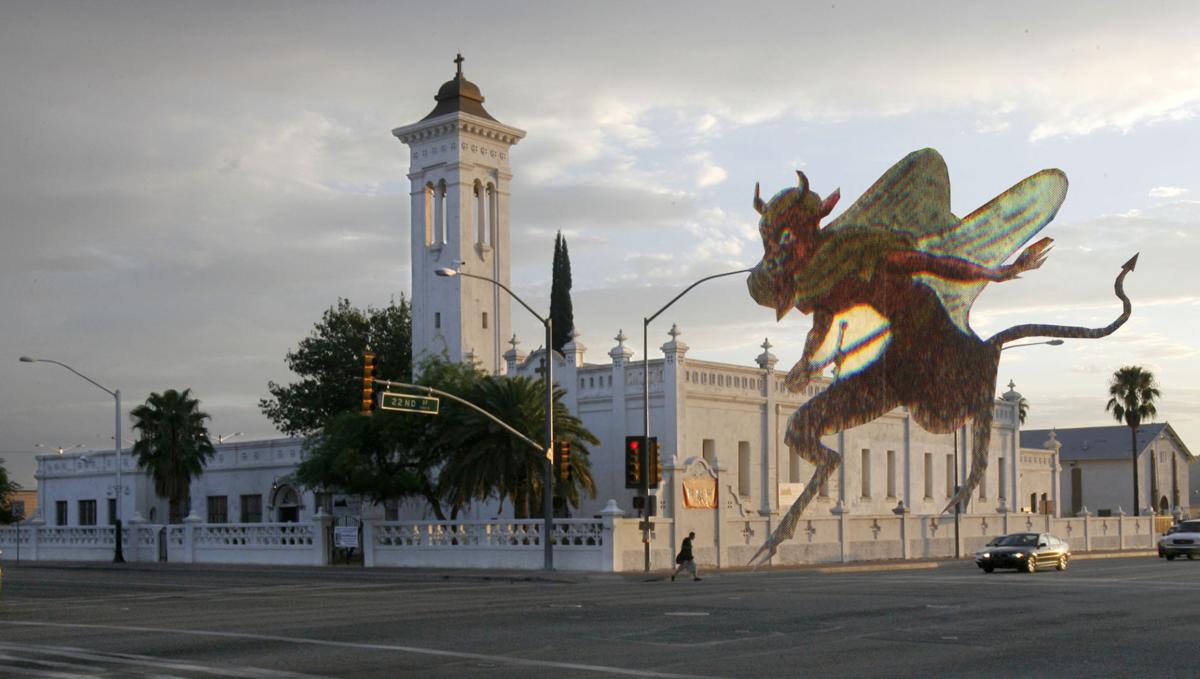 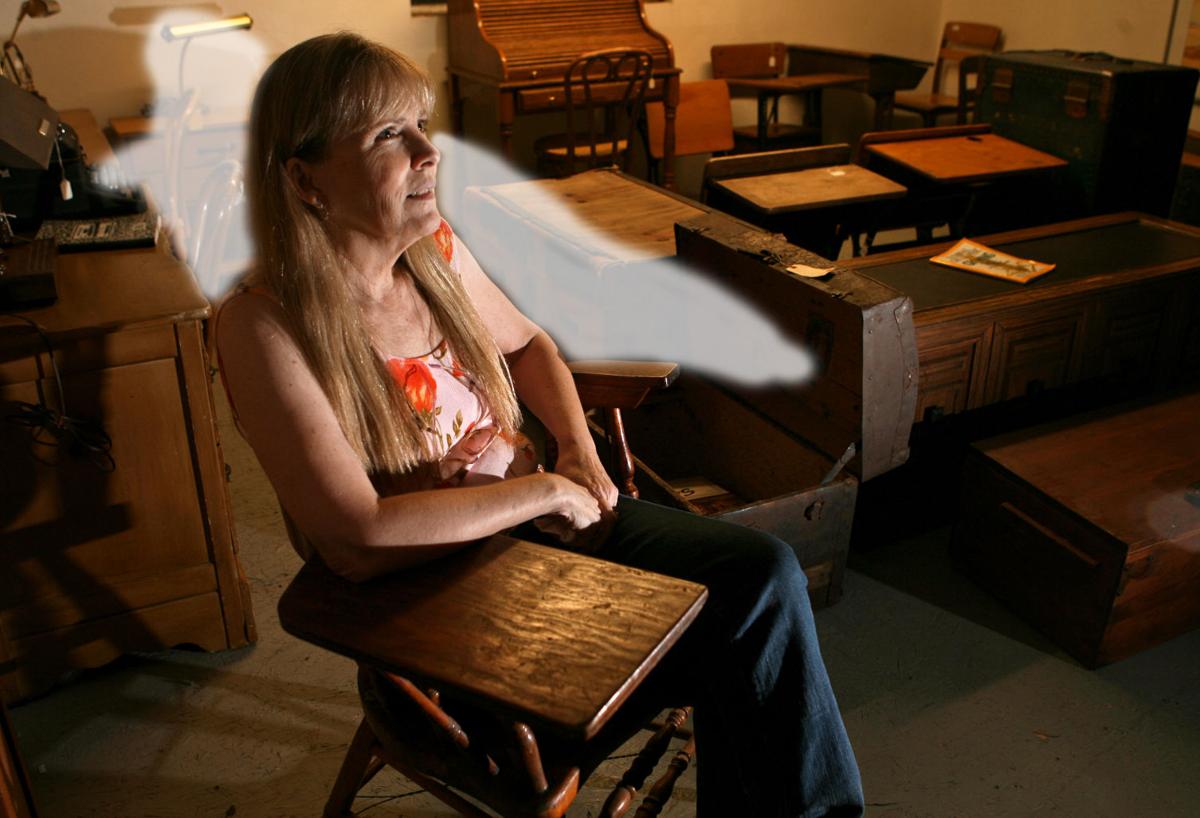 Assistant manager Kathy Sevits sits next to the notoriously haunted Booth 52 where she has heard a an antique typewriter typing with no one around. Tuesday Oct. 21, 2008. 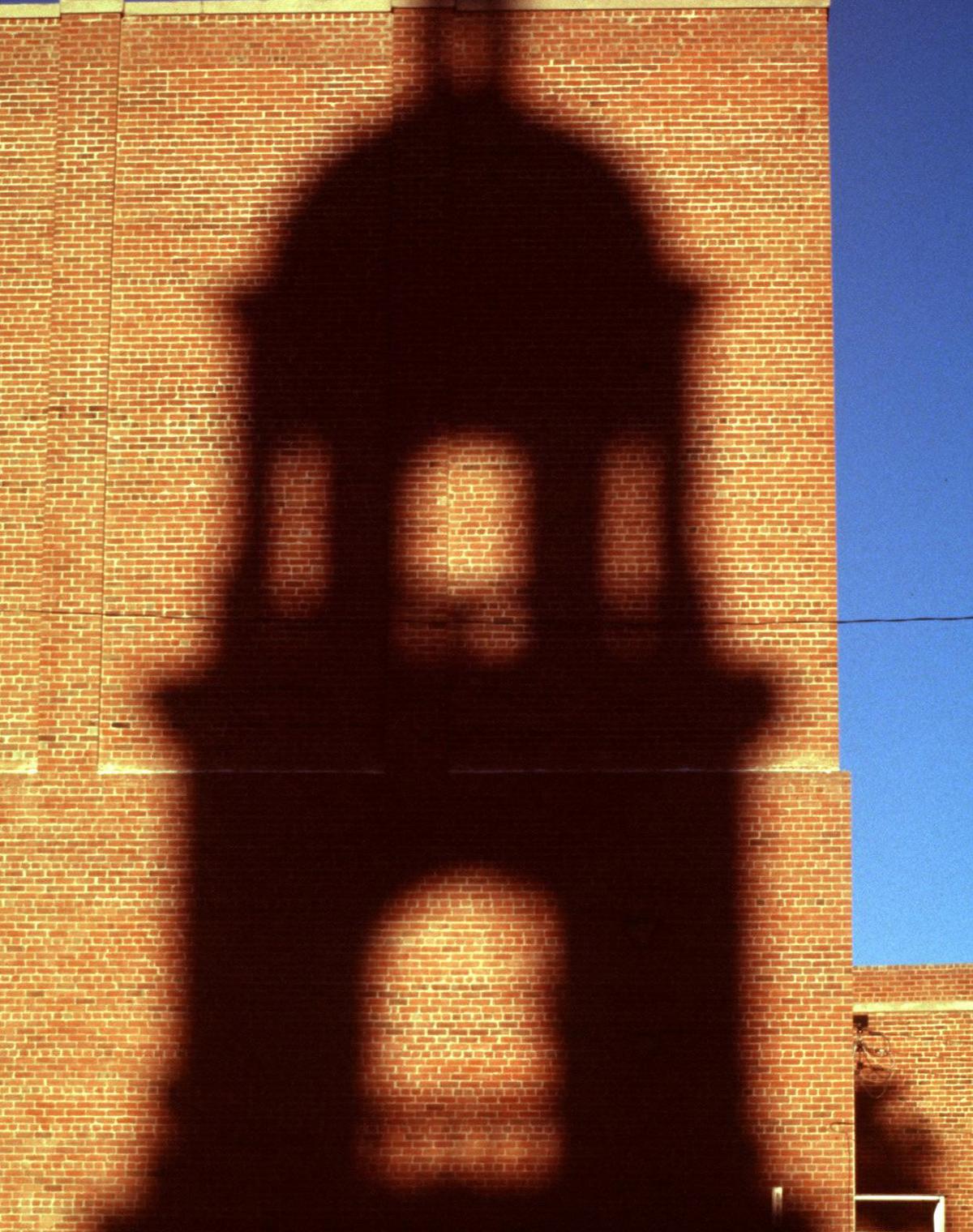 It wouldn’t be spooky season without some good ghost stories and when you live in a town as old as Tucson, there are quite a few to tell.

Chances are you've probably walked by or visited some these of these places and felt some weird vibes or seen something you can't explain, you're definitely not alone. Muahaha!

We saved a few haunts to share with you in our upcoming Facebook Live event Tucson's Haunted History + Ghost Stories happening on Thursday, Oct. 29 at 5:30 p.m.

Becky McKiddy-Gydesen, a paranormal investigator and owner of Tucson Ghost Company will join us to share some of her own first-hand experiences and stories she's collected from others through her ghost tours and investigations of some popular Tucson places.

Join us if you dare!

Before it was demolished in August 2009 to make way for the Unisource Energy's corporate headquarters, the Santa Rita Hotel stood on the corner of East Broadway Boulevard and South Sixth Avenue. When it was time to close up shop the spirits of the hotel did not go quietly. In a 2009 Arizona Daily Star story, several months before the building was torn down, police were called to investigate the empty hotel after a security guard claimed to have heard something eerie.

"The guard heard footsteps coming from the fourth floor, but police searched the hotel room by room and found nothing. A week later, a guard reported that a light on the fourth floor came on, and it sounded like someone was moving around in the room. Police checked the room and adjacent floors and found no one.

"In recent weeks, construction workers near the hotel say they've heard stories of rocks skipping down the hallways and doors slamming shut. And a Star reporter walked by the building Monday night and heard a creepy belly laugh emitting from the building. He hopped a fence and spoke to a security guard, who said the noise didn't come from the hotel."

Parapsychologist Amy Allan of the Travel Channel's Dead Files has said the Santa Rita Hotel was just as inhabited by spirits as the San Diego's Whaley House, which is considered to be one of the most haunted places in America.

Security police patrolling Davis-Monthan Air Force Base’s Boneyard, the mothballed aircraft storage area, allegedly have seen the specter of a fighter pilot, dressed in World War II-era gear slowly walking among the old aircraft, perhaps searching for his own plane. Some have said the headlights of their patrol vehicles go out during these encounters, and flashlights don’t function. Others said the ghostly figure walks through the security fence and across Kolb Road before disappearing.

This story is one of the “universal” Mexican ghost stories, hundreds of years old, with many variations. Translated as “the crying woman,” she is seen traditionally in Tucson anywhere from the South Stone Avenue underpass to the Santa Cruz River. One version has it that she was condemned to search for her children, whom she had drowned to spite an unfaithful husband. Another says she was promiscuous and had many children, whom she drowned. When she died, she was told she couldn’t enter heaven until she found them all and brought them with her. Yet another version holds that she emigrated from Nogales, Sonora, leaving her children behind. Soon after, the Santa Cruz River flooded, the children drowned and their bodies washed up the river to Tucson. Legend has it that anyone trying to touch La Llorona will suffer a burn.

Several people over the years have reported encountering the ghostly figure of a young woman walking the corridors of the Modern Languages Auditorium at the University of Arizona. She is dressed in a long gown and wears a shawl over her shoulders. Tradition has it that many years before the auditorium was built, a young woman was murdered and her body dumped in a well on the site.

What started as a two-room cathedral in 1858 has grown into the beautiful church we see today in downtown Tucson at 192 S. Stone Ave. In a 2014 interview with the Arizona Daily Star, ghost tour guide Robert Owens said the church was one of his favorite places to visit because it's been said to be the home of a faceless nun who levitates in the courtyard.

“The faceless-nun phenomenon has actually been reported all over the world at really old churches and haunted locations that have a religious history aspect to it,” Owens said. “So it’s kind of a strange archetypal myth, if you will.”

At some point in Tucson’s past, legend has it, a priest was out for a walk downtown. During his leisurely stroll, he senses that something is following him. The priest, believing he was being trailed by a large dog, turned toward the Santa Cruz Church at South Sixth Avenue and East 22nd Street. The creature behind him drew closer and closer. The priest was relieved as he approached the door of the church. Reaching toward it, he turned and saw that his stalker was not a dog after all, but a beastly, hellish thing with hooves and horns. As the priest’s hand touched the door, the creature disappeared.

Carlos Ygnacio Velasco was publisher of El Fronterizo, Tucson’s first Spanish-language newspaper, working from his home in the 400 block of South Stone Avenue from 1878 until his death in 1914. The house was turned into apartments after his death and bought by three partners. One of the new owners entered a bedroom behind what had been the old press room one night and was somewhat unsettled at the sight of the head and shoulders of an old Mexican man with a drooping mustache. Three months later, the owner and a young woman again saw the same figure, this time full length, standing in a rear doorway.

What more appropriate a place to haunt than a place full of old stuff? Here in Tucson we have the "Haunted Antique Mall" at the 22nd Street Antique Mall, at 5302 E. 22nd St. Here are the facts:

1. The mall has a main store and a two-story adjacent annex: It was built as a furniture store. The office was in the second floor annex. In one booth upstairs was an antique typewriter last used long ago. Several customers and employees reported hearing a typewriter typing away over a period of months, but when investigated, nobody was there. Many customers told employees there were "ghosts" upstairs — that area is no longer being used.

2. The second floor booths mostly contained furniture — chairs, desks, tables, beds, etc. Several times, the employees straightened up the furniture before going home at 5 p.m., only to find it rearranged, the chairs pulled out into the aisles, and all askew, the next morning.

3. A radio tuned to a local station for background music was left on upstairs while the store was open. Often it would increase suddenly in volume when nobody was upstairs.

4. The following is a description from an employee who still works at the mall: "The holiday season was upon us and we were very busy. One of the employees was approaching the doorway into the annex and we both were suddenly 'frozen' in our positions. The people who were shopping all sped up like in a time warp. It might have been only a matter of seconds but it seemed like hours. Then everything slowed down to a normal pace. My fellow employee was still standing in the same position on the stairs with a dazed look on her face. I said to her, 'Did you see that?' She replied, 'What just happened?' We were both shaken up."

5. One employee was bending over a jewelry showcase when she felt something brush past her back. Looking up, she saw a "transparent" figure of a young male with a mischievous look on his face who quickly vanished.

6. Several employees and customers were at the back of the mall when they heard a loud sound of crashing glass from one of the front booths. They rushed to the booth, but nothing was amiss. The booth was rented to a dealer who had died the month before. His goods were still in the booth. He was known to the employees as a prankster.

Perhaps these are all imagination, but we have documented all of these events from more than one source. Is the mall haunted? Well. . .

While festivities may look eerily different this year with the Pima County Health Department recommending that the community avoid door-to-door trick-or-treating, Halloween parties, haunted houses and festivals all events that can put you in close proxmity with others, Tucsonans are getting real creative to make sure kids and families can still enjoy some Halloween magic.

There are still plenty of Tucson, Arizona autumn traditions you can enjoy during 2020, including finding fall colors, picking pumpkins, planting a fall garden, eating at Tucson Meet Yourself and more.

Check out all the local Halloween events still happening this season. Get your scare on with…

Johanna Eubank is a digital producer for the Arizona Daily Star and tucson.com. She has been with the Star in various capacities since 1991.