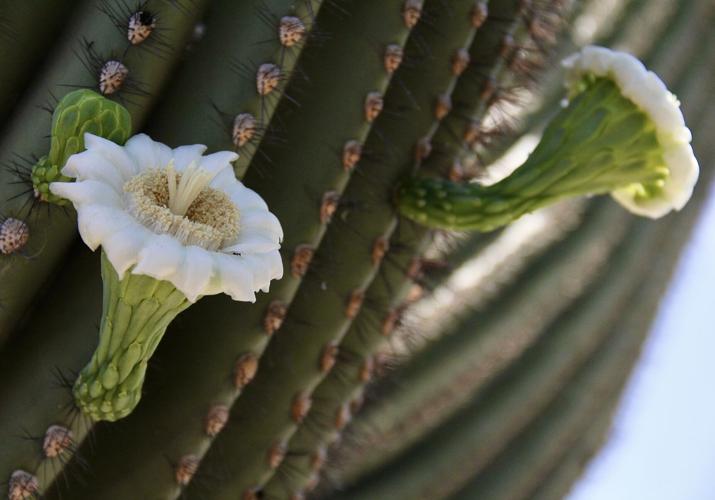 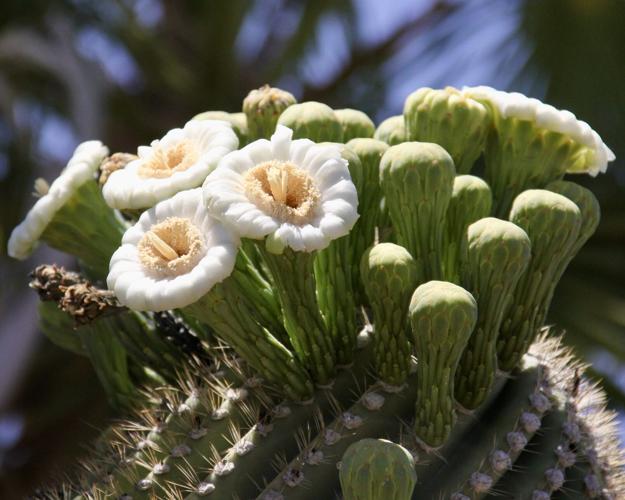 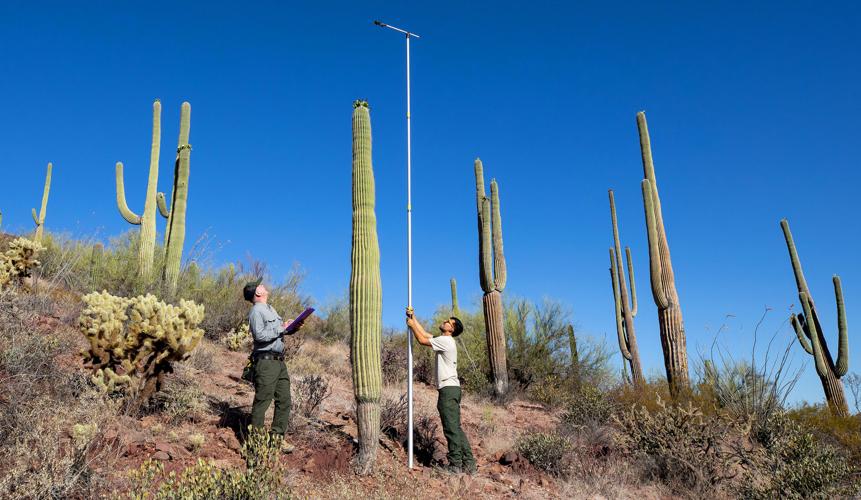 Don Swann, biologist with the National Park Service, left, and Gabe León with American Conservation Experience, take pictures at Saguaro National Park West as part of an effort to track cactus flowers across the entire 93,000-acre preserve outside of Tucson. 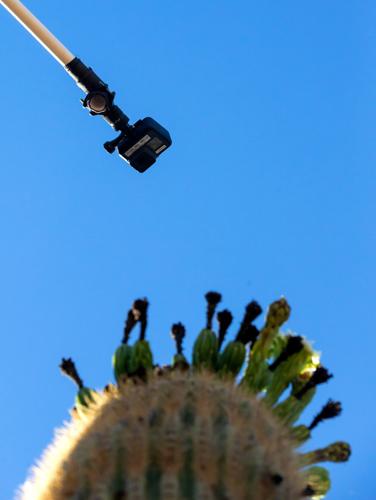 A GoPro camera attached to a giant "selfie stick" takes pictures of buds and blooms on a saguaro cactus at Saguaro National Park West. 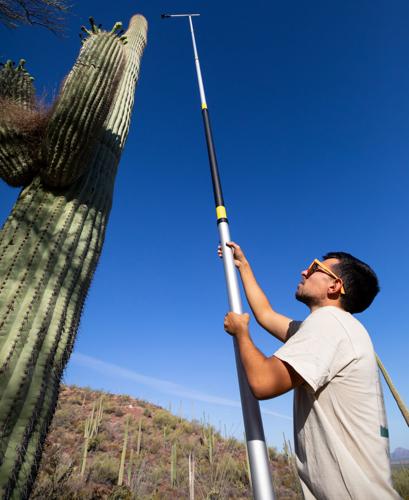 Gabe León, intern with American Conservation Experience, places a giant "selfie-stick" with a GoPro camera attached next to a saguaro at Saguaro National Park West.

After a massive bloom last spring, many of the saguaros around Tucson seem to be taking a year off.

Cactus experts report below-average bud and blossom production on saguaros in the Rincon and Tucson mountains, with almost no flowering activity at all at some east-side locations.

Though Saguaro National Park doesn’t actively track cactus flowers across the entire 93,000-acre preserve, the numbers appear to be way down, according to park biologist Don Swann.

“In some parts of the park, we’re seeing no sign of reproduction,” he said. “The majority of saguaros are not showing any buds or flowers at all in most of the places I’ve looked.”

Researchers have seen sudden drops in flower production like this before, but this one seems different to Swann.

“Usually when there are few flowers, there is a direct link to a climate event, as in 2011 when we had a deep freeze,” he said. “This year we think there is a less direct link.”

It’s “pure speculation,” Swann said, but the lack of flowers could be a response to several years of extremely dry conditions, followed by last year’s above-average bloom.

“They put all their energy into reproduction last year. Now they’re taking a pause to recoup and recover,” he said.

So what caused all the saguaros to push out so many blossoms in 2021, weeks before the recorded-breaking monsoon storms had even begun?

“We can’t be sure,” Swann said. “We were joking that maybe they knew that the rains would come.”

Mark Dimmitt is a Tucson horticulturalist who maintains a sprawling collection of unusual plants in his garden and greenhouses on the west side.

He said he spends more time these days checking the ground for rattlesnakes than studying the tops of the giant cactuses in his neighborhood. Anecdotally, though, he has noticed a lot fewer saguaro flowers on the eastern slope of the Tucson Mountains, especially compared to last year’s epic display.

“It’s down quite a bit,” said the retired director of natural history at the Arizona-Sonora Desert Museum. “A number of plants in my yard don’t even have buds yet.”

Some speculate that a lack of winter rain could be to blame, but Dimmitt said that can’t be the only reason for low production in a given year.

“Saguaros store a lot of water. The ones in the Yuma area can go two years without rain and still flower,” he said.

He’s not terribly worried about it in any case.

“One or two years of low blooming I don’t think is cause for alarm,” Dimmitt said.

One place the saguaros are blooming — though in much lower numbers than usual — is in a scientific plot the park service established on the west side of the Tucson Mountains in 2017 to study reproduction by the park’s namesake cactus.

Swann said the saguaro flowering phenology plot is within a short walk of the park’s Red Hills Visitor Center and includes 55 of the mature plants.

Each cactus is checked almost daily from the beginning of April through the end of July by science interns and community volunteers, who use giant selfie sticks to take high-resolution photos of the top of every stem.

The goal of the long-term study is to learn more about how saguaros grow and reproduce under different conditions, including those brought on by human-caused climate change.

So far this year, the plot has produced less than a quarter of the flowers researchers have seen there in previous years, and the bloom appears to have reached its peak.

Saguaros generally flower in early May and bear fruit in early summer. Their waxy white blossoms open at night and only stay that way for about half a day — just long enough, if they’re lucky, to be cross-pollinated by a bee, bat or bird.

Swann said the cactuses that haven’t produced buds by now are unlikely to bloom at all this season.

Research ecologist Bill Peachey starts looking for buds on his saguaros in mid April and usually spots his first flower by May 5.

He has scarcely seen a thing this year on the 2-acre patch of desert he’s been studying near Colossal Cave since 1997.

His scientific plot contains 139 saguaros with 403 individual stems, but so far he has found just four flowers on a single cactus and a handful of buds that were gobbled up by insects before they could develop any further.

“It’s pathetic,” he said after his latest trip out there last week. “I’ve never seen it like this.”

During a typical spring, he has to check his plot every other day to keep up with all the flowering activity. He is only making weekly visits this year, because there’s so little to record.

Peachey said his “spies” across the region are reporting similar conditions from north of Phoenix down into Mexico. “The only place that I’ve heard of that has even close to a normal bloom is the west side of the Tucson Mountains,” he said.

In an average year, the saguaros on Peachey’s east-side plot produce about 6,500 flowers. In 2021, they cranked out about 12,200, their second highest total in 25 years of recordkeeping. The blossoms were packed in at the tops of the stems and dribbling down the trunks in an unusual, side-blooming display that was also seen throughout much of the plant’s range.

And that came on the heels of another saguaro surprise: a rare crop of autumn flowers in 2020 that sprang up on scattered cactus around Tucson. Several researchers, Peachey included, called it the largest offseason bloom they’d ever seen.

Experts don’t know why saguaros are acting so weird lately, but Peachey suspects some combination of extreme heat and extended drought could be messing with the plant’s growth patterns — something that also influences when, where and how much they flower.

“They over-reproduced last year, and they just don’t have the gas this year,” Peachey said. “We didn’t get any (winter) rain out there, so they’ve decided to take a break.”

He’s more worried about what this will mean for the birds, bats, bugs and other critters that rely on the saguaro for nectar or fruit.

“A whole bunch of them are going to be shortchanged this year,” Peachey said.

Here are a few things you might want to know about saguaro cactus blooms in Tucson and Southern Arizona. Some spoilers: Peak blooming is now through early June and the flowers smell like melon.

What to plant this monsoon season + summer gardening tips 🌱

Monsoon season officially starts on June 15. Here are a few tips and tricks to help you have a successful summer gardening experience in Tucson.

For Star subscribers: Residents and researchers are learning a lot as they follow a GPS-collared bobcat and her kittens through a gated community on the west side of Tucson.