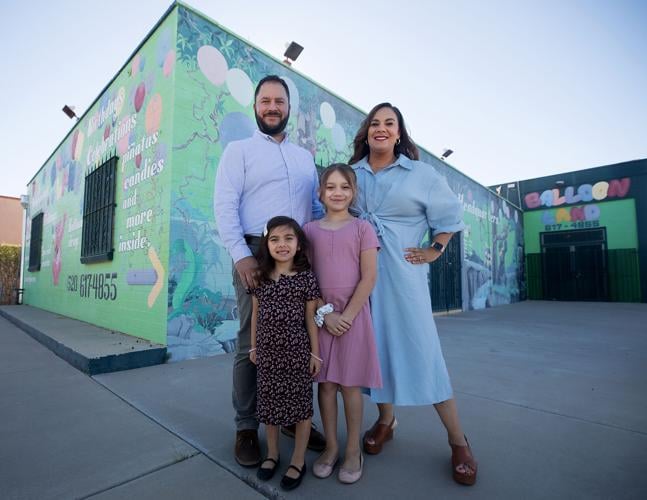 Abraham and Selina Barajas plan to open Luna y Sol Cafe next fall. The South Tucson shop is named after their daughters, Mia Sol, lower left, and Sofia Luna. The property has been home to Balloon Land — a party supply store, as well as a tire shop and music and video store. 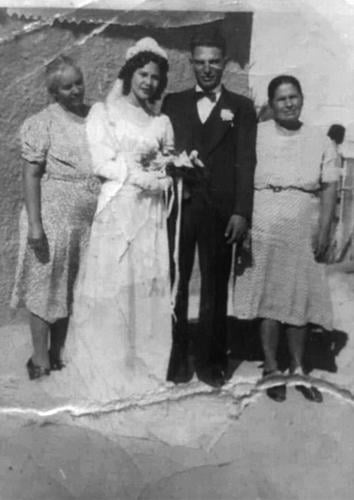 Erlinda and Frank Gallego, grandparents of Selina Barajas, on their wedding day in 1921. The wedding was held in the back yard of a house nearby. In the photo, the couple is flanked by their mothers, Artemisa Gastelum, left, and Mercedes Gallego, right. 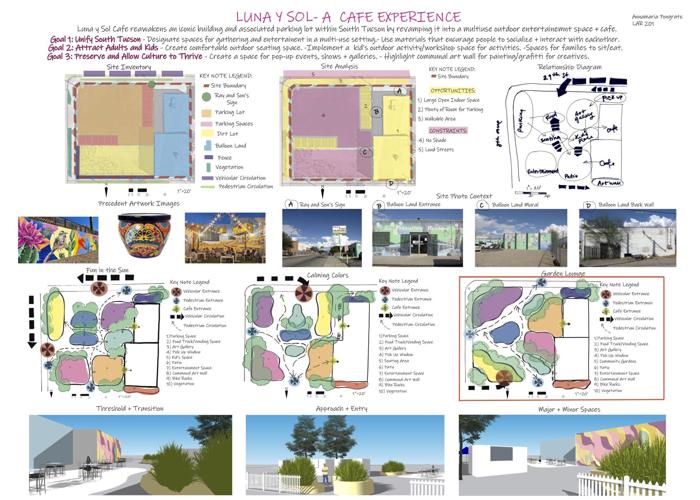 Concepts for Luna y Sol Cafe from students of the UA College of Architecture, Planning and Landscape Architecture. 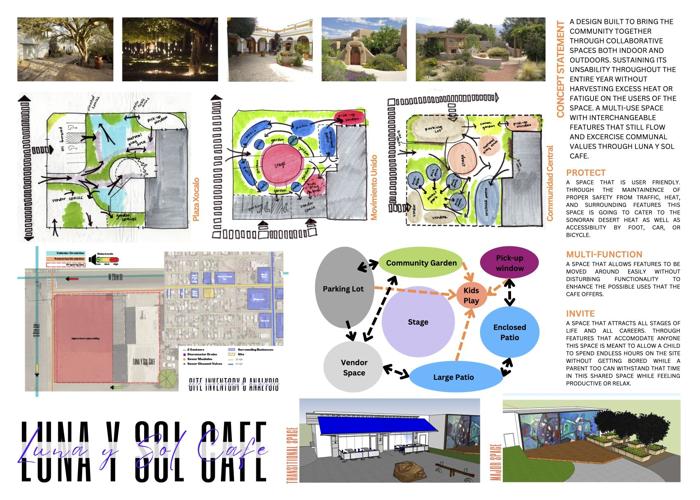 Concepts for Luna y Sol Cafe show how the space aims to serve as a community hub.

Selina Barajas has deep roots in the city of South Tucson, and those roots along with a strong belief in community and economic development are driving her and her husband to open a coffee shop — Luna y Sol Cafe — in a 3,000-square-foot building.

Selina and Abraham Barajas are the founders and owners of Luna y Sol Cafe, named after their young daughters, Sofia Luna and Mia Sol, who the couple see as carrying on the family's legacy. Selina, who turned 38 on Thanksgiving Day, is chief executive officer and Abraham, 39, is chief financial officer of the future cafe at 137 W. 29th St., west of South Sixth Avenue. The couple expects to get the keys to the building next month and open next fall.

The building will undergo renovation and recently served as Balloon Land, a party supply store operated by Gabi Reyes. Reyes' father, Ray Medrano, constructed the building that originally opened five decades ago as a tire shop, and then became a music and video store before it transformed into the party supply store.

"My dad was a landscaper and he would go sell items at a swap meet at the old Greyhound Park. He saved the money from sales and bought the land and built his business. The family helped him run the businesses over the years," explained Reyes, who was involved in all the enterprises. Her father died in 2009 and her mother died a little over a year ago.

"I always wanted to sell to somebody who would stay in the community and help South Tucson. Selina won me over. She was the answer to my prayers because she cares about this community and is giving back," Reyes explained. "She has organized several pop-up events for small businesses and vendors in South Tucson, and on Tucson's south side. Selina has sold clothing out of her business, Mi Reina Mobile Boutique, and has held events and fundraisers to benefit youth in this community."

Reyes, however, isn't leaving the business scene, purchasing The Ambassador Event Center, a venue on Tucson's southeast side for weddings, celebrations and business gatherings. "I cannot run two businesses. Selina is perfect for South Tucson; and the community is excited about the coffee shop," Reyes said.

Betty Villegas, director of housing and community development for South Tucson, said the cafe will fill a void in the city. "I am really excited about this coffee shop. We don't really have a place to have meetings or to gather around here. This is a great opportunity for the residents to have a place to meet with neighbors and organizations," Villegas said. "This coffee shop is more than just a business for Selina. It is a way to build community."

Barajas remembers as a child hearing stories about the one-square-mile city from her grandparents who raised their families there, along with her great-grandparents. The stories were about vaqueros working on ranches, and construction workers who helped build the Tucson area where they raised their families during a time when it was safe for their kids to play outdoors, running after balls, playing tag and hide-and-seek.

She treasures a family photo of grandparents Erlinda and Frank Gallego on their wedding day in 1921 at a house two blocks away from their soon-to-be cafe. In the photo, Selina's grandparents are flanked by her great-grandmothers, Artemisa Gastelum and Mercedes Gallego. Her family's roots were tied to the area before it was first incorporated into a city in 1936.

Barajas grew up on Tucson's southwest side, graduating from Cholla High School. When she was a student at the University of Arizona, a professor asked students if they had money to invest in a business what area of Tucson would they choose. At the time, the Spectrum shopping center, near Irvington Road and Interstate 10, was built and anchored by Target and Home Depot, then later came Harkins Theatres and J.C. Penney, along with businesses including Ross, Olive Garden and other restaurants, clothing stores, and Food City supermarket. It was a hit attracting thousands of shoppers, including shoppers from Mexico, that before had to travel to Tucson, El Con and Park Place malls.

"I thought to myself 'does he think Hispanic families don't eat or shop or buy clothes? Does he not know the thousands of vehicles that travel West Irvington and West Valencia roads everyday?'" She said that "no" from that professor motivated her to prove them wrong.

The University of Arizona grad who received her master's in urban planning from UCLA points to the growth that has happened with housing on Tucson's southwest side, and the growth of shops at Spectrum, and the booming businesses north of the shopping center. She said finally developers woke up and saw the potential for growth and the commercial needs for families.

Her husband, who has worked for Trader Joe's for 20 years, is right by her side.

"Getting our commercial building is exciting. We understand that not everyone can have an opportunity like this," he said.

Abraham grew up in the Los Angeles area, a first generation Mexican-American, and he is grateful to his parents who took a risk coming to the U.S. for more opportunities.

"Maybe that's why I feel excited knowing that starting this business with Selina is a step in the right direction to building a better tomorrow, not only for ourselves, but for our girls, too."

He said he has learned the retail business at Trader Joe's, and the importance of customer service. Those values will be applied at the coffee shop to "offer not only a quality product, but also a great neighborhood feeling. We want to get to know our community and make everyone feel welcomed. We won't just be a coffee shop. We will be a hub for the community."

The couple lived in Los Angeles County for 10 years, and bought a home in Inglewood. They went to Latino-and-Black-owned coffee shops daily and saw the shops as hubs for students, artists, business owners, city officials, professionals, blue-collar workers and families. They see Luna y Sol Cafe filling that void in South Tucson and attracting customers from the south and west sides. The pair have a team behind them that consist of a coffee consultant, manager barista, web designer, accountant and business attorney.

The business owners did a feasibility study and found that there are five Starbucks and Dutch Bros. south of 22nd Street that are top-selling stores in the city and state. The study also found that 74% of Hispanics drink coffee daily.

In addition to coffee, beverages and pastries, they plan on having food trucks on the property selling a variety of meals. The couple foresees the cafe having an indoor meeting space, and also an outdoor seating area for customers, including a play area for children, and an area for entertainment.

Their visions were shared with University of Arizona landscape architecture students taught by adjunct lecturers Alexandra Stoicof and Nolan Bade in the College of Architecture, Planning and Landscape Architecture. The students came up with designs from which the couple can choose ideas to finalize their own design for the outdoor space and parking lot.

Barajas entered a Startup Tucson competition for businesses and won a $5,000 United Way Social Impact Award that was announced at the TENWEST Festival earlier this month.

"The Social Impact Award means a lot to us because we will put the money back into the soil at our site. South Tucson needs more green infrastructures such as trees, vegetation, shade and outdoor gathering places. I want the cafe to be a multi-generational experience," she said.

The TENWEST Festival is co-led by Startup Tucson, a community-oriented nonprofit that is committed to supporting entrepreneurs, and the UA Center for Innovation, which aids business people through structured programs to help them turn their ideas into solid enterprises.

You can hang out with around 30 cats at midtown Tucson's El Jefe Cat Lounge. Soon, you'll be able to drink a cup of coffee, too.

Find Indigenous pieces at this new store on Tucson's south side

Clothing, jewelry, art pieces and more by Native American artisans can be found at the nonprofit Native Music Coalition's trading post on the south side.

Carmen started at the Star in 1981 and covers diversity and inclusion. She wrote “Mama’s Santos: An Arizona Life”, a book about the Mexican and Mexican-American experience in the Southwest through stories about her family. It won 11 awards.