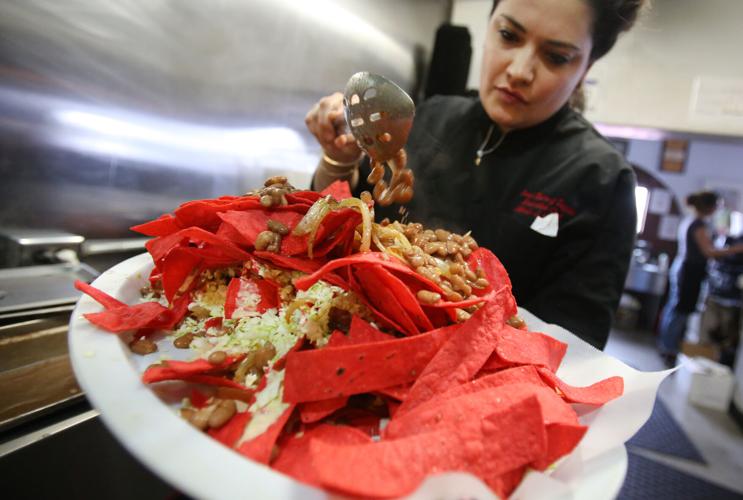 Owner and head chef Maria Mazon adds a layer of pinto beans as she assembles a nachos plate at Boca Tacos y Tequila. 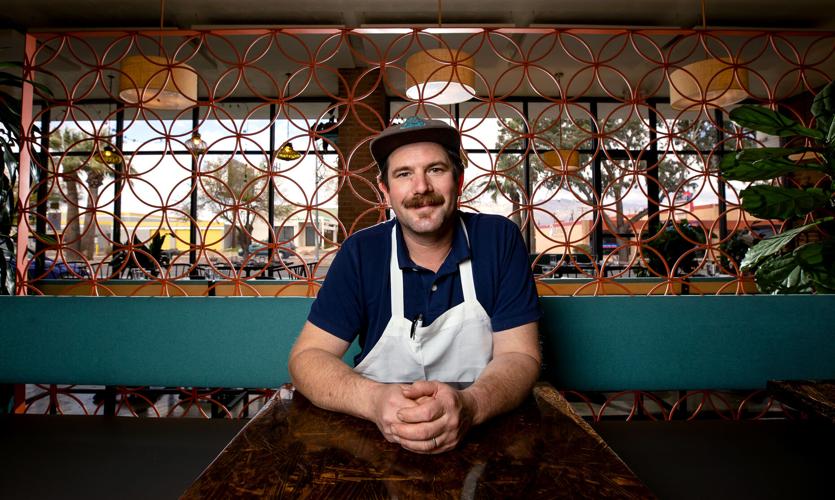 The James Beard nomination in February was a first for John Martinez, owner and head chef of Tito & Pep at 4122 E. Speedway. 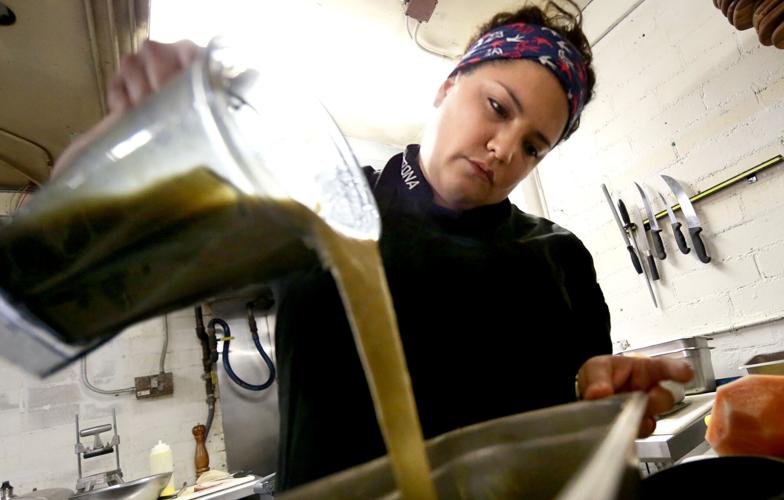 Chef Maria Mazon mixes up a new batch of one of her unique salsas at Boca Tacos y Tequila.

Two local chefs, John Martinez of Tito & Pep and Maria Mazon of Boca Tacos y Tequila, were named semifinalists in February. Although they didn't make it to the finals, here's a look at their journeys.

“I wanted to make a Tucson restaurant.”

When John Martinez was a young cook in the late ‘90s, he noticed a lot of the most ambitious restaurants in Tucson seemed to be of somewhere else.

“It was like someone saw a menu or a concept in a different place and decided to bring it here,” he said.

“I wanted to make a Tucson restaurant,” he said. He knew he wanted a restaurant, the kind where a family and a neighborhood can make generations of memories — a gathering place. While he was earning his credentials in fine dining at resorts, he felt like there was a creative ceiling in Tucson.

“Mesquite, cilantro, lime — these are the kinds of ingredients our region has an affinity for,” he said. Why wasn’t he seeing them in fine dining?

He'll tell you he grew up cooking with his grandmother. When she was young, relegated to babysitting, she made up stories for her younger sister, of the adventures of a rich girl and a poor girl who were best friends. Those girls would later be the inspiration behind his James Beard semifinalist restaurant’s name: Tito & Pep.

When he was a kid, John’s family had a compound in Tucson’s Barrio San Antonio. The houses were centered around his father’s construction business. The warehouse had an industrial kitchen where the whole family would gather to cook.

“Between birthdays, holidays, U of A games, we always had an occasion to bring everyone together,” he said. His regular dining table would be packed with 10, 15 people.

He left Tucson for New York in the early aughts, inspired by the menus he saw in restaurants there. He got a job with French chef Jean-Georges Vongerichten that sent him across the world, opening glamorous restaurant concepts and ambitious resort dining programs. He came back to Tucson to raise a family in his hometown.

He calls Tito & Pep a midtown restaurant, a micro-regional identity that is more than cute. He wants the place to become a neighborhood institution, like Kingfisher and Feast. The menu uses classical Tucson concepts to elevate a no-nonsense menu: the shrimp dish’s corn dumplings are a variation of his family’s tamale recipe. The steak entree comes with roasted chiles and charro beans. The mid-century decor is not just trendy; it’s inspired by the visual culture of the neighborhood, where John lives with his family.

If you pull up in the afternoon, you’ll smell the mesquite smoking in the back of his kitchen. He’s probably in the back, butchering pork chops in anticipation of dinner service, listening to music that chills him out, a shuffle playlist with a theme like Lou Reed.

It might almost feel like a routine, something that John had barely secured when the pandemic hit — 16 months into opening Tito & Pep. Since, he said, it’s been steering from blind corner to blind corner.

Now two years later, he just eked out enough stability to take a two-day weekend, Sundays and Mondays — but we spoke on a Monday, and after he had a business meeting lined up.

When three-year old Tito & Pep was declared a James Beard semifinalist in February, the restaurant had survived most of its young life under pandemic conditions.

John has had to adapt before. He was going to make the move to New York when 9/11 hit. He had to pivot: for months, he worked at his dad’s construction company until a friend offered him a job at the restaurant he was running in Sedona.

He told me that the pandemic was different, harder. It changed every aspect of our lives. He owned a business. Staff relied on him. His family relied on him. There was no room for failure. His lodestone was always hospitality, asking himself, does this make people feel comfortable here? Does this make them feel safe?

During the height of the pandemic, this meant making sure his to-go menu was affordable for people dealing with economic uncertainty; that the foods were comforting. Now it shows in little ways: when he noticed I approached Tito & Pep with a mask, he put his own on.

While simple, these adaptations are not always easy. John has dealt with workaholism before. Finding balance amid daily tumult is more of an ongoing process than a nirvana.

He finds rest in the moments in between. Going on neighborhood walks with his dog.

“You know Santa Cruz Chile Factory? We use a lot of their product, and I like to be the one to go to Tumacacori to pick it up,” he said. The spice shop is located an hour south of Tito & Pep, off the Interstate 19 to Nogales.

“Grabbing a slice from Dos Cabezas on the way back? Maybe taking the road through Patagonia on the way home?” he smiled with his voice.

He loves Southern Arizona, going on drives where he calls home. In the summer, during monsoons, he likes to drive his family down to the Chiricahuas to watch the rains come down the desert slopes.

But to unwind today, he’s going to go home and spend some time with his extended family, the people who inspire his love for cooking. “We’re going to go to my uncle’s house,” he said. “He’s the one with the pool.”

“I just want to make a name for Sonoran food.”

Chef Maria Mazon’s staff works with her, not for her.

“I’m on the line too. We’re elbow to elbow. It’s my responsibility to be the best shrink, best doctor, best cook, best provider. Because I chose that,” she said.

As an interview subject, she asked about what my day looked like before we spoke, what challenges I might be facing that she doesn’t know about. She wouldn’t brag about being empathetic — “Sometimes I’m not,” she said. “I’m human.”

She continues to choose this work — serving people, managing a team, unglamorous payroll and property management decisions, concocting award-winning menus — because she gets to be in the kitchen.

“The kitchen is a beautiful disaster. I have ADHD. I have dyslexia. I have anxiety ... being in the kitchen calms me down,” she said. “I’m a well-organized disaster. I feel the most tame, the most chill, in the kitchen. Yelling will make you feel better, but it won’t resolve the fire.”

In her kitchen, Boca Tacos y Tequila, Maria has earned the title of James Beard Award semifinalist for best chef of the Southwest — twice. You’ve probably seen her in some form of media junket for the TV show “Top Chef,” where she made it to the top five.

If so, you know the way her voice effortlessly carries enthusiasm. How her abject ambition collides with powerful humility to charm an audience. You can picture the producer watching her screen test saying, “Now this is someone people will want to root for.”

Getting the attention of national awards and outlets is not incidental.

Maria realized she had potential to be a chef when, after working as a cook for a restaurant in the Foothills, she started her own catering company. “I knew that culinary school wasn’t an option for me because I was already a mom,” she said.

So she taught herself, with every resource she could find: cookbooks at the library, YouTube tutorials, going to grocery stores and asking questions. Her fundamentals came from “Larousse Diccionario Enciclopédico de la Gastronomía Mexicana,” which meticulously catalogs “everything a Mexican creator has to work with in Mexico.”

Today, she has been running Boca with the same vision for over a decade. She is grateful for the recent attention, though she also has been seeking to elevate Sonoran cuisine for years. Why now? “Come on,” she said. “Why didn’t we look here first?

“But maybe, maybe, everything happens for a reason,” she said. “Maybe us chefs weren’t ready. Maybe the industry wasn’t ready. You don’t know. I don’t like to question, why didn’t you get here before? I think: they’re looking! Let’s do this!”

She credits her support systems for her success. “If it wasn’t for Eddie, Miguel, and Andy, who have been with me — See, I talk about them, and I get all choked up. It’s beautiful — I wouldn’t be anywhere. Sometimes I do want to kill them, as I’m sure they want to kill me. But you need support. You need it,” she said of her team.

She couldn’t do her job if she didn’t have her family to come home to at the end of the day, to relax and watch TV with in her fuzzy slippers.

“I wouldn’t be standing on my two feet if it wasn’t for [my partner] Lily and my son. They’re my support,” she said. They remind her when her ego is inflated — “Don’t be conceited, don’t be stuck up.” When she’s deflated, they encourage her: “You can do it. Your food is good. We got you,” she said. “Nobody showed up, what do you need?”

Chef is a gender-neutral term. But it doesn’t always feel that way to Maria, who bristles under titles like “female chef.”

“My wife, she’s not a firewoman,” Maria said. “She’s a firefighter.”

Maria wants to be seen for the quality of her contribution to the food scene, to be known for elevating Mexican cuisine to the national award, fine dining space. She is a woman, yes, and she is more than that, too.

“You don’t have to call me a chef. You can call me a cook, a taquera if you want. I just want to make a name for Sonoran food,” she said.

“It’s a balance. Sometimes you stumble,” she said. “The support I’ve received, not just from the community of Tucson, but from my family and team members. I’ll forever be in debt, because they make me look good.”

She is honored to have made semifinalist, and she believes she’s capable of more. “I was humbled and surprised to get it, but, of course, the 10-year-old me is: ‘you can do it!’ ... I want to push myself to the limit.”

If he wins, Don Guerra will be the first Tucsonan to take home a James Beard award since the owner of Tucson's El Guero Canelo landed the honor in 2018.

Maria Mazon, of Boca Tacos y Tequila, and Don Guerra, of Barrio Bread, have been nominated before but it's a first for Tito & Pep owner John Martinez.

Borderlands Brewing Co. is opening a second location near the University of Arizona and will collaborate with Chef Maria Mazon of Boca Tacos on Tucson's Fourth Avenue.

The James Beard Outstanding Baking Award comes on the third nomination for the popular Tucson baker.