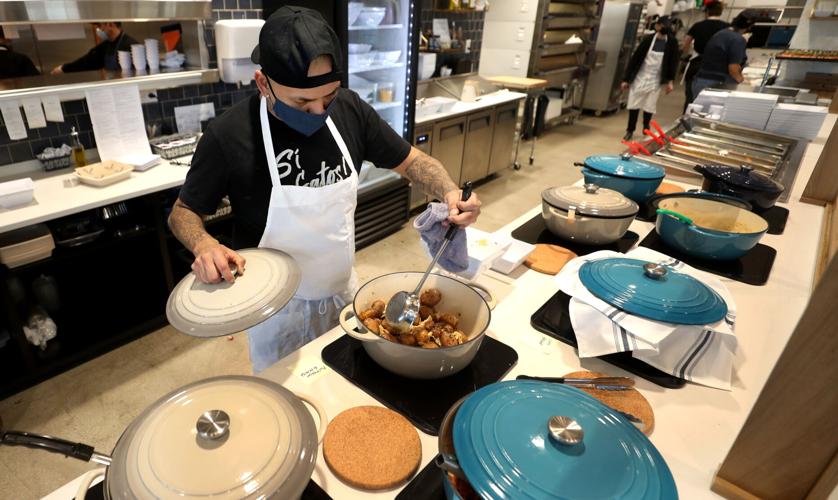 Sous chef Oscar Hernandez checks the Parmesan potatoes on the serving line at a soft opening for The Monica, 40 E. Congress St. 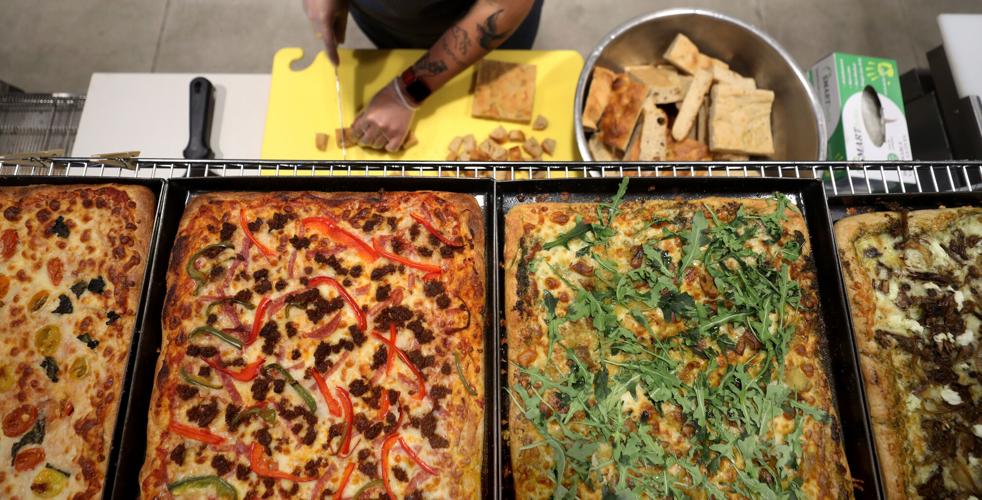 Chastity Tom cuts up bread for bread crumbs near the day's offerings of pantry pizzas at a soft opening for The Monica, 40 E. Congress St. 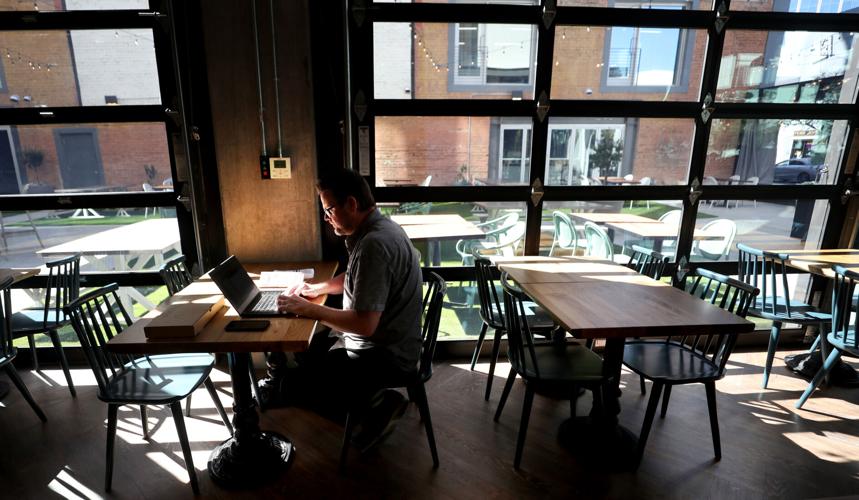 Chris Ahlers gets some work done in the main dining room near the retractable doors to the patio after lunch at The Monica, 40 E. Congress St. 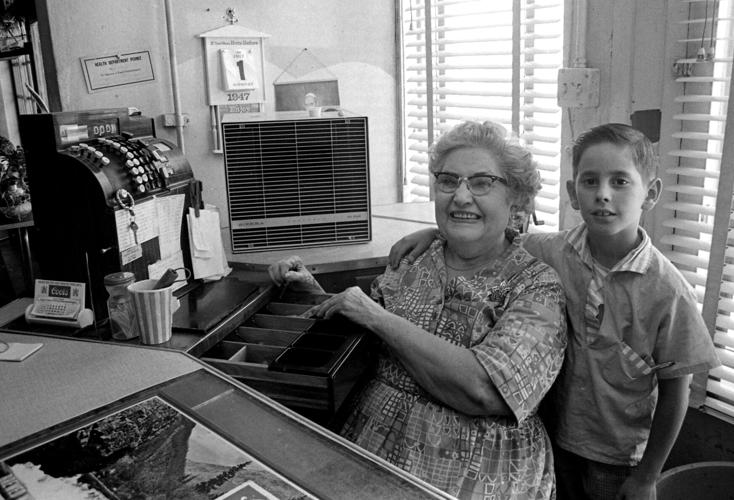 Monica Flin, owner of El Charro Restaurant, 140 W. Broadway, on July 1, 1968, after closing for business. The restaurant was forced to vacate to make way for downtown redevelopment projects, including La Placita offices, which were demolished for another project in 2020. The business started on Fourth Avenue, moved near the Temple of Music and Art in 1930, then the Broadway location in 1935 and finally to the current location at 311 N. Court in 1968. 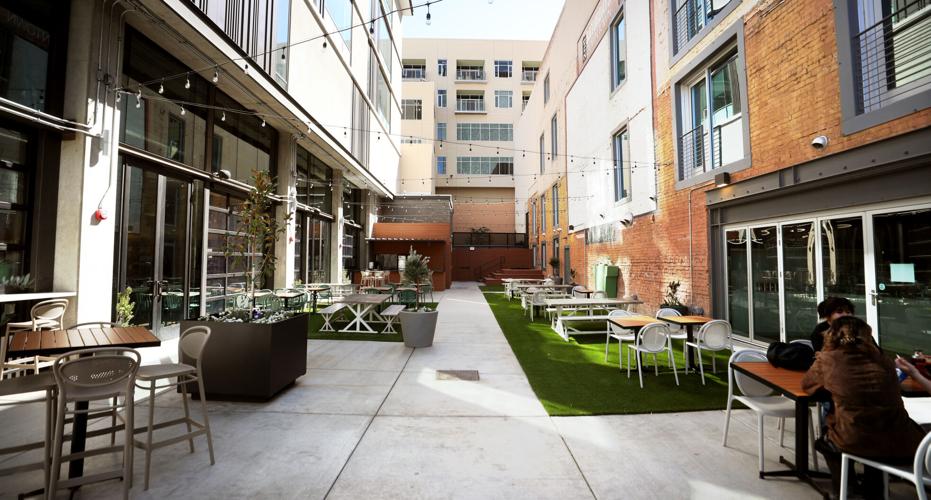 The 2,500-square-foot patio area at The Monica features faux grass and picnic tables. 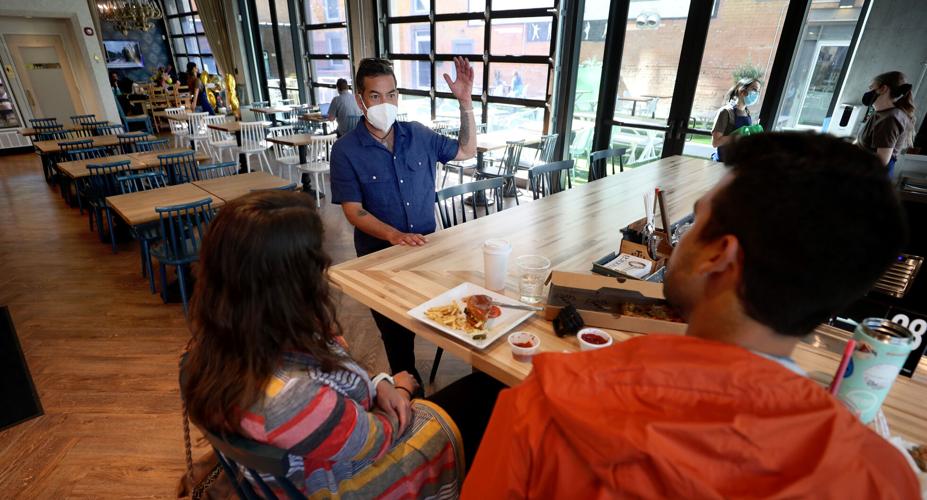 Sous chef Oscar Hernandez checks the Parmesan potatoes on the serving line at a soft opening for The Monica, 40 E. Congress St.

The 2,500-square-foot patio area at The Monica features faux grass and picnic tables.

El Charro Café has kicked off its yearlong centennial celebration of the restaurant and its matriarch and founder Monica Flin with the quiet opening of The Monica.

The sprawling homage to Flin takes up 4,500 square feet on the first floor of the glistening Hexagon building at City Park, 40 E. Congress St., connected to a 2,500-square-foot patio with faux-grass and picnic tables.

The Monica is the cornerstone of the 100th anniversary of the original El Charro, which Flin opened just a few blocks from the new venture in 1922. The flagship restaurant moved a few years later to its current home on North Court Avenue downtown.

Ray Flores, president of Si Charro — El Charro’s parent company — described The Monica as a hybrid restaurant and market that offers packaged spirits and beer alongside grab-and-go meals and snacks, artisan breads baked by three-time James Beard nominee Don Guerra, and full breakfast, lunch and dinner menus that range from quick-fix sandwiches, salads and soups to full-plate entrees that go from the simple — a grilled cheese and soup combo — to the sublime — short rib rústico dressed in a rosemary ancho au jus.

“My goal was to try to get everything done on our menu for between $10 and $20 and no more,” Flores said.

This is Guerra’s second partnership with the Flores family; he also is part of Barrio Charro at 3699 N. Campbell Ave., which opened at the height of the pandemic in September 2020. In addition to the breads, Guerra, who owns Barrio Bread and Barrio Grains, also is making Roman-style pizza featured on The Monica’s stripped down pantry menu that is geared toward customers on a tight schedule.

Flores said he also is collaborating with a handful of Tucson makers including Tucson Tea and Tucson Toffee, whose products are featured in the market side of the restaurant, and will invite local makers, vendors and community groups to participate in “Tucson Tuesdays” on the second Tuesday of the month, kicking off March 8. Flores envisions “Tucson Tuesdays” as a way to spotlight local businesses and community groups, much like Second Saturdays Downtown did for years before organizers were forced to press pause on the event due to the pandemic and have yet to return.

The Monica also will team up with the University of Arizona’s Community and School Garden Program. On Wednesday, March 9, Moses Thompson who leads the UA program will bring a group of kids to The Monica to begin planting a garden at the restaurant.

“(It’s) one of the coolest things we have going for youth in Tucson,” Flores said of the UA program.

Flores said he is in talks with local chefs about future collaborations that could include pop-up restaurants during the monthly Tucson Tuesdays.

Tucson's new Midtown Vegan Deli and Market opened last week with a menu of vegan items that may not sound like typical vegan fare, plus all kinds of vegan groceries.

Squared Up Pizza is the first Sicilian-style pizza place in Tucson. The pizzeria is inspired by Patrick McColley's visit to New York, where he met and recruited multi-generational pizzaiolo Mario Badali to bring his family recipe to Tucson.

New mariscos and oyster bar Cruda is taking up the old location of La Chingada downtown. We talk to the owner behind both ventures in addition to The Neighborhood, Danny Cordova, to learn about his favorite seafood and what inspired the Tucson oyster bar.

Buendia Breakfast & Lunch Cafe is Tucson's new brunch spot. Their bright decor commands as much attention, and brings as much joy, as their inventive menu, with items like tamale-stuffed poblanos alongside traditional pancakes.

The Delta, owned by the masterminds behind popular eatery The Parish, opened in downtown Tucson on New Year's Day with Instagram-worthy dishes. The Delta takes on Southern food from scratch, with a rock star theme.

Looking for fresh pasta in Tucson? Carolyn O'Connor was, so she decided to make her own, first at Ceres cafe, and then at her new Italian restaurant Noodies, in the former location of Bentley's House of Coffee and Tea off Speedway.

Meet 14 Tucson restaurants that opened this winter 2022! The Parish's sister restaurant, The Delta, opened in January. Chef Tyler Fenton, of Reilly's, just opened wood-fired BATA. The owner of Ceres is opening Noodies in Bentley's former location. And vegan baker Houlden's Rise Above is finally getting a brick and mortar!

New restaurant Bata, from the owners of Reilly Pizza, brings a fire-kissed menu to downtown

If he wins, Don Guerra will be the first Tucsonan to take home a James Beard award since the owner of Tucson's El Guero Canelo landed the honor in 2018.

El Charro is celebrating its 100th birthday! Here's how it all started

From feeding construction workers in downtown Tucson, Arizona to a restaurant empire, the family behind El Charro Cafe has persevered and pushed boundaries.