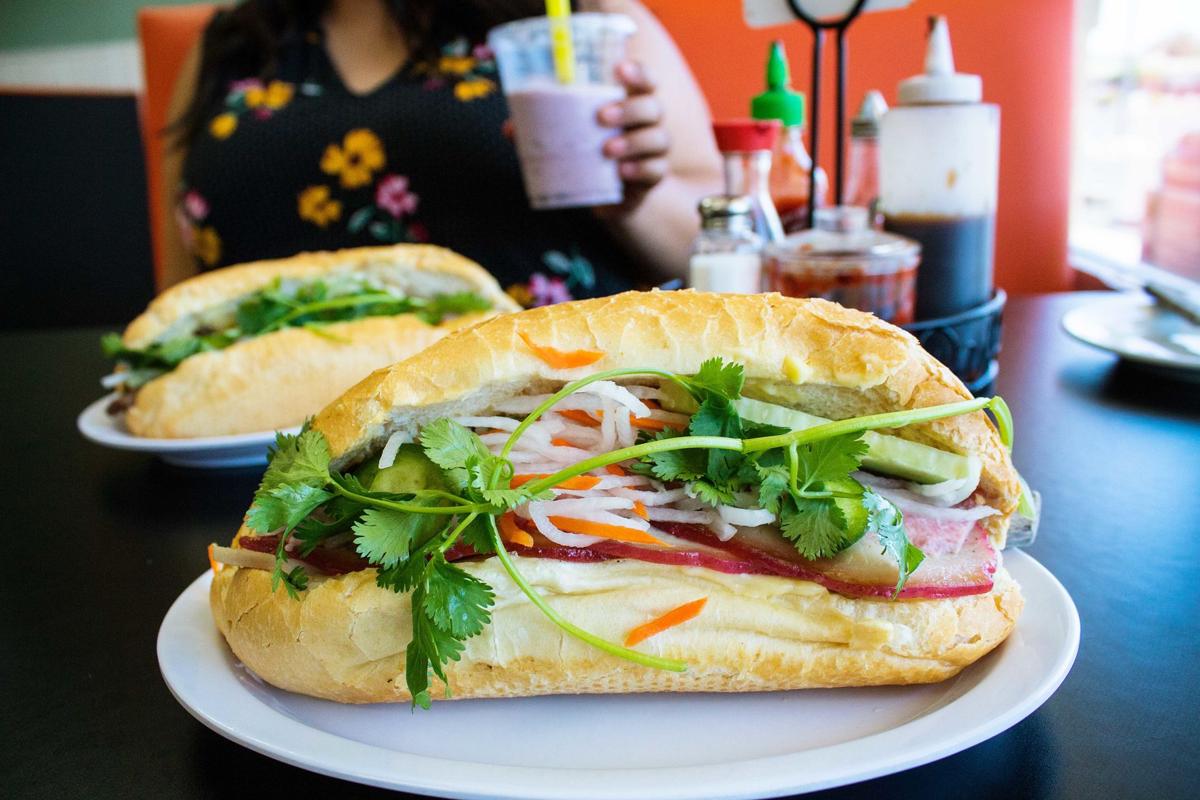 I was bowled over by this combination dặc biệt at Pho Can Tho, $6. 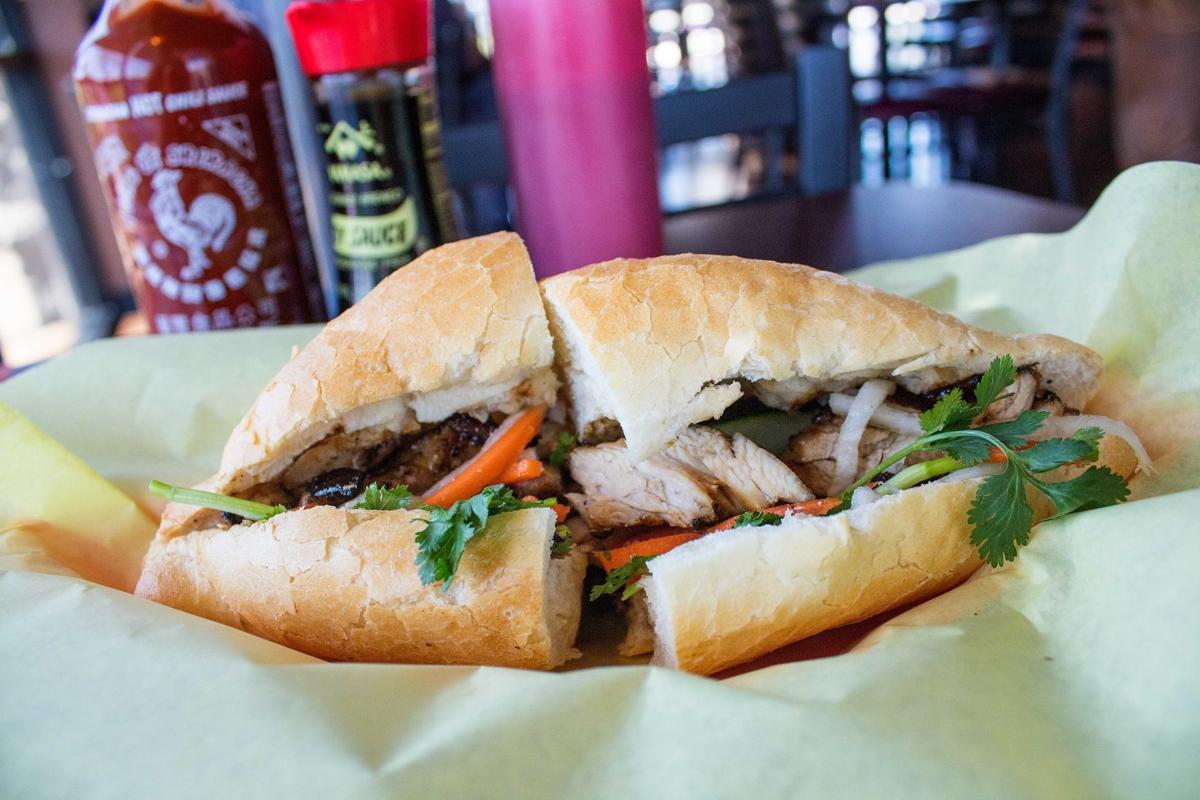 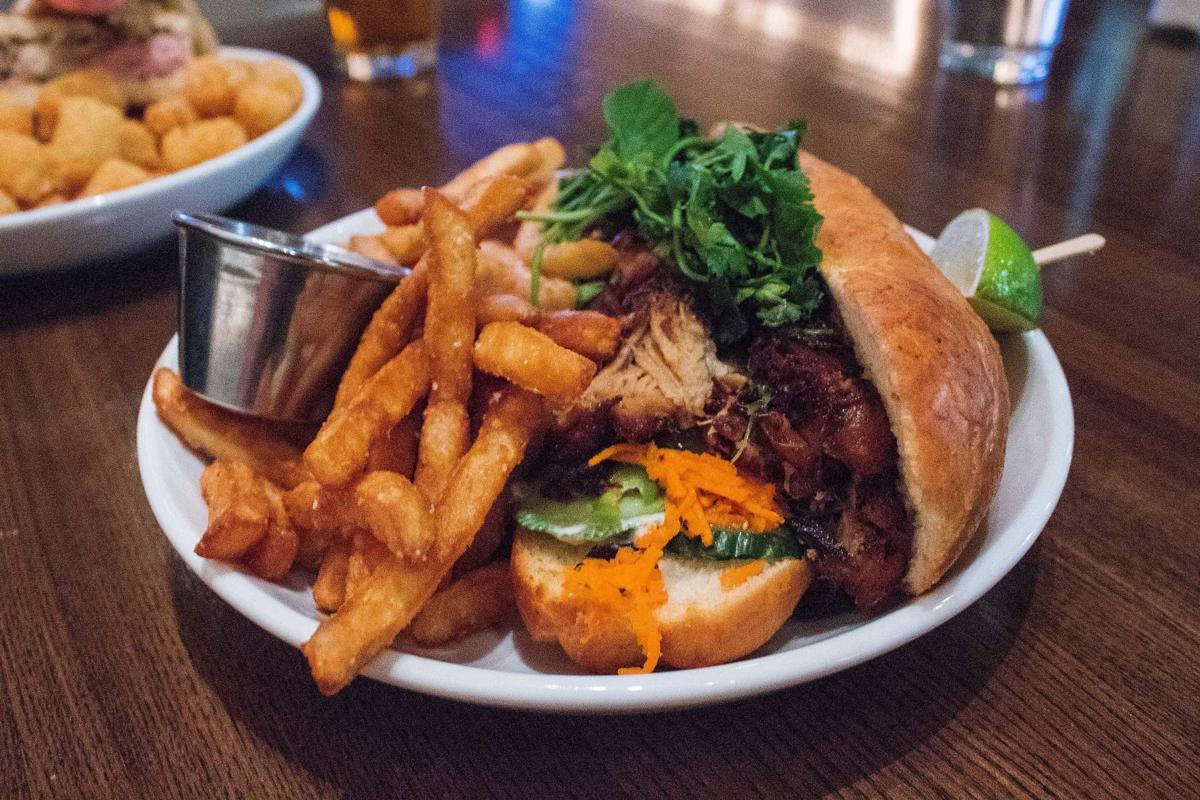 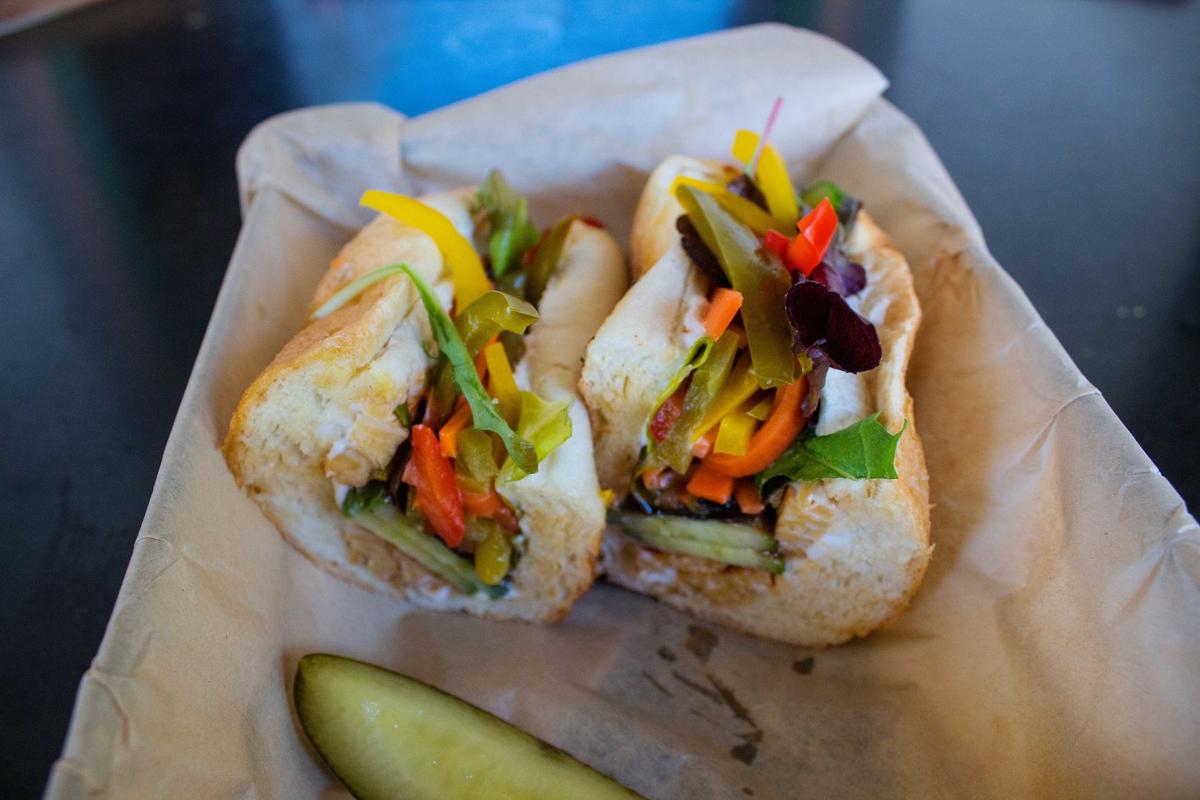 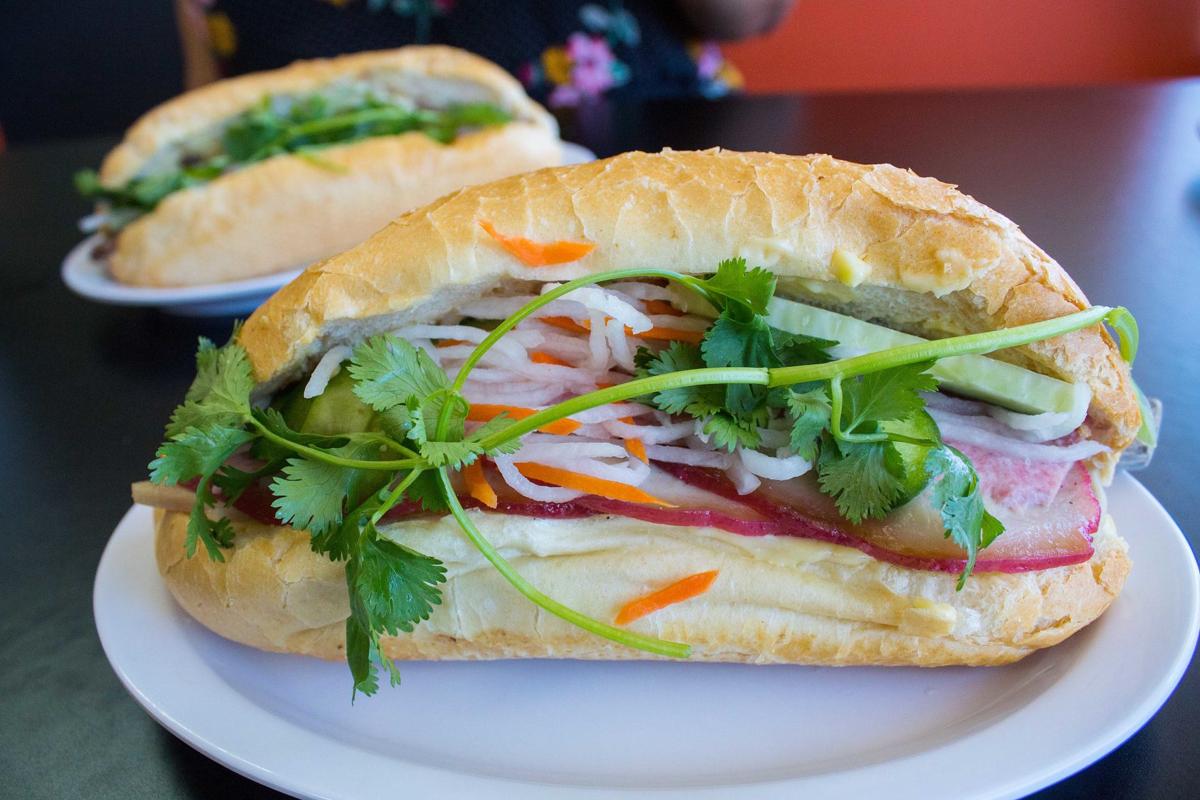 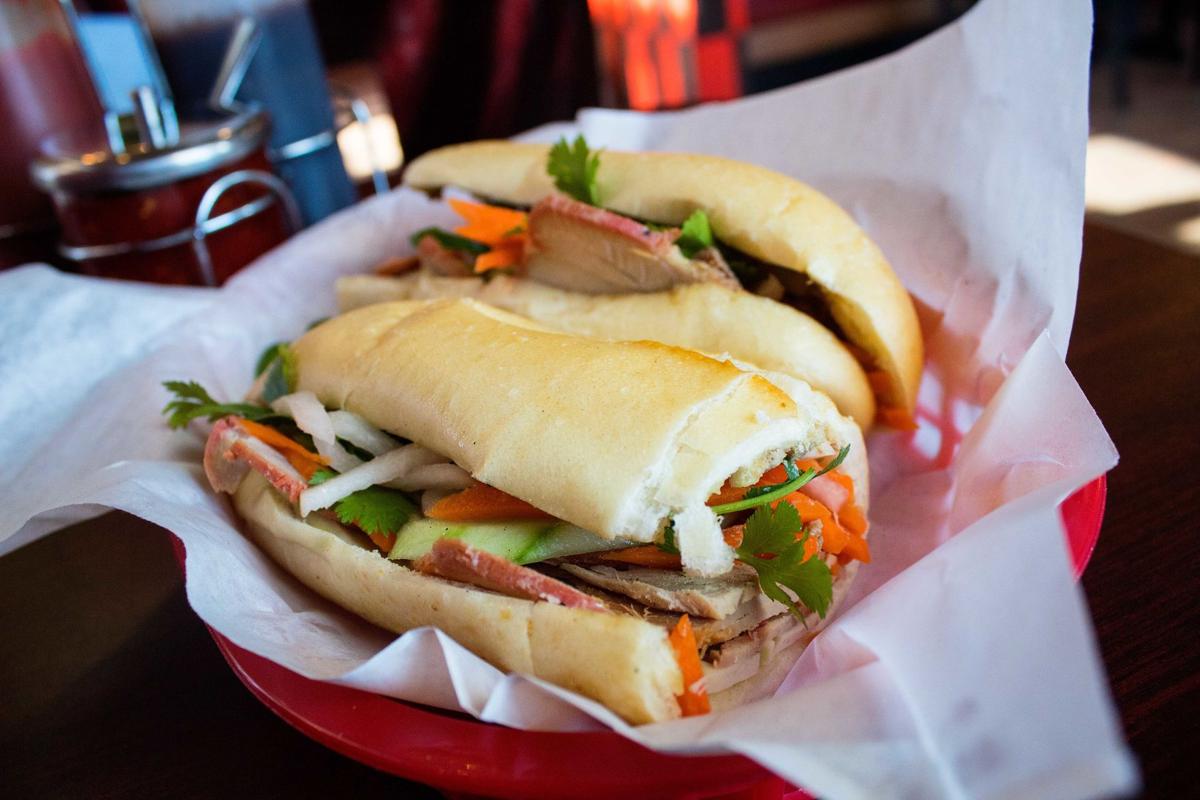 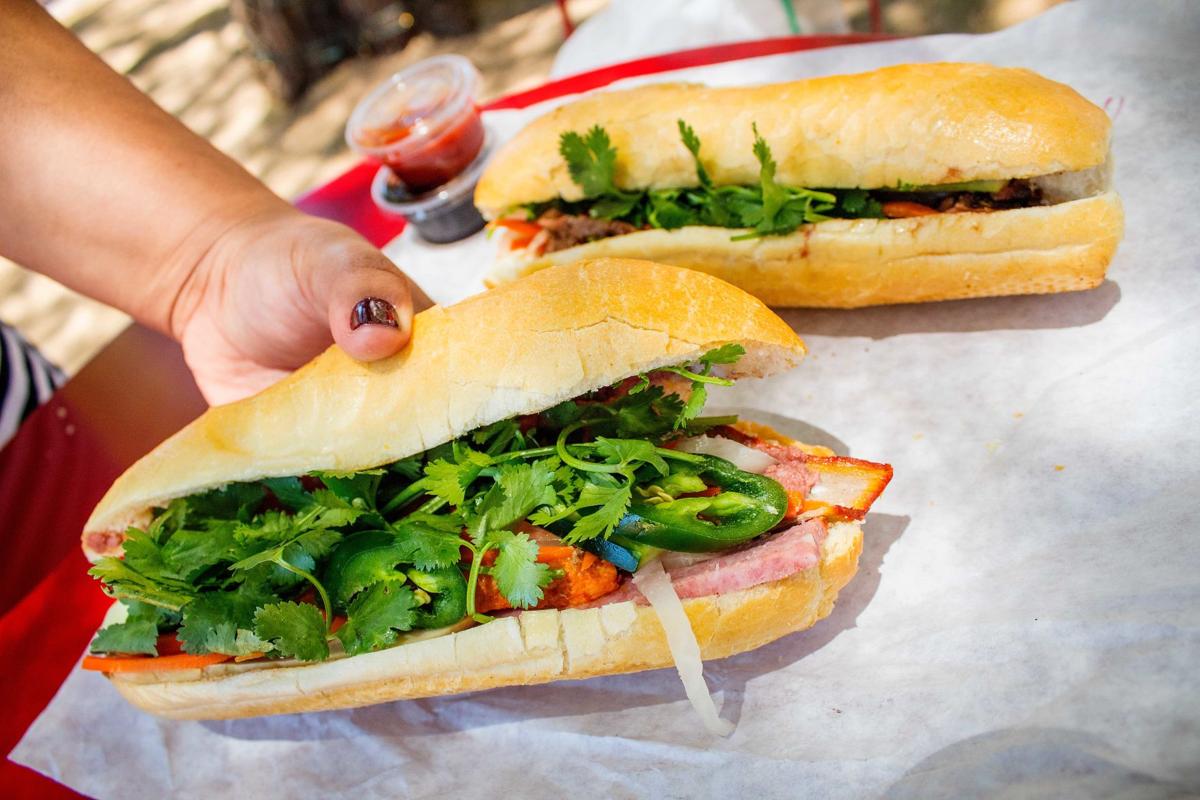 The combination bánh mì at Nhu Lan, $4.50, has been my longtime favorite. 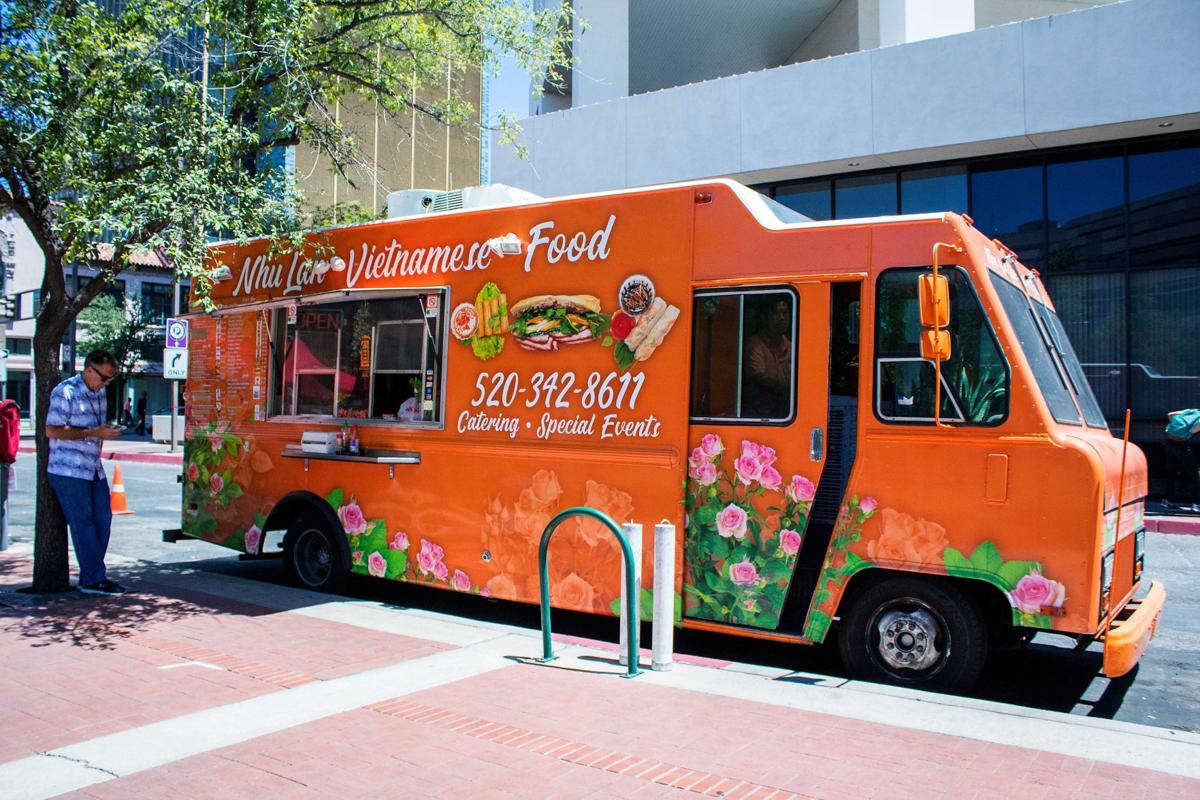 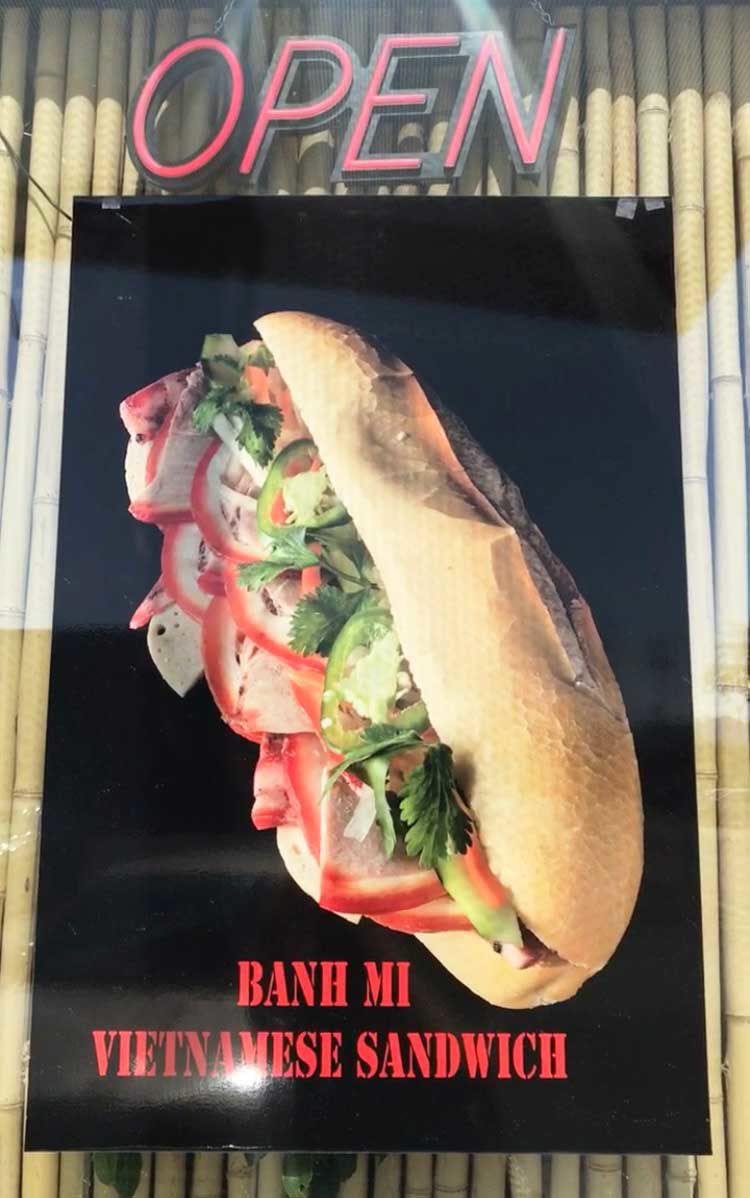 I love how every bánh mì has a different collection of brilliantly fatty meats, often indiscernible but always delicious. The crusty bread with that smear of paté, for those that like it funky. The pickled things, and the pang of the peppers. The fresh flavor in your mouth when you bite into a piece of cucumber or leafy cilantro. Bánh mì is the sandwich that goes in every direction and costs next to nothing.

At least that's how it is in Vietnam, where the baguette sandwich originates. In Southeast Asia people eat them for breakfast or on the street as a snack. We may not do that here, but Tucson does have a lot of places that'll make you a classic bánh mì. (Of course, there are just as many nontraditional and more expensive options, because it's trendy now!)

Pretty much all bánh mìs are good, but how does one become truly outstanding? I did a little research on the matter and this is what I think:

1. The bread must be crispy but still have a lightness to it so that it doesn't constrict or disrupt the harmony of the flavorful ingredients inside. Many of the vendors I spoke to this week get their bread from a single bakery, La Baguette Parisienne at 7851 E Broadway. But even then, their breads still managed to be slightly different.

2. Whether it's the combination lunchmeat dặc biệt or one with grilled pork, chicken etc., the meat should be juicy. Some sandwiches I had this week suffered from dry cold cuts or overcooked meat. As you'll see in this list, you can also make a great vegetarian bánh mì, but everything else has to done with care.

3. Veggies are extremely important, and not just an afterthought. The best bánh mìs had a variety of pickled carrot, daikon radish, cucumbers and even thinly sliced onions. Just having one isn't enough.

During my weeklong search for the best, I wasn't particularly trying to pick a traditional bánh mì. (It just kind of happened that way, sorry guys.) When I went into a place, I usually asked the server what their favorite bánh mì on the menu was and got that. I would first try a bite without any sauces, and then go crazy!

What you'll see here is part of an ongoing sandwich series I'm doing. (Read about the best fried chicken sandwiches here.) This time, the winner surprised me!

A little history: Bánh mì sandwiches are actually a product of French colonization of Vietnam. The French introduced baguettes in the 19th century, but it wasn't until they left in 1954 that the Vietnamese created their own sandwich using European bread and local ingredients. Residents of Saigon replaced butter with mayonnaise, adding lots of veggies and peppers to give it an essentially Asian flavor.

This locally-owned newcomer replaced Pho 88 early last year. And judging by their bánh mì game, they're a major contender for best Vietnamese food in town. Where to start? My server told me that Pho Can Tho makes its own cold cuts from scratch. (They even make their own mayo.) Each of the porky meats in the combination dặc biệt were cut to the same thickness, which helped the whole thing flow together into one meaty bite.

The torpedo roll from La Baguette Parisienne was also the best I tried this week: It was crusty with a center that was airy and supple. At $6, the sandwich was a little more expensive and less convenient than my other favorite, but definitely worth seeking out.

Various locations including The Boxyard, check Facebook for details, 520-342-8611

This local food truck Nhu Lan keeps the spirit and price point of the traditional bánh mì alive. At $4.50 apiece, the combination dặc biệt is most definitely downtown's best lunch deal. (The truck is parked along Jácome Plaza on Tuesdays and Thursdays). The sandwich also comes with housemade cold cuts including head cheese, ham and barbecue pork. But Nhu Lan kicks it up a notch by making its own bread as well. Their sub rolls are a little bit thinner and crispier, almost like a really good Jimmy John's sandwich. Just remember to call ahead, they're always busy!

Other banh mi sandwiches I tried:

If this sandwich were bigger, it would have been one of my favorites. But Dao's Tai Pan's serves it almost like a snack, which is great if you're really there for the bún bò huế. The restaurant has several varieties including the combination, barbecue and grilled pork, but I opted for the chicken this time. It was juicy and perfect, but I wanted more of it. Next time, get two!

This bánh mì came heartily recommended by my Facebook followers, so I had to give it a try. The highlight here is the 10-hour braised pork belly, which was soft on the inside and crunchy on the outside. Very nice. The bread was on the firmer side, but still tasty. I wish the veggies were a little more prominent and the herbs a little fresher though. Not sure I'd order this one again while I'm at Hub, because everyone knows I'm stuck on the prime fries.

Vina wins the award for most creative bánh mì options in town. In addition to the classic beef and lemongrass chicken, it also does a garlic shrimp bánh mì as well as a lemongrass tofu. I ended up ordering the combination with chicken pate, barbecue pork, ham and head cheese because my server liked that one the best. It was decent overall, but the meats could have been sliced a little thicker to make it more juicy.

The least bánh mì of any of the bánh mìs I tried ... and not because it's vegan. Mainly the amoroso roll they used was on the fluffier and softer side, and the pickled veggies were sweet like an Italian deli sandwich. Also, Maynards uses that crumbly tempeh cake rather than tofu as its protein. A bold choice, but if you've got an open mind, it pays off. I finished the sandwich feeling refreshed, a happy feeling after a week of cold cuts.

We spent a week eating all the fried chicken sandwiches we could find.

Hit them up during their grand opening June 17.

This new spot on Grant Road serves dumplings and stews from Dongbei, China.

Is tableside guacamole the Shakespeare of 2019? We've settled the question of "to be or not to be," but the pure theatricality of smashing an …

If you squint your eyes real tight and try to remember things not posted on your Facebook wall, there's a chance you can bring back your first…