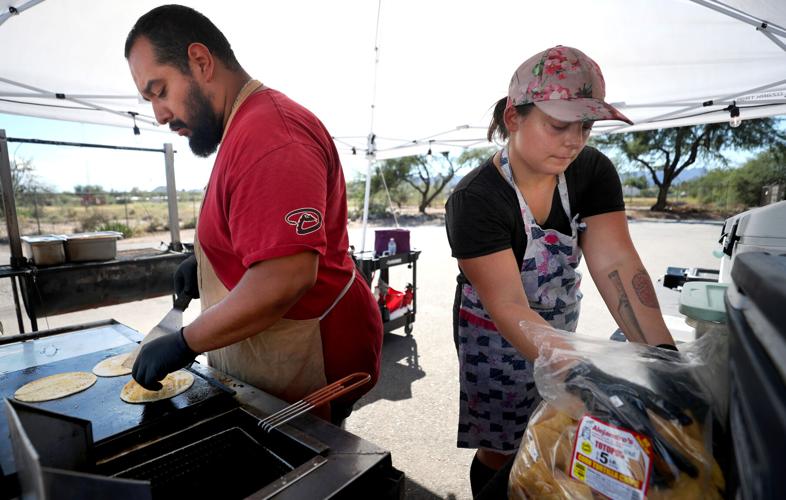 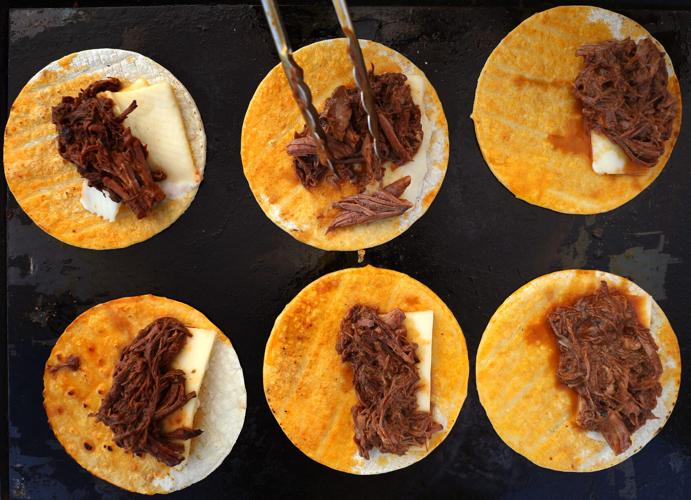 A double order of El Jefe, beef tacos with Muenster cheese and tortillas braised with a red salsa are on the grill at Muncheez, a food stand owned by Aurelio and Morgan Garcia.

The fries were the first to sell out, about 90 minutes into the night.

Word has gotten out about Muncheez, the late-night nosh stand Garcia and his wife, Morgan, rolled out six months ago.

“When we sell out, I feel like I’m on cloud eight. I’m super happy,” Aurelio Garcia said on that Thursday night in late September as he attended to a small but consistent flow of outside Danny’s Baboquivari Lounge on East Fort Lowell Road. “To get on cloud nine, I would’ve wanted to feed those last four or five people in line.”

With a canopy to block the heat, a classic Santa Maria grill, a few tables and a red food cart, Garcia and his wife spend a lot of their evenings stationed in front of popular breweries, private events, or dispensaries around Tucson.

Their hope is that people will stop by Muncheez food stand for some sizzling carnitas tacos with colorful flavors of salsa de aguacate, or a juicy all-grilled beef burger served with crispy fries or a mac salad.

The couple, who have a 3-year-old son, opened Muncheez in May. For Morgan Garcia, “it’s kinda like having a second kid.”

Since opening, Muncheez has had to overcome challenges that are unique to operating a food stand versus a food truck.

“We’re a broken-down kitchen, but a little bit more exposed to the elements,” Aurelio Garcia said.

On those crazy windy weather days in Tucson, Garcia might have to hold down the canopy while his wife cooks. For Muncheez, the show must go on rain or shine.

Another big challenge the couple faced was being able to compete with their competition — food trucks.

Luckily for Muncheez, the couple has experience in the kitchen.

The couple’s background in cooking dates back to working alongside each other at various restaurants including Mama’s Hawaiian Bar-B-Cue and Union Public House.

Auerlio Garcia took culinary classes in high school and later worked with the chefs at the historic Mountain Oyster Club.

“When I got hired there, it was the first time I felt validation in my cooking,” Garcia said.

The pair’s background in cooking allowed them to envision an idea that could compare to food trucks without all the fancy logos, stickers and an actual truck.

The menu was birthed from close consideration and branches from two of Garcia’s favorite comfort foods — burgers and tacos.

Aurelio Garcia’s favorite Muncheez O.G. burger is smeared with a sweet and spicy bacon jam and Muenster cheese steamed for a perfect pour-over effect on a Sonoran-styled burger bun.

When it came to naming the food stand, the Garcias weren’t really thinking about how the name might appeal to people with the munchies.

However, with marijuana being legal in Arizona, Aurelio Garcia said they don’t shy away from that crowd.

“We love all people, and whether that (means) serving up at a brewery or a dispensary, we’re Muncheez for a reason,” he said.

The couple plans to expand the operation as business grows.

“We have this huge trailer and we’ve always wanted to remodel it and there would be tables inside and outside and definitely an expansion to the menu,” Morgan Garcia said.

“This is really just the beginning for Muncheez,” Aurelio Garcia added.

Cassandra Scott is a University of Arizona journalism student apprenticing with the Star.

Rollies Mexican Patio is opening a spot on Tucson's west side. The menu will feature new items, including birria bánh mì tortas.

Ube Bae Desserts is a homemade, small-batch baking business owned by active duty military member and certified cottage food home baker Brittany Gudino. She makes ube cookies and other treats that are available for pick-up in Tucson, Arizona every week.

A coffee shop is coming to South Tucson, but it's so much more than that

A local family is bringing a new coffee shop to South Tucson, where they have family roots. They hope Luna y Sol Cafe will become a hub for community.