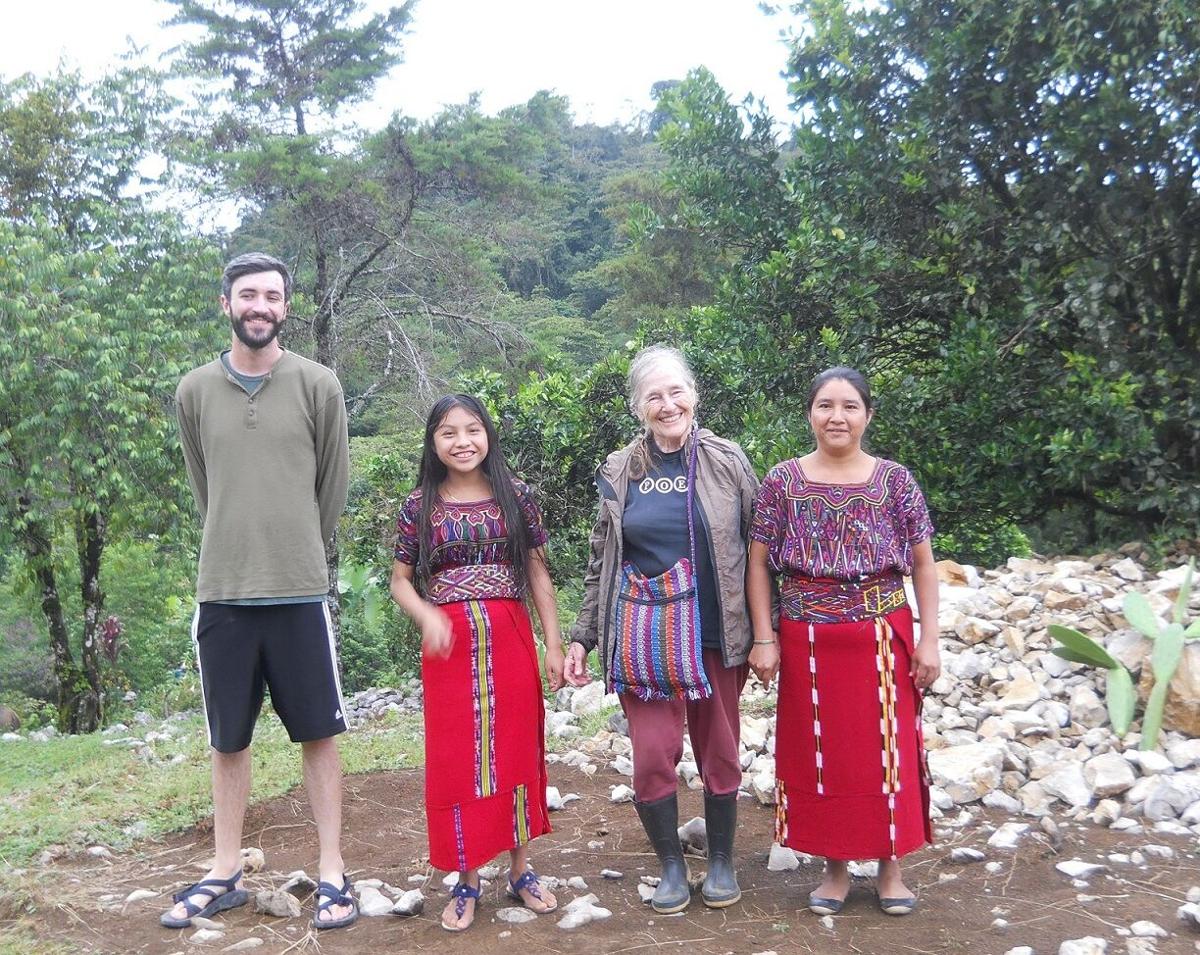 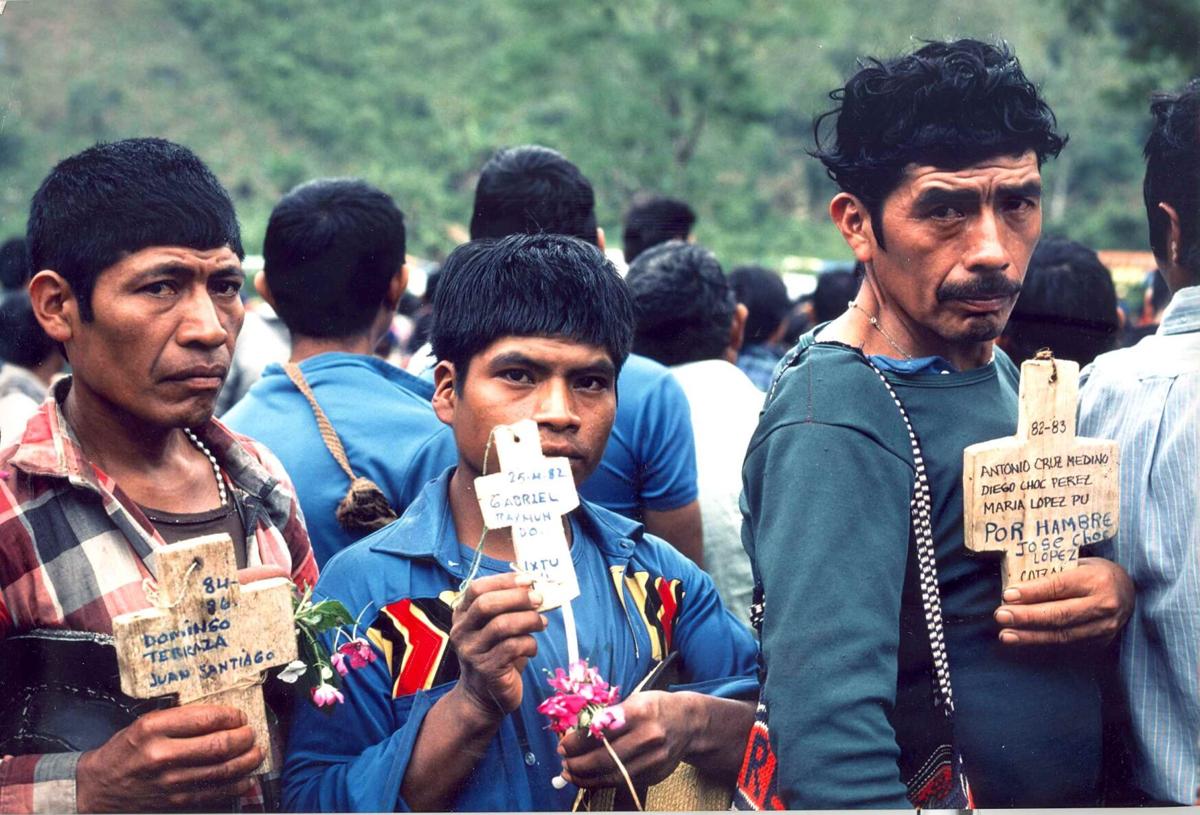 Ila Abernathy took this photo in 1993 during her first time serving as part of a delegation of international observers accompanying internally displaced Mayas in Guatemala as they walked to their home villages. Names of family members murdered are on the crosses.

For decades, 78-year-old Tucsonan Ila Abernathy has committed herself to social activism.

Though the project coordinator of St. Michael’s Guatemala Project says it can be tempting to get sentimental about the plight of people in need, she instead exercises respect and love for the communities she serves.

“There are consequences when community members open their homes to you,” she said. Being sentimental has no place in that relationship.

But she also admits she has made dear, life-long, family-level friendships with members of the Maya Sierra Guatemala community.

At this interview, Abernathy was only three days returned from a seven-week stint in western Guatemala. Since 1993, she has made the trip at least 35 times. In the first, she joined a group of Mayas walking back to their home villages after having been driven out by government militias.

Abernathy doesn’t seem a natural to be found traipsing around Central America. Born and raised in near-rural Georgia, in a typical 1950’s patriarchal, Southern Presbyterian home, she had never left the Deep South until she went off to Smith College in Massachusetts. There, she said, she experienced serious culture shock (“but the term hadn’t even come into vogue yet.”). She came to Tucson after graduation and has been here ever since.

After earning a master’s degree in English lit, Abernathy took a job with the Intermountain Centers for Human Development, where she worked with court-adjudicated Native youth.

“That was my first career,” she said. Her second fell into her lap as she waited for assistance at the University of Arizona Poetry Center in 1982. The woman manning the desk was engaged in a lengthy phone conversation, during which she mentioned that she was quitting her job. “Have they found a replacement for you yet?” Abernathy asked, as soon as the woman hung up.

Abernathy had a rewarding 12-year run as executive assistant to Poetry Center Director Lois Shelton. She had studied British literature, but she got to meet “greats” in contemporary poetry as they came through the Center.

But when did the impulse to social activism kick in?

On a trip to Scotland in 1983, looking for traditional music in Edinburgh, she encountered the Campaign for Nuclear Disarmament. She had never given much thought to government policy, Abernathy said, but when she realized “we had the nuclear capacity to kill everything in the world many times over,” she decided to give it both thought and action.

She joined the campaign in the United States, lining up with picketers outside Davis-Monthan Air Force Base (she carried a sign directed at President Reagan, a la Burma-Shave ads: “Ronnie, dear, we’re apprehensive/We think that Cruise is just offensive.”). She participated in a peace march across America — doing the Iowa leg — and organized two peace marches across Tucson. During one of them, on impulse, she stopped in at St. Michael’s and All Angels, and received a blessing from Father Fowler, well-known for his opposition to war.

By the late ‘80’s, Abernathy was attending St. Michael’s; shortly after that, she was invited to join the Social Action Committee. Then, in February 1993, Abernathy got a call: “Do you like to walk?” A delegation of international observers was invited to join internally displaced Mayas in Guatemala as they walked to their home villages, and verify that they did, indeed, belong there. She went. And she walked into the “jungly forests.”

Thus began the St. Michael’s Guatemala Project — a partnership with the Communities of Population in Resistance of the Sierra. The CPR-Sierra is a collection of mostly Ixil and K’iche Maya from the Ixil region in northern Quiché, where the Guatemala military destroyed hundreds of Maya villages and killed or “disappeared” more than 250,000 civilians in the 30-year war. Some groups fled into remote mountain areas, where they began organizing. After the 1996 Peace Accords, which offered these internally displaced persons land and development opportunities, communities were established throughout Guatemala. St. Michael’s is affiliated with 21 of them.

As it has evolved, the project now has multiple roles: It helps fund volunteer Maya health workers in their communities, provides funds to transport patients and health workers from remote locations for treatment, provides medicines and basic supplies, leads small teams to work alongside Maya health workers, and stands in solidarity with Maya self-government.

Coordinating the Guatemala Project is not Abernathy’s only volunteer activity. She has long participated with the migrant-assisting Samaritans. As a member of St. Michael’s Social Action Committee, she has gifted food cards to the Baboquivari District, arranged cash bonuses for food pantry workers, and organized Syrian refugees to make masks and send them to Matamoros. In 2019, she organized a border-wall protest near Sasabe.

The interview with Abernathy was far-ranging: from poets to peace marches; Maya birth defects to entrepreneurs in Guatemala; US temporary worker program; agrarian reform and environmentalism. “I’m interested in everything,” she exclaimed.

Clearly. She has a dazzling, embrace-everything smile.

Guatemala Project co-worker and migrant activist Sarah Roberts is effusive about Ila Abernathy: “She’s an incredible teacher and advocate,” she writes. “And she is always creative. … She truly embodies what it means to accompany, to walk alongside, to listen to, and lift up the voices of marginalized communities.”

The decades-old Book Stop has withstood a recession, crippling construction, a pandemic and now the unexpected death of a co-owner.