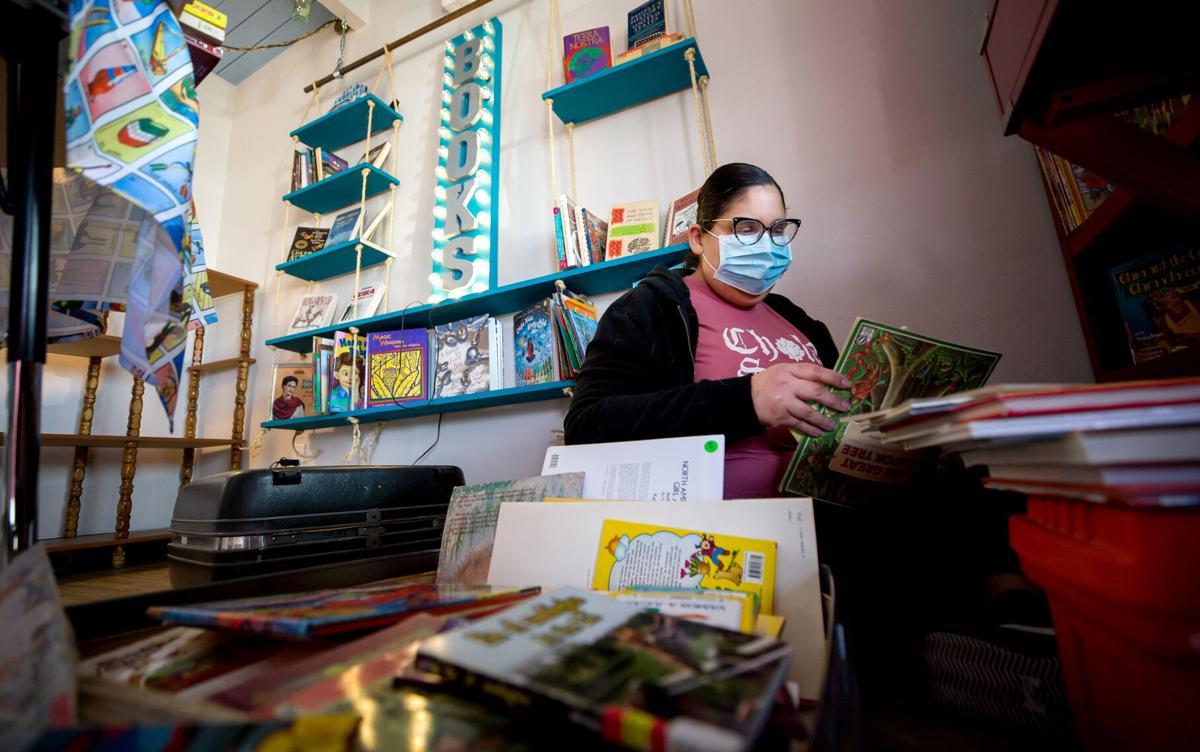 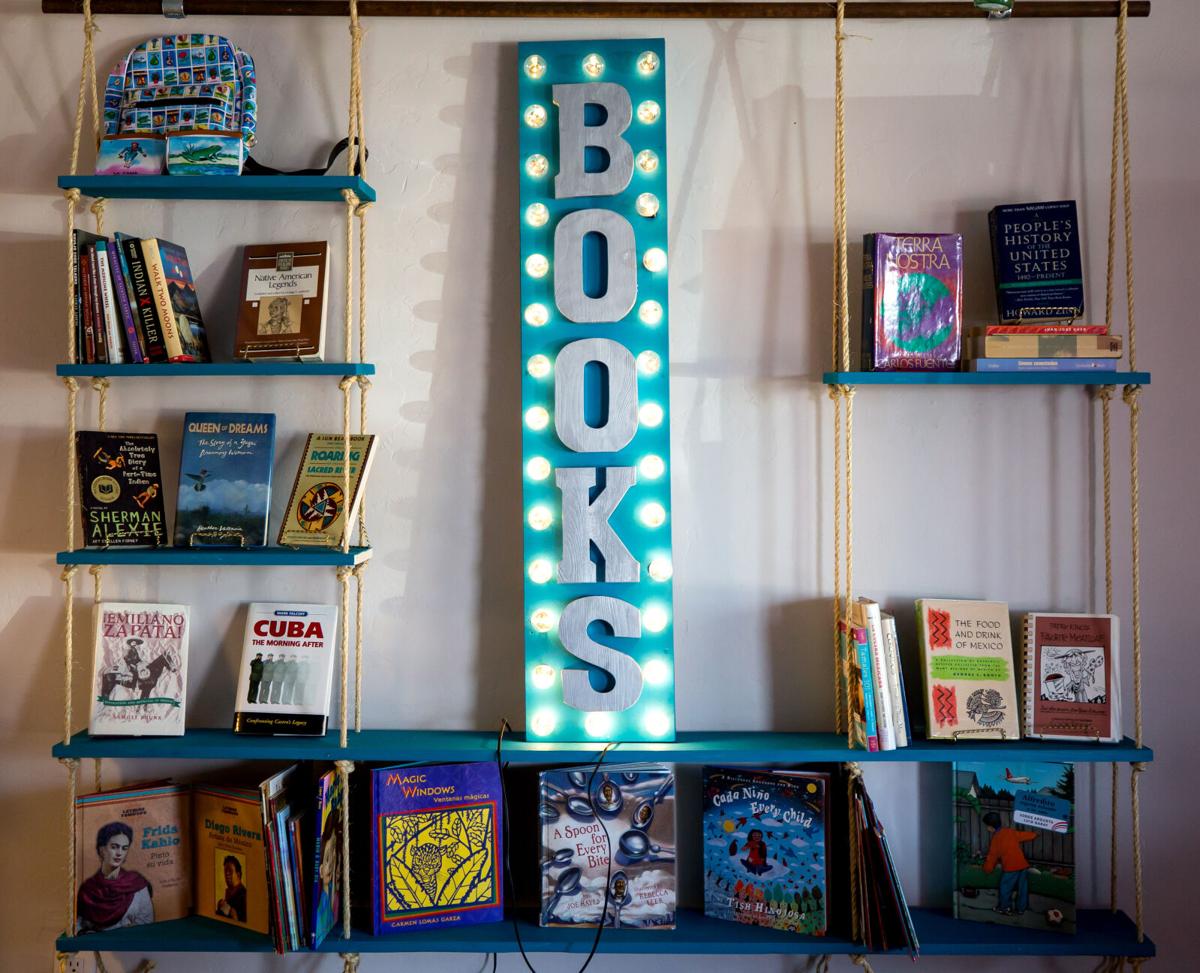 Books are on display around a light up books sign, made by Syrena Arevalo-Trujilo and her husband, inside Barrio Books at Hotel McCoy, 720 W. Silverlake Road. 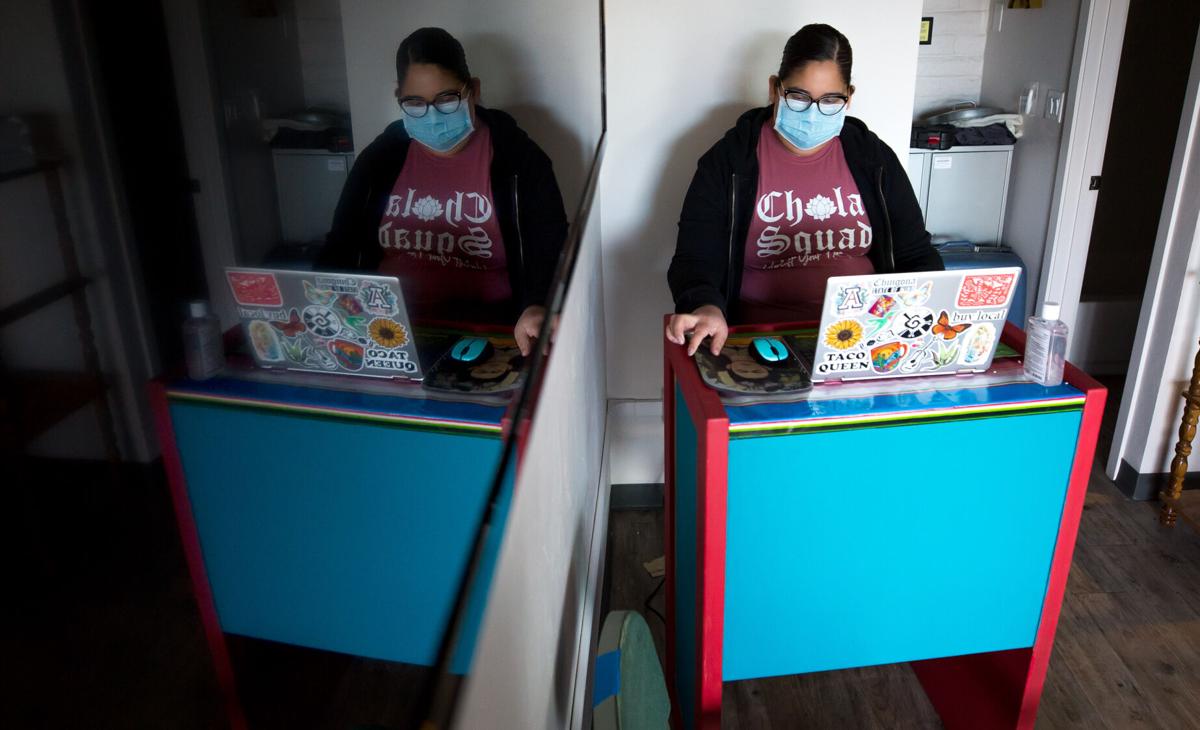 After sorting through books, Syrena Arevalo-Trujilo, owner of Barrio Books, works inside her shop at Hotel McCoy, 720 W. Silverlake Road. 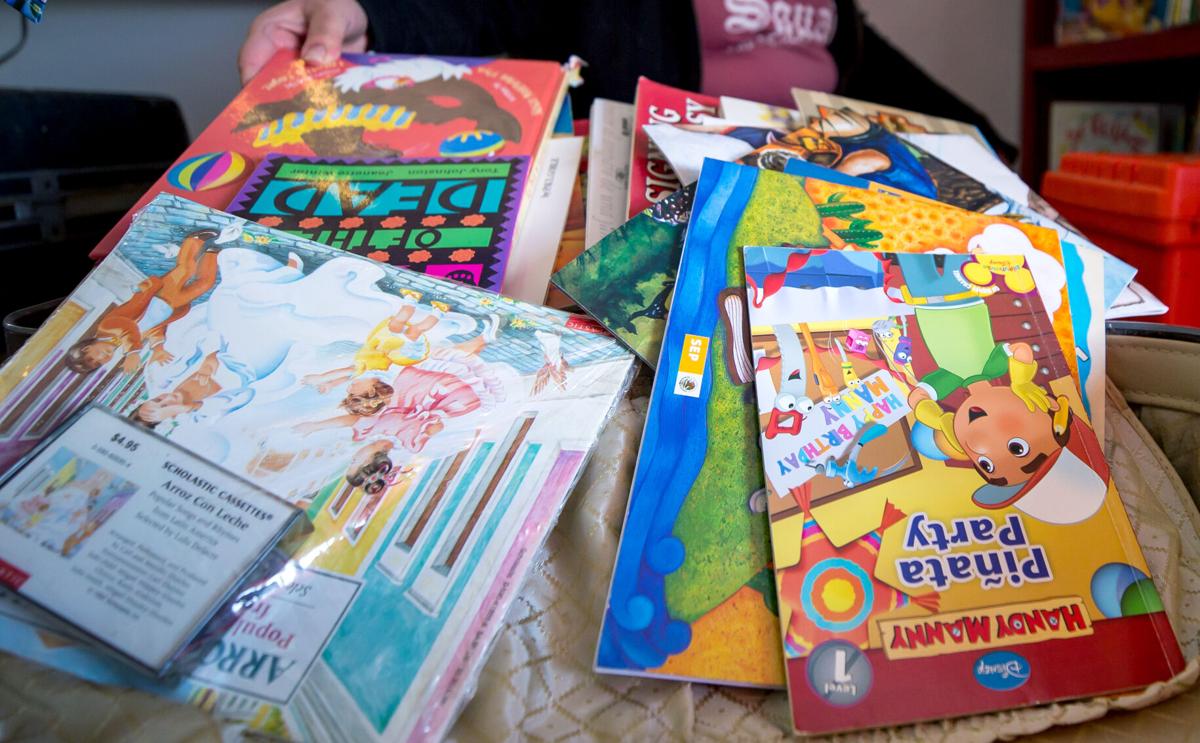 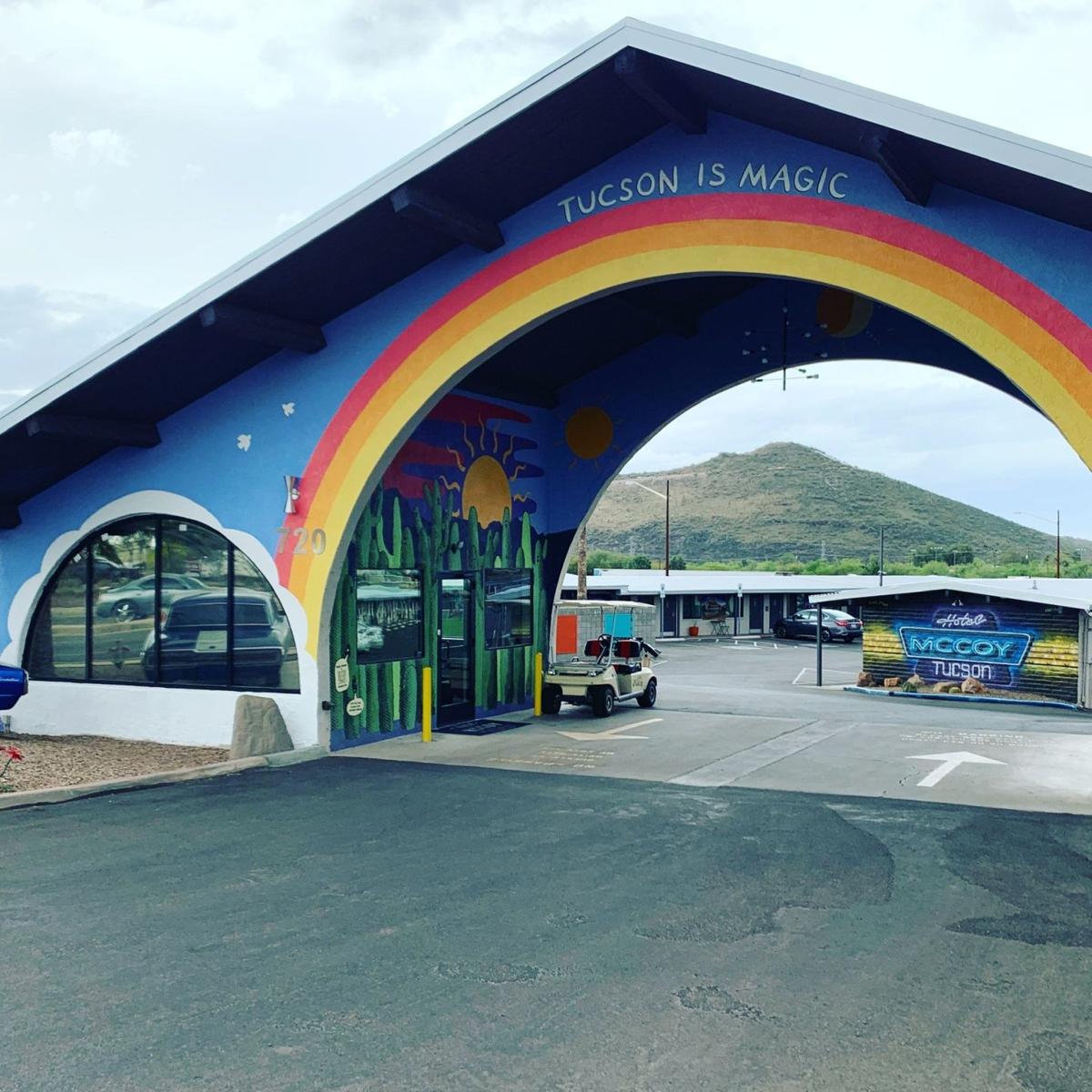 A desert rainbow scene greets guests in the front entryway of Hotel McCoy. The hotel will be celebrating its first anniversary on Saturday, Oct. 5.

When Syrena Arevalo-Trujillo launched her pop-up book shop in the spring of 2019, bringing books in English and Spanish written by Latinx authors to community events, she dreamed of one day having her own brick-and-mortar store.

It was a goal she hoped could be realized in about five years and probably not something that would happen in the midst of the COVID-19 pandemic.

But in her case, the plot twist that's been the year 2020 has fast-tracked those plans and is leading to the happy start of a new chapter in 2021.

Arevalo-Trujillo's concept, Barrio Books, is the first business to be part of a new program launched by Hotel McCoy, 720 W. Silverlake Road, offering rent-free space at the property to entrepreneurs who don't yet have the capital to rent or buy a storefront.

When the store opens on Jan. 2 it will be the only, and very likely the first-ever dedicated bookstore on Tucson's west side  that focuses largely on literature that is representative of the Latinx community.

"It's so unreal for me, (on Monday) we were taking books to the shop and once we started putting books (on the shelves) there, it was like this is happening, these books have a place to stay," Arevalo-Trujillo says.

The Tucson native and University of Arizona graduate has been busy getting ready for opening day, transforming a small, empty hotel room into a cozy bookstore.

All of the furniture and fixtures were either donated or made by Arevalo-Trujillo and her husband, Walter, from repurposed materials. They've made a hanging bookshelf and an illuminated marquee sign and DIY'ed light fixtures from empty Topo Chico bottles and fairy lights.

A lifelong book lover, Arevalo-Trujillo knew how difficult it was to find books that reflected her own culture, and as a former middle school teacher she saw how sharing culturally representative books with her students helped spark their interest in reading and helped them academically.

When she launched her pop-up shop in April 2019, first under the name La Syrena Barrio Books, her goal was to make it easier for readers of all ages to find books that were culturally representative and bring books to parts of the community where places to buy them were few and far between. It was also a way for her to find new homes for her own huge and continuously growing collection of books.

She sold books for adults and children from sarape draped tables and vintage suitcases, or from a papel picado decorated pop-up camping trailer that her family converted into a bookmobile at markets, fiestas and other community events mostly on the south side and often accompanied by her sisters and mom.

"I've been a book lover ever since I can remember and it's gotten me through a lot of tough spots in life, and I was an educator as well and had a lot of students that were going through the same things and reading really helped them — it helped them get out of their own reality and I could see that in them," she says. "And just being able to go out into the community and providing these kinds of books for more people, it's just an incredible feeling."

While out in the community, Arevalo-Trujillo delighted in seeing customers' excitement in finding books they enjoyed as children or discovering new titles with stories and characters they related to and were reflective of their own experiences.

"I loved it and I appreciated that kind of interaction... and I realized there's a need for that kind of resource here and providing representation for everyone," she says.

In July 2019, just a few months after launching her pop-up store, Arevalo-Trujillo, who was diagnosed with pulmonary hypertension about eight years ago, underwent a life-saving double-lung transplant.

"I was out of commission for about six months or so because I was healing and getting myself back on track, but I have an amazing family that continued doing Barrio Books and continued doing pop-ups for me and really kept it going out in the community," she says. "... and once COVID started we kind of fizzled out a little bit because it was a crazy time and we weren't sure what was going to happen."

A few months into the pandemic, Arevalo-Trujillo poured new energy into Barrio Books, revamping the website and focusing heavily on sales through her site and social media. She'll continue offering online sales with shipping and in-store pick up options and plans to add a blog to the site where local writers can share their work.

Arevalo-Trujillo will continue to stock books written by and about the Latinx and Chicanx community, but she'll also add more diversity to the offerings.

"We will still keep carrying books by Latinx authors and stay true to that, but we're also going to expand that by carrying more indigenous authors and (books by) other people of color and bestsellers, too," she says.

The store will also carry books by local authors including self-published works and continue its focus on "giving books a second chance" by selling mostly used books, Arevalo-Trujillo says.

She also has plans for activating the space as conditions allow and making it a hub for both the surrounding community and hotel guests, including a summer reading rewards program for kids, book clubs, storytimes, a book-trade in program and discounts for hotel guests.

Caring for the community

It was Arevalo-Trujillo's commitment to representation in literature and her "vibrant" business plan that made Barrio Books the top choice to be part of Hotel McCoy's community support pilot program, says Nicole Dahl the hotel's general manager and creative director.

The program, which offers rent-free space for businesses just starting out, is the latest way the hotel seeks to support others in the community, driven by Dahl's approach to business which prioritizes taking care of employees and the community above all else.

The hotel, known for its more than 50 murals by local artists, has also had a commission-free gallery for artists since it opened in 2018, and in April created a housing assistance program offering reduced monthly rates for artists and hospitality employees financially impacted by the pandemic.

The hotel has weathered the ebbs and flows of business these last few months and Dahl wanted to find a way to use vacant space in the hotel to give fledgling entrepreneurs an opportunity to grow their business, while also bringing in new, unique amenities to the property that would be attractive for guests.

"I thought we have all these hotel rooms that are empty right now, and yeah they're going to fill up one day... but what can I do with that empty room that would give back to the community and be super cool?" Dahl says.

Dahl, who is also a writer and working on her first novel, knew she wanted the first business to either be a bookstore or a tattoo shop.

Ultimately, the bookstore idea won out and she put a call out on social media inviting anyone who ever wanted to open a bookstore but hadn't had the funds to do so to contact her, she says. A few people tagged Arevalo-Trujillo in the post and she met with Dahl to pitch her business plan.

The agreement between the two businesses is for a minimum of three years and both women are excited to bring a bookstore to an area that's been without one for so long.

"It shows the community that literature is important and that they can find those books of representation closer to them," Arevalo-Trujillo says. "And also with visitors, too, they're not only coming to Tucson, but they're staying closer to South Tucson which has a vibrant and beautiful culture and with Barrio Books we can share that with them," she says.

20 local books to read over your winter break in Tucson

These books include both fiction and nonfiction and all have an Arizona connection, whether that's a Tucson author, Arizona setting or regional topic. These come from #ThisIsTucson's Summer Reading Challenge for Grown-Ups.

25 things to do in Tucson from home, from your car or outdoors this weekend, Dec. 23-27

Things to do this Dec. 23-27 in Tucson, Arizona including virtual events, drive-ins, drive-thrus, open-air events, at-home things to do and things to do with kids.

The Pima County Public Library is closing some branches temporarily to help stop the spread of COVID-19 in Tucson, Arizona. Some branches will remain open for food programs and holds pickup.

Tips on how gardeners can be more environmentally friendly including: avoid pesticides, reduce water use, avoid peat moss, and reuse your nursery pots.

The Southern Arizona Arts and Cultural Alliance wants the community's help to write Letters of Hope for Tucsonans living and working in assisted living facilities or hospitals.

Give the gift of reading to a kid in your life with one of these children's books by Tucson authors. These books explore the Sonoran Desert, feelings, adventures and more.

When Syrena Arevalo-Trujillo launched her pop-up book shop, she did it to connect people wit…

So many local ladies to support!

Starting Jan. 7, free, emergency food boxes can be picked up at the food bank's headquarters, 3003 S. Country Club Road, from 8 a.m. to noon on Tuesdays, Wednesdays and Thursdays.

Things to do this January 2021 in Tucson, Arizona including virtual events, drive-ins, drive-thrus, open-air events, at-home things to do and things to do with kids.